Let me start by saying that I don’t like to bust on other people’s projects. When people talk poorly about my projects it makes me mad, even if I deserve it. With that in mind, understand that I fully support the LEAFXPRO’s right to exist. And I may even be wrong about it being a little silly.

But, if I’m being honest, to my mind it is kind of silly.

At its core, it is an attempt to keep riders dry in rainy conditions, which isn’t terrible as attempts go. Unfortunately, its method of doing this involves attaching a clear plastic sail to the front of your bike. Behold. 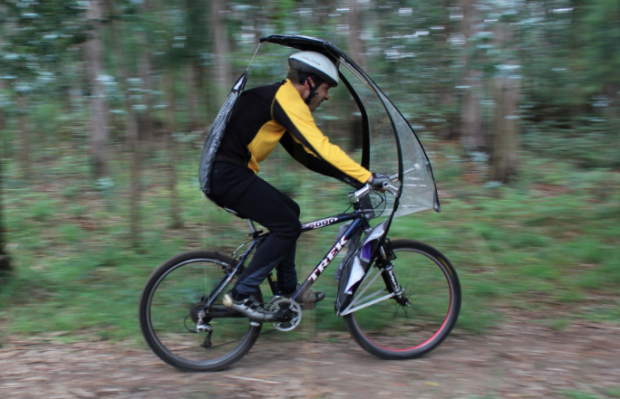 You may also notice that the LEAFXPRO attempts to combat the skunk stripe a wet bike will leave up a riders back by adding a bit of plastic in the rear. Unfortunately–again, and harder this time–this gives the impression that the rider is being given a wedgie by his or her bike.

But the LEAFXPRO doesn’t stop there. There are several models of increasing waterproof-sail-ness, up to and including the Family model.

Am I crazy, or is that kid in a plastic bag? Someone verify that I am seeing what I’m seeing. That’s a kid in a bag, right? I’m no legal expert, but I believe it might be slightly against the spirit of the law to put a child into a plastic bag. I’m sure I read that somewhere.

Hey, I wish the LEAFXPRO and its designers all the luck in the world. I hope they make a million billion dollars via their Kickstarter, which you can find here. But I don’t think I’m on board. I don’t want to put anyone in a plastic bag. Not bikes, not kids, and certainly not myself.

Yes, that does appear to be a child in a plastic bag. And look, the mom has a nice heart print for Valentines day wrapping around her PLUS she can still perform the necessary hand signals while riding.

I’m performing a hand signal too.

Hey, that sail thingy might work really well on a windy day . . . so long as the wind is at your back.

Ah, I hadn’t thought of that! If it’s packable, I could see that being a pretty cool use.

or maybe even a parachute on a jump gone bad

Yeah, Jared, that must be it. Deploy it before heading east along the Missouri and stow it for the return trip!

Works in headwinds too….zigzag on your bike and tack upwind !

I have a similar idea for this pressing problem. I like to call mine “Fenders and a rain jacket.”

I’m trying not to laugh. When I think about itthere be much more frontal area then the rider, but it died look like a sail.