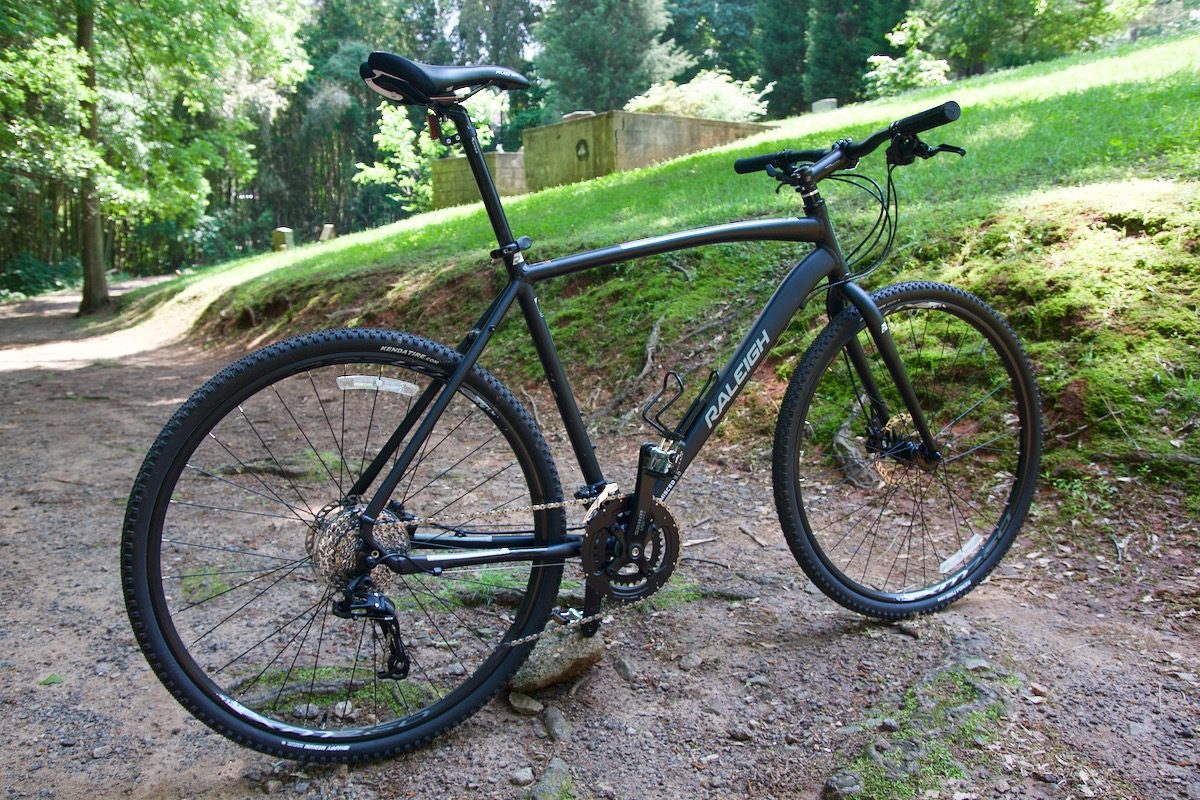 Editor’s Note: While Jeff has been mountain biking since the early 1990s, he still has a lot to learn about mountain bikes. Any opinions expressed in this article are Jeff’s personal opinions, and do not necessarily reflect the opinions of Singletracks.com.

Occasionally when an acquaintance finds out I run a mountain biking website, their eyes get big and they tell me, “I’ve been thinking about getting into biking and maybe riding some trails.” At this point, I know what’s coming next: they want to know which hybrid bike they should buy because, you know, they’re hoping to ride on the road, and maybe some trails too. Not that I blame them. Who wouldn’t want a do-all bike?

The problem, as most mountain bikers know, is that hybrid bikes aren’t really well suited to riding singletrack. Sure, for riding the occasional gravel road or path, a hybrid is just fine. Then again, so is a ‘cross bike or even a gravel grinder, which is the type of bike I would choose if I were buying one bike for on- and off-road use. But I digress.

So here, for posterity, are my arguments against buying a hybrid bike, especially if one’s intent is to have a good time riding singletrack trails.

Hybrid Geometry Is all Wrong for Mountain Bike Trails

And since hybrid bikes tend to appeal to more casual, inexperienced riders, they are often designed for comfort over performance. This means hybrid riders will be more upright than mountain bike riders, which can make bike handling on twisting trails awkward and downright dangerous.

Judging by the stock tires on the hybrid bikes I’ve seen, these bikes are designed for like 90% on-road, and 10% off-road use–and that’s being generous. In fact, these days most companies aren’t even calling these bikes hybrids; instead, they’re “urban” or “city” or “metro” bikes. The tires on hybrid bikes are often considerably wider than those on road bikes, but the tread patterns are clearly optimized for rolling fast on pavement.

My recommendation to anyone trying mountain biking is to start with tires that are at least 2.2-inches wide. If you find a hybrid bike that can fit tires this wide (most are going to come with tires well under 2-inches wide), then maybe–maybe–you could consider venturing out onto trails. Just make sure the wider tires are designed for mountain biking and feature a tread pattern that has some bite to it and decent side knobs.

Yes, I know plenty of really nice people who ride rigid mountain bikes, many of them singlespeed, but let’s be honest: the people who ride those bikes are masochists. In general though, mountain bikers prefer bikes with suspension, preferably front and rear. Unfortunately most hybrid bikes don’t offer any suspension at all. At a really basic level, suspension makes riding bumpy, uneven terrain less painful and more enjoyable.

Not only does suspension make the ride more comfortable, it also gives the rider more control. So instead of getting bounced off the bike when encountering a web of tree roots, riders with suspension will remain planted on the bike and in control.

Hybrid Bikes Must Make Sense for Someone, Right?

Hybrid bikes certainly have their place, but don’t let the name hybrid lead you to believe these bikes are a cross between a road bike and mountain bike. They’re not.

Instead, think of a hybrid bike as a bike for a college student who just needs a reliable and comfortable way to get to class. Hybrid bikes are also a great choice for moms and dads who want to ride around the neighborhood streets with their kids.

But if you’re buying a bike for your own recreational purposes, I beg you to first think about what type of recreation you’re into. If the idea of riding efficiently along quiet, mountain roads appeals to you, get yourself a road bike, even an entry-level one. And hey, if you do decide you want to venture off the pavement, slap on a set of wider, semi-knobby road tires and hit the gravel roads.

On the other hand, if you prefer the idea of riding a bike on unpaved paths through the woods, get yourself a starter mountain bike. You can throw slick tires onto a mountain bike later if you find yourself gravitating toward the paved greenway paths.

Friends, if you want my advice on buying a hybrid bike, here it is: don’t buy one. Decide which type of bike riding you’ll do the most, and buy a bike that’s meant for that type of riding. Only then will you begin to understand why your cycling-obsessed neighbor has a garage full of bikes.

Singletracks
15 Products to Make Riding Gravel Less of a Grind
Videos
Watch: How To Ride Corners FAST
Videos
Watch: Getting a New Mountain Bike at the Lego Bike...
Videos
Watch: Rubber + Rocks + Dirt = Music To My...

Bingo — coming from someone who’s first bike was a hybrid.

It ultimately ended up being a decent commuter bike, but was never used for offroading or serious road rides. The worst of both worlds.

THe stem is WAY! to long…

But then again it IS a hybrid….

Exactly. Steering a hybrid on singletrack es no bueno.

Everything you said, Jeff, is true. These bikes aren’t mountain bikes nor road bikes. Yet it’s a relatively inexpensive way to determine which type of biking a future cyclist into. Most people bought their first bike wrong. That applies to motorcycles as well.
My first bike (that I bought myself) was a department store mountain bike which I replaced with much better mountain bike in a year simply because I had no interest in riding pavement and needed something to handle Singletrack. I had no idea what should I buy until I rode a little that Mongoose bike.
Many people wanna ride in town but not into road bars so as an alternative they buying “flat bar road bike”.
My friend bought hybrid for his wife because mountain bike was too hard for her to pedal but she can ride hybrid with less effort even on easy Singletrack with him occasionally.
I’m not defending Hybrids as a smartest purchase. Just saying that there’s a niche for such bikes, just not on a mountain bike trails.

In doing some research on hybrid bikes, it sounds like hybrids were originally conceived as a mix between a road and touring bike. Not sure how people came to think they were part mountain bike, but this historical explanation seems to make sense, given how closely to road cycling these bikes still skew.

Interesting article, I first rode single track on a hybrid bike (long before I could afford a real mountain bike) and it was truly awful. I agree wholeheartedly about the tires and geometry. For me, the worst part was the gear setup. It had three MASSIVE chain rings up front and a microscopic cassette in the rear which made climbing a nightmare. When I rode my real bike for the first time I felt like I could climb all day thanks to the improved cassette. If there is one positive I can draw from the use of hybrid bikes for MTB it’s this: It got me (and I’m sure many others into mountain biking). If I didn’t have that Murray hybird in my garage when I was a kid I would have never been introduced to MTB and most likely would not be here today.

I am going to defend the hybrid, I got a scott sub30 about 10yrs ago when I started biking ( its a great bike). At the time I didn’t like the feel of drop bars, didn’t have 1500 to drop on a bike, and liked the flat bars for crowded nj roads. I thought I would upgrade after I proved it was more than a phase, but i still love that bike and have yet to be dropped by any road bike friends (fitness is still he best upgrade). At this point, if I have 2k or more to spend on a bike, it will be a mountian bike, big money on a road bike just doesn’t pay and my hybrid keeps me in shape when the trails are wet. I never thought of taking it off road, but I do appreciate its versatility to do toe paths and gravel roads. I am often surprised that more mtn bikers don’t use a hybrid for road training as it mimics the mtb more closely.

I am going to defend the hybrid, I got a scott sub30 about 10yrs ago when I started biking ( its a great bike). At the time I didn’t like the feel of drop bars, didn’t have 1500 to drop on a bike, and liked the flat bars for crowded nj roads. I thought I would upgrade after I proved it was more than a phase, but i still love that bike and have yet to be dropped by any road bike friends (fitness is still the best upgrade). At this point, if I have 2k or more to spend on a bike, it will be a mountian bike, big money on a road bike just doesn’t pay and my hybrid keeps me in shape when the trails are wet. I never thought of taking it off road, but I do appreciate its versatility to do toe paths and gravel roads. I am often surprised that more mtn bikers don’t use a hybrid for road training as it mimics the mtb more closely.

Can’t ride any bike except a mountain bike off road: Jobst Brandt.

I think it depends where you’re at. The best “metro-urban-trail” bike in Alaska is a fatbike 🙂 For now my hardtail is my all around, and I cant imagine buying a hybrid. I think their design is obsolete, and it makes them, as you said, the worst of both world.
Maybe when I’m 80 and just scooting around city park.

Best quote of the article is the section title “You’re Going to Hate Riding Off-Road Without Suspension”. I can’t tell you how many serious off-road cyclists I know that started with hard-tail MTBs and eventually migrated to Full Suspension. If your singletrack has any natural features like rocks, roots, and trees its going to be downright painful to ride a hybrid briskly around that trail.

I can also speak from experience here. I have a cyclocross bike set up with 2-inch tires for riding dirt roads in the winter. It works great but sometimes the narrow tires bog down. I decided to build up a Niner carbon hard-tail with a rigid carbon fork for wider tires. That really rocks the the double-track, dirt roads, occasional gravel, and hard-top connector roads.

Of course, I have tried both of these bikes on the local single-track. There is one 2-mile section that is super-smooth where I can reach some higher sustained speeds (15 mph vs. 12-14). But this section is unusually smooth because the forestry service drug out all the vines and roots when they cut the trail. For the remaining six miles of the 8-mile loop I’m constantly out of the saddle, lifting up the front, and trying to find better lines around the roots and rocks. By the time I’m done with the first lap my wrists are aching. Luckily I bring out the full-suspension bike on these attempts and go back to enjoying the ride, instead of suffering through it.

If you plan to ride medium-to-hard on the trails a hybrid might disappoint.