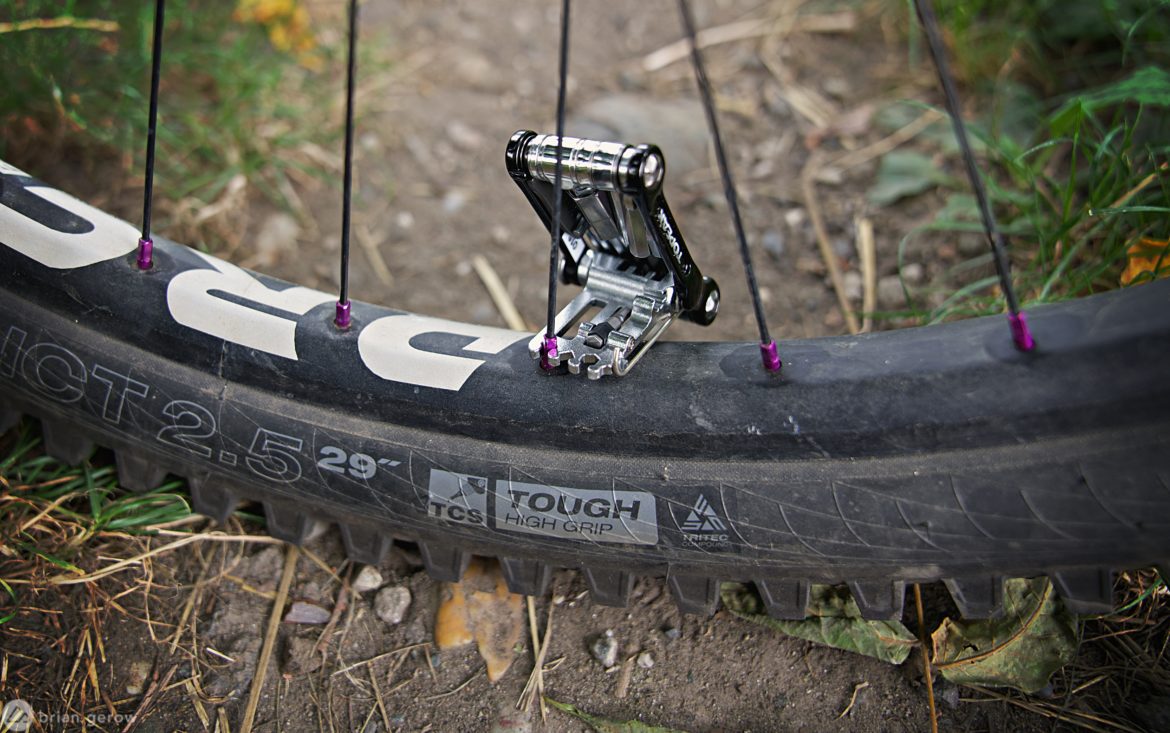 The spoke wrenches cut into some multi-tools are there for a good reason. If a spoke snaps, the rim dents or bends, or a nipple works loose, you may need to repair it before continuing on your way. If you carry the correct size spoke wrench that fits the nipples on your wheelset it just might save you from a frustrating walk.

Riders can often roll ride home with a broken spoke or bent rim, but once the tire starts rubbing the frame you will have to attempt a repair. Left to rub, a tire can wear through your paint and eventually cut a hole through your frame. That mistake will not be covered by most warranties. While “trail truing” the wheel by smacking it on the ground might work, It’s better to use a spoke wrench first, as it is less likely to further damage the rim and spokes.

Once you’ve determined that your tire is rubbing and you need to rectify it, follow these steps to attempt the repair. You may not have a phone connection to reference this article on the trail, but you can test these steps on a bent wheel at home to get the idea.

It is important to first understand the basic physics related to your wheel. In its most rudimentary form, the rim is held straight (or true) by the spokes that create a triangle with either side of the hub. The amount of tension on the spokes, and their precise lengths, determines how the rim will align with the frame and how straight it will be. These factors also affect how round the wheel is, but that is a topic for another day. Spokes are tensioned against each other and depend on one another’s tension to function properly, so loosening or tightening one of them will affect all of the other spokes.

With your bike upside down, grab a pair of spokes on either side of the wheel and squeeze them together. Continue squeezing pairs of spokes together all the way around one side of the wheel. This will help you determine which spokes are loose, which are overly tight,  and if any of them are broken. Next, do the same to the spokes on the other side of the wheel. Though spoke lacing styles can vary greatly, the important part is that you make sure to check every last spoke to determine which of them are out of balance. The spokes on the driveside of a rear-wheel may have higher tension than those on the disc side by design, and leading vs. trailing spokes will have different tensions, so it is best to focus on whether the spokes are balanced and make note of overly loose or tight spots.

If you find a broken spoke, remove it from the nipple and hub so that it doesn’t get caught in the drivetrain, or continuously smack the frame. If you are unable to remove the spoke, wrap it several times around an adjacent spoke to secure it for the ride home.

Mark any loose spokes by wiping the dirt off of them, or drawing a line on the tire’s sidewall to indicate which spokes are loose.

With the bike upside down, place a thumb (or stick) on the chainstay that the tire is rubbing and carefully move your thumb toward the rim to determine exactly where the wheel is out of true, and in what direction. Most often, the rim will be out of true where the loose spoke is located and will wobble toward the frame in the opposite side of where that spoke is anchored into the hub. In most cases, tightening the spokes that attach to the hub on the side opposite the wheel’s wobble will fix this problem.

Now let’s tighten up that loose spoke and start to pull your wheel back to the rideable direction. If the spoke is super loose, tighten it just to the point where it stops wiggling around. From there, tighten the spoke by turning it in quarter revolution increments to the left (as shown above), spinning the wheel between turns to see if it has pulled away from the frame enough to ride home. You don’t need to perfectly true the wheel, as that requires precise tools and a dash of patience. Simply pulling it away from the frame will allow you to ride without further damaging your frame, and you can throw the wheel in a truing stand after you arrive home.

If the spokes that you are adjusting become notably tighter than the others on the same side of the wheel, you may have to loosen the spokes immediately next to them that are connected to the other side of the hub. This detensioning will allow the force you have added to the original spokes to pull the rim in the direction you want it to go.

Any rider who has been playing on technical trails for a few years has experienced a wonky wheel, and maybe a rubbing tire. What are some of your tips for trailside truing?