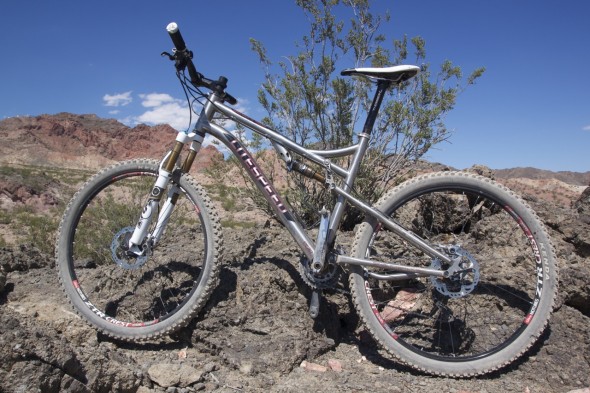 I’ve always been a fan of Litespeed bikes: lightweight, simple, and in many ways, just plain elegant. This week I got a chance to throw a leg over the Sewanee full suspension mountain bike and here’s what I learned.

For those who aren’t familiar with Litespeed, they’re a small company based near Chattanooga, TN, and they deal exclusively in titanium bikes fabricated in-house. Despite having a limited line of mountain bikes, the company offers not one, but three 650b models: the Sewanee (full suspension), Pisgah (hardtail), and new for 2014, the Citico. All three models can also run 26″ wheels, thanks to an eccentric bottom bracket. 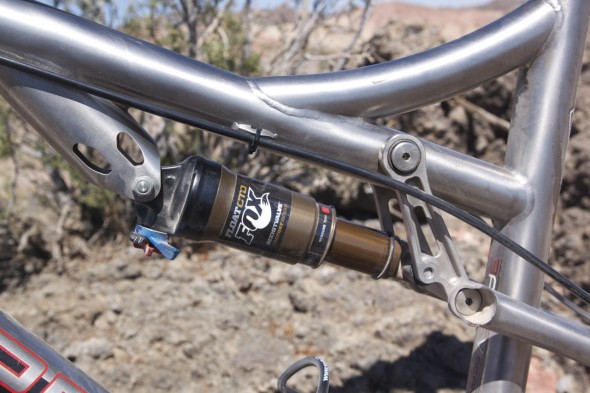 The Sewanee offers 90mm of rear travel and is designed with an 80-100mm fork in mind. That places this bike solidly in XC territory, which isn’t a common use-case for 650b bikes these days… but somehow it still works.

Last year it seemed everyone at Interbike was talking wheel sizes, and 650b was the big buzzword. But somehow that’s all faded in just a year’s time–once again, it’s all about ride feel. So for my Sewanee test ride, I really looked at the bike as a cross-country machine rather than a new-ish breed of mountain bike. Despite my personal preference for 29″ wheels, I found myself really appreciating the cross-country cred this bike exudes: stiff and responsive, with just enough squish to sustain epic saddle time. 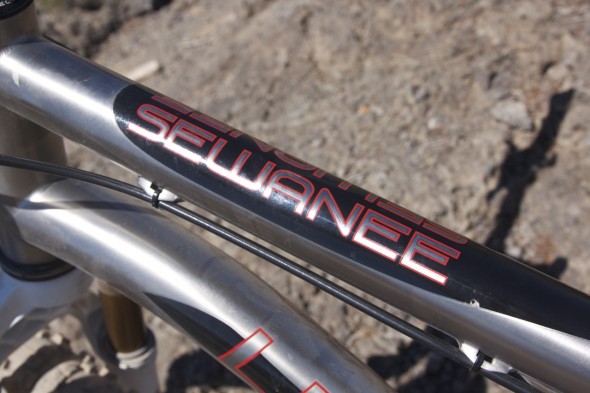 Halfway through my test ride I stopped to snap photos of the Sewanee and I was really impressed with the handmade quality throughout the frame. Virtually every piece of metal attached to the frame is titanium, including the rocker. (The replaceable rear dropout is aluminum.)  As you would expect, this is a lightweight bike, yet on the trail it didn’t feel fragile in the slightest.

In an increasingly carbon fiber MTB world, Litespeed is staying true to its titanium roots while pushing into new territory with 650b (27.5″) models. But forget the wheel size and frame material debates–just find the bike that fits your trail personality!

Litespeed is also selling carbon bikes now, though I think only road bikes so far. The carbon bikes are made overseas.

They definitely know their titanium though – they designed and fabricated a lot of the chassis for the Mars Rover!

Supper cool bike. I may be a long way off from that though. What kind of price points do they have? They must have a cool Manufacturing facility. I remember hearing that the old Soviets had an enclosed shipyard with inert gas for fabricating their Ti hulls (Alpha’s I think)

Ti bikes aren’t cheap. I didn’t get the official MSRP but the frame is available online at BikeBling for $3600 with shock. BikeBling lists the MSRP at $4200.