GPS units are getting smarter and more powerful every year, and while some mountain bikers are starting to use smartphones to record tracks and navigate trail rides, brands like Magellan and Garmin still have a few tricks left up their sleeves!

The top-of-the-line Garmin Edge 1000 crams an incredible number of features into a package that’s just the right size for handlebars plus, unlike a smartphone, it’s rugged enough to take a few spills. The Edge 1000 comes preloaded with Open Street Map (OSM) data which allows the unit to route riders on both roads and bike paths (though it’s not really clear if paths = trails).

One feature that really caught my attention is the ability to automatically generate–and then navigate–loop routes based on distance and a starting point. Say you want to go out for a 25-mile ride; the Edge 1000 will offer you up to 3 loops to choose from, including a preview of the elevation profile along each route. I could personally use a feature like this–I’m sick of riding the same road loop from my house every time. My road bike is for training, not blindly exploring, after all. Save that for the mountain bike. 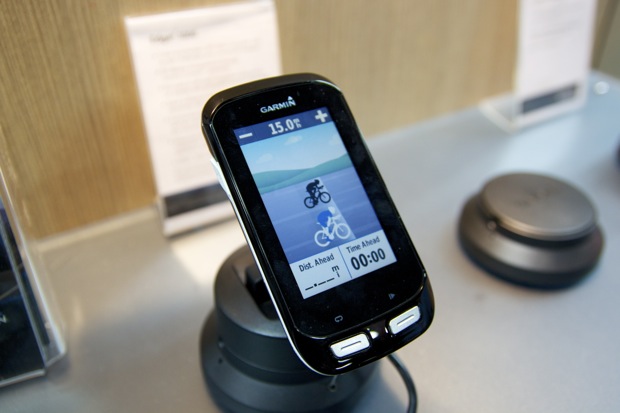 For the virtual cycling competitors out there, the Edge 1000 allows you to grab segment data from Garmin Connect (and potentially Strava?) so you can see where you stand during the ride. There’s even a screen where you can watch your progress relative to the KOM holder to make sure you stay on pace (or to see just how quickly he/she leaves you in the dust, as the case may be).

The Edge 1000 also features a ton of connectivity options with smartphones and additional sensors like heart rate monitors, power meters, etc. You can even use the Edge 1000 as a remote control for Garmin’s VIRB helmet camera. 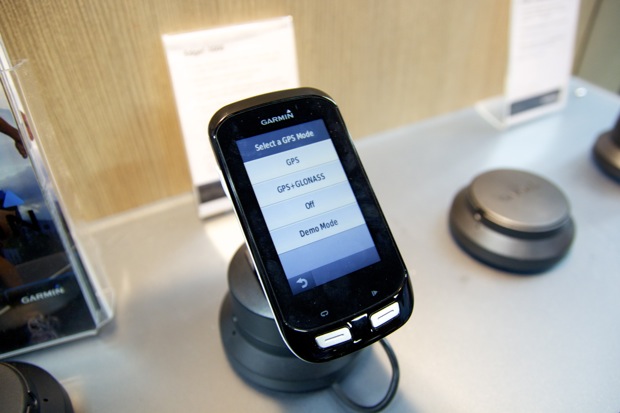 With all these whiz-bang features, it’s also interesting to note that the actual GPS tracking part is as good as ever in the latest Garmin cycling units. In addition to GPS satellite support, the Edge 1000 can also connect to GLONASS, the Russian satellite location network, for maximum accuracy and coverage.

I also got a chance to look at Garmin’s latest wearables (watches, that is) including the Fenix 2 which I hope to test out on the trail soon. Trust me, the iWatch has nothing on the GPS watches I saw from Garmin. 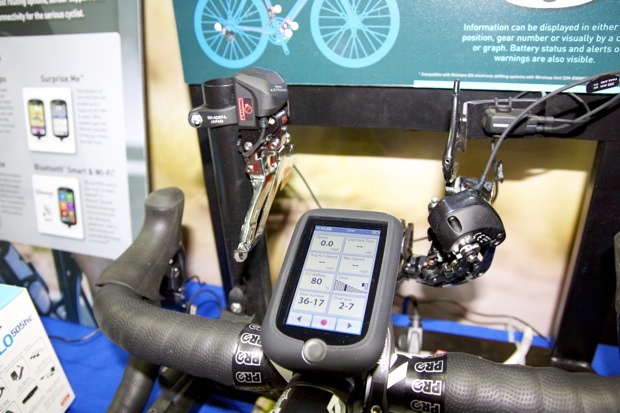 Magellan announced the Cyclo series of cycling-specific GPS units earlier this year and I got my first chance to get hands on with the Cyclo 505 at Interbike last week. This GPS unit itself is sleek, lightweight, and features a responsive touchscreen with just a single button for simple operation on the trail.

Simplicity seems to be a guiding principle for the Cyclo, with each screen and menu optimized to show only the information you need, when you need it. Like the Edge 1000, the Cyclo is bundled with OSM maps (which are excellent and quite comprehensive, by the way) and features smartphone connectivity, allowing you to preview texts and phone calls right on your GPS. You can even use the Cyclo touch screen to switch tracks on your smartphone playlist. 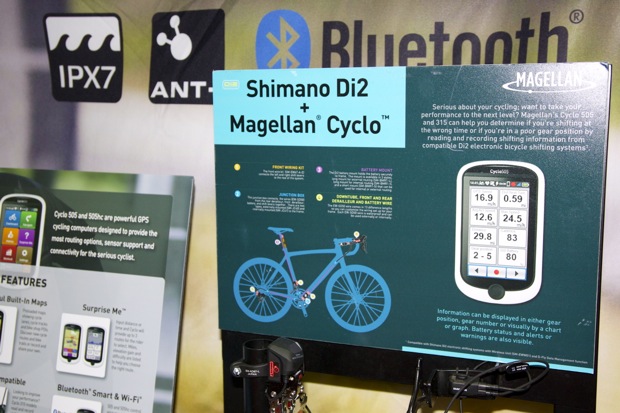 Not only that, but the ANT+ compatible Magellan Cyclo was the first GPS unit to integrate with Shimano’s Di2 electronic shifting platform. You can use the Magellan head unit to display your current gearing plus it lets you know if you’re shifting at the wrong time. How’s that for a connected world? 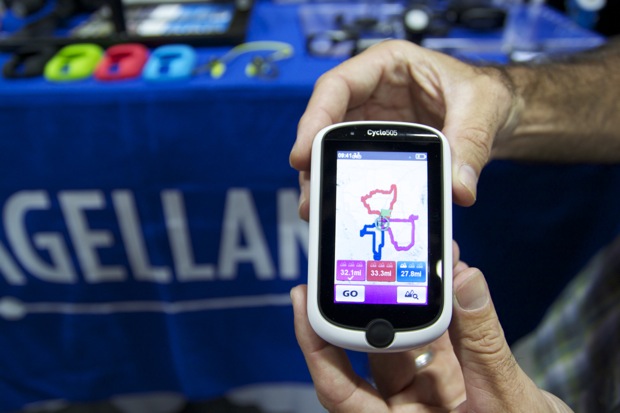 The Cyclo also allows you to generate suggested routes right on the GPS unit by entering a target distance or time. Based on your profile (age, riding ability, etc.) the Cyclo offers up to 3 different routes of varying difficulties for you to select. I’m personally really interested to see how/if the Cyclo uses OSM trail data when it comes to real-time routing.

Garmin and other GPS manufacturers have been using ANT+ for years to connect to various bike sensors but I’ve often wondered: couldn’t they just use Bluetooth (which millions of smartphones include) to accomplish the same thing? The answer is not really.

ANT+ devices use less power, in part because they aren’t constantly connecting to a “master” unit and in practice, you’ll notice that pairing ANT+ devices is a whole lot quicker and easier than Bluetooth. No one wants to sit around at the start of the ride to wait for all their devices to sync up, anyway. ANT+ also allows more devices to be connected at once than Bluetooth, which starts to crap out once you get up to half a dozen connections or more.

ANT+ devices are limited in the amount of information they can send, which is why you won’t see ANT+ in GoPro cameras anytime soon. There are ANT+ dongles for smartphone connectivity, though hopefully one day we’ll see both ANT+ and Bluetooth baked right into our phones so we can keep tabs on all our electronic bike systems! You don’t have any electronic bike systems? Don’t worry–in the future, we won’t be able to avoid them. 🙂

I’ve been using the Garmin Edge 1000 for about 8 months. I really love it. I use the 24K topo maps that I already had for the GPS I use for hiking. I also have been using the magnet-less sensors for speed and cadence. I sued to kick the old style and it would become misaligned and I would have to mess with it to get it to work again. The new ones just work. I thought I wouldn’t use the phone call/txt options because we go out into the woods to get away from all of that, right? However, since my mother is in poor health I try to keep an ear out for the phone. I like that I can see who is calling me and if I need to stop, I can, otherwise I just let it ring. You can see who texted you and decide if it is important enough to check. I get weather warnings for the area I am riding. I haven’t ever had the battery low warning even on all day rides. I love to travel and see new parts of the country and having the GPS map of the places I have been is inspiring for me.