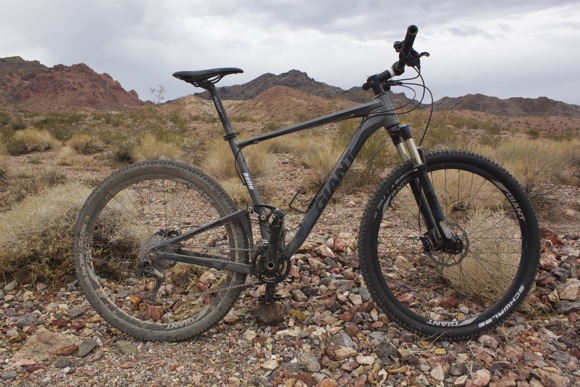 Branding is a powerful thing. Most of us don’t want to admit it or perhaps we’re not even aware of it but when it comes to mountain bikes, something as simple as a name can influence our opinion about a bike. Admittedly my perception of Giant mountain bikes has been that they’re heavy and clunky (don’t ask me where I got this idea I own a carbon Giant road bike that I really like). So coming into my test ride of the Giant Anthem X 29er I assumed the bike would be a beast on the trail (and not in a good way). And once again I was wrong. 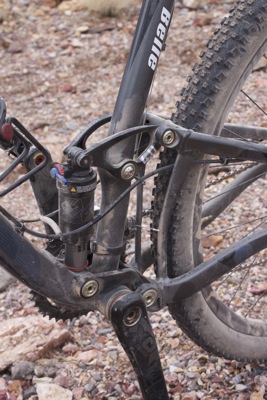 The Anthem X is a full suspension 29er with 100mm of travel front and rear and a full aluminum frame. The SRAM X0 build that I rode was lightweight and seemed to be almost on par with the carbon 29ers I rode during the day. The stealthy paint job and muted components scream “surgical strike.”

Climbing up the road to the start of the demo course was a breeze but otherwise unremarkable. In fact I could have done the same climb on my hardtail 29er and wouldn’t have felt much difference. The suspension was responsive through dips and transitions but where it really shined compared to other FS 29ers I tested was on the short, steep stingers along the course at Bootleg Canyon. Even slightly out of the saddle on those short climbs the Anthem X delivered without feeling overly twitchy on the descents.

Just one year ago I couldn’t name a single FS 29er that I enjoyed riding but for 2012 companies like Giant seem to have found the sweet spot with XC-style bikes like the Anthem X. Models are priced at around $3,800 MSRP from your local Giant dealer. This is a fun bike to ride and one that won’t leave you completely worn out at the end of an epic day on the trail.

“Just one year ago I couldn’t name a single FS 29er that I enjoyed riding ”
That’s ironic seeing as Giant didn’t change anything but components on the Anthem from ’11 to ’12. 😀

Seriously though, Giant really did a nice job with the maestro suspension, and their geometry is always pleasant to ride.

Ha- I didn’t get to ride the Anthem until this week!

Is it me or does that rear triangle look really small? It could be because of the 29inch wheel but it looks like they took it off a 26inch frame and attached it to work. Along with that, the seat tube is just one huge lever over the rear suspension putting more strain on a small compact assembly below. I’m a Giant fan but I’m not sure about his one. Just my 2cents

Actually, if I remember correctly, the chainstays on the Anthem X are one of the longer ones out there. I think the angle of the seat tube is what makes it look odd to your eyes. A number of other companies bend the seat tube to make room for suspension movement so it’s not really a “Giant only” thing.

Yeah, the rear triangle does look small – and for 29ers that’s a good thing. Frame designers work hard to shorten the chainstays on 29ers so they don’t have that big bike feeling, making them more agile on the trail.

The Anthem has one of the longest chainstays of any 29er out there at the moment. The rear triangle is fairly compact, but that makes it stiff. It looks especially small on that bike ’cause it’s (I bet) an extra-large size frame. The rear triangles are the same on all sizes, it’s front triangles that are different.

Yeah, the Anthem X 29er has one of the longest chainstays in the 29er world.

The design itself is almost identical to that of my Trance and I LOVE it.

The frame pictured is an extra large.