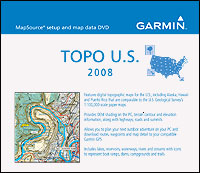 Out of the box most Garmin recreational GPS units can’t even help you find your way out of the trailhead parking lot. To get true navigational data like landmarks and topography on your GPS you’ll need to purchase MapSource Topo software for your PC, but the question is, is it worth the investment?

First the good stuff. MapSource Topo is not as expensive as you might think – just over $70 on Amazon.com for the 2008 USA edition. This gives you topo data for the entire country and it’s a steal compared to programs like National Geographic Topo that make you buy each state individually. And unlike National Geo that can only be used on your computer, MapSource maps can be transferred to your GPS so you can take your maps with you on the trail.

MapSource includes all the features most folks will need when working with GPS data – including the ability to cut, combine, and create tracks plus edit and delete individual waypoints and trackpoints. You can even view tracks and waypoints in Google Earth using a simple menu command, though the green triangles that mark your track points are super annoying (you can turn these off in Google Earth). MapSource allows you to export your data in GPX format which is super helpful for transferring GPS data to other programs. Overall Garmin opted to keep things simple and the features they included are useful and solid. 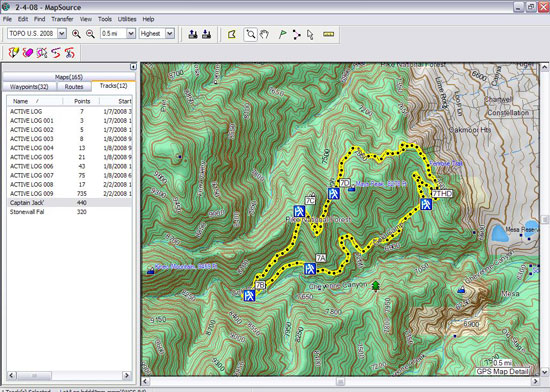 MapSource also allows you to filter your GPS track data in a number of ways. It turns out that many Garmin GPS units like the GPSMap 60Cx limit the number of track points a single track may contain to 500 points. This means if you’ve downloaded a mountain bike track online you’ll need to filter that track to less than 500 points so it will fit on your GPS no matter how much available memory you may have. The MapSource filter does this automatically, taking out unnecessary points while retaining the overall shape of your track data.

Now for the bad stuff. MapSource seems to be inconsistent in recognizing USB connected Garmin GPS devices. I generally have to connect and disconnect my GPS from the computer several times before MapSource even recognizes the device and only once was I successful at accessing my GPS’s internal memory card. MapSource (like Garmin Training Center) won’t let you save a single track in GPX or any other format- you gotta save all the tracks from you GPS in a single file. Speaking of Garmin Training Center, MapSource can’t import those files making MapSource virtually incompatible with the current Edge GPS series (the forthcoming 605 and 705 should address this). GPX import is touchy and MapSource requires your files to be just right for it to read them; after some tweaking singletracks.com GPX data is now MapSource compatible.

On the topo side of the equation the maps are good and have decent detail but things like roads are tough to make out due to the thin lines and a lack of contrast. You can change the color of GPS data including tracks and waypoints to make them stand out but other features (like roads and topo lines) cannot be modified. And don’t expect to find any trails already mapped for you in MapSource – coverage is limited to roads so you’ll need to get your trail data elsewhere. (hint hint)

Overall MapSource is a solid program that works as advertised and gets the job done. For Garmin owners this is really your only choice so if you want Topo maps on your compatible GPS MapSource is the best (and only) way to go.

Community
Riding all the Bikes With Vincent Tupin [Video]
Culture
News: Montana Enduro Series Announces 2015 Tour Stops
Progression
Video: How to Use a Dropper Post for XC, not...
Culture
News: MTB Clinics for Women (The Stronger Gender) with VIDA...