Editor’s note: This review was first posted in August of 2005 on our sister blog at TripleBlaze.com and has been updated with mountain bike specific information.

I purchased a Garmin Forerunner 201 in 2005 to use for running and to possibly use on my bike. I had been using a Garmin eTrex for mountain biking for a few years and I was excited at the possibility of using a single GPS unit for both running and biking. Unfortunately the Forerunner did not entirely fit the bill as it was much better suited to running than biking. 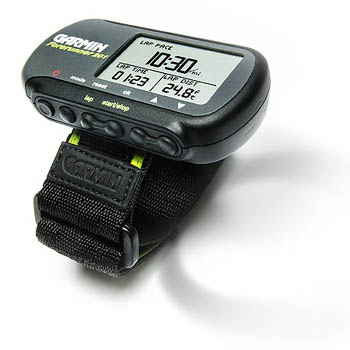 First off, let me just say it’s great to have a GPS device that is small enough and convenient enough to run with. I saw a GPS wrist watch a couple years back so I knew it was possible to put GPS electronics into a small device but I didn‚Äôt know how much data I could really get from a tiny watch LCD screen. The Forerunner actually seems kinda big for a ‚Äúwrist device‚Äù and I found it nearly impossible to wear on my wrist while mountain biking as it made it difficult to bend my wrist. For runs, however, it doesn‚Äôt seem to be overly cumbersome and even has enough screen real estate to show a decent map.

The data you can view during your ride includes speed, pace, time, and distance traveled, all on one screen. You can even create custom screens to watch things like the grade you‚Äôre riding, the time of day, altitude, and more. You can also view data on your past runs and rides, see maps of where you‚Äôve been, and even back track on a run or ride to estimate your time to completion. The controls are quite good and pretty easy to manage while running and biking. The screen is large too so you don‚Äôt have to squint just to see what‚Äôs happening on screen.

Garmin pitches this as a device you can use for running or cycling and they even make a bike mount bracket so you don‚Äôt have to wear the Forerunner on your wrist while you tear up the trails or the road. The antenna in the Forerunner seems to be pretty weak as it loses satellite signals fairly often on my trail rides and even during runs on neighborhood streets with thick tree cover. I‚Äôve found the best way to keep a good signal is to stick to the absolute middle of whatever path I take (including running in the middle of the street in my neighborhood when I get the chance!). I‚Äôve also found the strength of satellite signals changes throughout the day due to the positions of the satellites themselves; some routes get great data in the morning but have a tough time in the evening. It will take some experimenting to find the optimal time and path for each of your rides and runs.

The overall accuracy of the Forerunner is also suspect. I‚Äôve heard from some people who assume the Forerunner overestimates distances since the navigation accuracy can be off by up to 50 feet or more at any given time. These slight inaccuracies add up over the course of your run and can lead to an overestimate of your total run distance. I tend to argue that these inaccuracies can also be underestimates and in the end perhaps they cancel each other out. The other thing that affects accuracy, and in my opinion, has a much greater effect, is the built in error correction. When my eTrex loses a satellite fix, it typically treats the distance you travel without a signal as not having been traveled at all. That is, say you are at mile 1.5 and the unit loses the satellite signal. You ride (or run) for about half a mile with no signal and then pick up the signal again at exactly the 2 mile mark. The eTrex will say your distance traveled is 1.5 miles while the Forerunner will attempt to guess (it might say you‚Äôve been 1.87 miles). As far as I can tell the Forerunner makes it‚Äôs guess by drawing a straight line from the point where it lost the satellite signal to the point where it reacquired the signal. So if you‚Äôre running in a perfectly straight line, this estimate should be right on. But if you‚Äôre moving around a curvy trail, the Forerunnner will miss the real distance you covered by making all those turns. You‚Äôll even be able to see this on your map as an odd-looking straight line section. Because of this I often add up to 10% to the distances the Forerunner reports, depending on the availability of the satellite signal and the direction of the trail. The error correction that the Forerunner uses is, in my opinion, still much better than the eTrex since the Forerunner at least TRIES to guess where you were when the signal cut out. I just wish there was more documentation about how the unit actually works.

Finally, I find the software the Forerunner uses to be only mildly helpful with plenty of room for improvement. Like many electronic devices today, computer interfaces seem to be an afterthought to product development. I understand there may be some third party applications and websites that make good use of the Forerunner data but I haven‚Äôt used them myself. The most annoying thing I‚Äôve found is that when you attempt to export the data from the Forerunner Logbook application you have to export your entire log to a single file. Fortunately Garmin has chosen to use XML to store the data (although not quite GPX compatible) but it is still tough to work with a single file that holds hundreds of miles of data. The Forerunner 201 uses a clunky, slow PC serial connection which is another big disappointment. The rechargeable battery is good and tends to last at least 10 hours between charges.

The Garmin Forerunner 201 is a good start to a GPS enabled running/training device but it still has a ways to go. Perhaps in the future Garmin could actually hire runners or bikers with experience using these types of devices to work out some of the obvious kinks. The Forerunner is great at taking some of the guesswork out of gauging distances and pace and is a good way to take advantage of the latest in outdoor fitness technology.

If you found this review helpful and are interested in purchasing a Forerunner 201, show us some love and purchase this GPS (or another) from Amazon through this link.