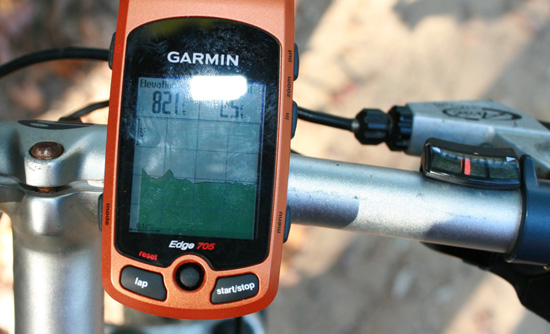 The Edge 705 cycling GPS from Garmin promises it all: detailed, full color, road and topo maps; accessories for intense ride data collection; navigation and directions; ride elevation profiles; and much more. But does the device live up to the hype? We decided to test it the only place it all matters: on the mountain bike trail.

The small size and shape of the Edge 705 make it the perfect GPS for mounting on your handlebars. The quick mount system allows you to clip and unclip your GPS yet still keeps the unit safe and secure on washboard trails. Reading the Edge 705 in glaring sunlight is no problem thanks to the brilliant 2.2″ diagonal color display and there’s even a backlight for epic rides that go a little longer than expected. The new Team Garmin-Chipotle colors should have fans excited but unless you already have an orange or blue bike I say stick with the plain black original.

Before you can head out to the trail you’ll need to load up the Edge 705 with detailed maps of the area you’ll be riding. Two things you need to know:

1. Detailed maps are NOT included with the Edge 705. If you’re riding on the road and want Tom Tom-style turn-by-turn directions and navigation, you’ll need Garmin MapSource City Navigator software (about $100). For trail riding I recommend Garmin MapSource Topo (also about $100). MapSource Topo won’t allow you to create point-to-point directions on your GPS like City Navigator but it does include detailed road maps to help you get oriented. Sounds confusing, huh? Unfortunately it is.

2. You can’t fit maps of the entire US on your device at once. This may not seem like a big deal since most riders stick to trails within their state or region but if you’re planning that big trip out to Moab, be sure to load the detailed basemaps up before you head out! Believe me, I speak from experience here.

The distinction between base maps and trail maps on a GPS may seem strange to first-time users so here’s one way to think about it: base maps are like your old paper folding maps with roads and official points of interest marked. You can’t edit the map since it’s already printed but you can ADD to the map with your own hand-drawn lines and labeled points of interest. The drawn lines in this example are called “tracks” on a GPS while the labeled points are called “waypoints.” All of this is to say: now that you have your base maps loaded, it’s time to get a trail (track) to follow.

The Edge 705 makes it easy to load tracks from you computer and there are actually a few ways to do this. If you’re using MapSource or Garmin Training Center software, simply select the track and choose “Send to Device.” Otherwise, just plug the Edge 705 into your computer’s USB port and your computer will usually recognize the GPS as a data drive (even on a Mac!). Just drag track files to the GPX folder and that’s it! Both of these methods work great for trail files downloaded from singletracks – sweet.

The Edge 705 also allows you to wirelessly exchange trail data with other Edge 705 users via the built-in ANT+ wireless technology. Though I didn’t get a chance to try this feature out, it appears to be pretty straightforward and can be a good way to swap epic routes with mountain bikers you meet on the trail.

The Edge 705 does a great job at helping you follow trails you’ve loaded via computer or wirelessly. Of course you can follow the map visually but that’s usually tough to do on tight, technical trails that require your undivided attention. So, in addition to on screen cues and the map itself, the Edge 705 can be configured to beep when you’re approaching a turn or intersection to get you attention. In our tests this worked pretty well, though on super twisty trail sections the beeping got a little annoying, especially when there was only a single, obvious trail to follow.

Road cyclists clearly had a big influence on the design of the Edge 705 and that influence really shows in the accessories line-up from Garmin. The heart rate monitor felt comfortable and syncs quickly with the GPS. Other accessories like cadence and power meters are mostly worthless to mountain bikers (unless you’re stuck inside on a trainer) and fortunately the base Edge 705 package leaves these doo-dads out. Hopefully in the future we’ll see MTB-specific accessories that use the ANT+ system (G-shock impact meter or a hang time calculator perhaps?).

The Garmin Edge 705 is a whole lotta GPS in a small package and the best part is you can just set it and forget it most of the time. It’s a great choice for trail navigation and MTB training data collection – just remember to look away from the screen every now and then when you’re on the trail 😉

Good information…..I have had my Edge 705 for about 2 weeks…..I find it very easy to navigate and upload/download using GarminConnect website…….thanks for your article with all the information you provided…..Jerry (Cannondale Rush 7)