In some ways this wasn’t really a fair fight: The Titus Racer X is a carbon frame bike, the Ellsworth Truth is aluminum; the Racer X I rode had XTR components while the Titus was SRAM; the Titus fit well and the seat height on the Truth was a little low. But these are both great cross-country bikes and depending on the build they are basically in the same price range making this comparison an interesting exercise at the very least. 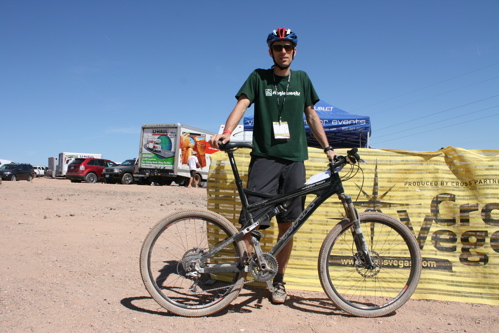 Confession: I’m a bit of a weight weenie (I prefer the term gram counter) and it’s one of the big reasons why I still ride a hard tail mountain bike. The Racer X Carbon lives up to its billing as a super light weight bike and I’m pretty sure the thing weighed less than my Trek 7000 hardtail. The bike practically propelled itself up the hills and I found myself blasting past stronger riders with very little effort. The Truth wasn’t a heavy bike either and on washboard sections the slightly higher weight seemed to keep the bike in better contact with the trail.

Though it’s not always fair to judge a bike based on its components since they can be changed out, I have to mention the XTR shifters on the Titus Racer X Carbon gave me a bit of trouble. The bike made a constant grinding sound through most of the gear range and I found the shifting mechanism to be a bit clunky and confusing. The Ellsworth, on the other hand, performed well and gave a very smooth ride.

Now, for the painful part: pricing. Both of these rides are very high end mountain bikes and their prices reflect that. Of course component group choices dictate price to a large degree but expect to pay up to $5-$6K for a complete bike.

Riding a full suspension mountain bike is a bit of a change for me and I really loved the fact that I didn’t have to be as picky about my lines. If I were to buy a FS cross country rig (and had loads of money) I think I’d have to go with the Titus Racer X Carbon mostly based on the weight savings. Stay tuned for more full suspension bike reviews here and in the MTB Review section of singletracks.