At the end of February, a collection of bike industry veterans sent a new project, Revel Bikes, into the world with a trail and all-mountain bike. Revel Bikes licensed the Canfield Balance Formula suspension platform from Canfield Brothers, configured it on a new carbon frame design, and put their own signature and details into it. 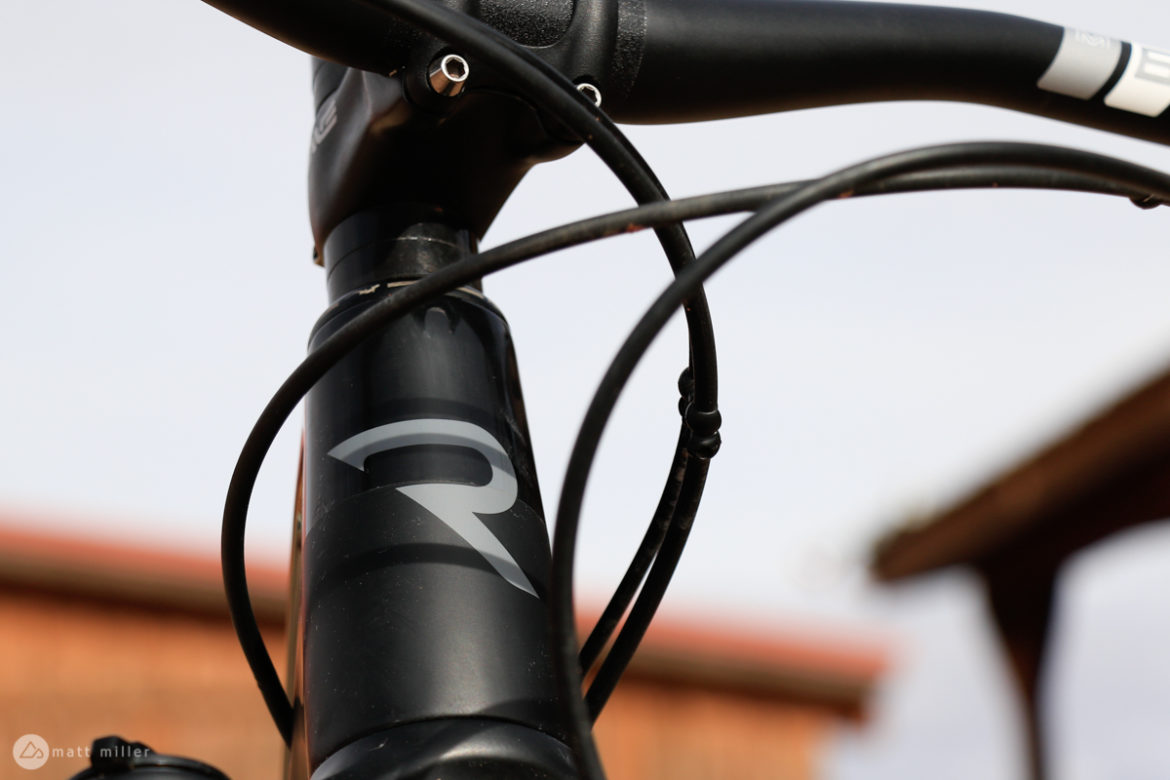 The stand-out feature on Revel Bikes is of course the Canfield Balance Formula suspension. Story has it that Adam Miller — who also started the titanium hardtail brand Why Cycles, and fat bike brand Borealis — was in the market for a full-suspension bike and rode a Canfield Brothers bike.

The CBF suspension wowed Miller thanks to its pedaling characteristics at a time when the system was relatively unknown. Canfield focuses on the gravity audience primarily and only offers aluminum frames. But Miller thought, with the suspension platform on a carbon frame, they could build a serious carbon mountain bike that pedaled and descended much differently than a lot of other brands. 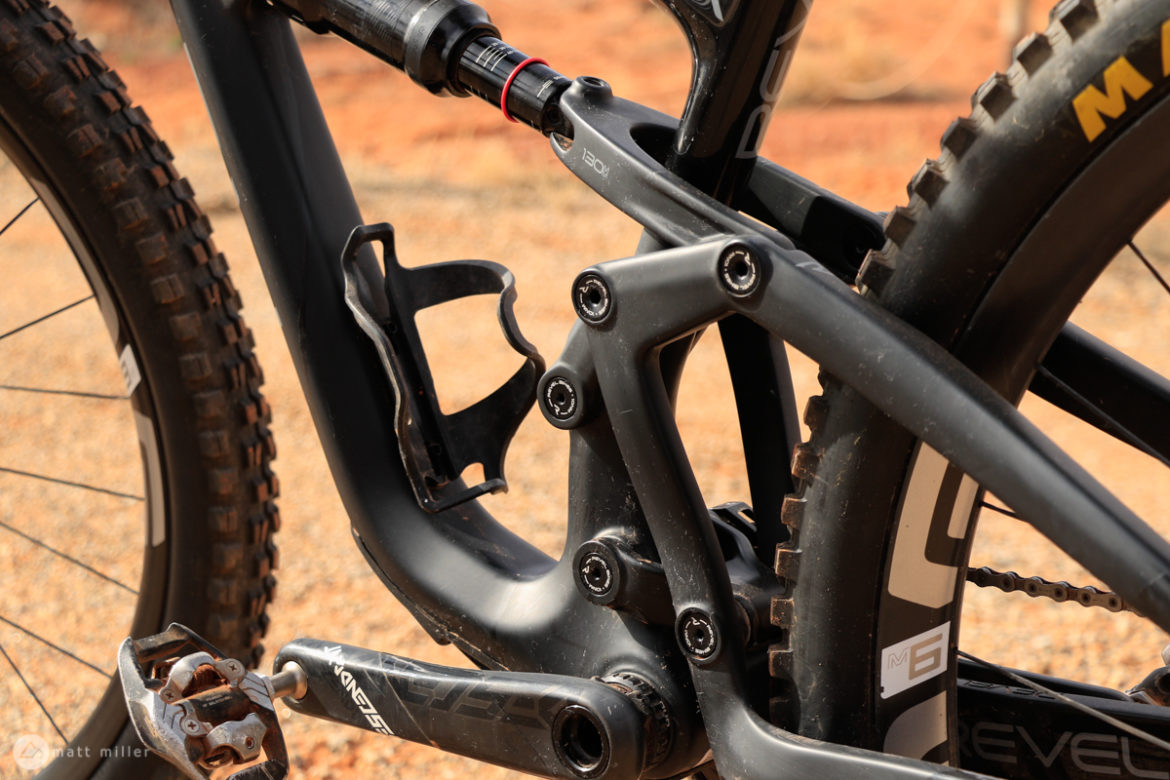 The instant center — where the rear axle is — constantly shifts on mountain bikes throughout the rear shock’s stroke on multi-link bikes, causing the rear wheel to leave the perfect arc rotation. Generally, only single-pivot designs can offer a perfect arc but they lose out on a lot of other beneficial suspension characteristics.

Canfield and now Revel use CBF because it places the center of curvature directly over the chainring, which points pedaling forces into the instant center, wherever the bike is in its travel. The result is a very efficient pedaling platform that is still sensitive to bumps when it’s climbing, or bumps when it’s braking. The kinematics don’t change under different sag amounts or travel either.

That’s a lot of engineering jargon to wade through, but keep reading because I’ll do my best to explain why it matters and how it translates on the trail. 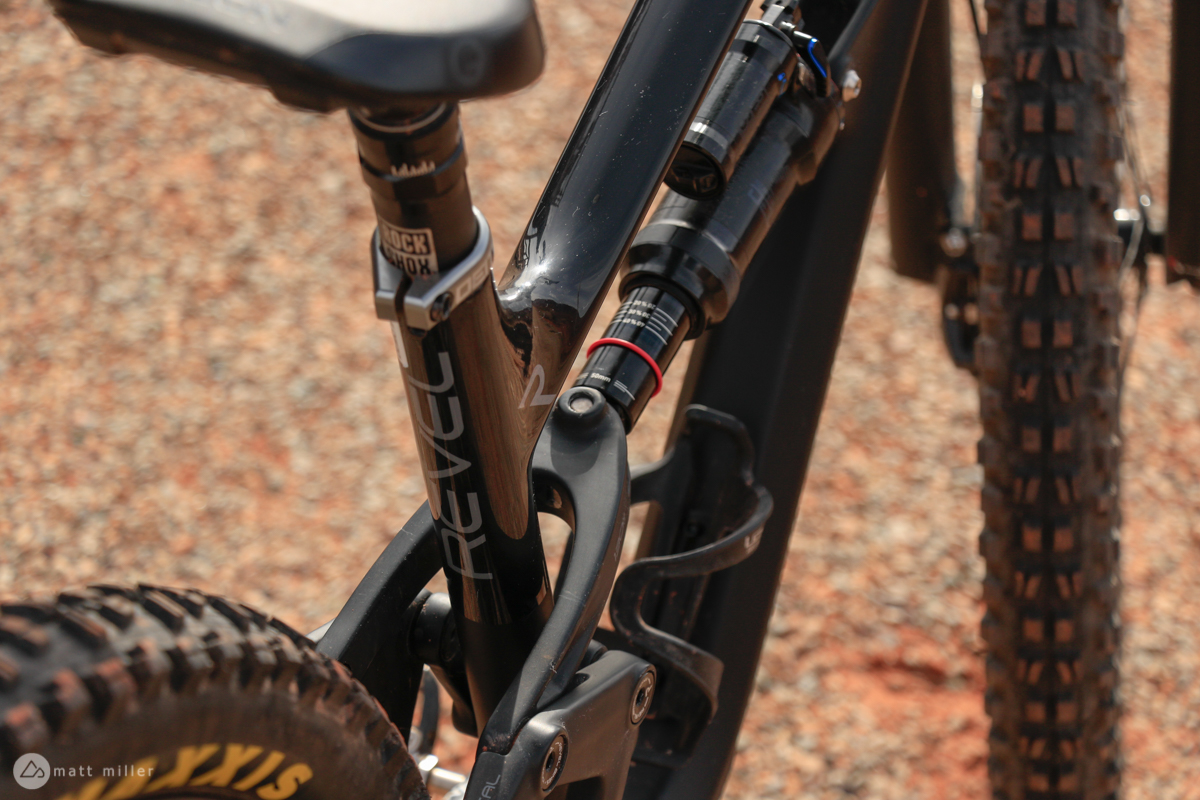 I took the Rascal out for a ride around the Bar M and Sovereign trails in Moab for a few hours. I’m 5’8″ and the medium-sized Rascal felt like a perfect fit. The low standover height and comfortable geo made me feel like I was fitted to a 27.5-inch bike with enhanced roll-over capability.

The 444mm reach also felt comfortable. I found the bike easy to yank up on, and not too long, and the 75-degree seat angle put me in a centered and tall position, but not more than I needed to be.

My buddy (who also rode a Rascal) and I pedaled out on what ended up being a mix of singletrack and loose dirt bike trails. The first thing I noticed was how eager the Rascal is to pedal its way through anything, whether it’s layered slick rock or soft soil. 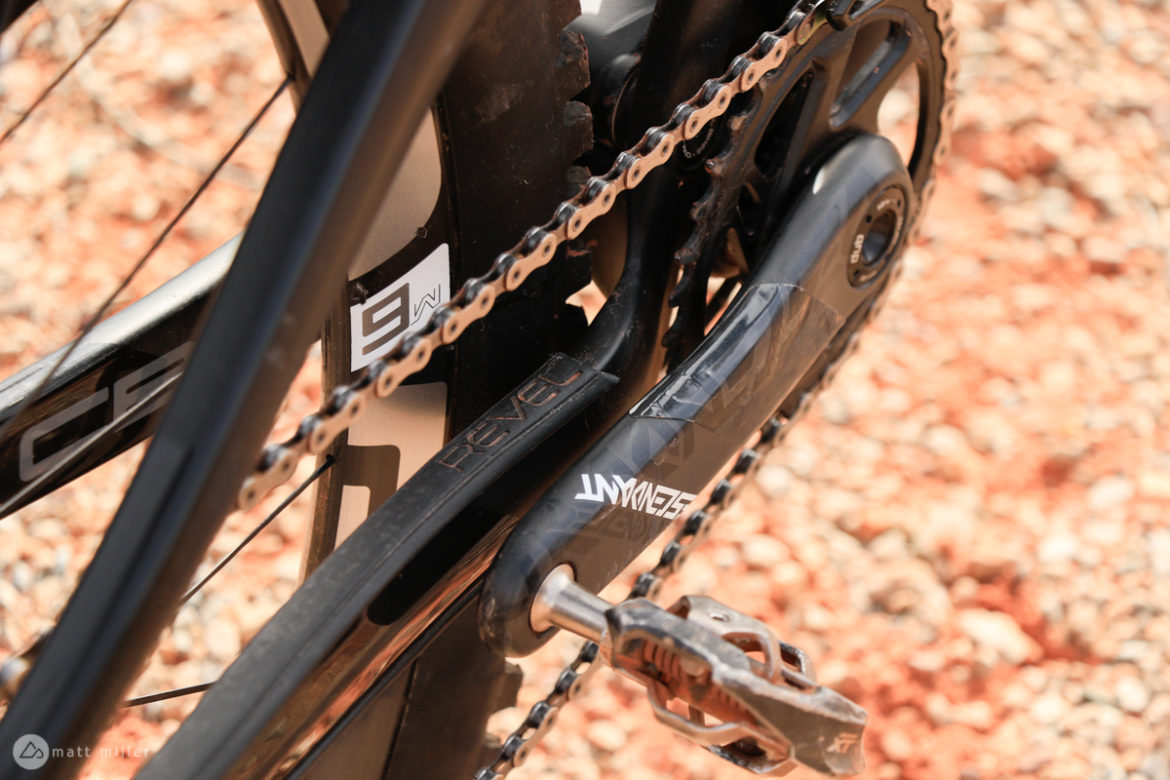 The Rascal has an exceptionally firm platform feel. With the cranks turning, the anti-squat of the bike is strong and every pedal stroke makes its way into the drivetrain and the rear wheel. And, even though the Rascal’s suspension firms up with pedaling input, the rear wheel cupped every rock ledge on the way with incredible traction. The suspension felt like it put every calorie of my energy into turning the rear wheel, no matter what surface it was on.

I know there’s kind of a craze around using the rear suspension in open mode all the time. I think if there’s a switch that will enhance the pedaling efficiency of a bike, it’s crazy not to use it. But the Rascal is the first bike I’ve ridden that doesn’t actually seem to suffer pedaling around in open mode. I switched it to closed on some longer doubletrack, but other than that, I left it wide open when climbing singletrack and it was awesome.

Descending the Rascal was just as fun as climbing on it. Revel says that speccing the Rascal with a 140mm fork was an afterthought. It turns out the extra travel doesn’t hold the bike back when climbing, and makes for a stiffer and more confident front end. I shot down some steep, chunky sections of trail and got a feeling that the Rascal could hold its own in really technical and tough trails.

The Rascal tracked well in corners and berms and popped up off of rocks and little kickers. I also got it up to speed on a few sustained drops and the bike felt as composed as it did anywhere else.

The Rascal left me impressed in every situation I encountered along a 15-mile route with chunky Moab rock, soft and sandy doubletrack, and a few big drops.

At a starting price of $5,000, it’s obviously not an entry-level bike, but personally, I feel like it’s probably worth every penny. And that isn’t an easy feeling to get from such a short amount of time on a bike.

Man there is a ton of pivots on that thing!

Which build did you ride? XX1 Eagle ENVE Kit? If so, did you have a chance to ride the $5K model as well?

Yeah, the one I rode was pretty specced out. Probably 8K plus, with XO Eagle, ENVE and what not. The $5K model comes with I-9 wheels, a Crank Brothers dropper, GX Eagle, a DVO fork, and Guide R brakes. So a pretty solid build kit on a unique carbon frame.

They are a direct-to-consumer brand? Why can’t I find they’re website?