Utah based bicycle company Fezzari has been around for a long time, but it seems like the industry and the public have really taken notice over the past year.

Fezzari has been growing, receiving rave reviews, and their sales have snowballed, sending the direct-to-consumer bikes into the limelight and casting them as a major contender in the bike biz.

Other publications have raved about the La Sal Peak, Fezzari’s enduro 29er, but the Signal Peak has largely flown under the radar. The Signal Peak is a 120mm front and rear travel 29er with cross-country efficiency and handling for trails that are a few notches above a typical XC race. 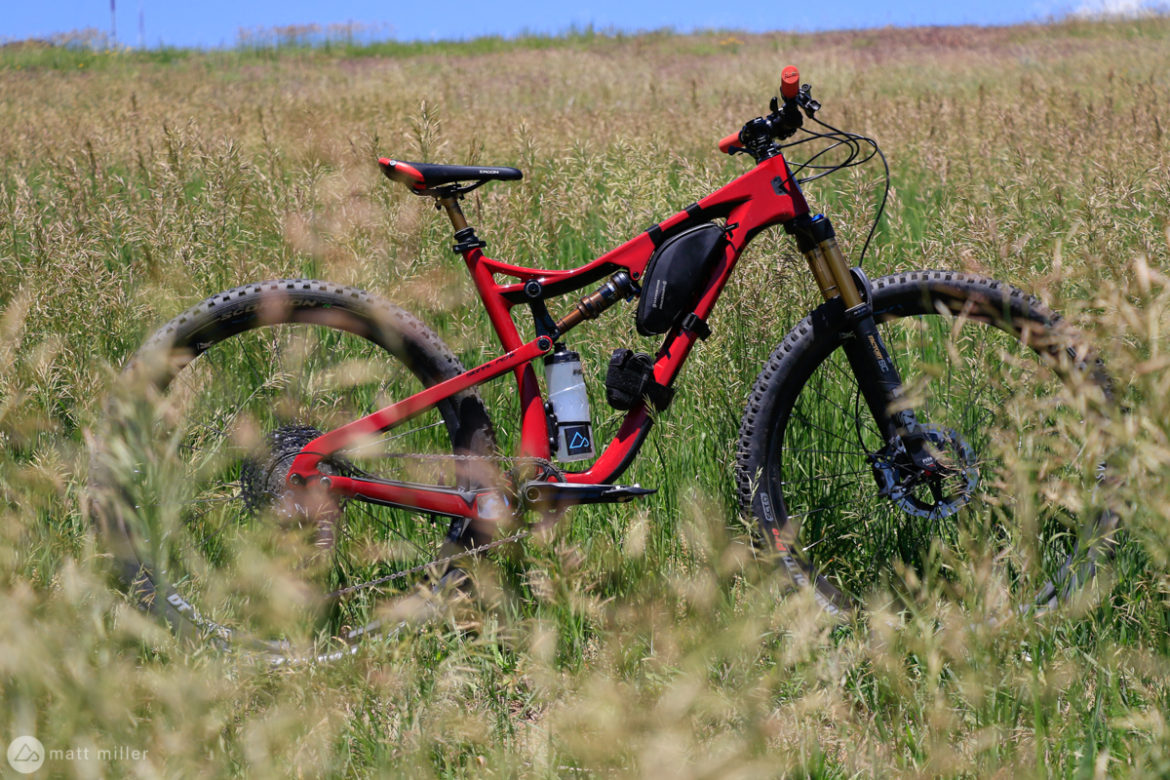 When I started thinking about a bike I wanted to review and ride in the BC Bike Race (BCBR), the Signal Peak was on my short list. BCBR isn’t a typical cross-country race, so the last thing I needed was something with an old-school, steep head angle and a flexy fork. The race is seven days, each day in a different community and on a different trail network. The stage race starts in Vancouver and makes its way up to Squamish, with big climbing days back to back, and technical, rooty tracks that lead riders downhill.

Based on my own research, BCBR media, and talking with several people who have raced or completed in the past, I’d need something with more capability than the usual short-travel 29er.

Even though the Signal Peak came specced out with a premium kit from Fezzari, it made sense to equip the bike with several other review parts that have come in, and really put them to the test for the weeklong ride that covers almost 200 miles, most of which is singletrack.

The Signal Peak looks like the bike to do it on, and to quote Tyler Cloward from Fezzari, “this bike was made for BC Bike Race.”

The Fezzari gets a little more travel than a traditional XC bike, and really progressive geometry. A 68-degree head angle slacks out the front, which isn’t unusual these days for short-travel bikes, but the 75-degree seat angle is quite steep. The medium I’m riding also gets a roomy reach at 446mm with 430mm chainstays.

In the cockpit, I’ve trimmed the Race Face Next R bars down to 760mm with a 50mm stem, and I threw on Fabric’s new FunGuy grips in a color-matching red. 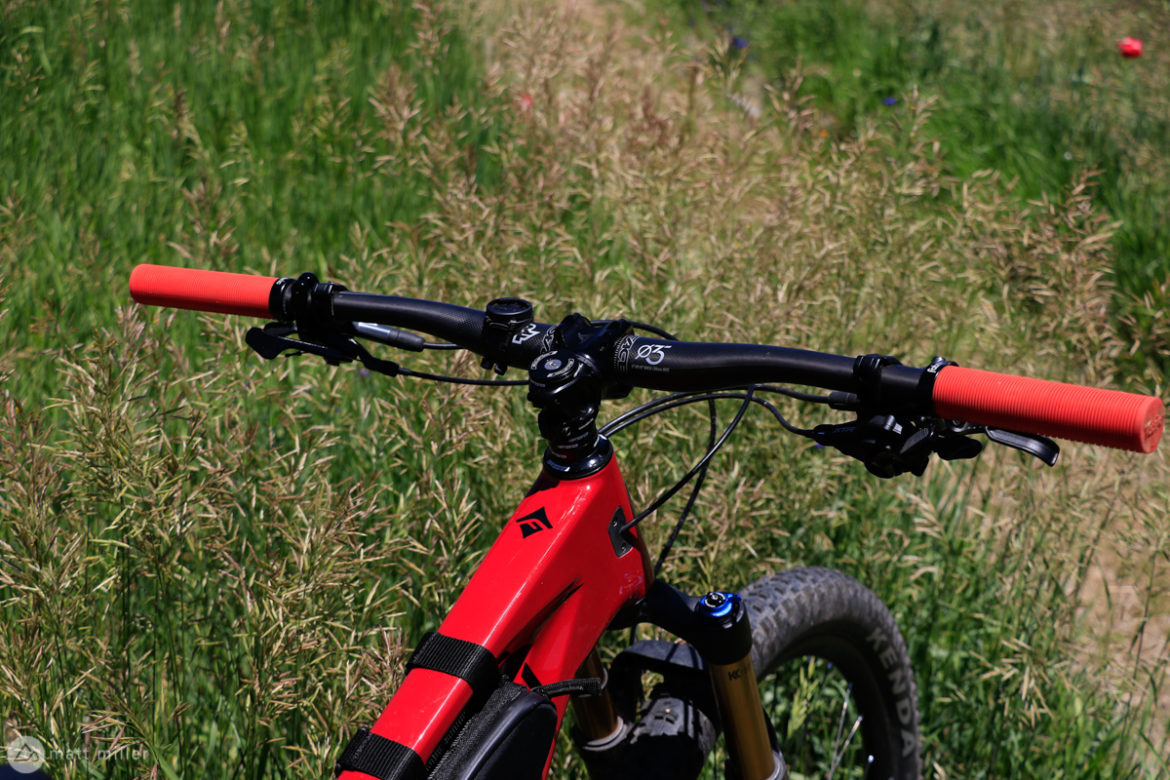 Stopping me are the new Shimano XTR 4-piston trail brakes and the drivetrain is also Shimano’s newest 12-speed XTR groupset.

In other contact point news, I put the new Ergon SM Pro saddle on, primarily because of the red accents, which looks so pro. Laughs aside, it’s a comfortable saddle and should keep my butt in the right position. 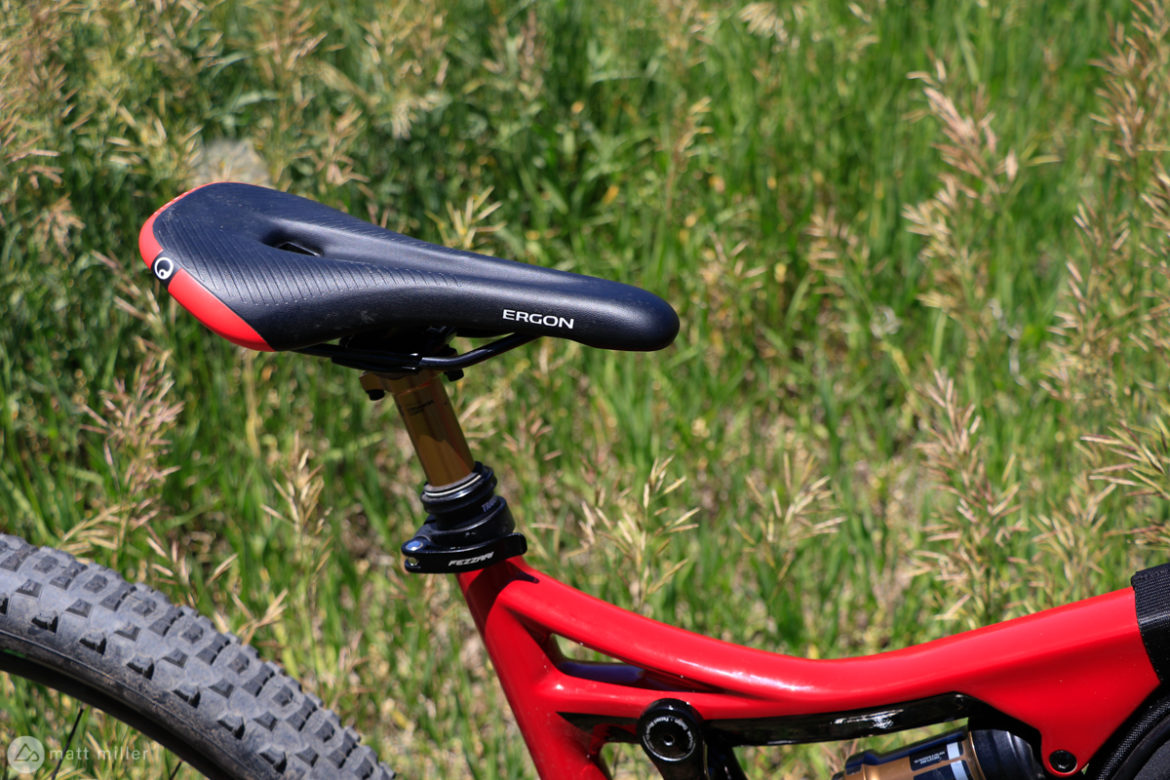 I received some of the new CushCore XC inserts that we covered at Sea Otter. They are more narrow than the traditional CushCore inserts, are still a little painful to install, but give me huge peace of mind and confidence that my tires will hold up, and absorb the rough stuff in BC. Look for a full review on those and their counterparts, the CushCore Pros. 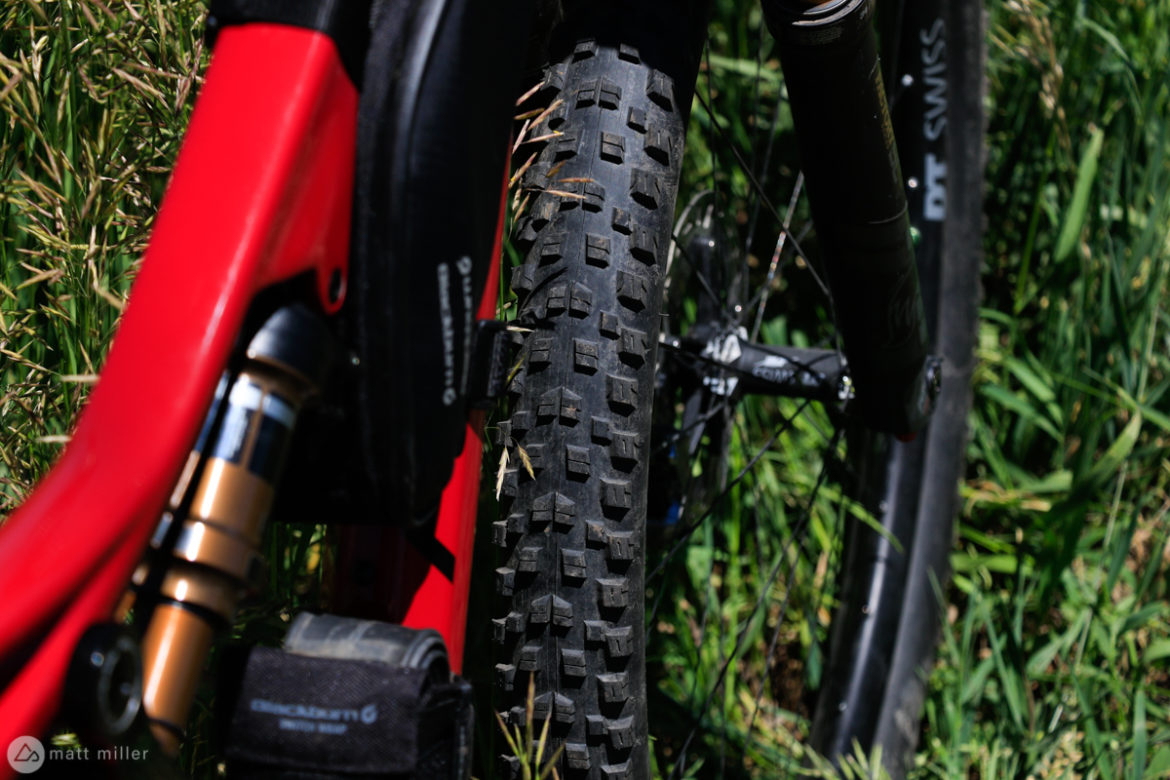 I also threw on two new tires. Up front, it’s Kenda’s new trail tire, the Regolith in a 2.4-inch width. This seems to be a fast rolling tire with some decent knob spacing which should hopefully make for a great hardcore XC tire up front. 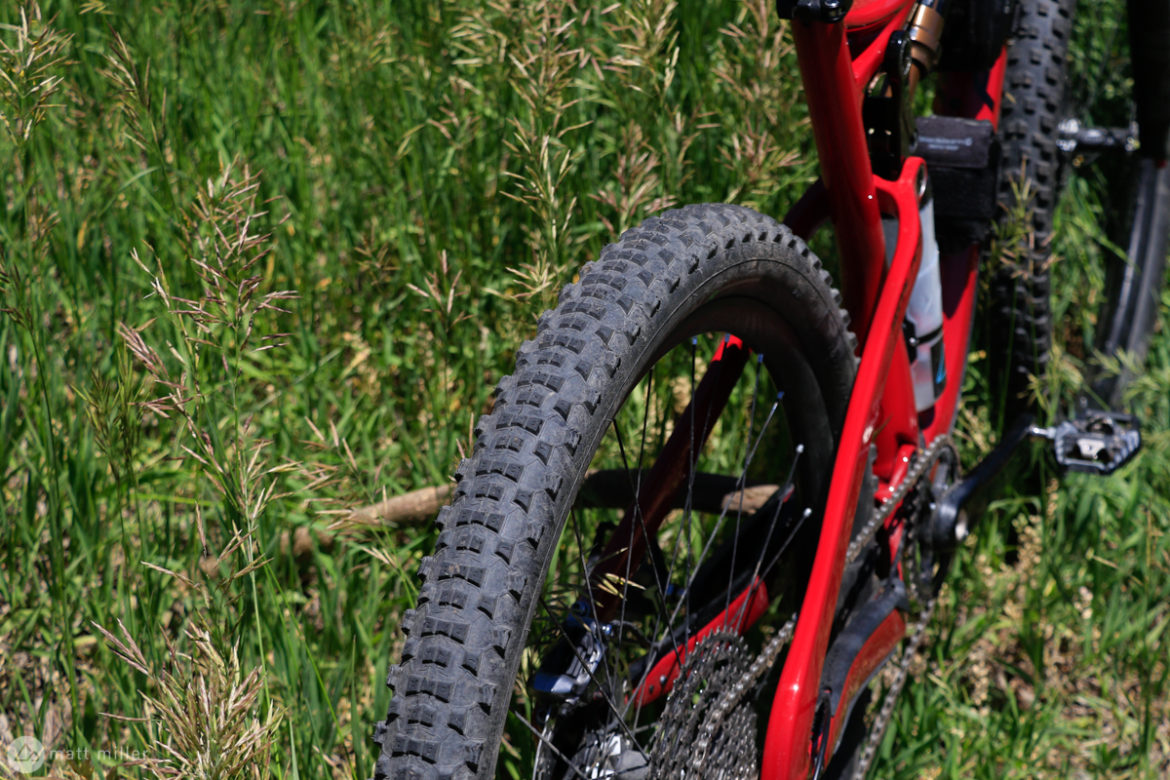 In the rear, I put on the new Pirelli Scorpion R, a rear-specific tire. It has tight knob spacing down the middle, with bigger transition and cornering knobs, and is also a 2.4-inch width. It should be a pleasure to pedal on long days with its fast rolling knobs, and I’ll take anything to help keep my momentum going.

One of my main concerns for the race is cargo setup. I don’t need a lot, since there are at least two aid stations, but I want enough on-bike storage so I can put everything I need on the bike, rather than using any sort of pack at all. Blackburn also sent their Outpost Corner bag and Switch Wrap bag after Sea Otter, and so far it looks like I can put all my tools and accessories in the bags to eliminate the need for wearing a pack. 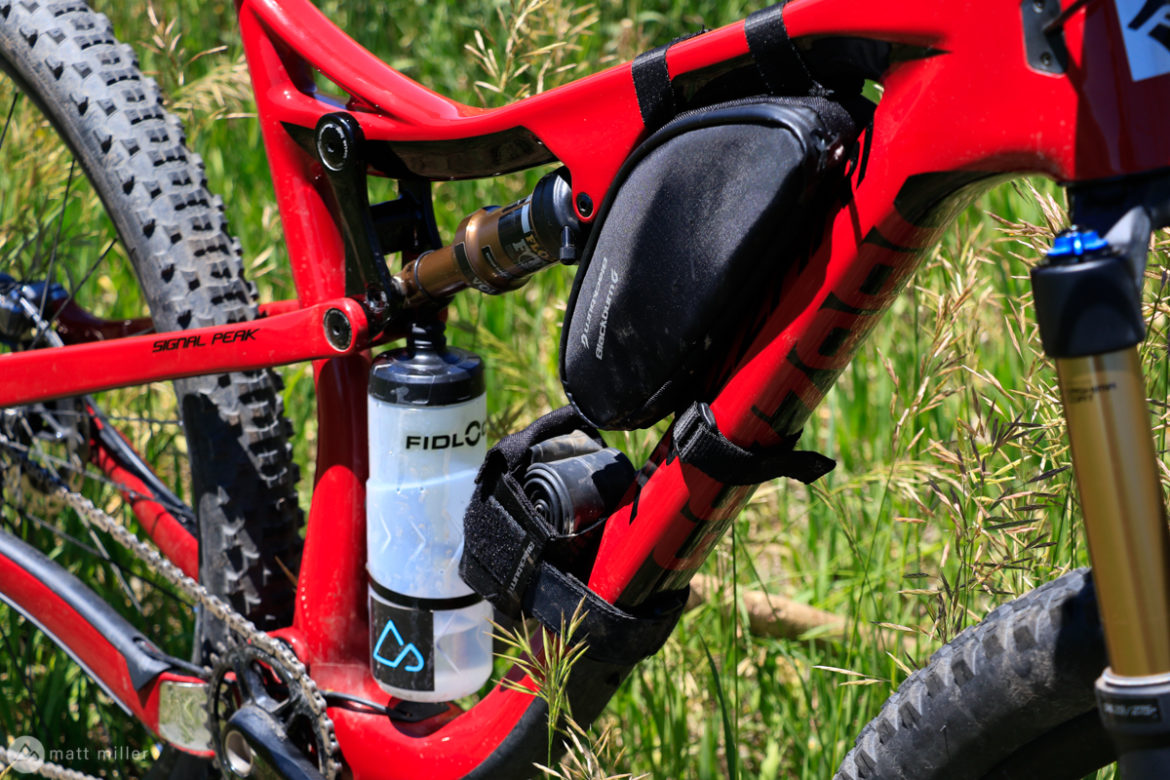 I’m also using a Fidlock bottle, because it looks a little cleaner than a cage inside the frame, and I think the twist out and push back nature of the clasp will make it easier to drink on the go.

I have downloaded all the stages for the race and transferred the GPX files to the new Wahoo Elemnt Roam, and will track rides and data on the Roam. 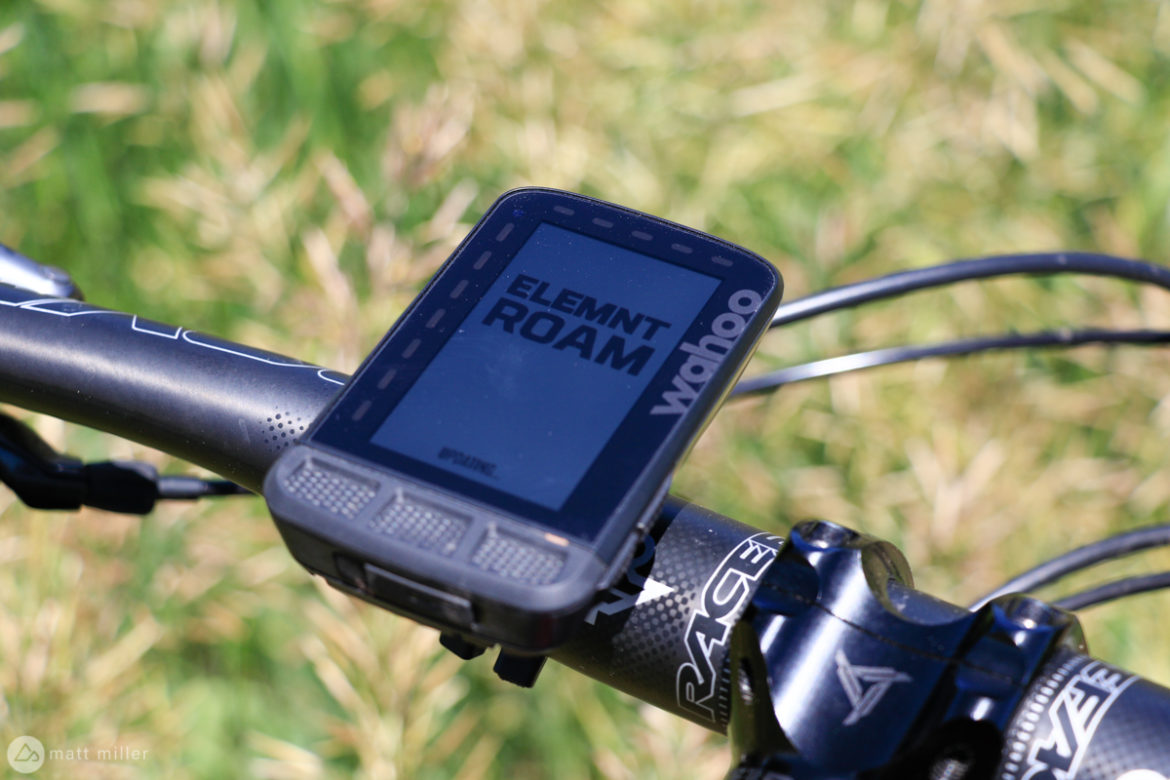 Stay tuned for a full review on the Signal Peak, along with separate reviews on the Blackburn bags, Ergon saddle, Fabric grips, Wahoo Elemnt Roam, Pirelli and Kenda tires, CushCore, and ride reports and interviews from BC Bike Race.

Culture
The New Ripley AF Trail Bike From Ibis Cycles Looks...
Videos
Watch: Myriam Nicole does it again: 2nd win in a...
Videos
Watch: Mountain Biking in the Middle of the Ocean
Gear
The $499 Schwinn Axum Costs Less Than a Decent Fork,...

I noticed that you seem to be liking the short-travel XC-Trail bikes lately. While I find the medium-to long-travel Trail/Enduro bikes, with progressive geo and wide tires, to be ideal for medium to advanced technical singletrack, I do wonder what a light short-travel respronsive XC bike with progressive geometry would be like. I’m thinking something along the lines of the Ibis Ripley but with only 100mm front/rear travel and light-weight 29×2.6 tires like the Maxxis Ikons or Rekons on inner width i28mm rims —very light-weight with a very efficient pedaling platform. The Signal Peak comes very close to what I want.

Plusbike Nerd, I am really enjoying the new-age short travel stuff lately. I’ve mostly ridden trail and enduro since I started mountain biking, but the new XC stuff is so fun to descend on these days and way nicer to climb with than enduro bikes 🙂 So far the Signal Peak can make its way down some tech with ease.

Just curious. How did you get a red Signal Peak? I like the color but I don’t see that on their webpage. I am loving my Signal Peak by the way.

Hey bikemoab, the red is a new colorway for this year, but correct, it doesn’t look like it is on their website yet. Glad to hear you’re enjoying!

Matt, I have this frame and have not built it up yet. Want to use it as an endurance xc race bike. The two water bottle slots inside the frame really sold me on it. Curious to hear your thoughts on how the Fezzari’s take on the Horst Link (tetra link) pedals and climbs compared to dwlink, vpp, yeti etc xc bikes. I have a RIPMO as my main bike and have been on mostly DW link bikes the last 10 years. Only exceptions are the Intense Spider Comp and Evil Following. Thanks for any insights!

Following! Very interested in this bike. On my short list for this exact type of riding. Looking forward to hearing your feedback!

Good luck, can’t wait to hear about the race!

Cool Matt. Look forward to the full review. Good luck in the race.

Looks good on red. Looking forward to the review. Enjoy the race.

My intense sniper has 100mm shocks and 120mm fork. It’s about 66.5 heat tube angle. Seat tube angle at 73. It’s what you want in the BC bikebrace. Light, fast and capable in most terrain.

There were a few people on Snipers. Seems like a great rig for it.