I first commented on this bike in my initial article about the Mach 6, and I have put quite a few miles on it since then.

There is a lot to be said about the Mach 6 frame that can be summed up in a few poignant words. It is stiff, strong, and quiet. No matter how fast I ride down ungainly terrain, or how big of a jump I have taken it off of, the bike feels solid.

I was initially skeptical about the Fox Float X, because let’s face it: there are more adjustable shocks out there with larger air canisters. I have to admit that I’ve been pleasantly surprised by this shock. It responds well at speed, and seems to cycle really well even during long downhill runs. It has maintained a very plush feeling and never felt like I hit the bottom, even though I drop the sag ring off the back almost every ride. I have pushed the Float X as hard as I personally can, and it never disappointed. I will admit that it took 2-3 weeks of hard riding to dial it in well, but that is par for the course with almost any high end shock. I actually did have to put about 50 (yes, fifty) more psi in it than I expected, but it rides like a dream even in bike parks. 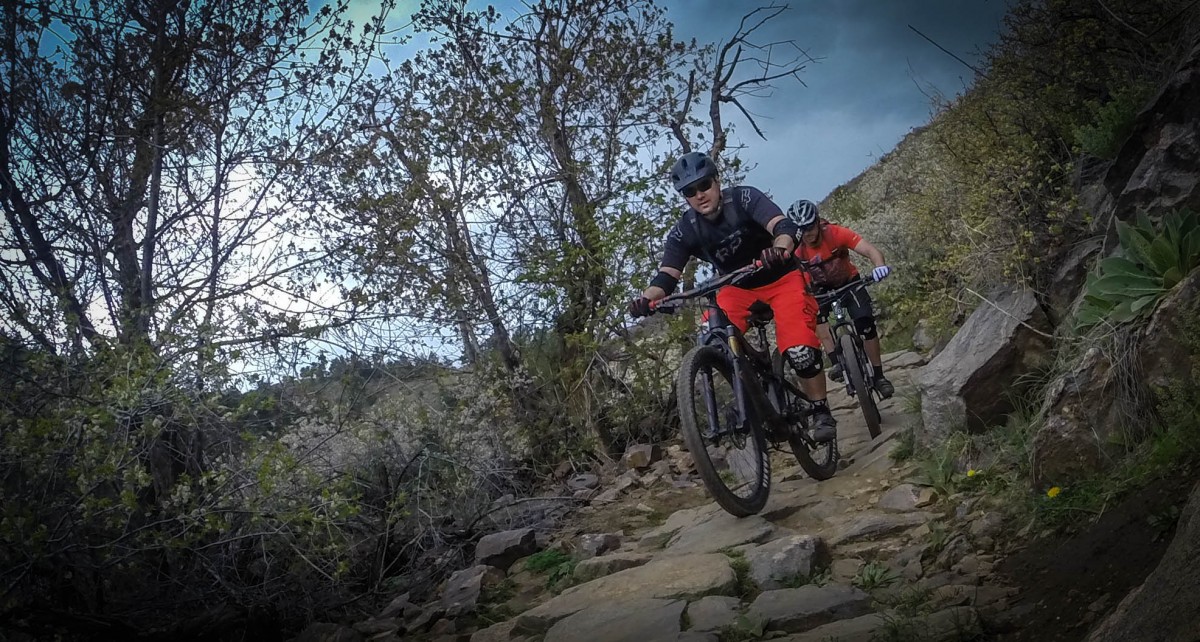 Another minor concern with the suspension is that the rebound adjustment knob is tucked very tightly in the forward section of the shock, and requires a 2mm allen key to adjust. This is only an issue when you are trying to dial it in. After that you never really touch it, and it stays hidden from anything that might inadvertently change the settings. It’s obvious that Pivot worked closely with Fox to get the best possible balance for a progressive suspension for the DW-link rear end. I found no reason to swap this shock out for anything else, and I plan to keep it for a while.

I’ll be completely honest: I literally spent hours trying to decide between the new Fox 36 and the RockShox Pike when I built this bike. The Pike has been reviewed time and time again as a trustworthy fork with an exceptional damper, and it added more stealth to my bike, which is a bonus. I am also fond of the ability to pseudo-lock out a fork on climbs, a feature the Fox 36 lacks. Fox has had to work hard to restore its reputation after the Pike emasculated competitors a couple of years ago. I personally did not want to mess with the Fox 36, mainly because it didn’t have a quick release thru-axle. After much deliberation, I bounced my concerns off of several riders and mechanics that I trust who have used both of these forks extensively. To make a long story short, they talked me into trying the Fox 36, and I couldn’t be happier.

The Fox 36 is by far the stiffest, most adjustable fork I’ve ever used. Also, it turns out that it isn’t such a big deal to remove the front wheel and reinstall it, either. Kudos to Pivot for putting this fork on this bike, which translates to maximum confidence when you are slaying the trail or going big. I’ll never speaketh ill of the Pike, but the 36 is a very, very nice fork, which Syd also reviewed and had great things to say about it here.

I have tested these brakes extensively in another review article, but I’ll summarize the salient points here. First and foremost, SRAM has also had to overcome a certain reputation that led to Shimano XTs dominating the market for the past 2-3 seasons, but I’m now a firm convert to the new Guide technology. Though XTs are still fantastic brakes, these modulate a little better and have more fine tuning, including an on-the-fly contact pad adjustment knob. The new rotors are quiet and dissipate heat well. The reservoir is powerful, even with an imperfect bleed. I put the Guide RSC brakes on both of my bikes, and highly recommend them. 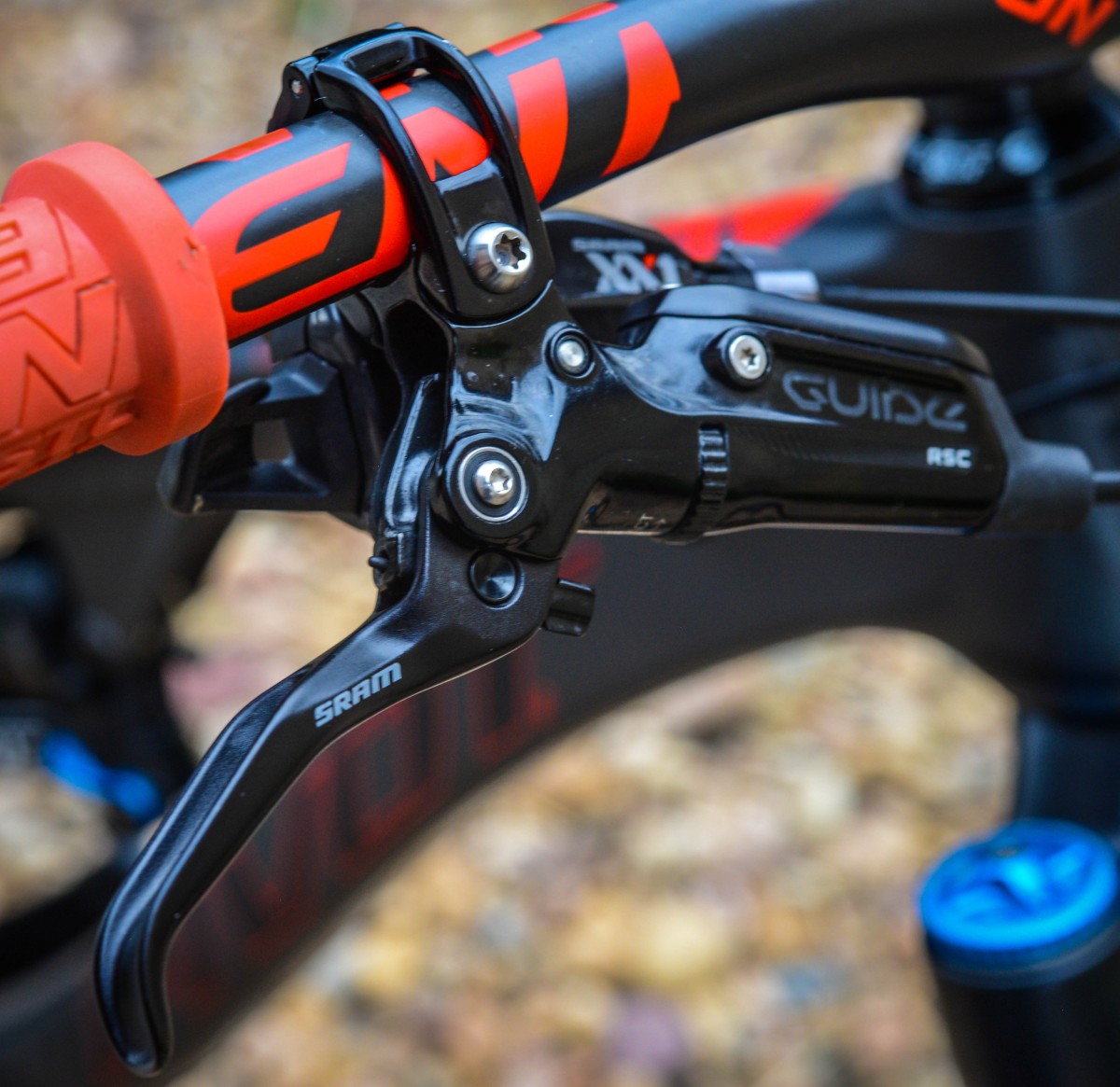 I’ve been using KS exclusively for the past three seasons and I personally like them better than competitors because of the feel and how the lever operates. I did have some issues with the first generation KS dropper (sticking, trapping dirt, etc….), but these issues seem to have been remedied with the current crop of offerings. The all-black post is sweet and looks great on almost every bike.

These tires are on all of the builds across the Mach 6 line, and for good reason.  The front hooks up well in corners, and the rear has ample traction climbing and railing at speed. They also have a durable casing that resists scrapes and punctures, they’re affordable, and are relatively lightweight. Like many softer compound tires, the rear will wear quickly in hard, rocky conditions. They are ideal for almost any dry terrain, but become somewhat slippery when worn and wet. After about 250 miles I decided the rear tire needed replacing. I could have pushed it through the summer, but why? It’s prime season, and good tires are a must. 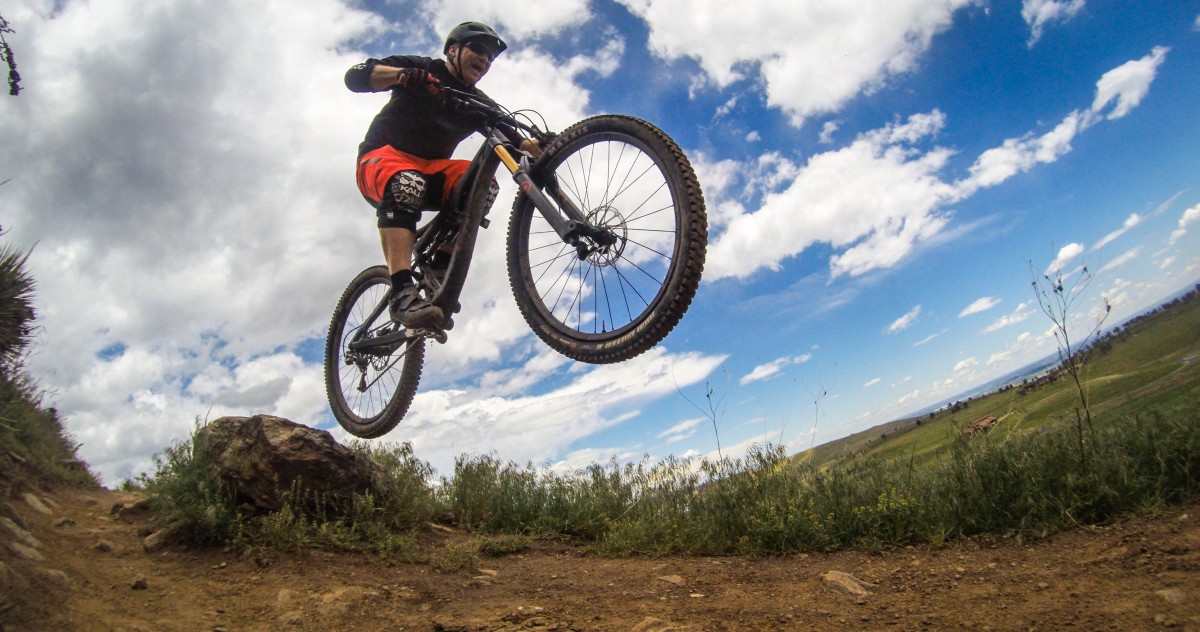 I’ve actually been running XX1 on all of my bikes now for the past two years after realizing how well they worked for me. To be totally transparent, I had a series of problems with my first XX1 setup in 2013 that that made me question my decision. Since early 2014, however, I have had virtually no issues with the SRAM 1x setup on several personal and test bikes. The Mach 6 XX1 is no exception, and the shifting has been flawless.

Pivot stocks the direct-mount 30T RaceFace chainring, which is a spiderless ring that is easily changable by removing the cranks. I’ve found the 30 to 11-42 gearing adequate for the steep Colorado Front Range, but of course the rings can be swapped for anything from a 26T to 36T depending on where/how you ride. They are also relatively inexpensive to replace. The RaceFace Next SL cranks are a dream: light, quiet, and strong. Carbon cranks are never a necessity, but they are one of the many cumulative signature touches that make this Mach 6 build superb.

The only thing I would caution any rider about a 1x drivetrain: keep it clean. Really clean. If you ride where there is a lot of sand and dirt, you may experience an annoying grinding feedback with every pedal stroke. I’ve found that using a dry lube like Pedro’s Ice Wax 2.0, and cleaning the drivetrain after every ride, keeps the XX1 running perfectly.

I demoed this bike a few times (with the XT kit), along with several others, before I pulled the trigger and purchased it. Aside from being a very quiet, confident descender with some really plush travel, what really makes it stand out is how well it climbs, and how maneuverable it feels on slow, clunky terrain. I was initially worried that the comparatively slacker seat angle would pull the front end of the bike up on steep climbs, or tire out my quads on climbs. Instead, what I’ve found is that the 160mm fork stays firmly planted on even the steepest climbs, and the rear wheel seems to have a lot more traction than most other bikes I’ve tested. When I first rented a Mach 6 last year, I destroyed all of my PRs both uphill and downhill on my local trails, which really shocked me. I also found that many of the more difficult, loose, steep uphill sections seemed easier on the Mach 6. 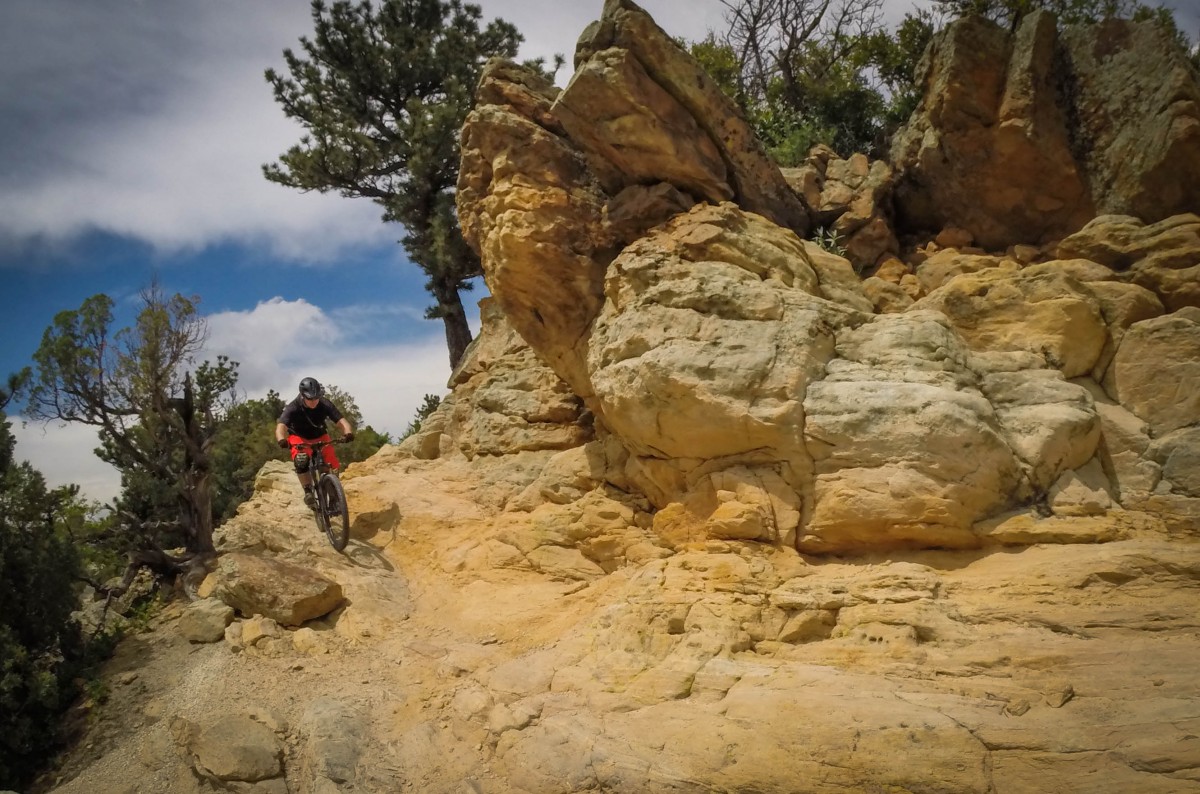 As soon as I purchased the Mach 6, I headed straight for Moab, and rode trails I’ve spent a lot of time on (Porupine Rim and Amasa/Ahab). I could not believe how much more fun they were! I bascially just pointed the bike downhill, and it went: flying over drops that used to scare me to death.

Similarly, there were a few drops and rollers on Holy Cross and Pucker Up in Grand Junction, and at Dakota Ridge near Denver, that I was too chicken to do until I owned this bike. I’m not saying that owning a Mach 6 will make you a better rider, but I am saying that this bike removes a lot of uncertainty from the equation: it will go where you want it to, up or down, if you point it in the right direction and trust it. After running it through Trestle Bike Park a few times, it’s easy to see why it is still a competitive weapon in pro enduro races. 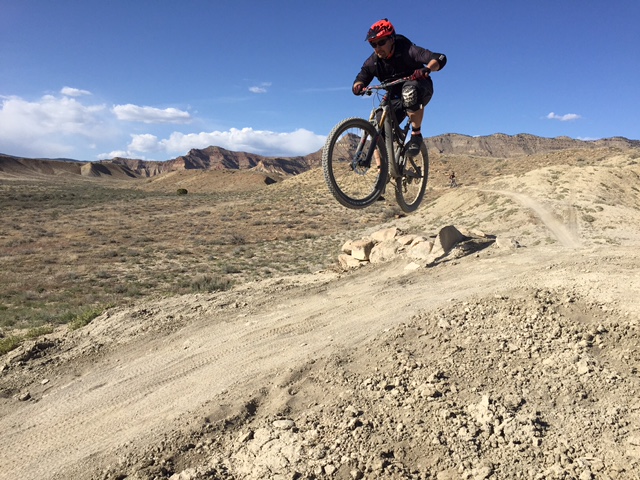 The only thing that surprised me about this stout bike is that it does feel a little flexy in the rear if you push it really hard around berms or corners. That may only be the case with heavier riders like me, and Pivot recently (un)officially announced a beefier aftermarket “Lawwill Link” that should stiffen up the back end a bit with only a very slight weight penalty. Most of the time, however, I don’t notice this at all.

Make no mistake: this bike is solid, and I purchased it for a lot of reasons. Obviously it is not for everyone, and there is a lot of competition out there in the enduro bike market. However, if you live to “shred the gnar” and want a bike that is just as capable of grappling up technical ascents as it is flying down them, look no further: the Mach 6 is still the benchmark of enduro bikes.

Your turn: How about you–do you own a Pivot Mach 6? If so, what are your impressions? 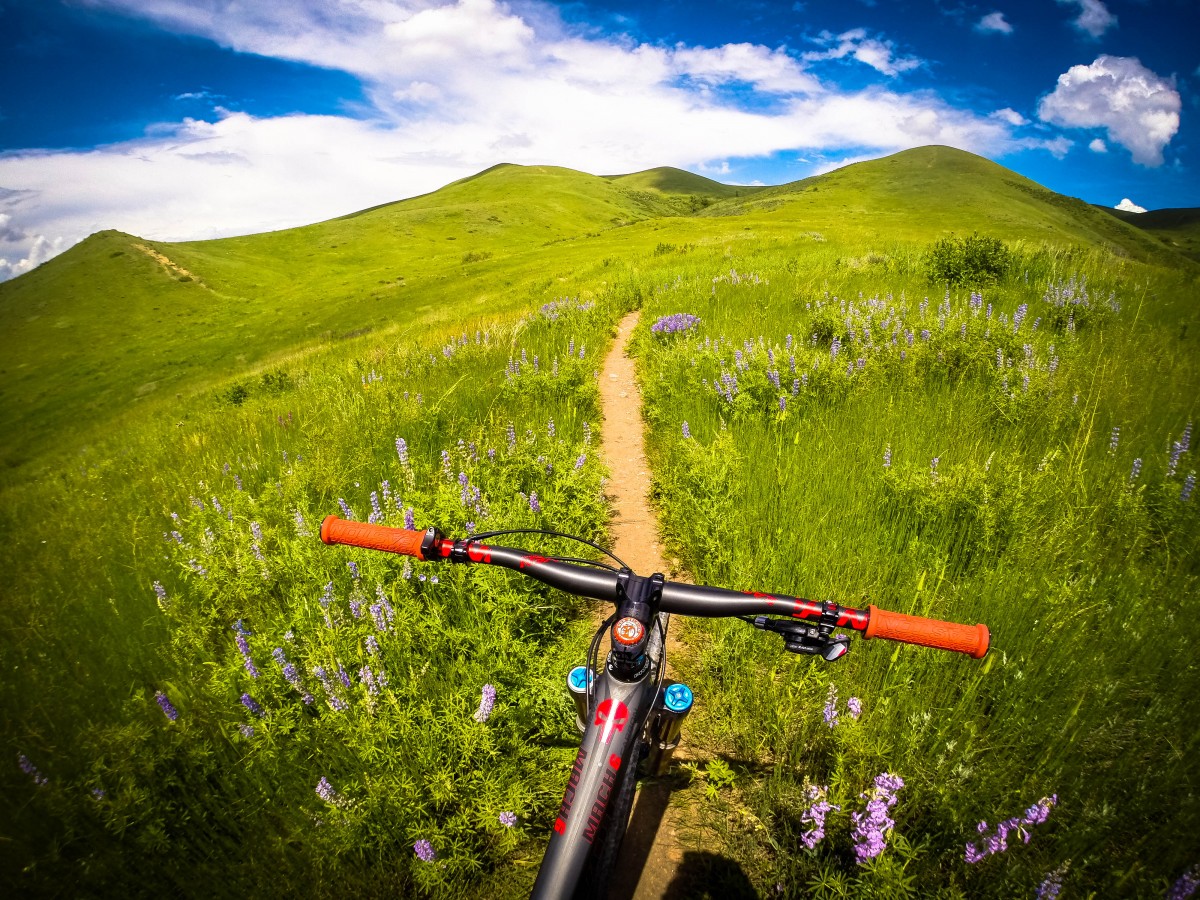 Gear
Never Underestimate the Power of a Good Zip-tie
Gear
The Maxxis Minion DHF Tire is Still the One to...
Gear
These MTB Deals are Fire, including 40% off Patagonia Dirt...
Progression
Sizing Up or Down Plus Handlebar Widths and Crankarm Lengths:...
Subscribe
Login
Please login to comment
3 Comments
Most Voted
Newest Oldest
Inline Feedbacks
View all comments

Such a fun bike!

Yeah, I could definitely see myself riding this bike!

Awesome finish to the review!

I went with an M6 “competitor” last year, but every time I walk into the shop I just sit on the Pivot for a few minutes wondering if I made a mistake. Sweet bike, nice article.