Michael demo’ed the Felt Edict Nine 1 before I did and he wouldn’t quit bugging me about it until I rode it too. Oh man, what an awesome bike! For both of us the Felt was the hands down favorite of everything we rode. 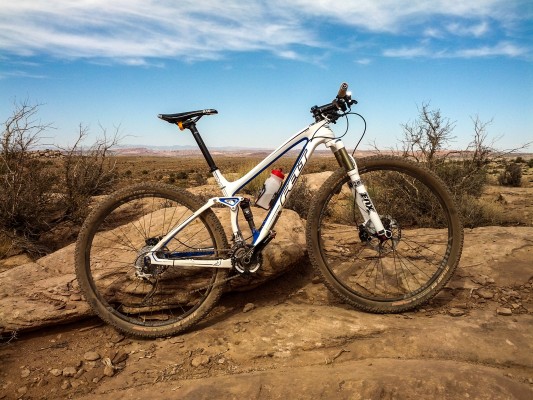 The Edict Nine is Felt’s signature 29er full suspension racing bike. As such, it is incredibly fast on pretty much any XC trail.

Felt has employed some dark magic here that results in this bike not feeling like a 29er at all. It handles like a 26er in tight stuff, but still rolls over drops and ledges like a true 29er. The 2×10 XT powertrain accelerates smartly and the 4″ Fox front and rear suspension are as smooth as silk. XT disc brakes with Ice Tech rotors round out the going and stopping bits.

Our test units did not have the wheels and tires listed on the Felt spec sheet. I don’t recall the wheels but the tires were WTB Bronsons and they were excellent in both rolling resistance and cornering traction.

I had not looked up the specs on the bike before riding it, so I was surprised when I noticed the fairly steep 71.5° head angle. This bike definitely descends like it has a slacker angle. When I mentioned it to the Felt rep he said that with Fox releasing a fork with a 46mm offset, it allowed them to “do some interesting things with the fork trail.” I’ll say! This was the smoothest and best handling bike I rode the whole weekend, and it devoured all the technical stuff with ease, up and down.

I was able to ride about 30-40% faster (not exaggerating!) than on other bikes I demo’ed over the same section of trail. I intentionally pushed it well beyond my comfort zone, and the Edict Nine held its own through everything I threw at it.

Fortunately, Felt also offers a model with the same carbon frame and SRAM/Rockshox/Avid component group for $3,600. Even further down they scale, they also have two aluminum frame models that start at about $2,000. But given the different frame materials these bikes may or may not ride as well as their carbon brethren.

You got kicked out of the Giant Fanboi club for that last comment. haha

Evicted by an Edict!

Michael took that pic with his Android phone as it was after we had gotten tired of lugging around the SLR.

Someone needs to make a better SLR carrying case for MTB.

That is one sharp-looking bike.

The seat tube looks interesting. Most I’ve seen are curved the other way.

I got a pretty good laugh that the bike cost more than the Volvo!

Looks like wheels are WTB in the pic to match the WTB tires. Any changes you make to the bike?

The bike pictured is how it ships. My demo had those wheels but WTB Bronson tires, which were awesome.