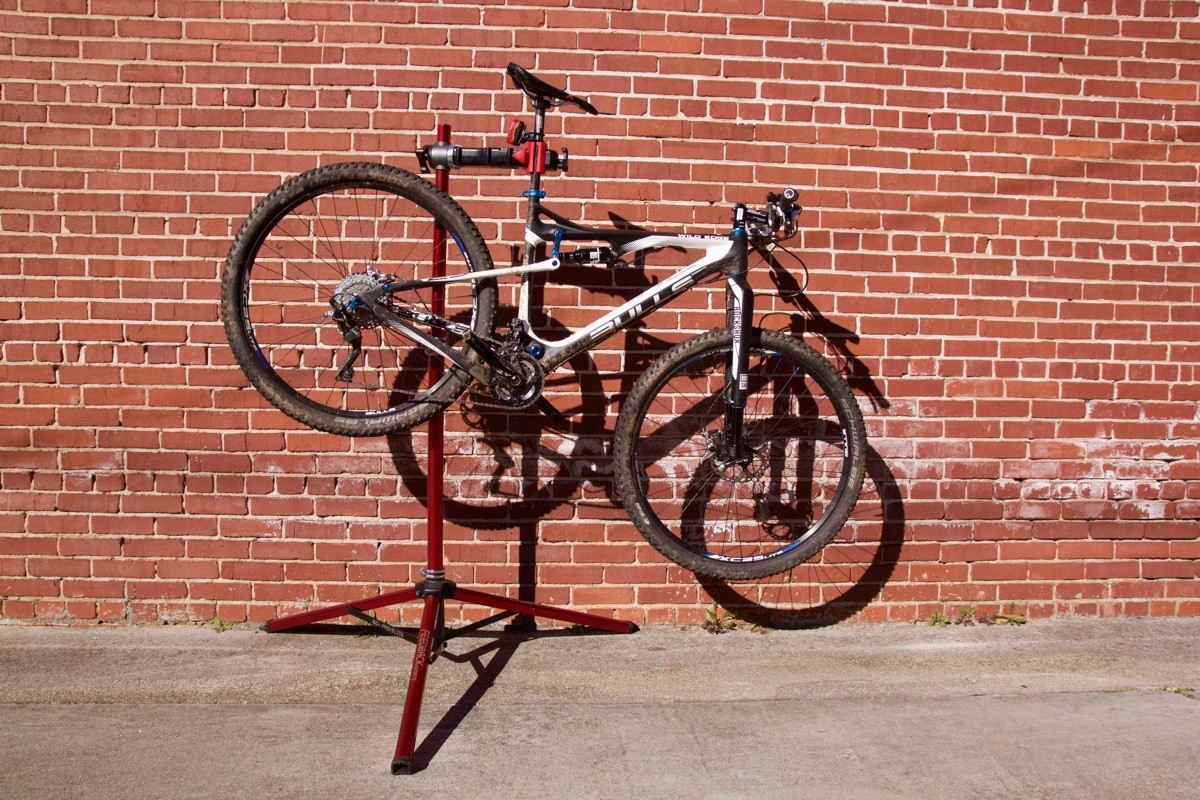 A quality bike work stand will easily outlast several bikes. A great work stand, on the other hand, will outlast its owner. I’m convinced the Feedback Spots Pro-Elite work stand is part of the latter group, though unfortunately I won’t be around to find out for sure. 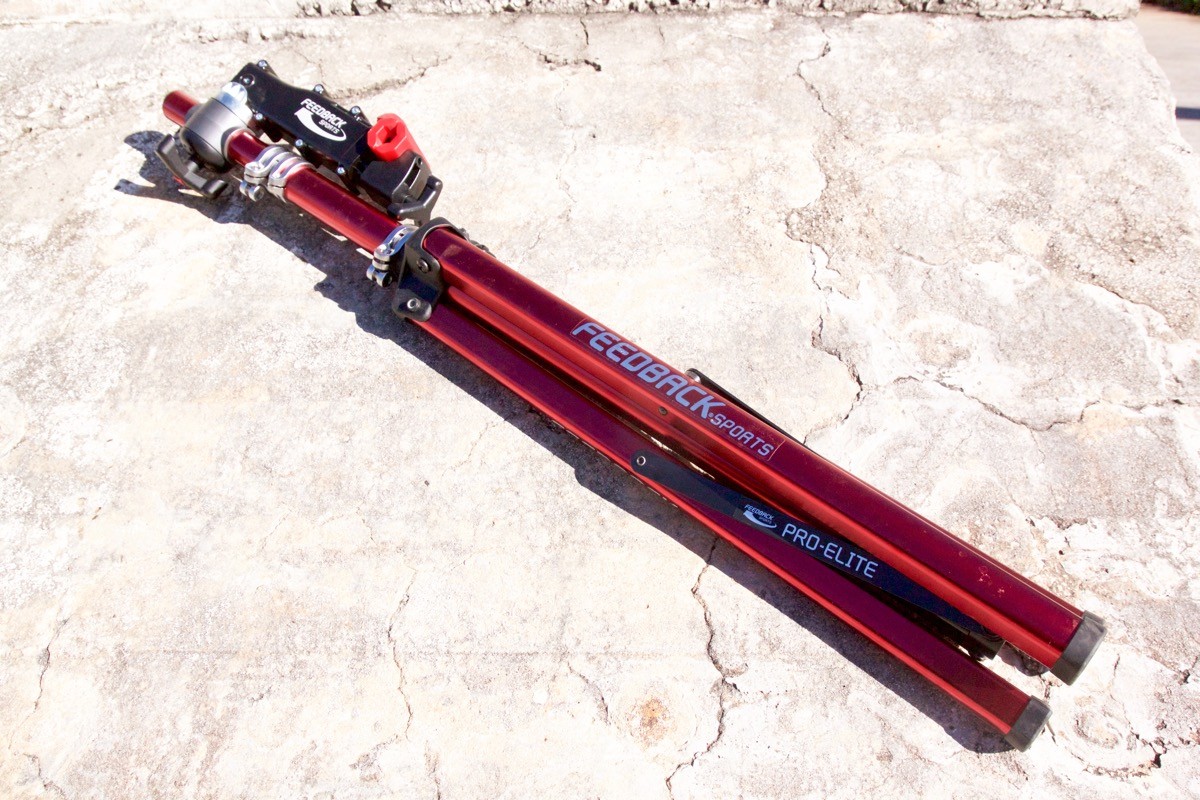 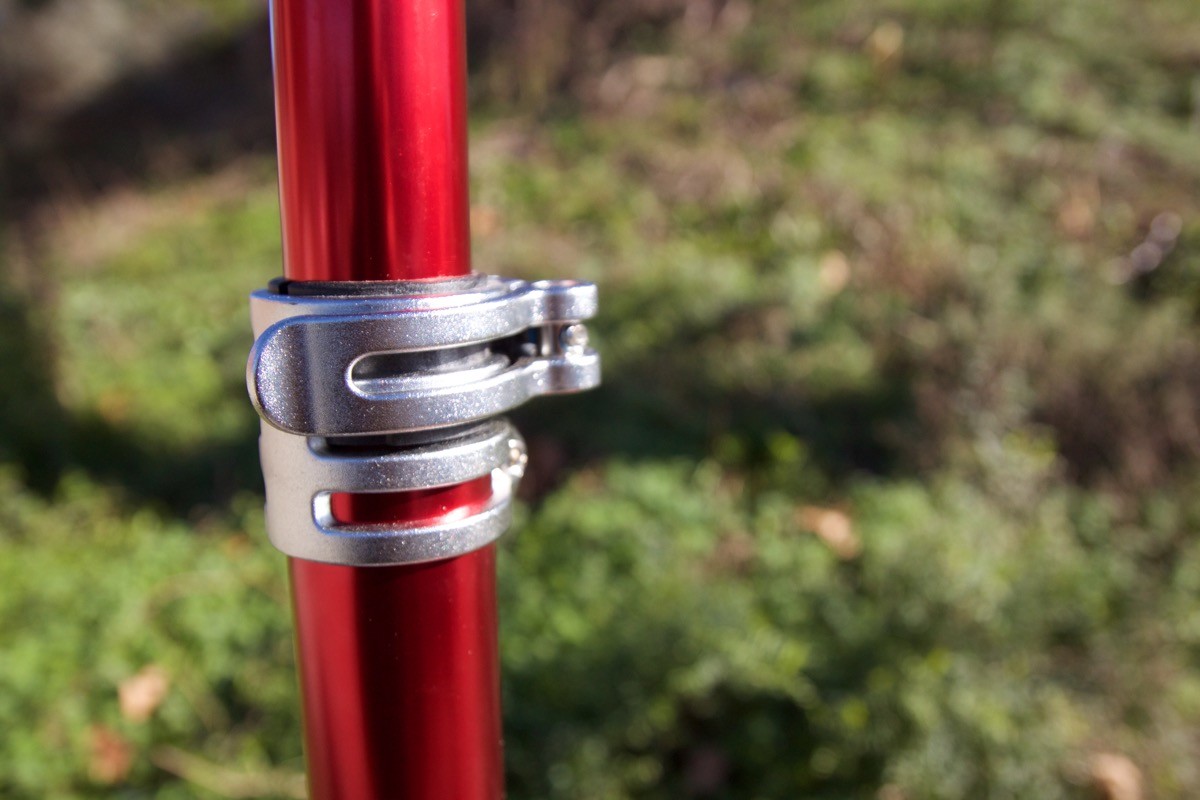 The Pro-Elite bike work stand sits at the top of Feedback Sports’s line of stands, and it’s a beauty with bright red anodized legs and tubing. This stand is designed to be used at home or on the road so it’s lightweight (12.6 lbs) and folds down quickly and easily. Quick release levers on the vertical tubes are substantial and feature some of the smoothest action this side of a Marine’s M9 Beretta. Seriously, none of the quick release levers I’ve ever used are this smooth, and the telescoping tubing glides like it’s riding on a pillow of air. 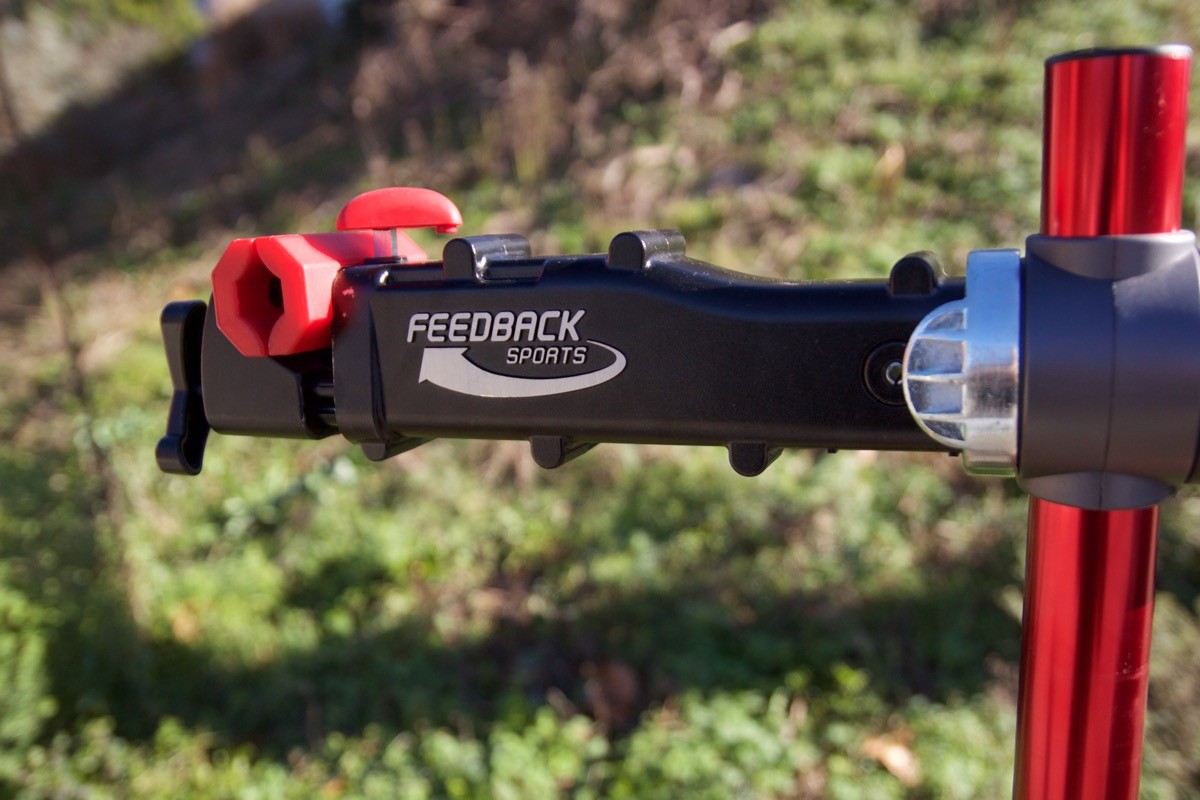 The clamping mechanism on a bike work stand is really “make or break,” and in the case of the Pro-Elite, the clamp truly does make this stand a standout. The clamp is substantial (it weighs nearly 6 lbs by itself!) and can rotate 360°, making it possible to work on a bike in pretty much any position you like. The jaws are covered with a non-marring material and can bite down on tubes up to 2.6″ in diameter. 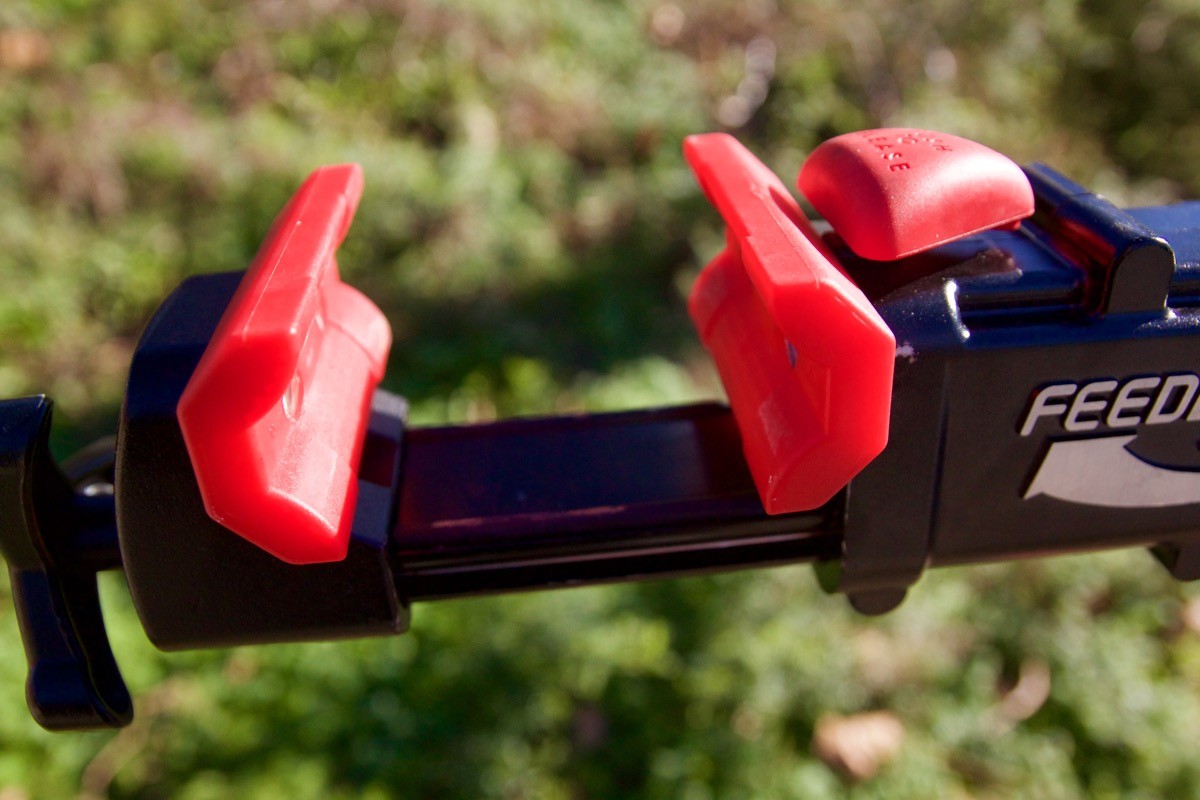 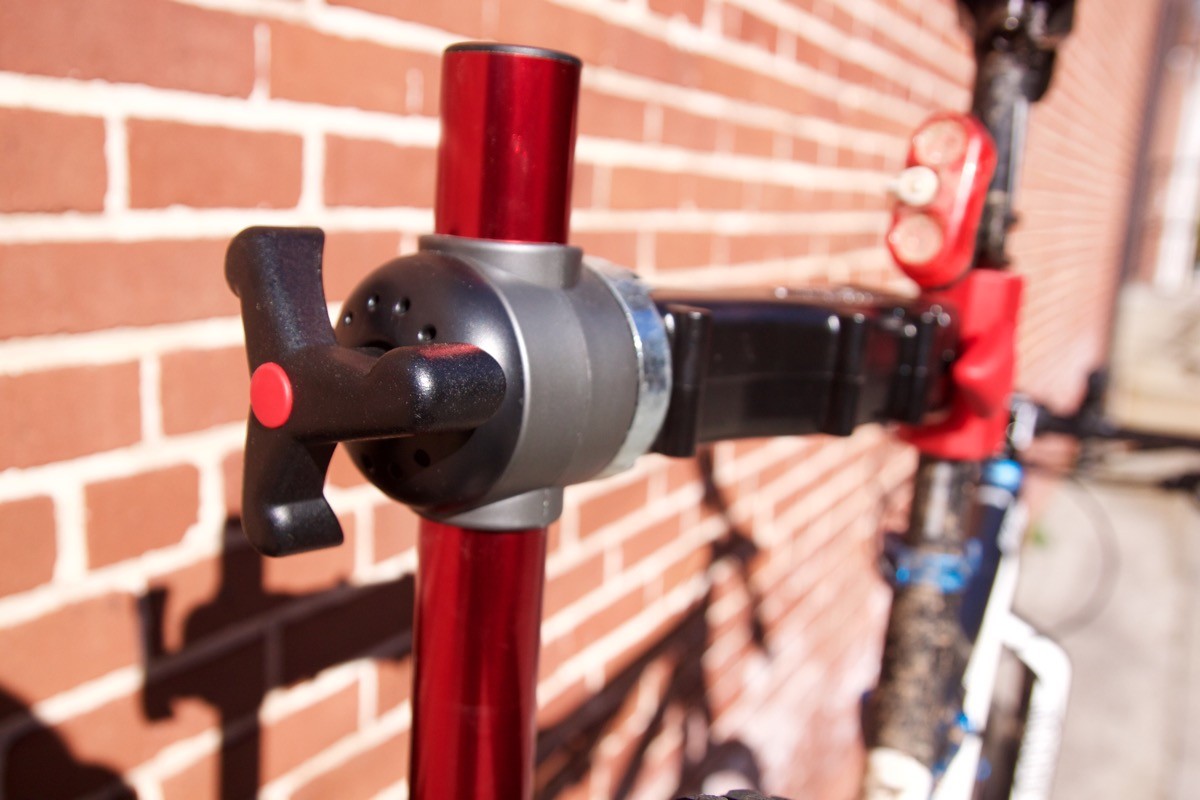 Feedback Sports has designed the clamping mechanism to work easily with one free hand. Just hold the bike in place and push the ratcheting mechanism shut. Once you’ve pushed the clamp as far as you can, screw it down to get it tight, and you’re done. To release, just hit the “eject” button, and the clamp opens. It’s taken me a little practice to get the one-handed operation down but now that I know how to do it, it’s quick and easy. To give you an idea of how nice this clamp is, if you were to purchase the clamp by itself, it would cost  $135– almost half the cost of the entire stand! 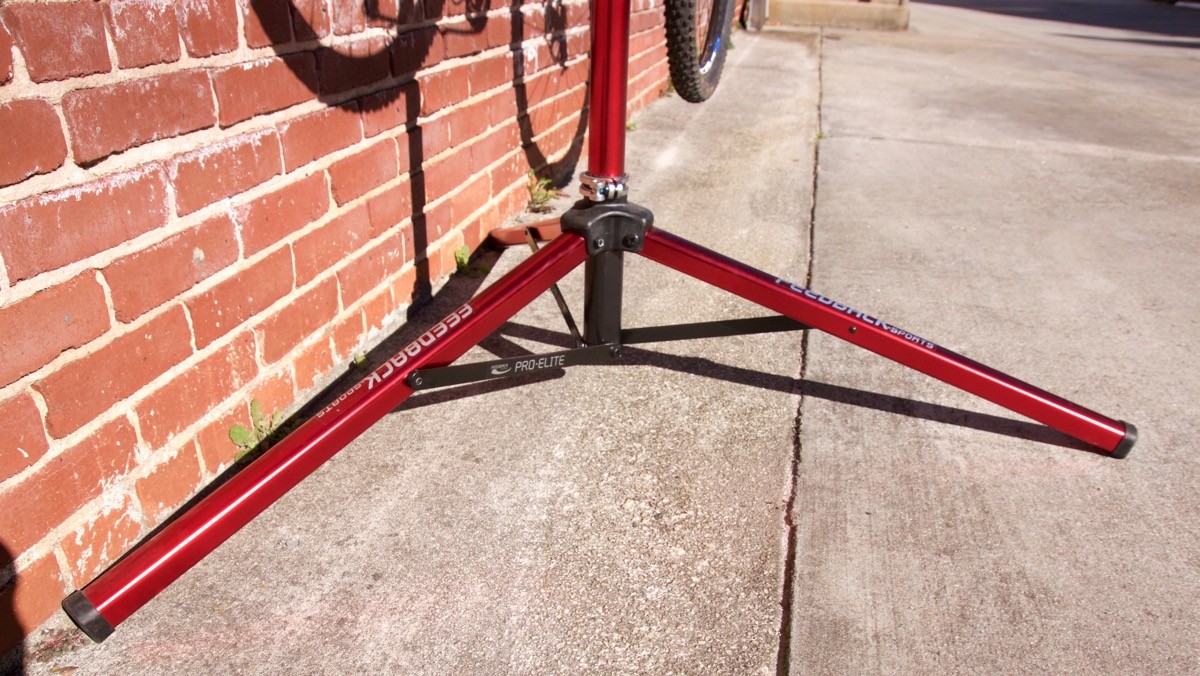 As a work stand, the Pro-Elite is incredibly stable thanks to its tripod design. The long leg extension keeps the bike balanced even if it’s in an awkward position and yet, I haven’t found myself tripping over the legs because they’re in the way. Feedback Sports says this stand can hold up to 85 lbs. Just be sure to call a buddy if you need to lift an 85-pound bike!

Because the stand is made from mostly aluminum parts, washing a bike on the stand won’t cause the legs or tubing to rust. Even the clamp is designed to resist corrosion and rust, which is good since bike mechanics have a tendency to ooze Stan’s, grease, and brake fluid whenever they work.

Feedback Sports puts a 3-year warranty on this repair stand, though I would be shocked to have to make a claim. In fact, we’ve had this stand in the Singletracks office for nearly a year, and it’s as good as new.

Mountain biking ends up being a lifelong sport for most riders, so why not buy a repair stand that will last a lifetime too? Bike tech may come and go, but a repair stand like the heirloom Feedback Sports Pro-Elite should stand the test of time.

Thanks to Feedback Sports for providing the Pro-Elite work stand for review.

I picked up a demo stand a couple years ago after a FTF. It is good as advertised; though there is rusting on the non aluminum leg brackets.

I have the non pro-elite model and it’s a piece of crap. Wobbles like a wet noodle in addition to being very unstable. I can’t even wipe my chain without the entire thing moving! The clamp is a major pain as well.