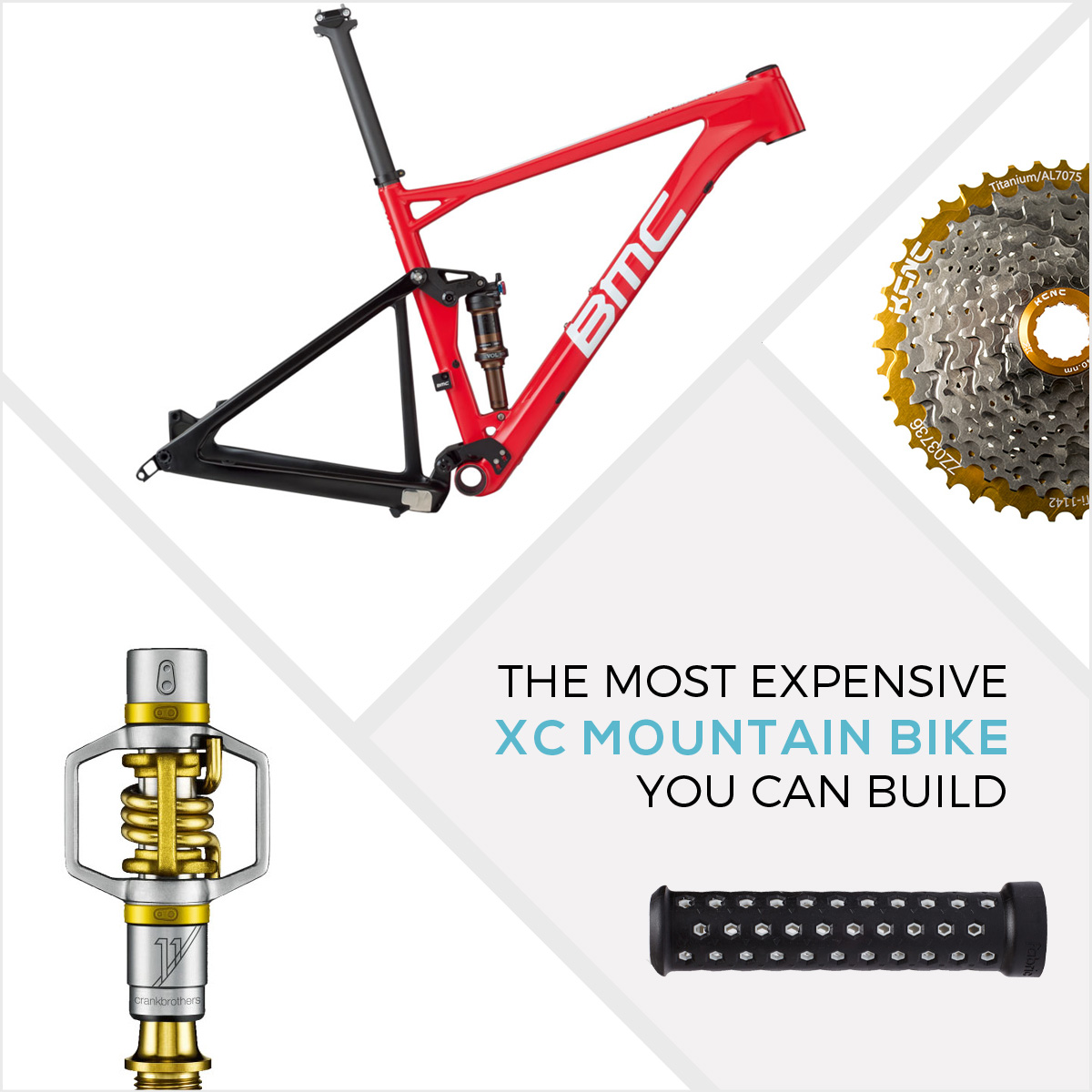 How much is a bike worth?

Before I dive into my choices below, I want to address a fallacy that many mountain bikers lean into when valuing a bike. The argument goes something like this: a bike is purchased for $4,200 and within a year or so, the owner upgrades to a nice set of $1,800 carbon wheels. Now the bike is worth $6,000, right? The thing is, pretty much everyone can see the problem with this argument, except for the owner.

The “old” wheels clearly have value; perhaps someone on Craigslist will pay $400 for them, yielding a more reasonable value is $5,600. But wait! Often times the bike company sells a nicer build of the same bike for $5,200 that includes comparable carbon wheels from the start. The difference is the bike company didn’t have to pay the full retail markup on the carbon wheels.

With this in mind, I’ve chosen to start with an XC mountain bike frame that doesn’t ship with any components. Sure, anyone can start with an $8,000 bike and add ENVE wheels and an XTR Di2 drivetrain to get to a $14,000 valuation. But where is the fun (or the accuracy) in that?

One final note: the components chosen for this expensive XC bike build were selected based on price and not necessarily weight or performance. The only criteria is these parts must be appropriate for this type of bike. For example, studded tires are expensive, but don’t make sense for an XC bike.

I started my research assuming I would quickly find some boutique frame builder selling a ridiculously expensive XC mountain bike frame. Instead, what I found is that while there are clearly some very expensive custom frames available, pricing is not standardized and is only bound by the buyer’s imagination. So yes, while there is probably a bike frame builder out there who can build a gold-plated bike, or build a bike with ridiculous angles and welds, I want to focus on bikes that are slightly more accessible. This means the frame needs to have a price tag on it.

Two of the bikes on Greg’s list of the most expensive mountain bikes, the BMC Fourstroke and Bianchi Methanol, are–or were at one time–offered for purchase in a frame-and-shock-only configuration. However, Bianchi is not selling the Methanol in the USA this year. 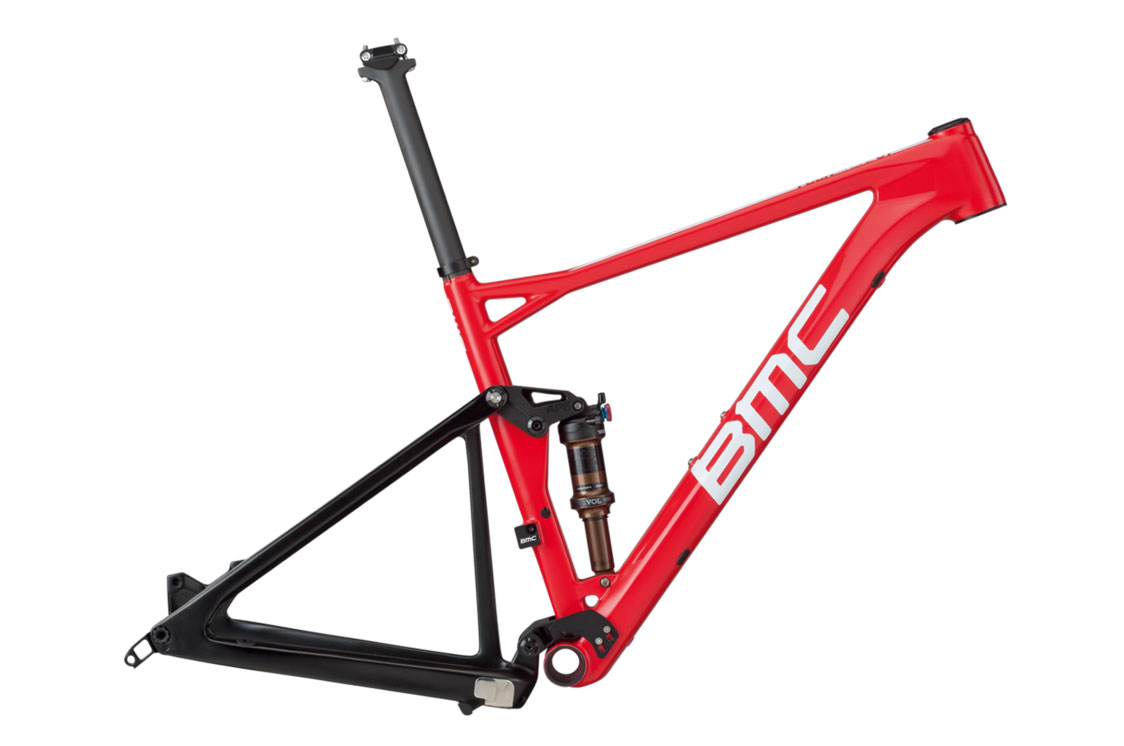 That leaves the full-suspension, carbon-fiber BMC Fourstroke 01, which retails for $3,999 USD. That price includes the Kashima-coated Fox Factory shock and a carbon seat post. For many mountain bikers, $4,000 is a lot of money to spend on a bike… and we’re just getting started.

The Most Expensive Drivetrain 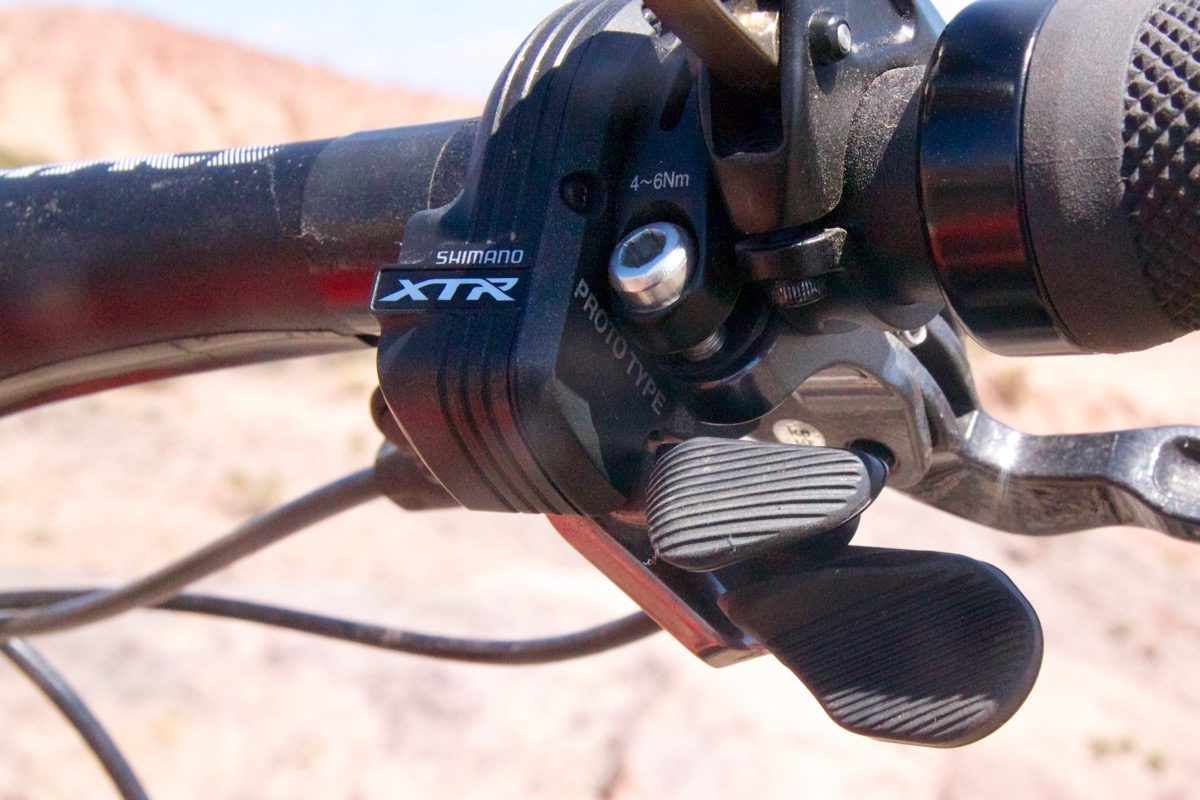 Customizing the base XTR Di2 drivetrain with a little extra bling is easy. Actually, I skipped an important part of the drivetrain–the cassette–because Shimano’s XTR 11-speed cassette is just too affordable. Instead, I found a Shimano-compatible titanium cassette for $490. The Shimano XTR crankset doesn’t come with a bottom bracket, so an appropriate Shimano-compatible, coated bottom bracket from Ceramic Speed ($499) should do the trick.  The only thing that is missing (other than an optional $150 chain guide) is the chain itself. Again, titanium is the way to go–this 11-speed titanium chain retails for $227. If a titanium chain seems too gimmicky, Muc Off has a nanotube coated chain for just $145 that could be a good option.

One interesting item I found while researching expensive mountain bike drivetrain bits is a pair of after-market Shimano pulley wheels from Ceramic Speed that should work with our Di2 derailleur. These 3D-printed, titanium, nano-coated pulley wheels sell for an eye-popping $1,000 for the pair! I won’t include those in the cost of the build since we already have a complete derailleur, but just know that they do exist.

For cross country bikes, it’s not difficult to find lightweight–and expensive–suspension fork options. The RockShox RS-1 adds a third dimension–high performance–to the equation, and the $1,865 price reflects that.

High-end mountain bike brakes from even the largest brands tend to top out at fairly-reasonable price levels. So, I decided to look for something a bit more exotic, and ultimately landed on the Trickstuff CLEG 2 brakeset ($595). Trickstuff claims this is the lightest set of hydraulic disc brakes on the planet, and the minimalist design is sure to turn heads. 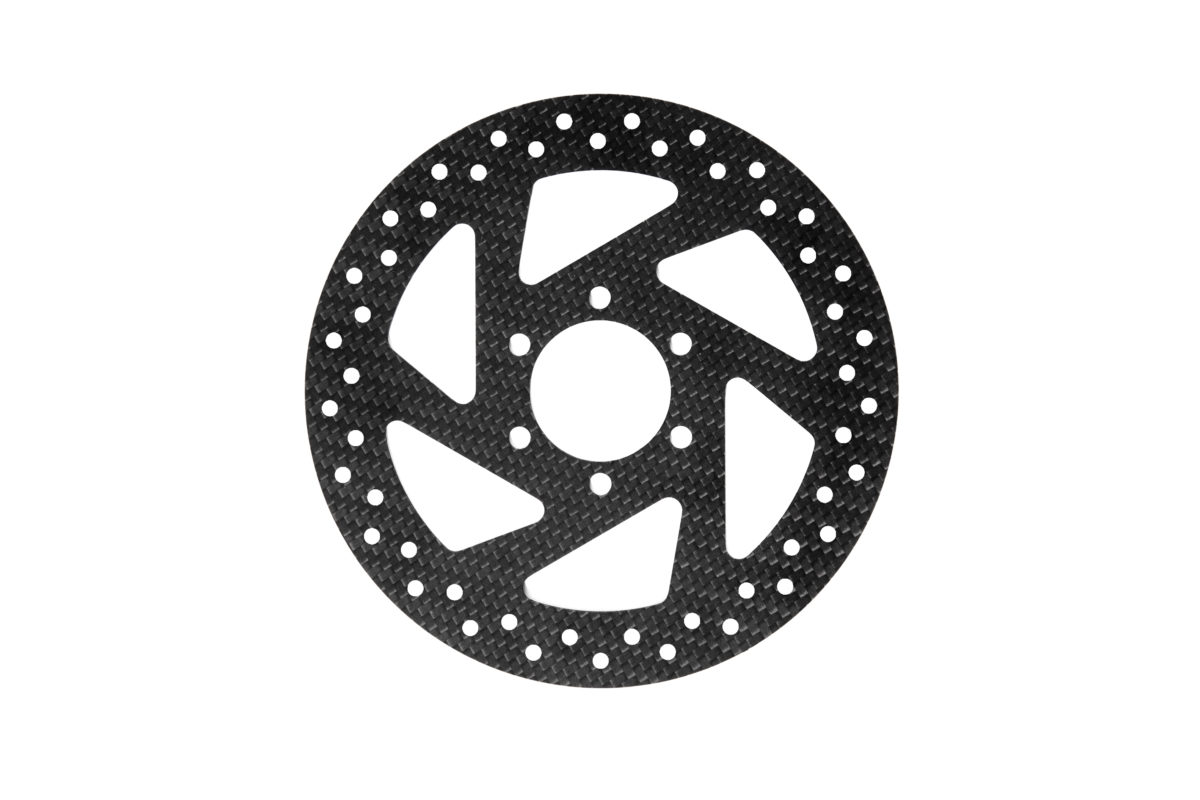 The Trickstuff brakes don’t include rotors, so why not go for a set of ceramic rotors from Alpha? A pair of rotors weighs just over 100g and is priced at roughly $180 USD. Note: Alpha recommends running at least 180mm rotors for XC riding, which is larger than a typical XC rotor. The necessary bolts (titanium, natch) and adaptors are not included in the overall cost.

It’s pretty easy to blow a lot of coin on a set of wheels, especially going the custom route and choosing the most expensive rims, hubs, and spokes that money can buy. Plus, there is the added expense of having the wheels built. Instead of spending money and time, I chose to go with the most expensive stock set of XC wheels I could find: the Enve M525 carbon fiber wheelset ($2,800). The good news for buyers is these are not just race-day wheels; they’re designed to be ridden daily.

For tires, it’s hard to find a lighter, racier set of XC skins than the Schwalbe Racing Ralphs. There are many variations on this tire, but at $104 MSRP (per tire), the tubeless-ready, Double Defense, SnakeSkin 29×2.25″ version is one of the most expensive.

I found a $430 Selle Italia SLR Tekno saddle that utilizes carbon fiber not only for the cover and shell, but also for the rails. Crankbrothers claims the Eggbeater 11 pedals are the lightest mountain bike pedals in the world, designed for pro-level XC racers. The $450 pair of pedals utilizes titanium for the spindle, body, and wing for a total weight of just 179g.

The BMC Fourstroke 01 frame includes a carbon seatpost, though many riders may prefer a dropper post. Since the frame already has a seatpost, I won’t add the cost of a separate post. However, the KS Lev-CI carbon dropper post is a good lightweight, short-travel option available for $515 MSRP.

Carbon mountain bike handlebars tend to be expensive, but apparently not as expensive as titanium ones. The most expensive bars I could find are the Thomson Ti Riser bars at $389, which are priced more than $100 higher than the flat version. A fancy bar like this deserves to be supported by a high-end stem, and Enve has just the thing for $265. 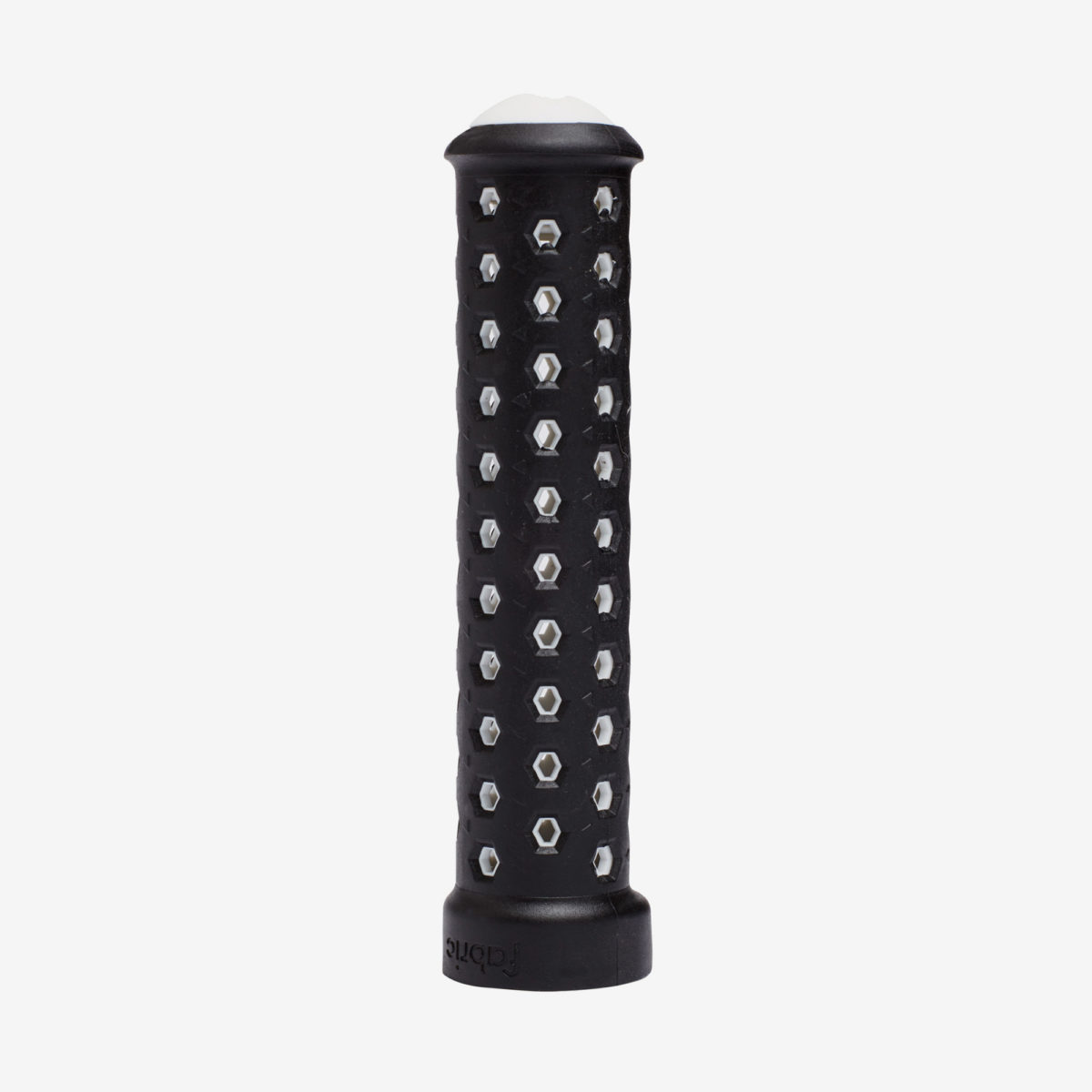 Finding an expensive set of grips for an XC bike isn’t easy; the more expensive grips tend to be leather (heavy) or designed for ergonomics rather than racing speed. I finally settled on the Fabric Slim grips because they are some of the lightest lock-on grips available, and they cost slightly more than an average pair at $35.

Fortunately, the BMC Fourstroke 01 frame includes a seatpost collar and headset so there’s no need to add additional costs for those items. The frame includes bosses for a single water bottle cage, so buyers might want to pick up a Serfas Vendetta carbon fiber bottle cage for $55 (bottle not included). A chainstay protector would probably be a good investment as well. 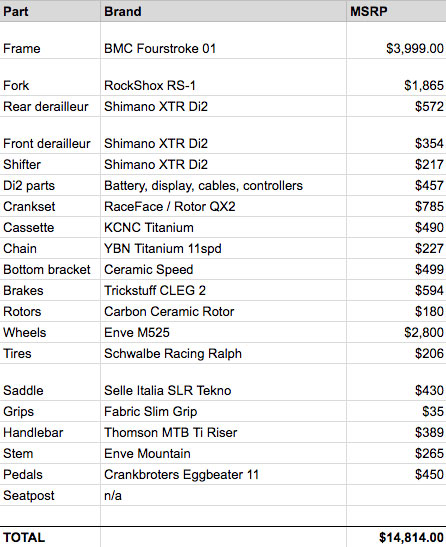 Building up a BMC Fourstroke 01 mountain bike with the options outlined here will cost $14,814 as of the time of this writing. Of course, that’s retail pricing, and actual component prices may end up being lower. 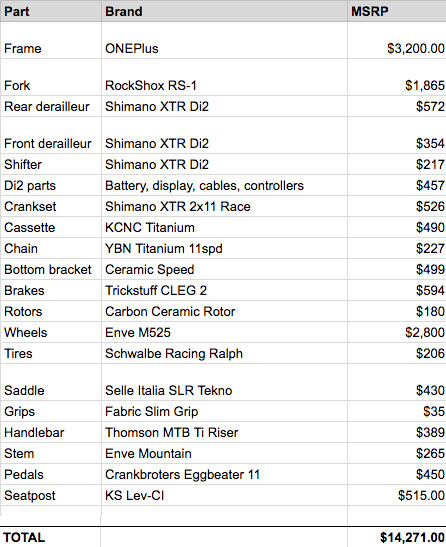 In researching this build, I pursued an alternate path with an OpenCycle ONEPlus, a carbon 29er hardtail that weighs under 900g. The frame itself costs less than the BMC Fourstroke 01–$3,200–but it doesn’t include a seatpost. Adding in the KS Lev-CI, the cost for using the same parts as the BMC build comes to $14,271–just $284 less than the full suspension build. To put that difference in perspective, a high-end rear shock costs nearly $500.

It Could’ve Been Worse…

I have no doubt that there are more expensive mountain bike frames and components than the ones I chose for this build. The more bespoke the build and the more exotic the materials used, the higher the price tag will be. Seeing that $1,000 derailleur pulley wheels exist, clearly the sky is the limit.

Your turn: Where would you make changes to this build to drive up the price even more? Would you be interested in owning a bike like this?

Trails
The 12 Best Mountain Bike Destinations in the USA [2022]
Gear
The Deal on this Ibis Trail Bike is Good AF
Gear
How to Find the Best Prices on MTBs and Gear,...
Trails
Tennessee's Smoky Mountains are Full of Good Trails and Good...
Subscribe
Login
Please login to comment
6 Comments
Most Voted
Newest Oldest
Inline Feedbacks
View all comments

Reading this article made me wonder and perhaps it would be a good topic of an article, but how much better/faster do these high end, $10K+ bikes make us? We all know riders like Gee Atherton or Greg Minnaar would smoke most of us on a single speed Huffy. Taking away the professional riders, do these $10K bikes truly make us faster, better riders? Do they provide any more fulfillment or joy that a $5k bike doesn’t? Is the juice worth the squeeze?

I’ve never ridden a truly elite bike so I can’t answer those questions. I do know that going from a $500 hardtail to $5k full suspension, carbon bike was life changing. Could the same be said for going from $5k to $10k? I guess I can’t fathom it being any more fun or it making me that much better of a rider. This is probably a good thing for the sake of my marriage.

Great question! My goal with this build was to max out price, and honestly if the goal was to build a high performance XC bike, some of my choices would have been different.

It’s all subjective, but I think it’s pretty safe to say that you get diminishing returns to performance as you increase the price of a mountain bike.

Greg and Gee are both downhill racers that ride in 4 minute spurts and only pedal when the course gives them a chance to sprint. If you’re used to doing 30-50+ mile XC and fairly good at it, you probably could hold your own with them, even on a $5k bike.

Pics or it didn’t happen 🙂

Seriously. I wanna see this bike… one of you super rich bastards should build it.

You already know the bike was never built.

If that chain really is titanium that’s a pretty good price at $205. I was disappointed in the weight of it. I expected it to be a little lighter than 209g. My KMC chain is 223 grams. Though the advertised wight was 245 to 265 grams. Maybe the advertised weight is lower as well.

FYI KMC gold 11s super light is about $50 or less. Very good buy. For those looking for high performance without the cost. 11s chain will work on 9s drive chains.