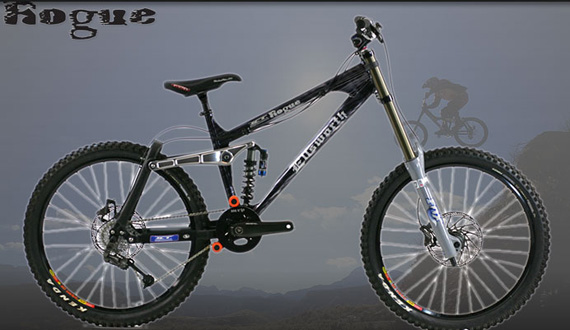 Yesterday I got a chance to test out the Ellsworth Rogue. For those of you who are unfamiliar, this bike is a 6-7 travel freeride bike. I wont lie: it was tons of fun. The test rig was set up with a mix of Saint and SRAM components. Suspension was taken care of with a FOX 40 up front and a DHX4 in the rear.

I decided to take a shuttle up to the top of the hill since, after all, the Rogue is really designed to go down more than up. If you wanted you could pedal to the top – pedaling the Rogue is efficient enough – but with 98 degree temperatures outside I decided to take the easier route. For those who havent ridden Bootleg, it is dry dusty terrain with sharp rocky sections. To add to the fun you’re essentially 2 feet from falling off a rather steep slope on most occasions. FUN!

Now this is not a full review but I have to say that the bike did a good job handling the winding, dusty trail. The Rogue felt really great once the trail started to point down and got gnarly. I found that the rear suspension did an excellent job absorbing the rocky terrain of Bootleg and as long as the ground wasnt too sandy the Rogue did a good job weaving between rocks.

In the spirit of full disclosure, I did tank the bike on an off camber sandy turn (my bad… too fast). But my crash did bring to light an interesting trait that may be of interest to some of you. Basically I found that with the rake of the fork and a bit too much bike lean the front tire feels surprisingly light on the trail. Being unfamiliar with the bike I ended up over-correcting and losing the front of the bike.

Overall the Rogue is a well built bike with fine frame craftsmanship that you really need to see to appreciate. If you have a chance, take a test ride for yourself!

Gear
The We Are One Arrival Is a Mid-Travel Bike With...
Progression
Mountain Biking with Asthma: How One Elite Athlete Controls it
Trails
An Intro to Bikerafting: How it Works, and How to...
Culture
Singletracks Best Reads: June 2022
Subscribe
Login
Please login to comment
2 Comments
Most Voted
Newest Oldest
Inline Feedbacks
View all comments

I thought that this was you writing this up Element. I just could not see Trek on this sick looking rig. I’m not even sure if he could handle it. Sorry Trek! (Ha! Ha!)

Man, I bet you had some fun on this sweet rig. Looks like it could handle a lot of abuse thrown at it. What the travel on that fork bro? BTW, what was the stock weight of that Rogue? Looks like a cool 38 plus pounds. Sounds like you two are having a lot of fun out there. Wish I was there with you. Have you had the opportunity to ride the Trek Session 77 or 88? Hey, if they have any of the new Sinisters out there, give one a shot bro.

I didn’t weigh that one in but the test bike had some older components on it..The new version which I will post a photo has a Fox 40 which is 8 inches of travel, you could put a 7 in on it as well if you wanted more of a FR type bike.