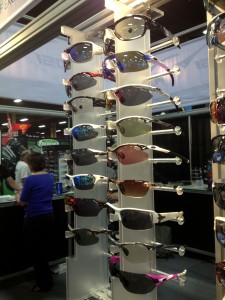 Founded 10 years ago in 2003, the Watkinsville, Georgia-based company by the name of Tifosi has quickly turned into a major force to be reckoned with in the performance sports eyewear market.

While other companies sell shades that cost $200 or more (sometimes much more), most of the Tifosis you’ll see are in the $50-$100 range. However, that doesn’t mean that these are cheap shades: Tifosi thinks that people should be able to afford high-quality eyewear without breaking the bank. This is a sentiment I can totally support, as I personally will either drop, sit on, scratch the lens of, or straight up lose every single pair of glasses I ever own. Not having to sink hundreds of dollars into a replacement pair is a huge plus.

The sheer number of glasses on display at the Tifosi booth was daunting. Everywhere you looked there were glasses, glasses, and more glasses, with 25 different models and enough color and lens combinations to make your head spin. 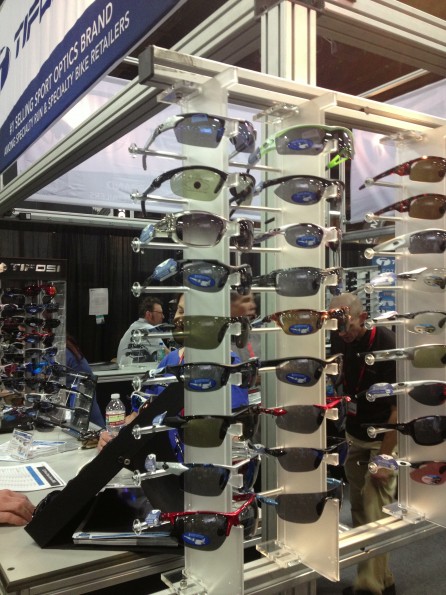 Tifosi also just released a new bifocal “Readers” design, which allows cyclists with vision issues to easily their GPS, bike computer, and see the trail below them. MSRP: $50.

I am liking those Lore shades…

Nice! Are all of these polarized?

I bought Tifolsi Tyrant Fototec Polorized last month and i have to say they are the best sports eyewear I have ever owned. The quality that they are for $100.00 is unheard of. These Lore look great as well.