I owned the first version of the Contour HD helmet cam., and if I was to use one word to compare the new Roam model to the original it would be: refined.

While the original Contour captured great video, it was a bit of a chore to use and it didn’t react well to changing light conditions. Contour definitely listened to their users and they have provided some seriously upgraded features with the design of this latest model, while still hitting a decent price point of $199.

The Roam includes two double-stick camera mounts that are suitable for a skate or snow type helmet, but these don’t really work for mountain biking. The Roam also comes with a sheet of paper that emphatically insists you will need to get a MicroSD card before using the camera, however mine shipped with a 2GB card installed. Either way, before you hit the trail you will want a larger MicroSD card and a decent mounting option for biking. I purchased a 32GB SanDisk card and this mount: 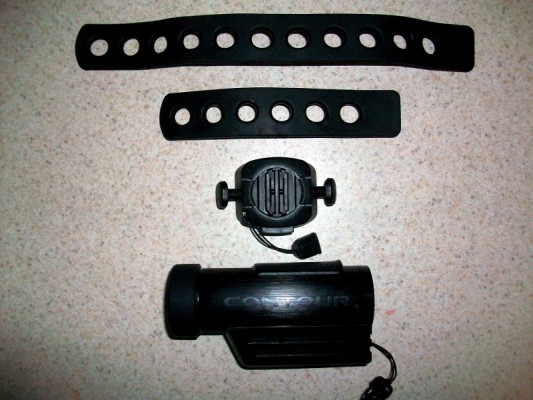 The mount is a littlepricey, but it more than makes up for it with the various mounting options it allows. It consists of two rubber straps–one short, one longer–and a beefy base that can rotate 360 and lock into place with the push of a button. The long strap is perfect for helmet or top/down tube mounting while the shorter one is great for attaching the camera to handlebars, seatpost, or even a fork leg. One BIG improvement in the mounting department is the addition of a standard threaded tripod socket. When combined with a mini tripod or Gorillapod you can easily grab your own “ride-by” shots to edit in with your POV footage.

As I mentioned, Contour refined almost everything about this camera. On the old model, you had to hold a button down for three seconds and wait for the beep to know it was on, then you would slide the recording button forward to start recording. The camera would also shut itself off after a preset amount of time,requiringyou to do that again, usually too late to grab the video you wanted. Now all you do is slide the record button forward to start recording, and slide it back to turn off. There’s zero guess work, and it’seasilyaccomplished while riding. Another nice feature is you can disable the beeping when turning the camera on and off. I found the loud beeps to be annoying in general, and disabling them allows you to grab ‘stealth’ footage of your friends. 😀 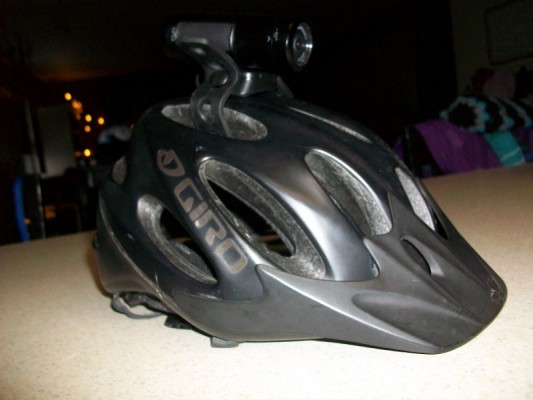 The back of the camera seals with an upgraded hard door with a locking latch. This feature, combined with a built-in gasket, helps keep the camera waterproof to a depth of three feet. While I don’t have any plans to take it snorkeling, it should help out in the occasional rain storm on the trail.

Since the camera can be mounted in a variety of ways, the lens rotates 180 so that you don’t end up with sideways or even upside down videos. Pushing the button on the back of camera twice activates a laser beam that projects a solid line for fine tuning the alignment.

Camera settings are managed via an application installed on your Windows PC or Mac. You can choose from three resolutions: 1080p, 720p, or 960p which is a tall and narrow field of view. Another new feature is the addition of “time lapse” mode where you can grab a 5 megapixel still frame every 1, 3, 5 or 10 seconds. You can also adjust the mic gain and lighting settings, but I left both of these on default and the camera sensor’s light and sound sensitivity is greatly improved over the old model. Here is a video I shot with lots oftransitionsbetween bright sun and fairly dark shade and it handles it seamlessly (sound has been edited out).

Inside the back door, the Roam has an internal battery, and a single, included, USB cable handles charging and file transfer. The MicroSD card can be removed and used in a card reader, but unless you have long fingernails is is a pain to get it out. Up top there is the large on/off slider button, as well as two status LED icons: one for battery and one for the memory card.

Out on the trail this camera has been great. The new on/off switch is easy and I can quickly move the camera between a variety of mount points. So far the rubber strap setup is holding up well. Back at the PC, charging and copying the videos is a snap over USB, and another neat new feature is a thumbnail image that accompanies each video file, making it easy to identify which clip you’re looking at.

My only complaints so far are that the camera will sometimes turn itself on inside my duffel bag. (Once out on the trail though, the recording switch has nevermoved from where I put it.) The red laser line for aligning the camera is pretty much invisible in bright sun, and it would be nice to be able to change the video mode without having to connect to a computer.

The Countour Roam may not include GPS or Bluetooth compatibility like it’s fancier siblings, but what it does include is a respectable set of features at a competitive price point. If you’re the type if rider who wants a simple, durable camera that captures great video and you don’t want to spend a ton of cash, this is the model for you.

Thanks to the folks at Contour for sending over the Roam for review!

Gear
Mountain Bike Tire Repair Tips: From Emergency to Semi-Permanent
Gear
These MTB Deals are Fire, including 40% off Patagonia Dirt...
Gear
Never Underestimate the Power of a Good Zip-tie
Gear
The Maxxis Minion DHF Tire is Still the One to...
Subscribe
Login
Please login to comment
12 Comments
Most Voted
Newest Oldest
Inline Feedbacks
View all comments

My mileage varied. In other words I do not come to the same conclusions.

It is terrible at picking up voices and the firmware upgrades have not fixed it.

The flex strap, on VERY bumpy terrain, does not stay put…not matter how much ungodly brute force one uses when using the tightest “hole”. TIP—get a RAM mount—soooo much better.

Those are my main beefs and after that I agree that it’s a very nice cam ..and I use both at the same time.

Glad to hear about the refinements. Not a lot at that price point for helmet cams so it definitely seems like a good option.

Contour recently came out with a bike mount bundle that includes a fixed mount (like the RAM), vented helmet mount, and the flex strap you mentioned. I wish they would include at least one reasonable bike mount in the package but I guess that’s how they’re able to keep the price below $200.

@armyslowrdr, I’m still using the camera with zero issues. I don’t really bother with the short strap as the long strap works about everywhere I need it to. Since I became aware of the switch turning itself on in my duffel bag I have taken to putting it in its own pocket and have had no further issue. The switch has worked perfectly for while the camera is in use.

@trek7k, I think they made the right decision with including the two mounts suitable for a snow or skate park style helmet. *I* would rather have them include the strap mount, but I do realize that they are providing what the broader market demands.

I like that it has a very different shape than the GoPro, which naturally lends itself to a different variety of mounting options. If you were serious about capturing video, owning both a gopro and a contour wouldn’t be a bad idea.

IMHO, CONTOUR Fell real short on the mark with this cam. No 60fps & Having an internal battery that cant be changed in the field really takes away from whats supposed to be an Action Outdoor cam. they should of kept the worthless 2GB card and pur more R&D to the battery issue.

I did like the replaceable battery on my old one, and 60 or even 120fps would be nice, but IMO there are other cameras for that. At the $200 price point I’m really pleased with this camera overall.

On a separate note, as a linux user, having to hijack my daughter’s netbook just to change camera settings is a pain. On the old one I could just jigger the config file by hand, but that doesn’t work on this one, nor does it work via wine or even a virtual windows machine.

Can someone fill me in on what a “Big Deal” helmet cams are?? I mean how much footage of the trail whipping by you can you watch? Hey honey!..want to see the trail I rode today? You can only see my sweet handlebars but look…. isn’t this trail awesome….Yawn..

Other than watching the dude in front of me…Whats in it for me? Someone please let me know….

@Spartan, i can tell you that the videos I have made of Florida MTB trails has not only helped me make a business out of it, but i’ve also had the pleasure to show people not only in every state in the USA but also 97 countries around the world(based on 12/8/2011 analytics) that there is A LOT of Mountain Biking in Florida. Just on YouTube our “dudes in front of me” mountain bike videos have received over 829,910 hits. I guess, you either like it or you dont, if once you start doing it, its addicting.

Forgot to mention the almost 450,000+ hits our website has received too.

Sweet proedgebiker…give us a link to your stuff..