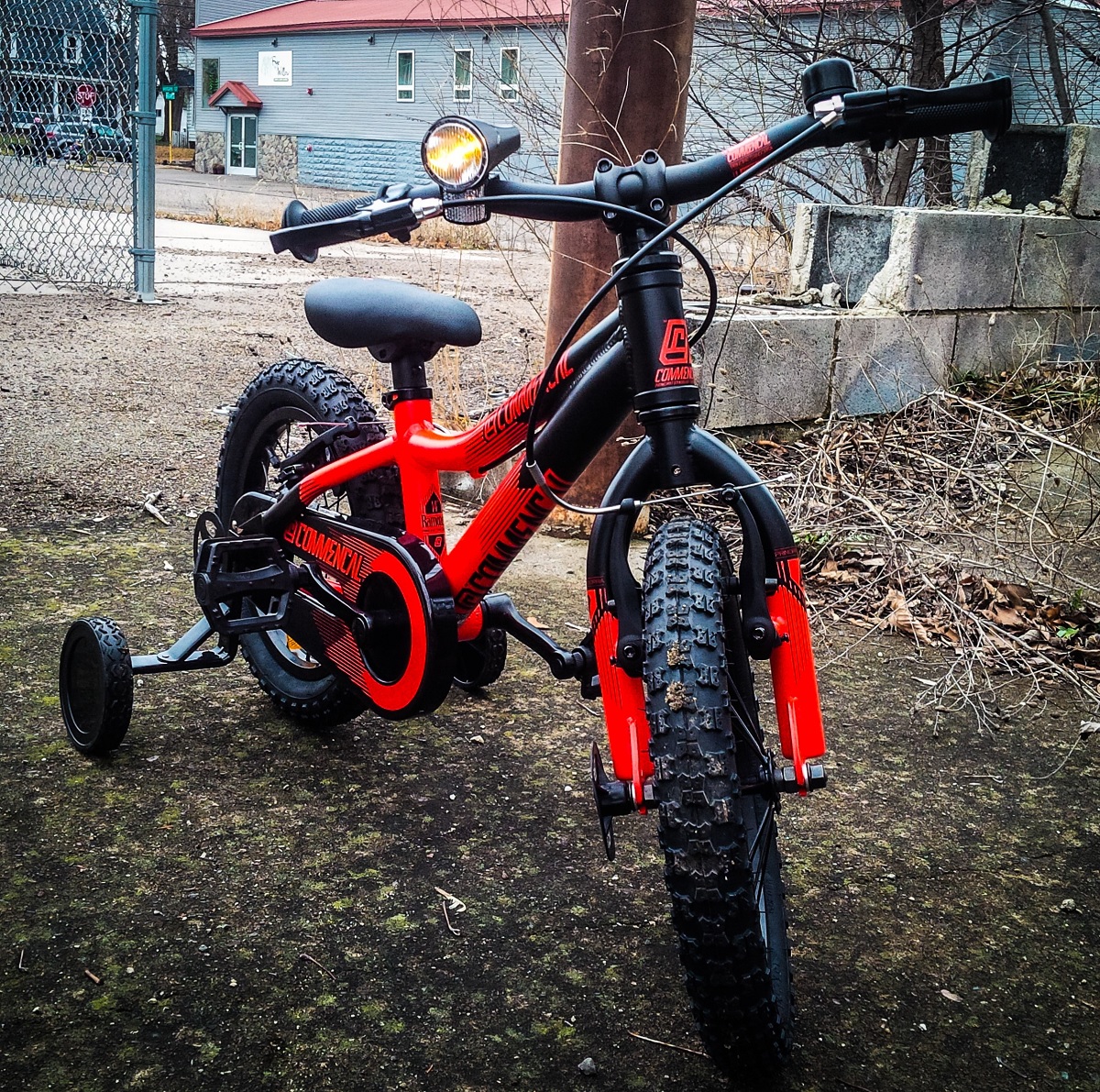 I have two little girls, a 5-year-old and a 3-year-old, and I haven’t had any luck getting them to ride the push-bikes I bought for them. Push-bikes have been the rage lately, but every time I’m in a bike store my girls go right to the pedal bikes. When the beautiful red machine pictured above arrived in the mail my 3-year-old was instantly captivated. I basically have to pry the girl out of the saddle to take part in other activities such as: eating, sleep, or having any interaction with the rest of the family. It all goes to prove you should never completely dismiss “old school” thinking (and I couldn’t be happier).

My daughter and I put the Commencal Ramones 14 Red 2016 kid’s bike together in the kitchen, which only took a few minutes. The bicycle comes with a handlebar light, which kind of made me laugh. The light really isn’t bright enough to use for actual riding, and I don’t plan on sending my daughter out on nighttime rides anyway. However, she absolutely loves the accessory, and I started to see the wisdom of including a light. After all, my bicycle has a light on the handlebars, my daughter’s bicycle should also have a light on the handlebars. If one is not there, she’s going to wonder why–and she loves that light.

When my wife came home the evening the bicycle arrived, my daughter said, “Look at the bike I built, daddy helped a little.”

Purchasing a kid’s bike requires a completely different approach than buying a bike for a seasoned cyclist, and it’s important to put yourself in the right frame of mind. After years and years of riding, I’d completely forgotten the timid first steps all cyclists take, and I found it eye-opening to observe as my daughter learned how to ride.

The Commencal has a solid, sturdy frame. This bike can take all the abuse a 3-year-old can dish out (which is more than you might imagine). Unlike some kid’s bikes you see out on the market, this is a real bike that performs as a bicycle should.

I elected to start off with the included training wheels, which went on easily. I left the rubber caps on the axle bolts as protection against inevitable abrasions. 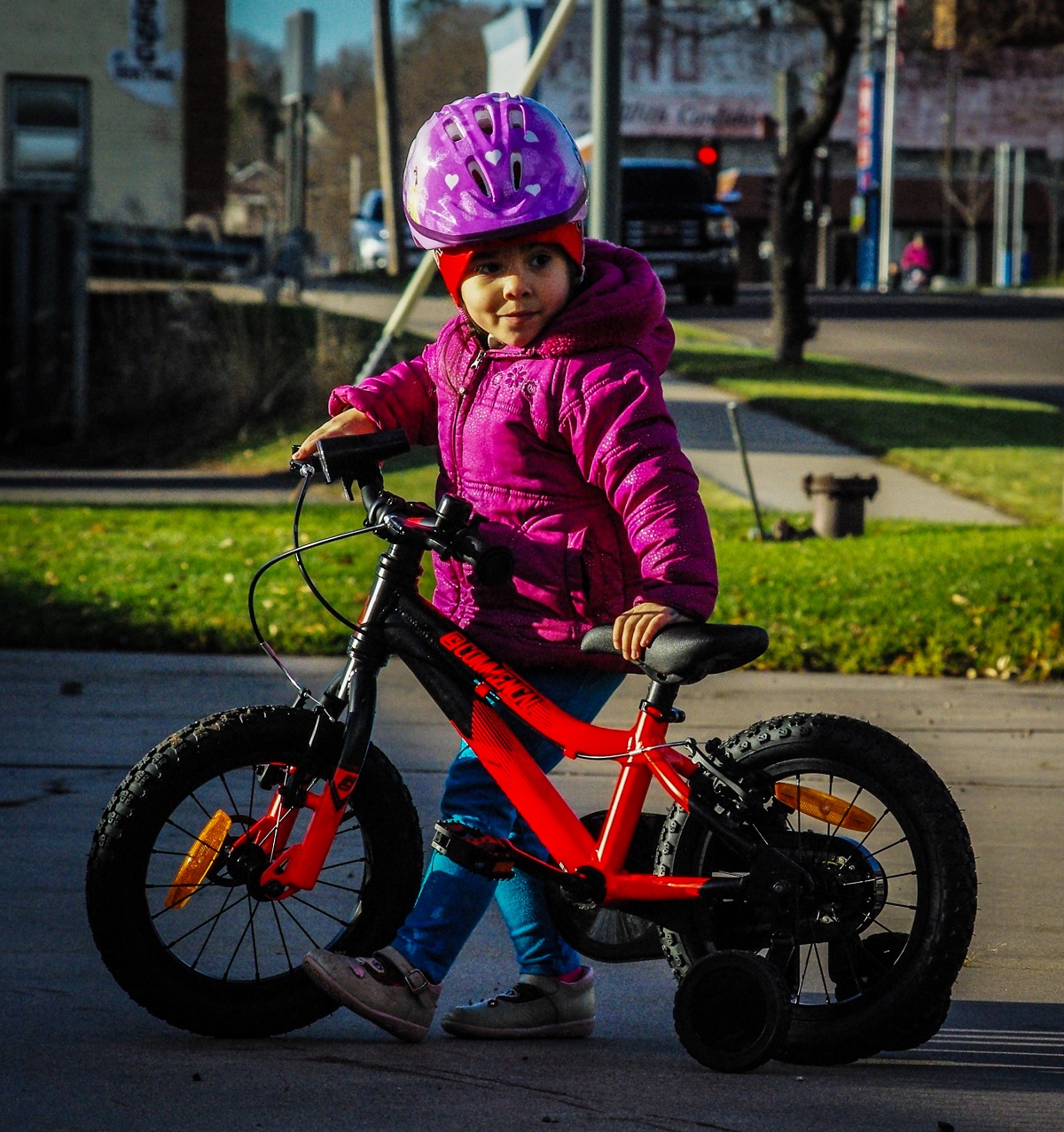 My first mistake was to set the seat to the proper height. Sure, it’s nice to have a comfortable leg extension if your purpose is to go on a five-hour ride, but if you haven’t figured out balance yet it’s a huge advantage to have the seat low enough so you can easily touch the ground while seated.

Once I dropped the seat, I could pretty much leave my daughter alone to teach herself. She quickly started hopping on and off the bike, and I saw it was light enough for her to push around where she wanted, or reorient as needed. She rarely got frustrated, and pretty soon she was charging at me commanding me to run so that she could chase me.

The Commencal comes with V-brakes but after a couple months of riding, my daughter generally still coasts to a stop.

Editor’s Note: The Commencal Ramones 14 only comes with V-brakes.

She also loves the bell, as you can see in the above photo. Even the color is good, as the bright red seems to be equally appealing to boys and girls.

This bicycle can be adjusted to fit both my 3-year-old who is about 3′ tall and my 5-year-old who is 3’6″. You always want to get a child on the largest possible frame that fits them safely, and this bike will fit my younger daughter for quite a while.

The girls like to ride their Commencal, and I like that it’s a quality machine that can hold up to whatever they dish out. It’s a huge amount of fun.

Thanks to Commencal for providing the Ramones 14 Red Kids Bike for review.