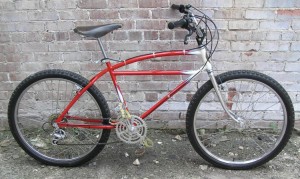 Just in case you missed out on the government’s cash for clunkers deal, a couple bike shops in Oregon and North Dakota are offering their own version. Joe Bike in Portland is offering up to $200 off a new bike if you trade in a repairable bike or car. At the Bike & Ski Shop in Grand Forks any rideable bike will get you at least 50 bucks off a new set of wheels.

Some bike manufacturers have offered similar trade-in deals in the past. In 2005 Ellsworth offered customers up to $700 off a new Moment mountain bike if they traded in any Ellsworth bike. Cannondale supposedly offered trade-in customers 20-25% off new frames many years ago, though the program wasn’t very well publicized (if at all).

Of course a Klunker (with a K) is actually a treasure in the MTB world. Just this weekend I rode with a guy who was riding an LL Bean mountain bike frame from the late 80s/early 90s that was choice – a real piece of history. If you’ve got one of these antiques, hold on to it – it may just increase in value!