Even though I had dipped my tires into the Phil’s Area during my first ride in Bend with Cog Wild, I didn’t really count that as a true Phil’s experience.

If you spend any amount of time in Bend, you’ll hear about the Phil’s Trails. With roughly 55 miles of singletrack in the Phil’s Area (with numerous trails connecting into Phil’s from the massive network in the surrounding Deschutes National Forest), there is plenty to explore… and if you want to ride from town, you can access the singletrack from trailheads on the outskirts of Bend.

For my first true Phil’s experience, I decided to park at the main trailhead just outside of town. Many of the primary trails in the system, including the namesake Phil’s Trail, begin or end at this trailhead.

I began my route by climbing up the lower section of Ben’s. This smooth, flowy singletrack meanders up the grade toward the base of the mountains at a very gradual rate. 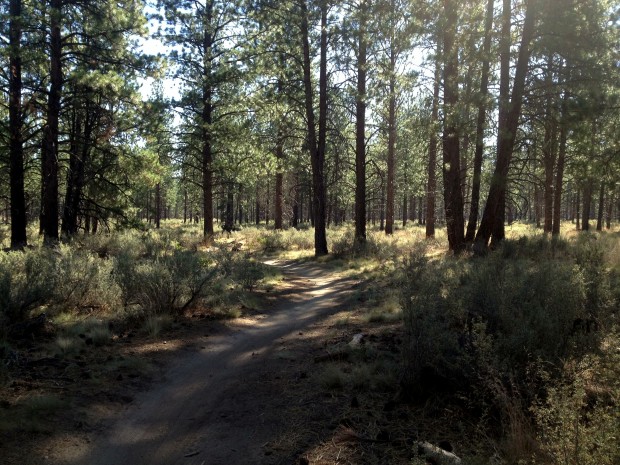 I soon learned that this smooth, flowy, dry singletrack is par for the course here at Phil’s. On average, this trail system is extremely beginner-friendly. While there may be the occasional rock garden or challenging section here or there, even the difficult sections feature ride-arounds and bypasses. Unfortunately, thanks to Summer’s possibly-broken arm, I couldn’t show her this beginner’s mountain biking paradise.

If you’re an advanced mountain biker and you’re worried there’s nothing for you at Phil’s, fear not! In addition to being able to drop the hammer and power through these trails, there are several advanced areas. If you’re a beginner on the other hand, don’t worry, as the advanced areas are well-marked.

As an example,  lower whoops, which runs into the section of Ben’s that I was climbing, is downhill-only. Since I was climbing, I had to hang a right and climb up a nearby doubletrack (road 310) to access  Lower Whoops. When I reached the top of the climb, and my high point for the ride, I came across the coolest bench I’ve ever seen: 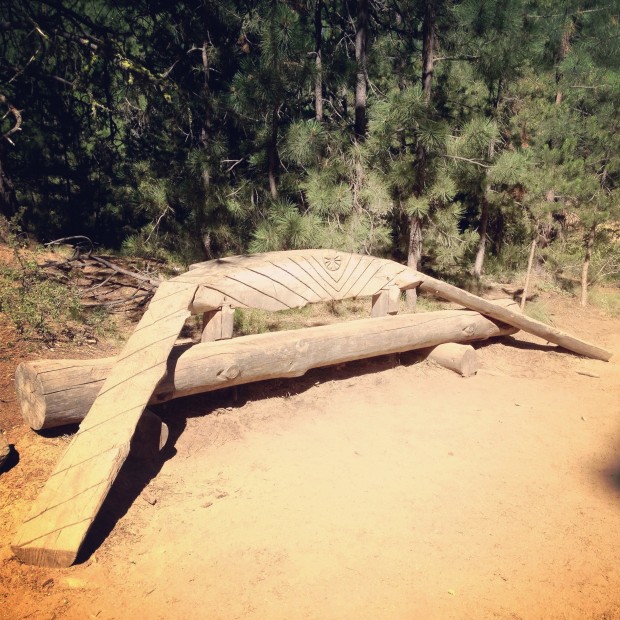 One part bench and one part trail feature, this skinny bench is probably the most functional piece of wood I’ve ever spotted on a mountain bike trail!

OK, enough with the bench. I dropped into  Lower Whoops, following a local rider.

The upper section of this trail is a full-blown flow-style jump trail, featuring table tops, rollers, berms, rhythm sections, and more! It reminded me immensely of a similar section on Tiddlywinks.

After finishing  that section of flow trail, I connected over to the namesake Phil’s Trail. While there were any number of possible trail options, I figured I just had to ride Phil’s.

While I knew I had been gaining elevation as I rode up Ben’s, I had no idea how much that gradual climb would pay off until I dropped into Phil’s! Like Ben’s, the Phil’s Trail descends at a gradual rate, but the open, flowy singletrack allowed me to drop the hammer and amp up the speed, flying through the trees and carving through the turns! 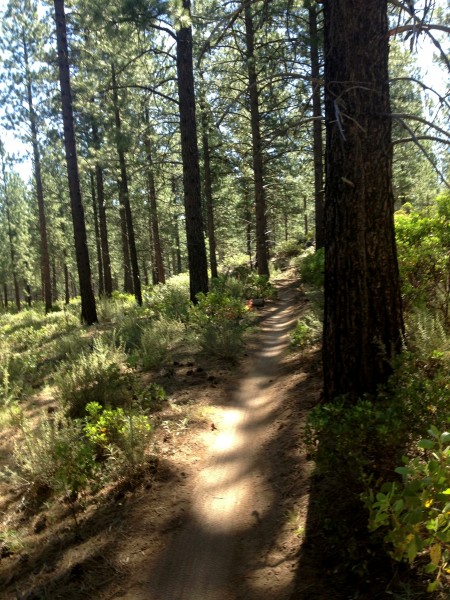 Before I knew it, I was back down at the trailhead, not wanting my ride to be over! But I had a lot of riding planned for the next month, so I decided to conserve my strength, and headed over to check out The Lair Bike Park.

After a few laps through the beginner and intermediate lines at The Lair, I packed up the vehicle, and headed back down south to our campsite, about an hour away.

If there’s one downside to the mountain biking scene in Bend, it’s the limited camping availability. If you want to be close to the actual town of Bend (and with the fantastic beer scene and the trails that start directly from town, who wouldn’t want to be?), you have only one option: Tumalo State Park.

While Tumalo State Park is good for what it is and offers great amenities, it’s crowded, lacks privacy, and unless you book several months in advance, odds are you won’t be able to find a campsite on the weekends.

There are a few campgrounds up in the nearby mountains, but the closest one that we could get a reservation at was Crane Prairie Reservoir, roughly an hour southwest of Bend. While the campground at Crane Prairie was fantastic, it’s quite a ways to the closest mountain bike trail, and a long way from the riding epicenter in Bend.

Pro tip: if you can’t get reservations at Tumalo State Park for the time frame you want and you have the flexibility to arrive mid-week, roll into town early in the day during the middle of the week and score one of the first come, first serve campsites in a campground on one of the lakes in the mountains above Bend. Not only are the views and the lakes fantastic up there, but many of those campgrounds have mountain bike trails that are accessible without having to load up the car!