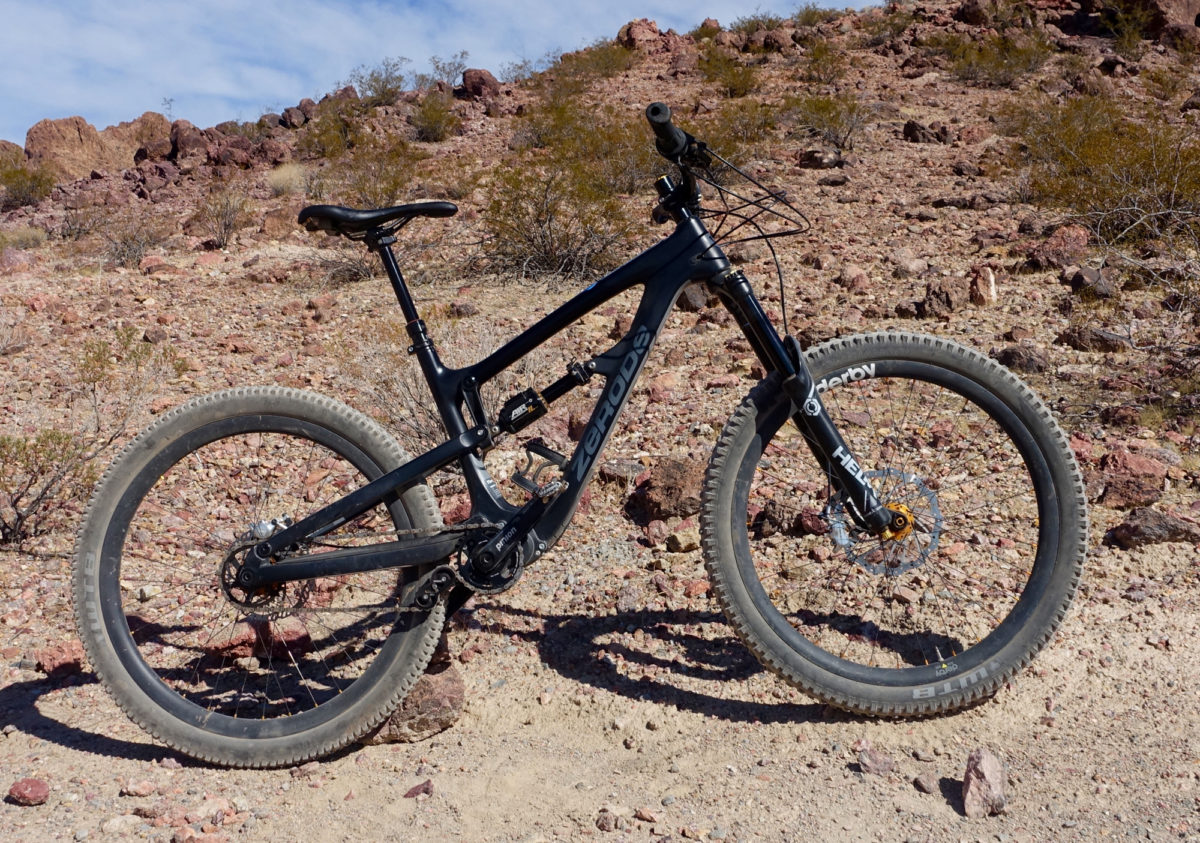 My first ride aboard a gearbox-equipped mountain bike was less than stellar. But I’m not ready to give up on the concept yet, so when I spotted a Zerode Taniwha full suspension carbon enduro bike equipped with Pinion’s newest C1.12 gearbox at Outdoor Demo, I had to take it for a rip.

If you haven’t heard of Zerode before, don’t fret: they’re a small brand from New Zealand, and the Taniwha is currently their only model. But this carbon full suspension enduro frame mated to a Pinion gearbox is a real head-turner.

The head tube angle on the frame is a slack 65°, and if you want more geometry details, you can find a full spec table on Zerode’s website. 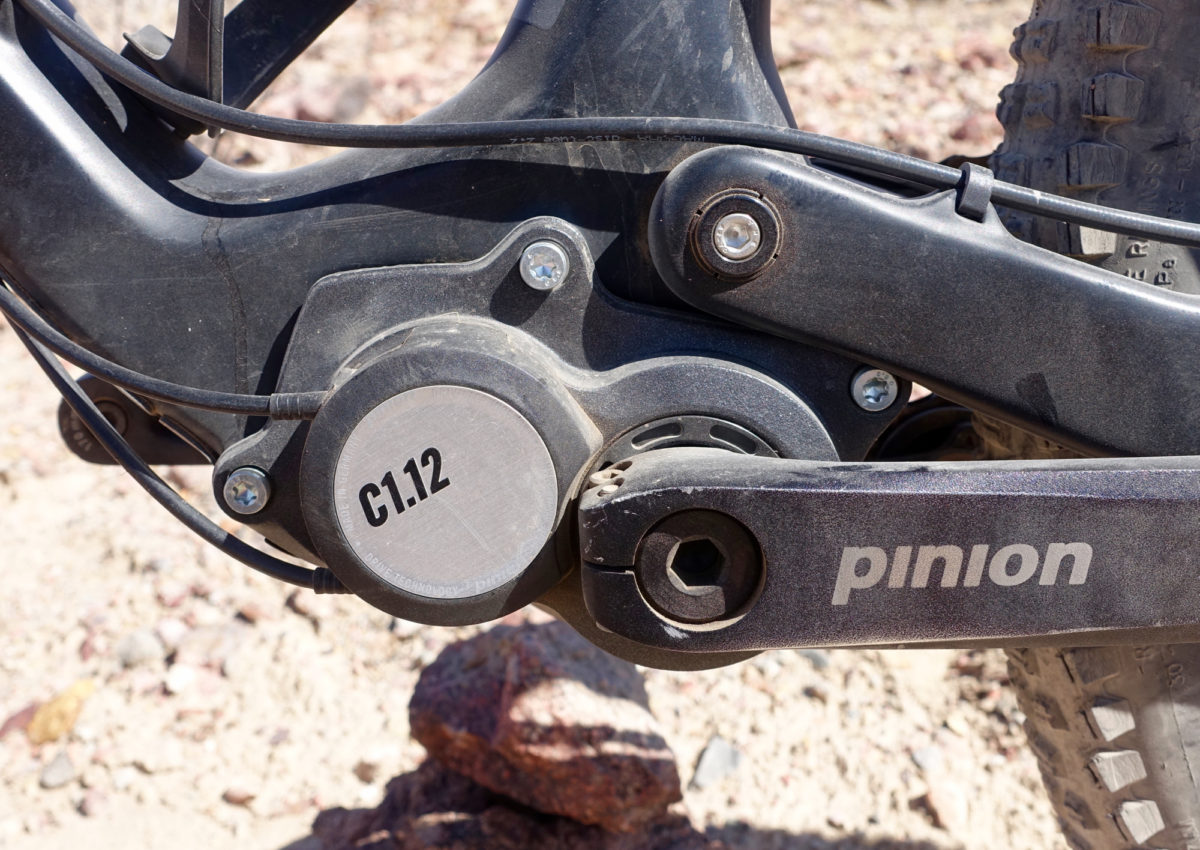 The Pinion C1.12 gearbox mounted on the Taniwha is from Pinion’s newest gearbox line, introduced at Eurobike last year. The internals are identical to the old P-line gearboxes, featuring steel gears, but the exterior of the box is now made of forged magnesium, making the C-line 33% lighter. The C1.12 transmission offers 12 gears to choose from and a whopping 600% gearing range! For comparison, SRAM’s Eagle 12-speed drivetrain offers a 500% range. 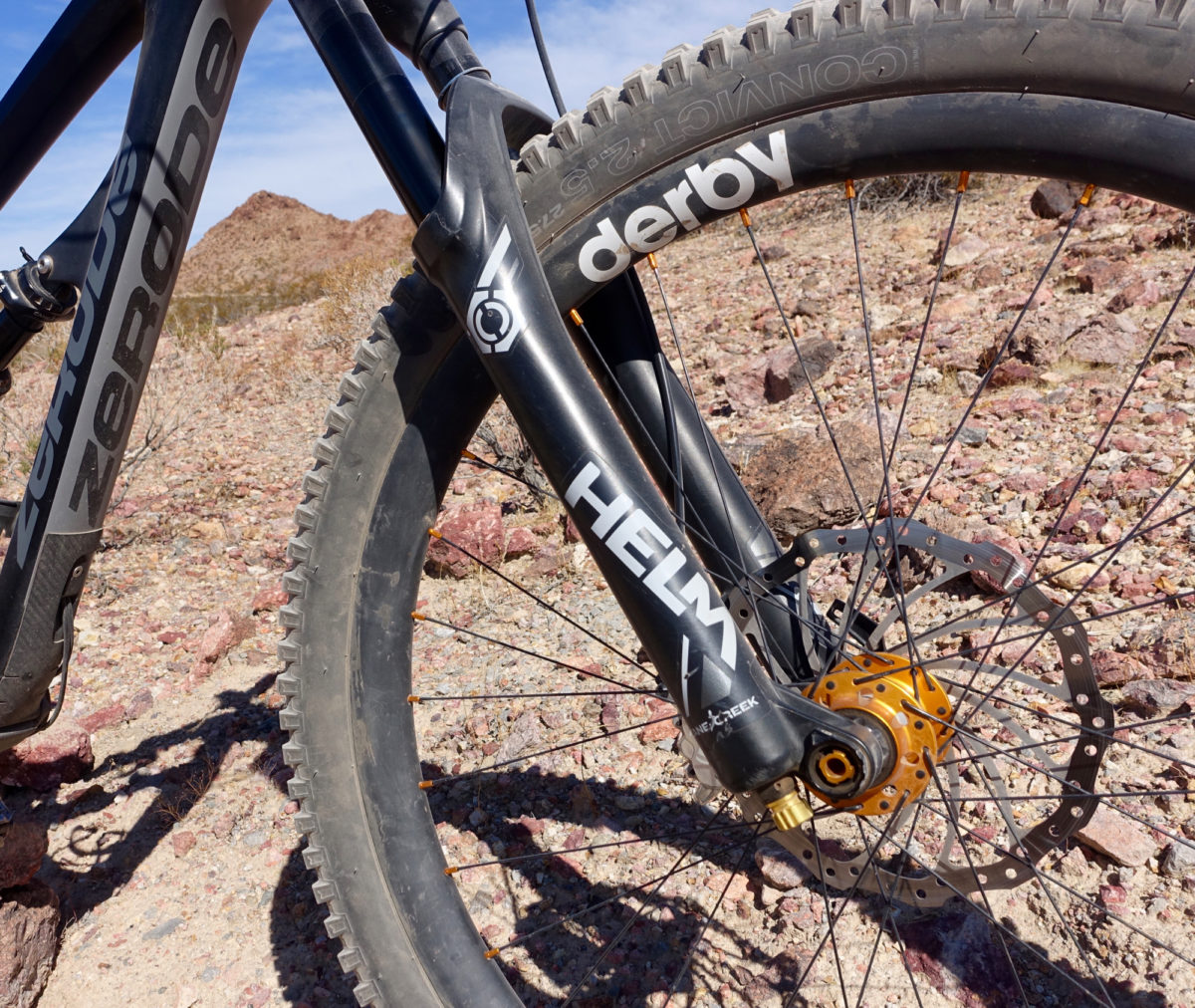 The Taniwha is available as a frame + drivetrain only for $5,000, and in complete builds ranging from $6,500 to $9,500 for the Signature build. I tested the Signature build, which includes a Cane Creek DB Air IL rear shock, Cane Creek Helm fork, Derby wide carbon fiber rims, Magura MT Trail Carbon brakes, and a 9point8 dropper post. This build weighs a claimed 33lbs. 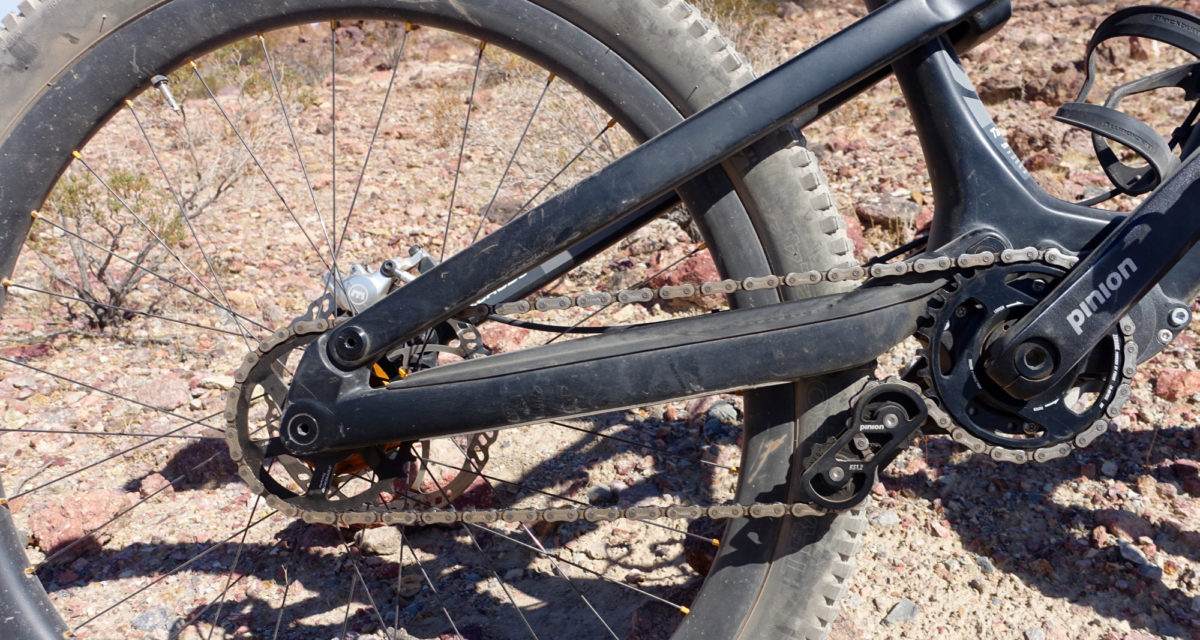 Grinding uphill, the Zerode and Pinion gearbox performed about how I’d expect them to… and the Pinion’s issues that I found in my initial review haven’t gone anywhere.

However, as soon as I pointed the Taniwha downhill, the Pinion drivetrain suddenly made radically more sense to me on a full suspension bike than it did on a hardtail. The difference lies in the weight distribution in relation to the rear suspension: basically, the gearbox removes the derailleur and cassette from the rear wheel and centers that weight at the bottom bracket. In technical jargon, it takes some of the unsprung weight from a standard drivetrain and makes it sprung weight.

Now whether or not having the weight sprung or unsprung is better is a highly technical discussion that we attempted to address in a recent podcast, but honestly, it would take an engineer to fully analyze the variables at play. But I can tell you how the bike rode, in my experience.

Moving the weight from the rear wheel to the bottom bracket resulted in an extremely balanced-feeling mountain bike. I hadn’t realized how much weight is distributed to the rear wheel on a standard bike until I rode this burly, 160mm-travel enduro rig without that weight there. The Taniwha felt extremely poppy, and was easy to get airborne. Launching, dropping, and generally getting off the ground was an absolute blast on the Taniwha!

While 33 pounds sounds like a lot of bike, due to the weight redistribution it descends like a much lighter bike. That doesn’t help you while climbing up the hill but if your goal is true enduro shredding, the Taniwha provides light and agile handling while heading downhill.

Another benefit of the gearbox combined with a tensioner is that there is no noise or rattling from the rear of the bike. Nadda. No chain slap, no derailleur shaking, no rocks getting kicked up and bouncing into (and potentially breaking) a derailleur. Even the best 1x drivetrains with chain guides can’t fully eliminate chainslap in extremely rough, high-speed rock gardens, but the Taniwha was silent in my test.

As an added bonus, while it’s currently only available with a chain drive, I spoke with the folks at Gates Carbon Drive and they are working on adapting the Taniwha to a belt drive system. I think the resulting system would be absolutely ingenious. However, they want to ensure the system is dialed before releasing it to the world.

Is shifting smoothly just a matter of practice? 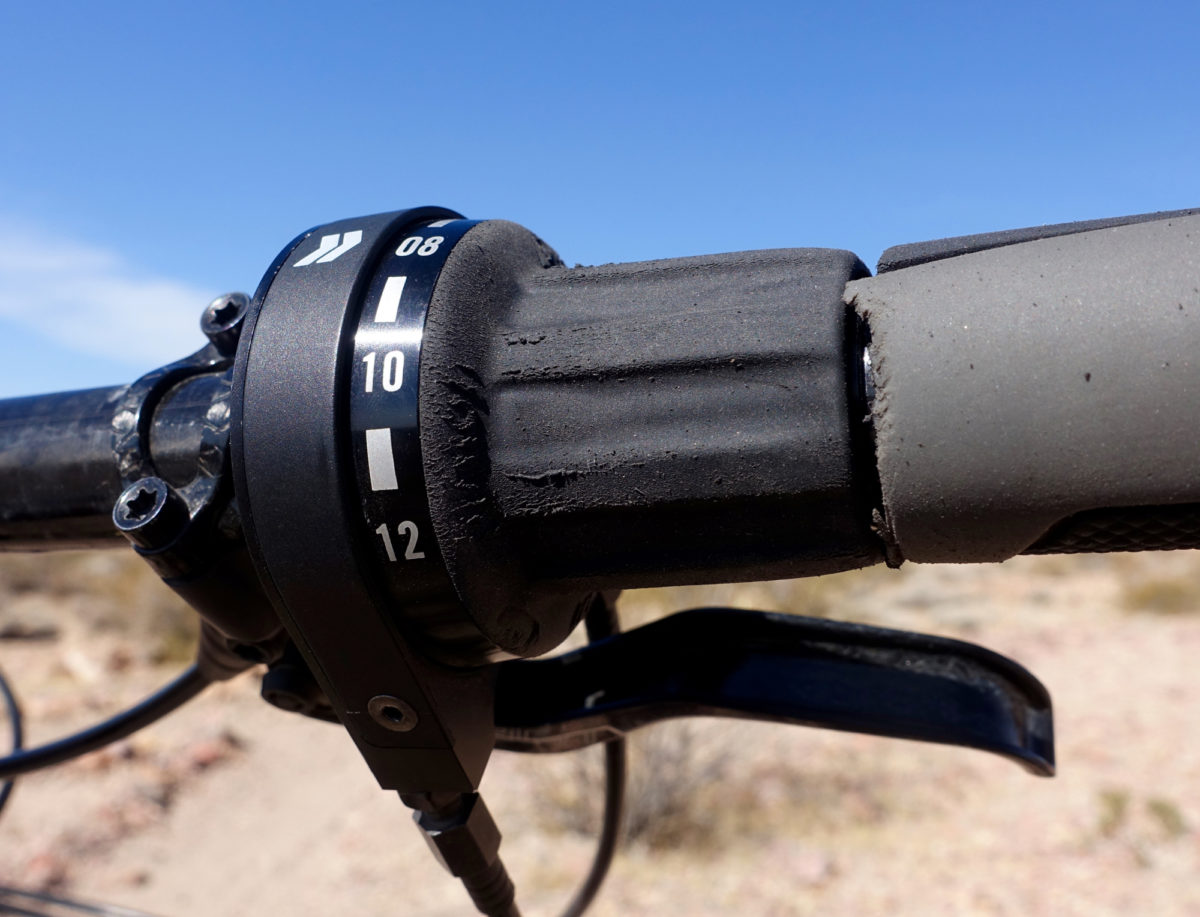 As I mentioned above, all of the shifting complaints from my first Pinion test ride were still present in the C1.12 gearbox, as the internals haven’t changed at all. However, after chatting with a someone who rides a gearbox daily, I came away with the impression that getting good at shifting a gearbox smoothly could possibly be just a matter of practice.

According to the person I spoke with, riders quickly develop a system of clutching the gearbox with their feet, by ever so subtly letting off the pressure to bang a shift, then quickly resuming pedaling. While that means riders do have to back off, as I pointed out in my original article, it does sound like once the timing is dialed the pause could be negligible.

Let’s face it: I now have a total of 1.5 hours of riding time on gearboxes from two Outdoor Demo rides. I normally don’t head out of the house for a mountain bike ride unless I can ride for an hour or more. That means I could easily double or triple my gearbox experience in one mountain bike ride. Consequently, before I can pass a final judgment, I need to spend some serious time testing one over the long term–and I hope to get that chance in the near future.

One problem for the average consumer is that simply getting a test ride on this rare breed of mountain bike seems impossible, unless you happen to go to Outerbike and get lucky. But if you only spend an hour or so aboard the demo bike, based on my experience you won’t be able to spend sufficient time to fully adjust to the system. This appears to be a massive hurdle for Pinion to overcome as they continue to push into the US market. 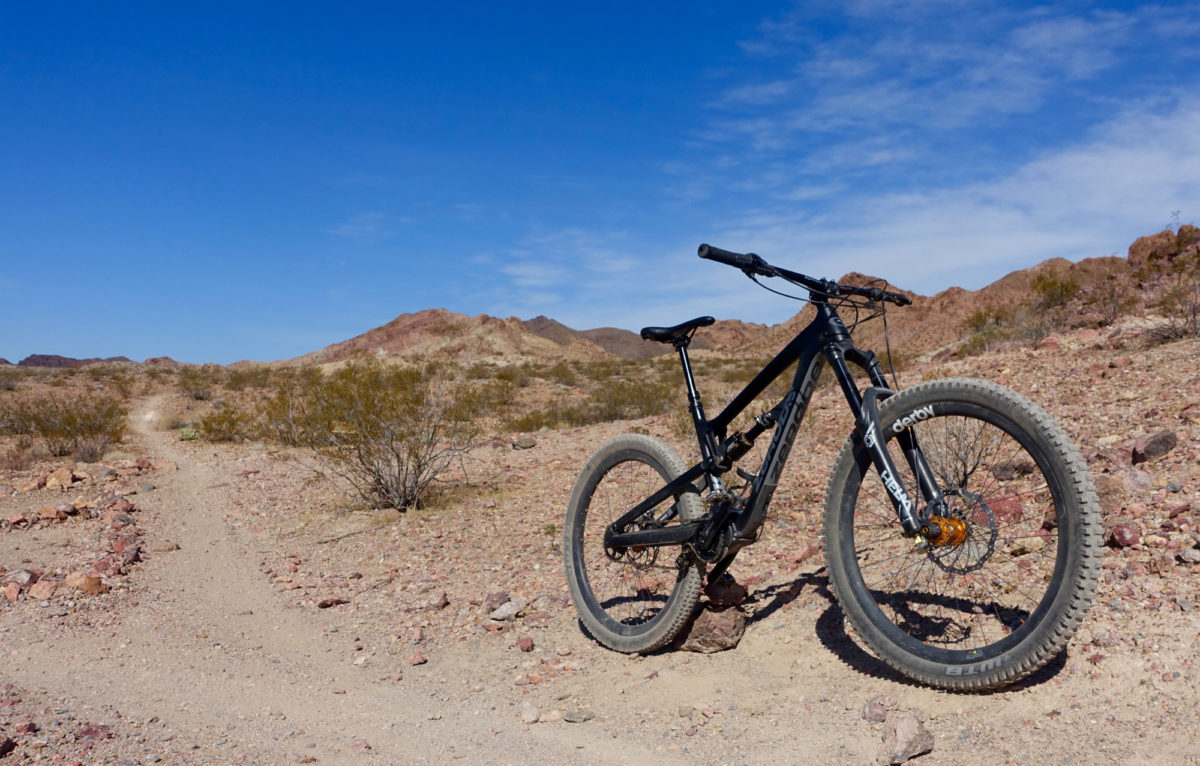 Getting consumers comfortable enough on the gearbox system to pull out their credit card will likely prove to be a major hurdle, but even if that one difficulty is overcome two other hurdles will still remain: the cost and the weight.

The Zerode Taniwha is a top-tier enduro bike by anyone’s definition. The frame is pristine; the ride is confident. But spending $5,000 and not even getting a rideable bike is a tough pill to swallow for most riders. At $9,500 the top-tier bike features a bomber build, but that’s still a pretty penny. While not quite expensive enough to crack our list of the 9 most expensive mountain bikes in the world, it’s not far off.

But for those with the coin to spend, who want a bike that rides superbly well yet stands out in a sea of turquoise, Zerode provides a tantalizing option in the Taniwha.

Gear
These MTB Deals are Fire, including 40% off Patagonia Dirt...
Gear
Never Underestimate the Power of a Good Zip-tie
Gear
Mountain Bike Tire Repair Tips: From Emergency to Semi-Permanent
Gear
The Maxxis Minion DHF Tire is Still the One to...
Subscribe
Login
Please login to comment
2 Comments
Most Voted
Newest Oldest
Inline Feedbacks
View all comments

Their new bike the Katipo is the 29’er version. They also have a mullet. Check out pricing on the website. Less than a SantaCruz carbon in the UK. I have ridden one and can say it’s the fastest enduro bike I have ridden. Right up there at the top of the pile with the SB150.

Wow, expensive and heavy. That is, as you say, a very tough pill to swallow. I still want to test one, but it sounds very much like it’s not quite ready for prime time.