After reading Corey’s mixed review of the Borealis Yampa, I was interested to get on one myself to see if I would have the same results. Finally, this year at Interbike’s Outdoor Demo, an opportunity to ride the Yampa presented itself! 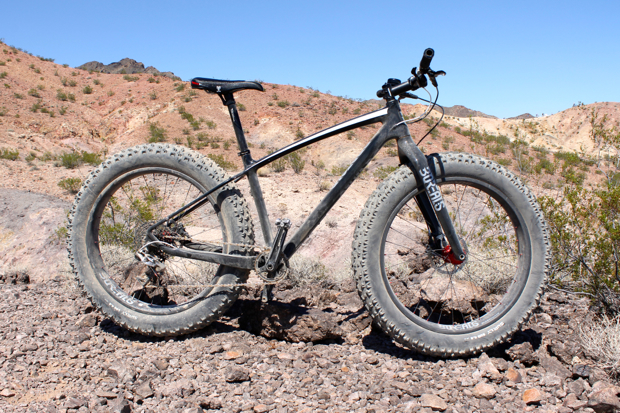 The Borealis Yampa has set the standard for lightweight carbon fat bikes, with complete bike weights in the low 20s despite 5″ tires and complete drivetrains. The version of the Yampa I tested featured carbon Borealis rims, a SRAM XX1 drivetrain, and other key after market upgrades. All of these great features are available at the every day low price of $5,549 with Turnagin FR80 rims, and probably a higher MSRP with the carbon hoops. 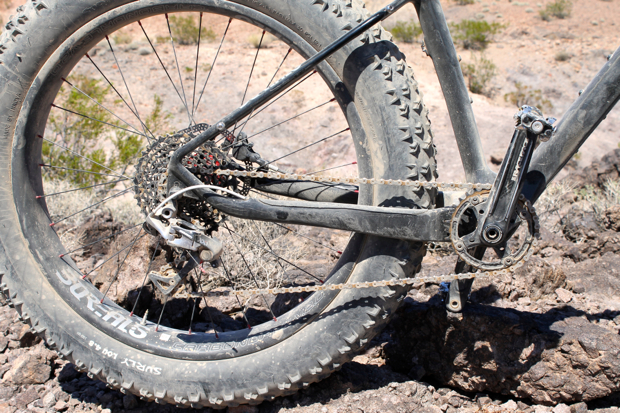 While I already own a fat bike that I love, I was blown away by the speed and agility of the Yampa! The snappy acceleration and excellent handling made me want to forsake my first love and give all of my affection to the Yampa.

The traction, speed, and agility were absolutely astounding, but not everything was butterflies and rainbows. In his review, Corey complained about his calves hitting on the rear seat stays while pedaling. While I personally had no issues with my calves touching the stays under normal pedaling, the minute the trail turned steeply downhill or I went to carve the bike into a turn, then my calves would bang harshly on the stays. Not only is this annoying and unnecessary, but in hard cornering I was unable to lean the bike properly due to this restricted range of motion. It doesn’t help things any that the bosses for a rear rack are in the exact spot that flairs out excessively far into my legs’ range of motion. 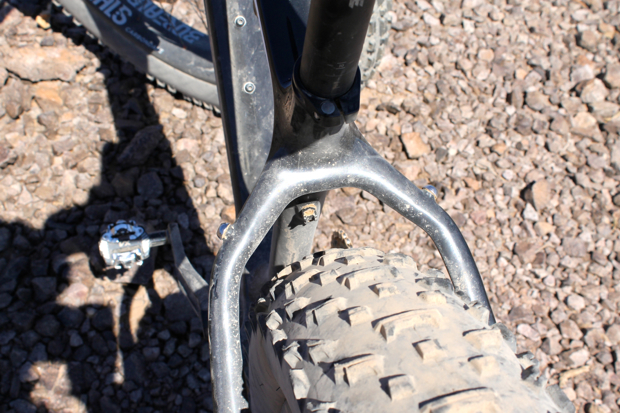 While I couldn’t help but have a grin on my face while I was shredding on the Yampa, with other great carbon fat bike offerings out there from Salsa, Fatback, 9:Zero:7, and probably others, I see no reason to compromise when you’re dropping almost $6,000. However, Borealis did just release a brand new bike: the Echo. While I was on the Yampa, Jim was on the Echo… and he can’t seem to stop raving about it! Be sure to check out Jim’s review of the Echo.

Man, some photographic genius must have taken that photo of you in midair. Probably the ghost of Ansel Adams was there.

Seriously though, the Yampa looked sweet. But I’m glad I took a spin on the Echo.