Canyon updated the Spectral trail bike for model year 2018, and the bikes just arrived in the USA earlier this year. I hopped on a Spectral 9.0 CF Pro for a few runs at Northstar Bike Park in California last week, and here are my impressions. 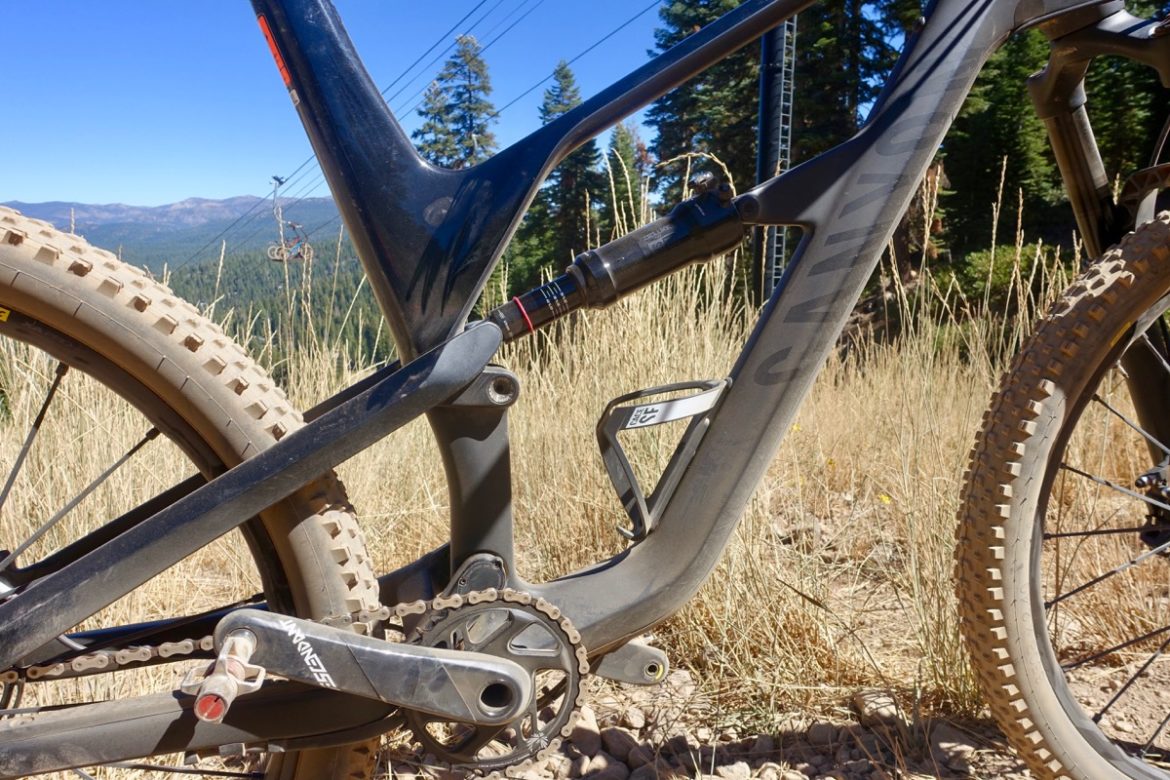 The Canyon Spectral CF 9.0 Pro features a carbon front triangle and an aluminum rear end. For 2018, Canyon swapped the shock orientation, going from vertical to horizontal, and moved the pivot from the chainstay to the seat stay, which allows for additional standover height and a shorter seatpost. 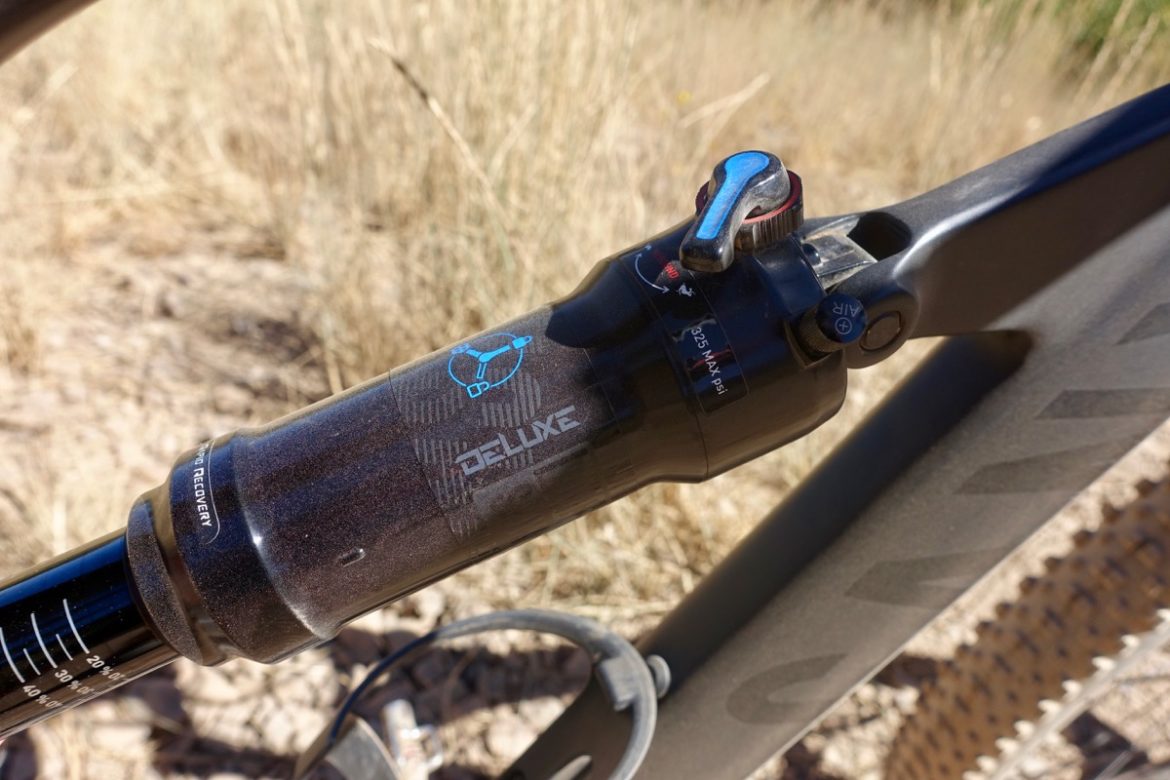 Based on the frame specs, the Spectral sits at the middle-to-more-aggressive end of the trail bike spectrum. The bike offers 140mm of rear suspension, and ships with a 150mm fork up front. 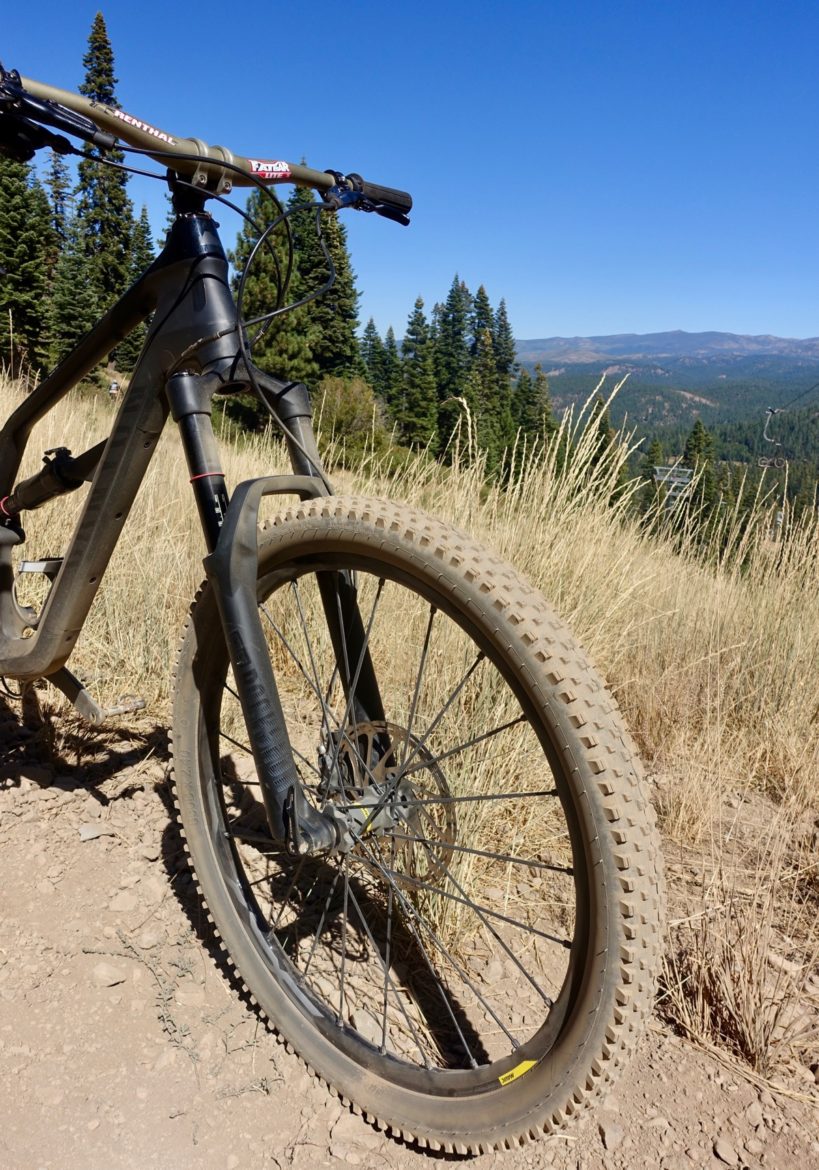 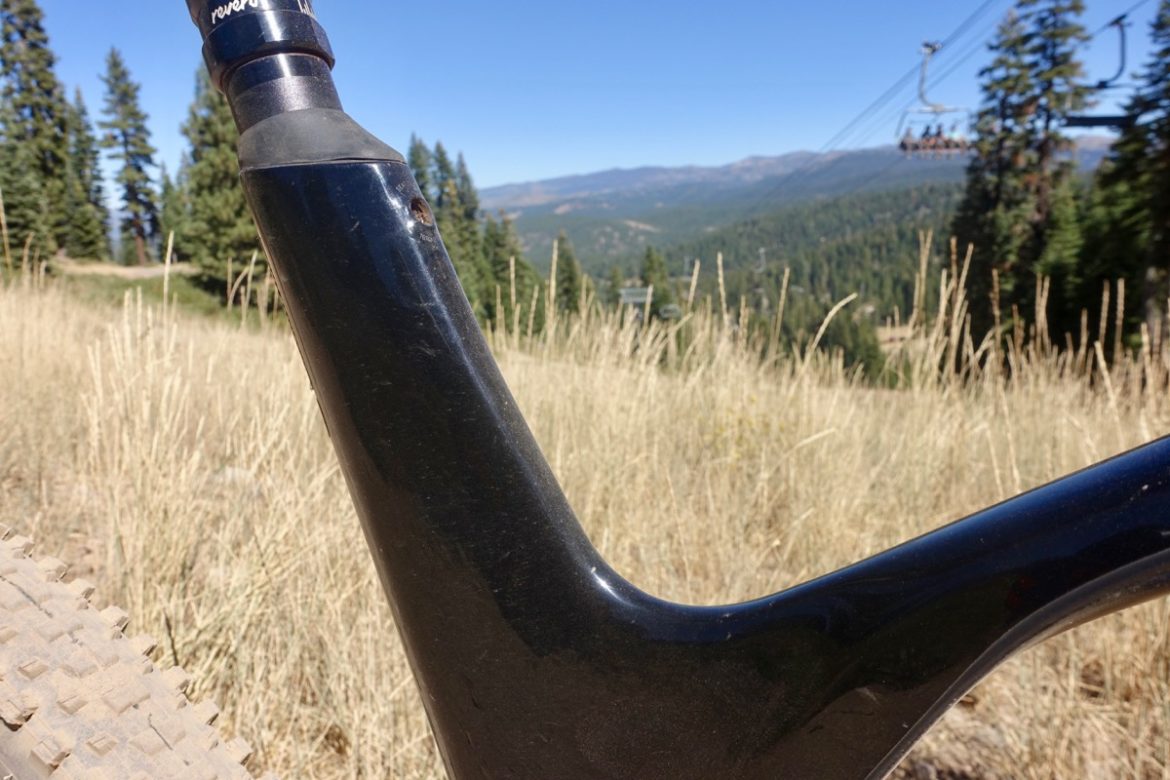 The seatpost is particularly noteworthy for the sleek-looking lines and integrated clamp. The 2018 Spectral design can accommodate 150mm travel dropper posts for size medium frames and up, and a 125mm-travel post for smaller frames.

Naturally, Canyon does a great job with internal cable routing on the Spectral CF. Looking at the bike in profile, cables are only visible at the handlebars and the rear axle.

A water bottle mount is included within the front triangle. 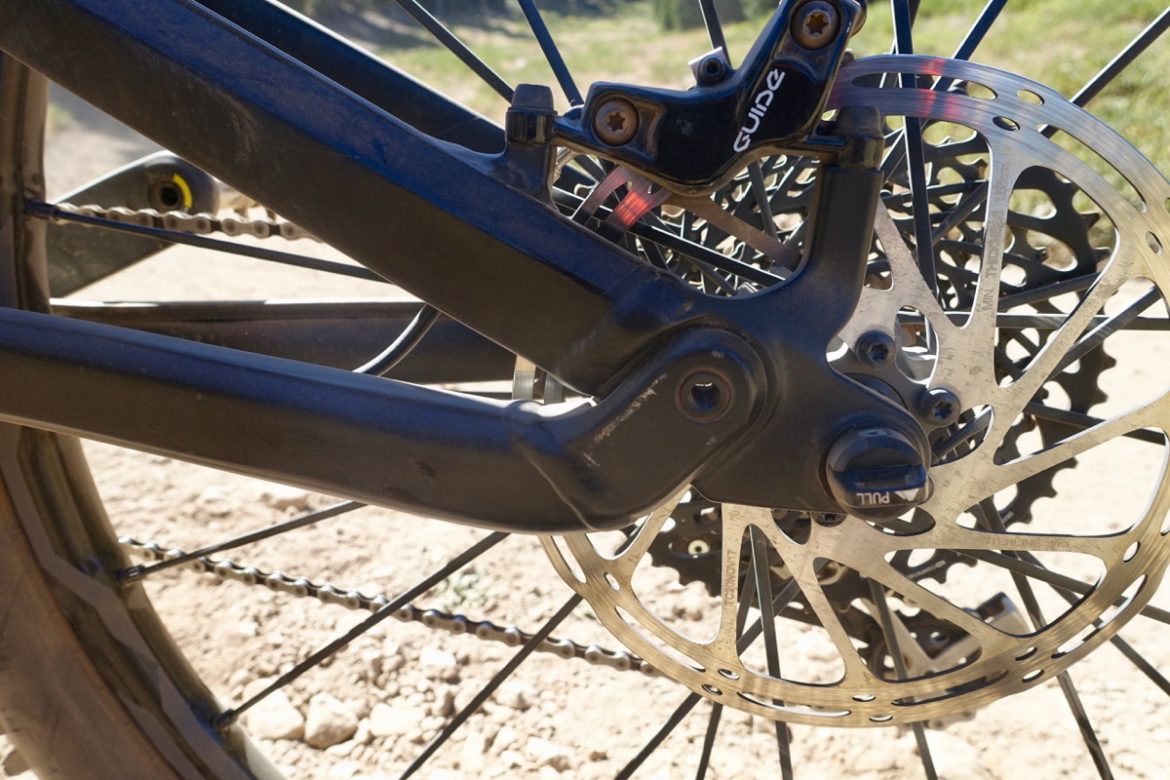 While the 9.0 Pro isn’t the top of the Spectral CF line — there are two more 9.0 versions above the Pro — this build does not disappoint.

Canyon specs a SRAM X01 Eagle drivetrain which is a nice surprise on a bike that’s third from the top of the line. Not only that, Canyon throws in a set of carbon Descendant cranks. The SRAM Guide RS brakes should provide more than enough stopping power for a trail bike with their 4-piston design and a big 200mm rotor up front.

A 150mm RockShox Pike RCT3 fork sits up front, with a Deluxe RT3 shock in back.

Rounding out the SRAM bits on the build, Canyon specs the Rockshox Reverb dropper post. The XL model I tested gets 150mm of post travel, though it still uses the awful push button remote everyone loves to hate.

If it isn’t clear already, the Spectral CF 9.0 is designed around 27.5-inch wheels, and the 9.0 Pro build features an alloy Mavic XA Pro wheelset. The wheels are fairly lightweight, and they’re basically the top of Mavic’s alloy trail line, but curiously the internal rim width is just 25mm. This clearly limits tire-width choices since most mid-wide (2.5 and 2.6-inch) tires are generally designed for rim widths 29mm and up. It doesn’t look like the frame offers a lot of clearance for tires wider than the 2.4s on the build I tested anyway.

Speaking of tires, the Spectrail 9.0 Pro is the only CF build that doesn’t come with Maxxis tires, opting instead for the Mavic Charge Pro 2.4 up front, and the Mavic Quest Pro 2.4 in the rear. 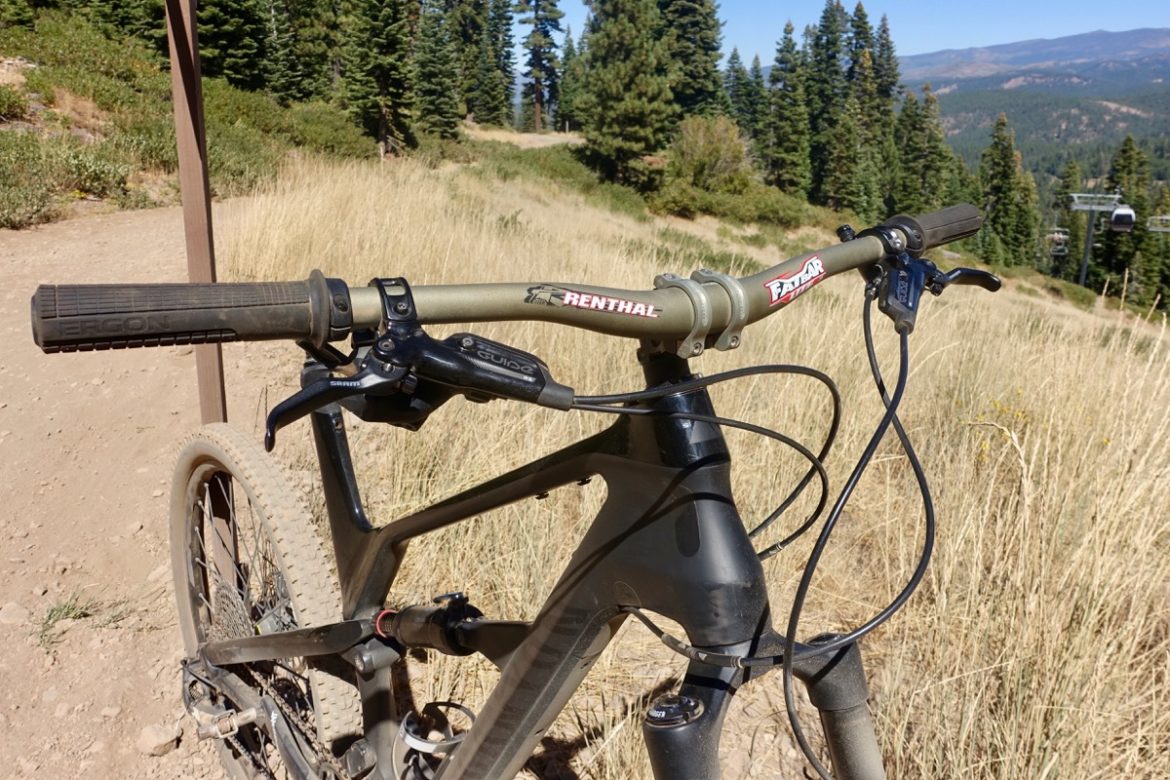 The cockpit is kitted out with an alloy, 760mm Renthal Fat Bar Lite handlebar with a 35m-diameter clamp, Ergon grips, and an Ergon saddle.

All told, Canyon claims a size medium Spectral CF 9.0 Pro weighs slightly less than 29lbs, without pedals. This weight is all the more impressive given the price of the bike: $4,499 MSRP, currently on sale in the USA for $4,199.

Charging downhill on the Spectral I was immediately struck with the linear feel of the suspension platform. 140mm of rear suspension travel isn’t a whole lot to work with, but it proved to be more than enough even on downhill runs at the bike park, where blown-out berms serve up deep, unexpected holes.

Looking for a slightly more plush feel and hoping for better small bump compliance, I let some air out of the shock after my first run. Despite setting the sag at nearly 30% before the ride, I wasn’t quite getting all of the travel out of the rear. Even at the lower pressure, the bike still felt extremely linear in its travel, which lends a racy persona to what should otherwise be a fairly comfortable all-rounder.

Matt and I rode some of the more natural-terrain, black-diamond trails at Northstar, and the Spectral handled the rocks and steeps with ease. I love being able to get so far back and low with the 150mm dropper post, and the 27.5-inch wheels made the bike feel much more nimble and precise than the 29er I tested the day before.

I’m not a big fan of the Mavic Charge tire on the front of the Spectral. The tire felt undergunned for the terrain at Northstar, especially when cornering in the loose. Fortunately, the Mavic Quest tire in the rear felt solid and did its job.

While I didn’t do much extended climbing on the Spectral, I can say based on my brief test this bike climbs great. It’s lightweight, and the suspension doesn’t feel mushy at all.

Unfortunately I had an issue with “ankle bang” on the drive-side seat stay when pedaling the Spectral CF 9.0 Pro. I’m 6’3″ tall with big feet, which means I typically fit at the extreme end of size charts. However, I have to say ankle bang is something I don’t think I’ve ever experienced on a mountain bike. (On the Fezzari Cascade Peak I did run into a heel rub problem, which could be related.)

It’s hard to say what the cause might be, but the seat stays do seem to stick out slightly beyond the curved chain stays below. Looking at the photos, I can see scratches on the stays from where someone’s heels (or maybe just mine?) are rubbing. Heel rub like I experienced on the Fezzari is annoying; ankle bang is just plain painful. After the fourth or fifth smack, I decided I was ready to call it a day.

If this were my bike, I would try adding a spacer or two at the bottom bracket on the drive side. The included SRAM GXP is threaded, which means the adjustment is something I could do at home. Of course this could throw the chain line out of whack, but it’s worth a try!

The Canyon Spectral CF 9.0 Pro is a solid trail bike with a high-end build kit, but at an affordable price. The geometry and suspension platform offer a safe choice for riders who want a modern all-rounder.