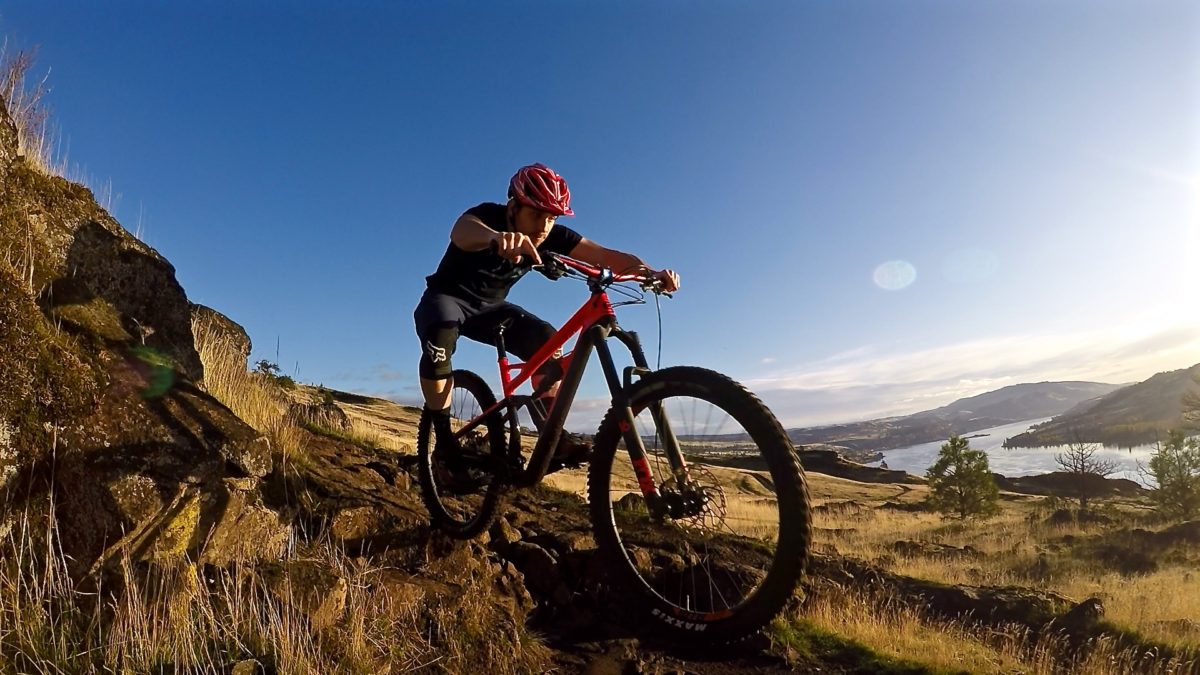 After three months aboard the Cannondale Trigger, I just had to spend some time on its bigger brother, the Jekyll. Like the Trigger, the 2017 Jekyll was the recipient of massive changes to its suspension design, along with a modernized tweak in geometry. At 165mm of rear travel, the Jekyll is Cannondale’s biggest bike, being billed by the company as “[enduro] stage-ready.” That said, the Jekyll’s scope of practice transcends the race track thanks to a thoughtful design with everyone in mind.

The Jekyll frame comes in four sizes (S-XL) and four builds, starting at $3,199 and climbing up to $7,749. All builds feature Fox suspension, a 1x drivetrain, dropper seatpost, the same massive carbon shock link, and 27.5″ wheels. The highest spec Jekyll 1 is the only build with a full carbon frame and wheels, while builds 2 and 3 pair Cannondale’s BallisTec Carbon front triangle with their SmartForm C1 Alloy rear swingarm. The Jekyll 4 is a full alloy frame. Unlike the all-mountain Trigger, which comes in a women’s-specific version, all four Jekyll models remain gender neutral. 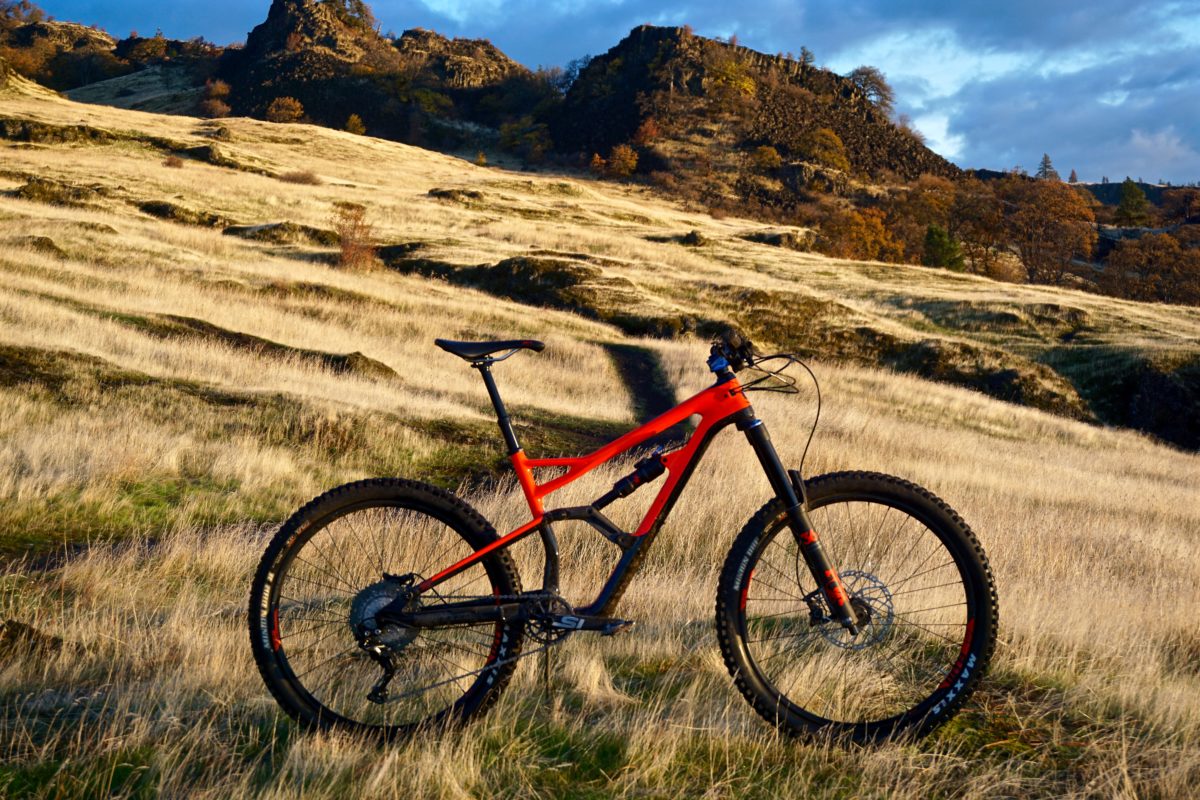 While I could tell you the Jekyll is long, low and slack — a phrase the mountain bike industry loves to toss around in reference to the frame’s reach, bottom bracket height, and head tube angle — Cannondale’s actual claim to geometry fame rests with one of the shortest chainstay measurements on the market: 420mm. I tested a size-medium Jekyll, so all references to geo and comparisons will be made to that size.

At 448mm, the Jekyll carries one of the longest reach measurements on the market. For reference, the Kona Process 153 — a pioneer of the long reach era — measures 450mm on a size medium. This, coupled with a 65° head angle, equates to a sprawling 773mm front center. Given the 420mm chainstays, this means 65% of the 1,193mm wheelbase is found between the bottom bracket and front wheel axle. That’s a front center proportion longer than the Kona Process 153, Yeti SB6, Santa Cruz Nomad, Transition Patrol, Specialized Enduro, and Canfield Balance — bikes well-known for current, aggressive geometry. 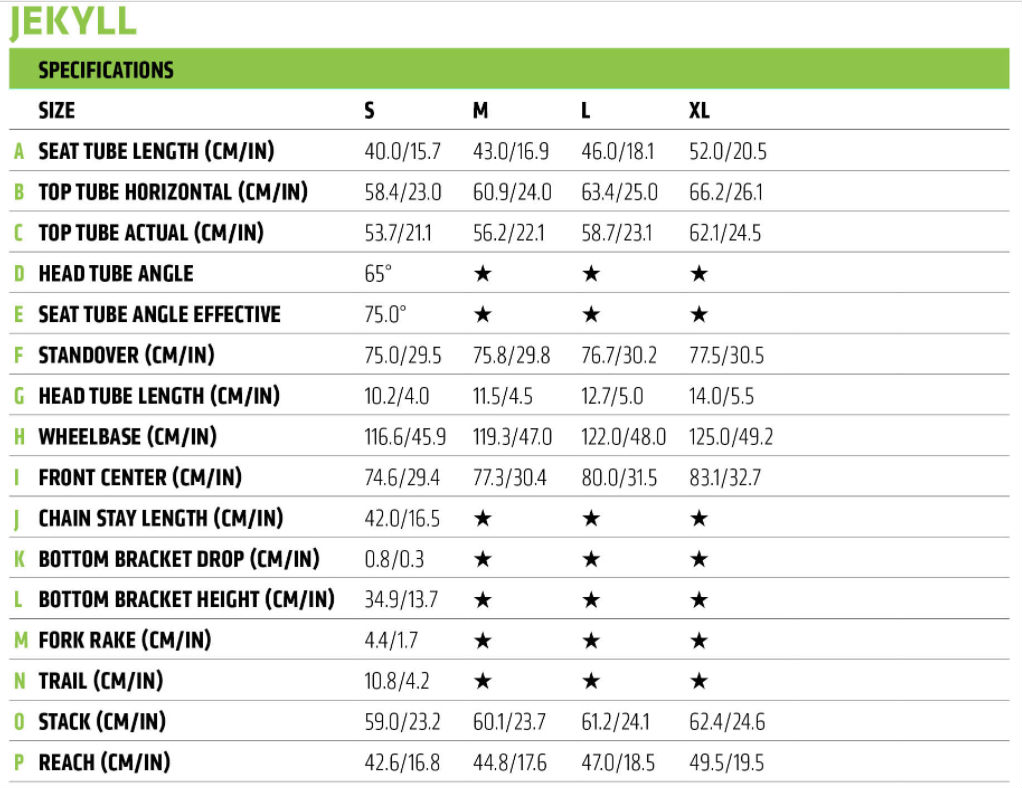 The overall geometry profile of the Cannonade Jekyll suggests a bike that’s more than capable of formidable downhill, confident and fun, and easy enough to wield through a wide variety of terrain. 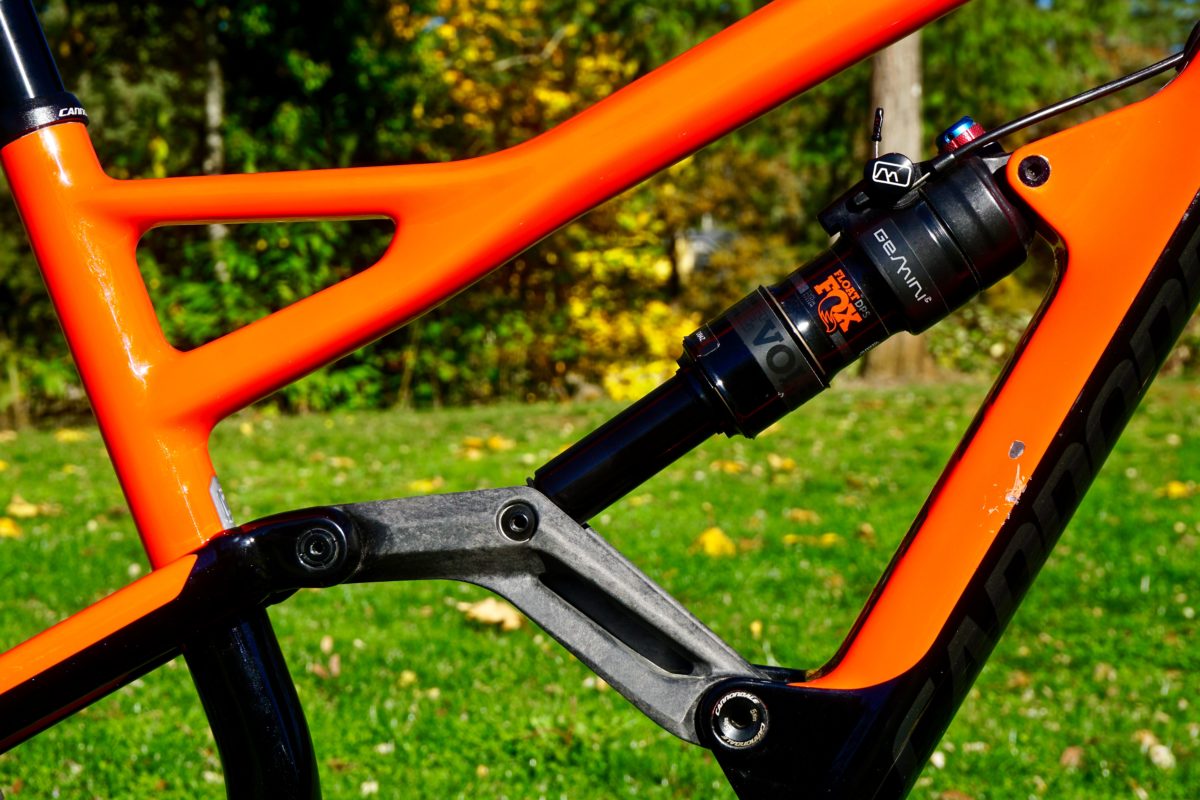 As a bike marketed for “any stage,” the Jekyll offers a variety of details for a variety of riding styles. Internal cable routing allows for a 1x, 2x, or Di2 drivetrain. Stealth dropper, brake, and remote cables (for the Gemini shock) also route internally through a unique port system. All Jekyll models feature the same massive carbon shock link and Cannondale’s “Lockr” thru axle pivots. The thru-bolt design enhances stiffness and ease of maintenance. A water bottle fits squarely between the bottom bracket and rocker link, and a carbon frame protector adorns the down tube.

What Is Ai Offset?

No, not artificial intelligence, and no, the Jekyll ain’t no ebike (yet). “Ai” stands for “Asymmetric Integration,” which is a proprietary design Cannondale employs in an effort to provide Boost spacing and super short chainstays without the compromises that are often associated with Boost spacing. Moving the chainring, front derailleur, and chainstay a full 6mm (from 142 to 148mm) towards the drive side allows for massive tire clearance without thinning the driveside stay or eliminating 2x compatibility. To achieve proper chain line, the rear cogs also move 6mm outboard to the drive side, and the rim now sits directly between the hub flanges. This results in even spoke angles and tension on each side of the rear wheel for a stiffer, stronger hoop. Unfortunately, this also means a rear wheel replacement will require re-dishing the wheel. 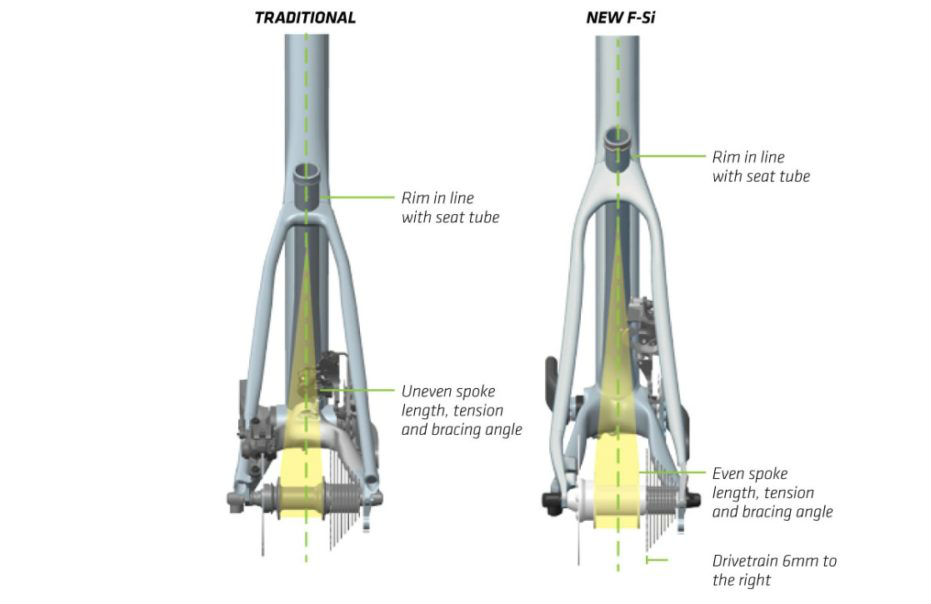 The most notable change Cannondale made to the Jekyll is the suspension. While the DYAD pull shock has been laid to rest, some of its likable features have been condensed into a less burly, less technically-complicated shock design Cannondale calls “Gemini.” The Gemini technology reduces shock volume by 20%, thus ramping up (or down) the spring rate. The tech is integrated into a Fox Float Performance DPS EVOL rear shock on the Jekyll 3, or the Float X on the Jekyll 2 and Jekyll 1. At the flick of a handlebar-mounted switch, the travel changes from 130mm (“Hustle”) to 165mm (“Flow”). The Gemini/Fox mashup still features a 3-position compression lever and rebound adjustment, which remain unaffected regardless of whether you’re hustling or flowing. 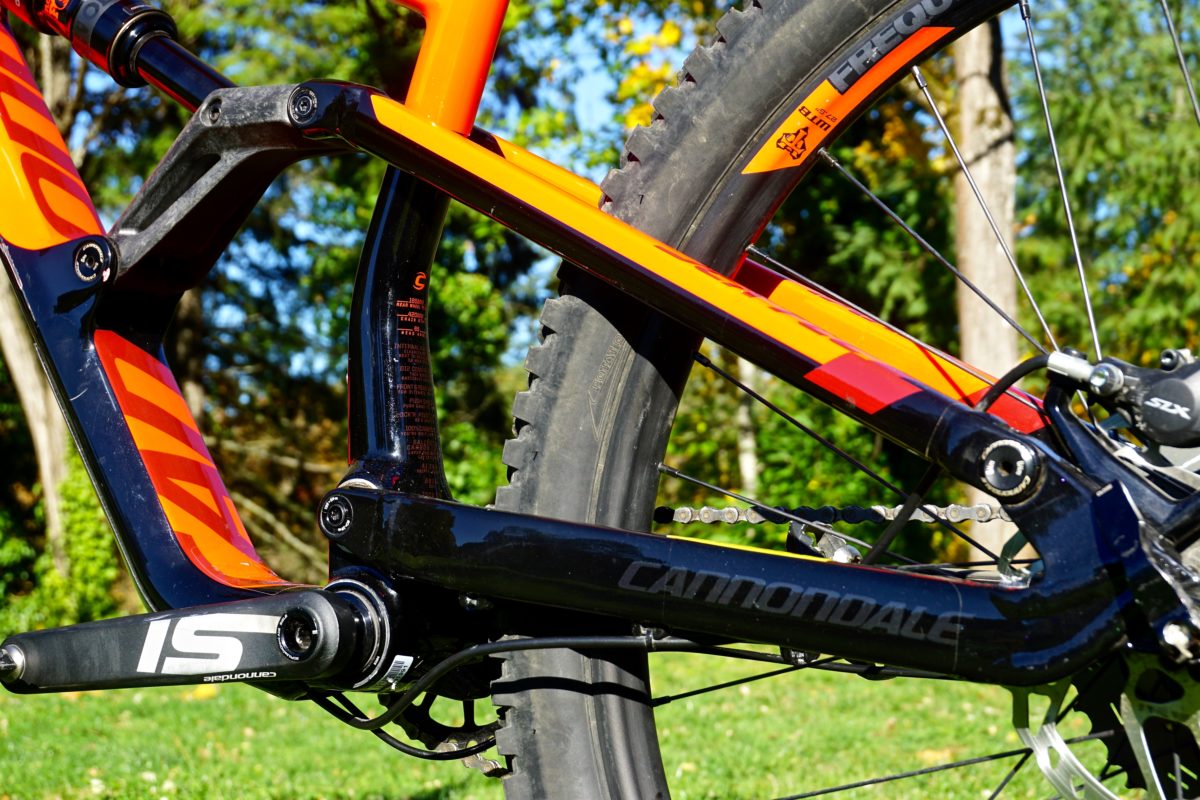 The rest of the component package for the Jekyll 3 is mostly on par for a mid-level build, which is to say: a few let downs, very little bling, and durability and reliability in mind. A fork as robust as the Fox 36 is a no-brainer on a bike of this stature, and I’ve been very impressed with three other Performance models I’ve tested this year (Pivot Firebird, Cannondale Trigger, Scott Spark Plus). A solid set of WTB Team i29 wheels with Formula hubs are paired with the meaty likes of Maxxis Minion DHF 2.5″ (front) and DHR II 2.4″ (rear) tires. 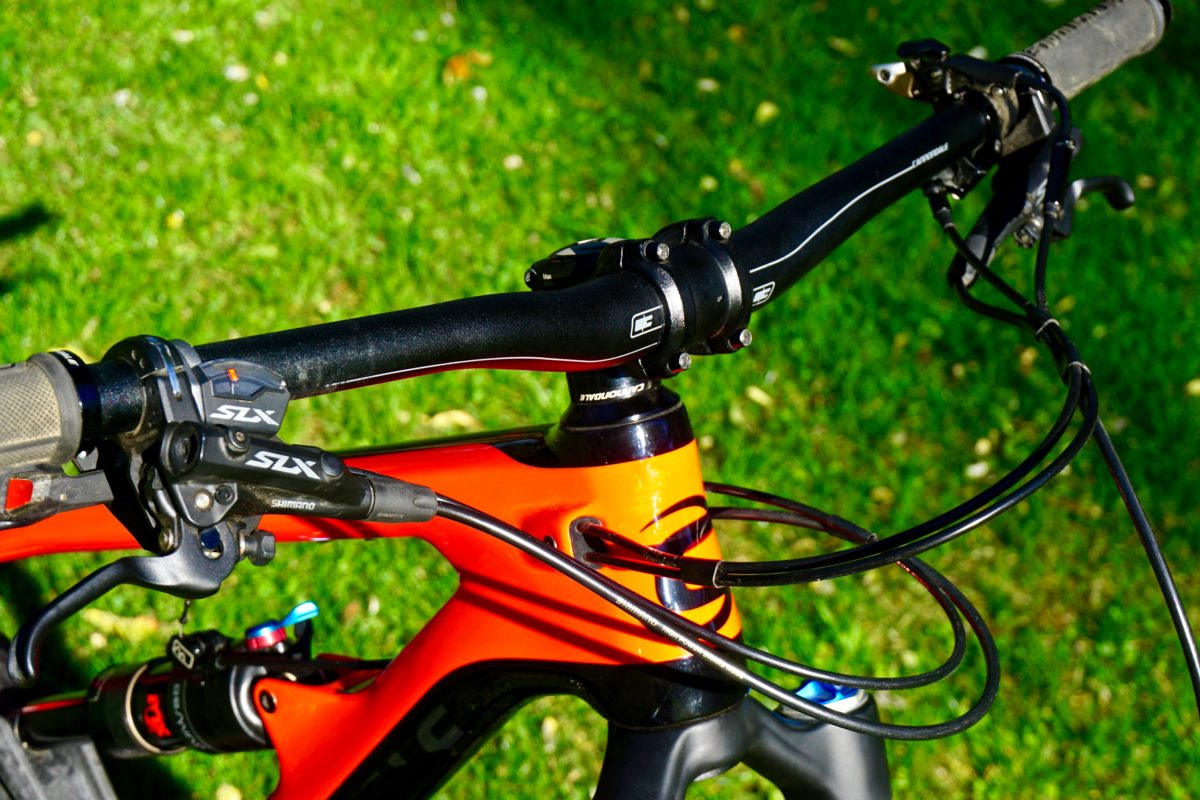 The biggest let downs on the Jekyll 3 component list are the cockpit and crank. Again, there are pros and cons at this price point. The cranks, stem, and handlebars are Cannondale house brand. I’m not terribly picky about cranks, but why anyone would spec a 175mm crank length on a bike with a bottom bracket lower than 350mm is beyond me. I’m a fan of TransX droppers — I have one on my hardtail — and this one on the Jekyll is great, too, but 120mm of drop just doesn’t cut it for a bike worthy of more. The combined geometry of 780mm wide bars paired with the 35mm long stem works well with the Jekyll’s long reach. These two cockpit components offer little by way of aesthetics but keep the price point of this mid-level build reasonable. 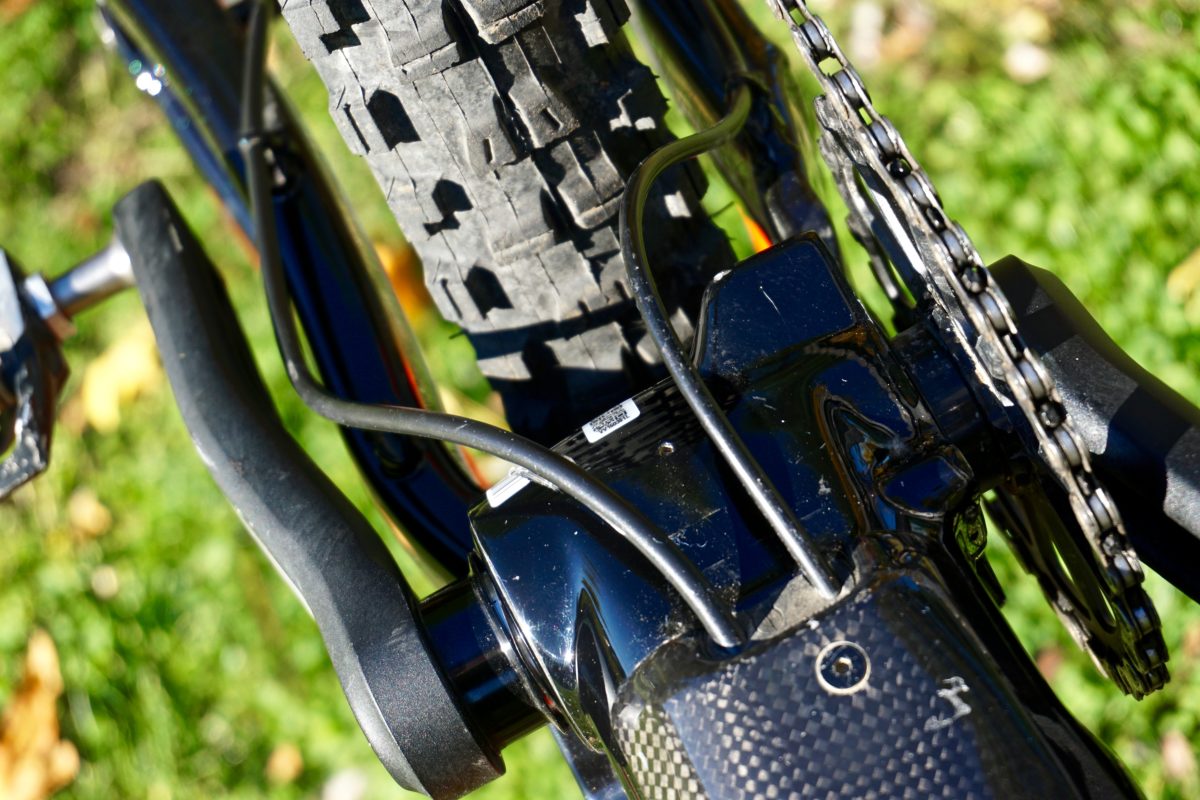 The drivetrain and brake choices, on the other hand, were spot-on! A mix of Shimano XT and SLX fill out the drivetrain, and the SLX brakes had such power and reliability, if I were blinded to the logo, I’d have thought they were at least XT. Since reviewing the Cannondale Trigger, I’ve come to respect the Fabric saddle — also featured on the Jekyll — as a great all-arounder. 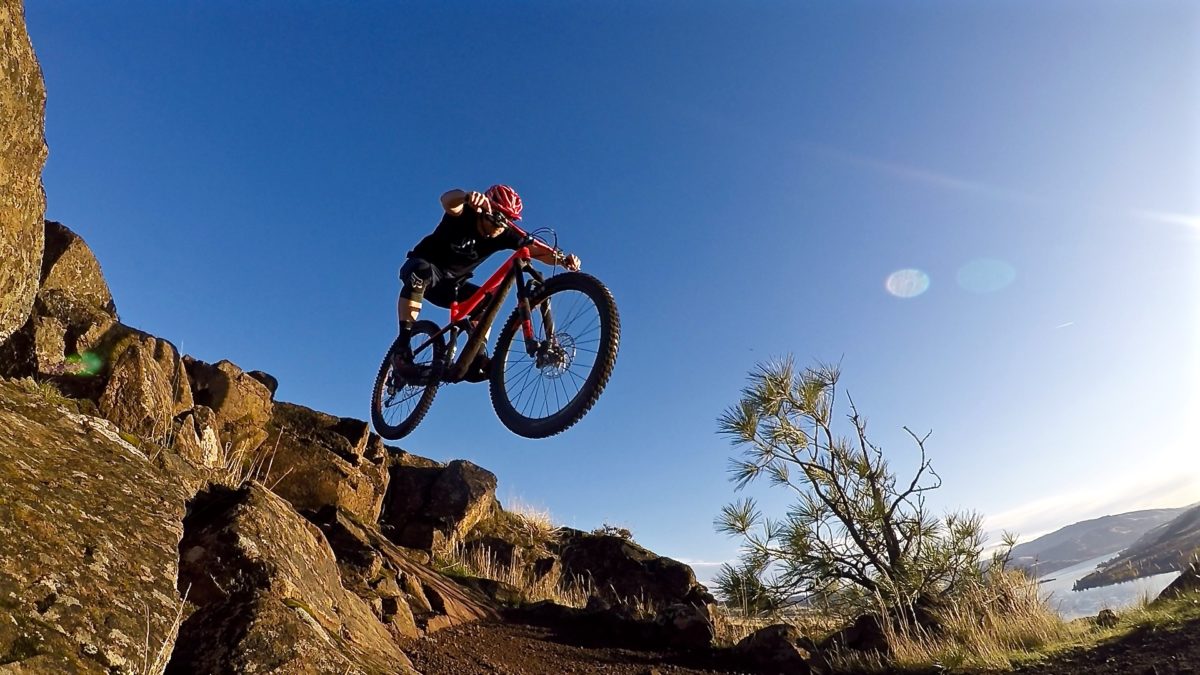 Somewhere between the arrival of a Cannondale box containing the partially-assembled Jekyll and a long, rocky jeep trail climb one week into my review period, I had completely lost sight of how much travel this monster has. I got suspicious about the travel amount not out of concern for how difficult the climb was, but rather due to how well the Jekyll performed on the long slog to the top. A bike this big shouldn’t climb so well, feel so supportive, be this nimble, and… all those other superlative expressions you read in bike reviews. Yet, the Jekyll is big and it did and was all those things. 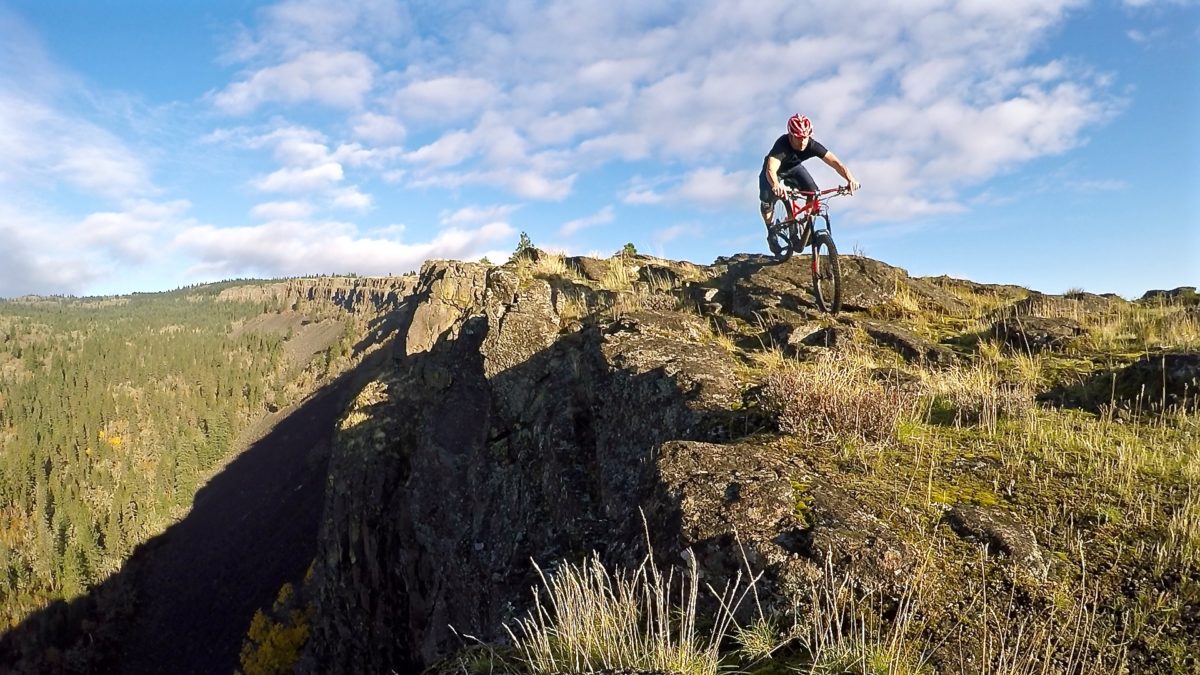 Let’s start with the do-hicky on the shock. To be clear, this is not a handlebar mounted compression damper remote for toggling between climb, pedal, and descend. The Gemini shock has a damper lever on the shock body, and you can reach down to flip like any other Fox shock. The Gemini has two modes (unrelated to damper control) called Hustle and Flow — the difference being 20% more or less volume and a more or less progressive spring rate. In Flow mode, the shock is wide open, unmasking the Jekyll’s full 165mm of travel capability. By pressing the switch mounted on the handlebar, the usable air volume in the shock is reduced, making the Jekyll feel like a shorter travel (~130mm) bike. This volume reduction, or Hustle mode, provides a more supportive, progressive spring rate for situations like out of the saddle sprinting. 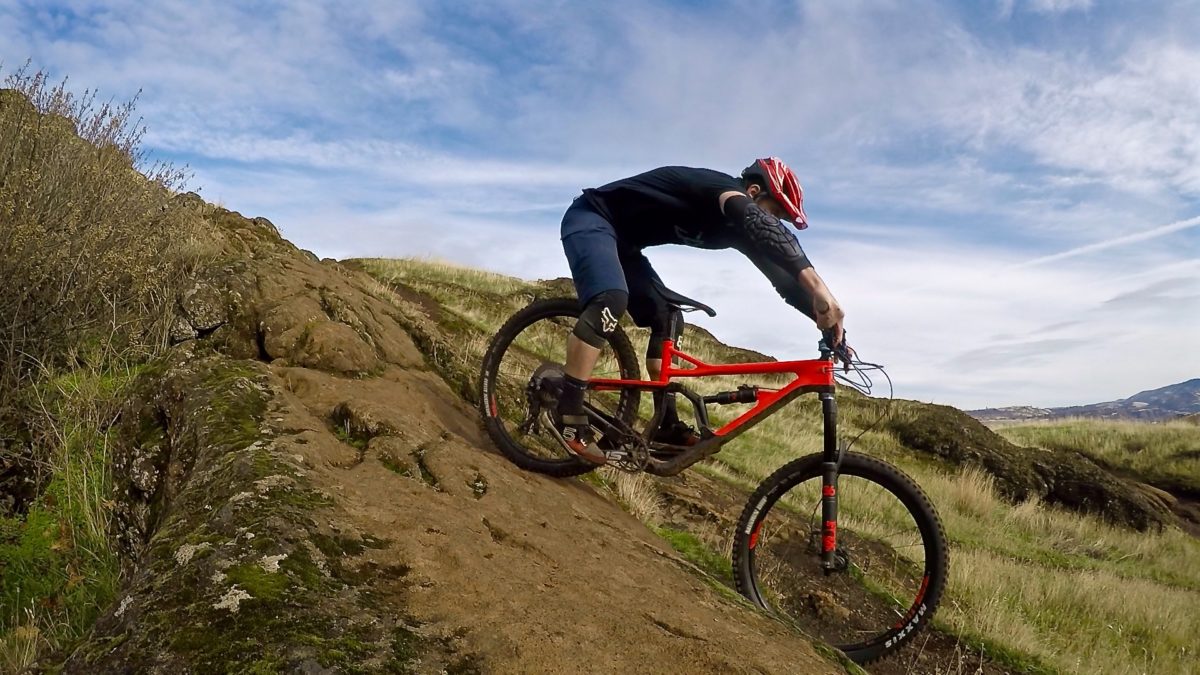 I detailed a previous experience with the Gemini shock in my review of the Cannondale Trigger — basically, a smaller version of the Jekyll — and thoroughly enjoyed being able to drastically alter the bike’s dynamics at the flip of a switch. Riding the Jekyll was no different, except this time I got to play with a bigger bike which did not shy from any task I demanded.

Flow mode (165mm) is full-on braap mode: get ready for thunder-chunder, gnar, drops, rock and root gardens, and all other manner of severely-technical and demanding downhill terrain. Flow sets the Jekyll deeper into its travel, minimally slackening out the bike’s geometry, and soaks up the trail with the greatest of ease. But how many trails can you honestly say are made up of such intimidating surface from top to bottom without letting up, just a little? This is where Hustle comes in handy. 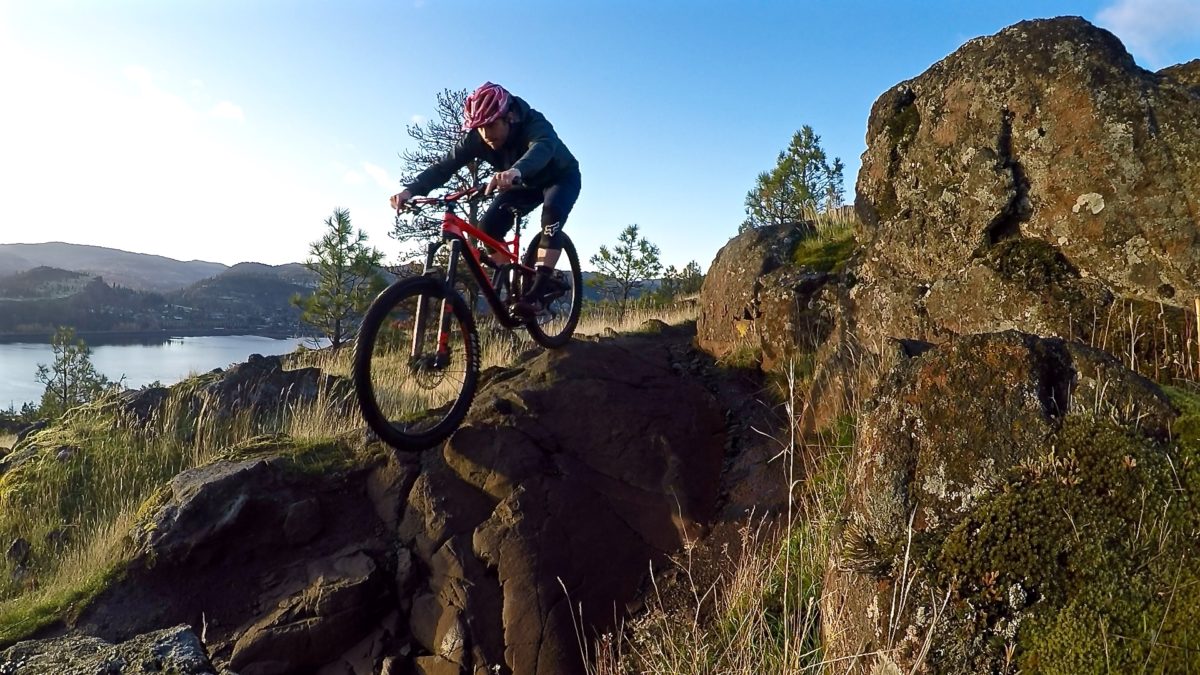 Most trails are punctuated with sections so demanding you might actually need 165mm of unfettered travel, while the rest is smoother, undulates or flattens, and requires out-of-the-seat pedaling. 130mm of travel with a snappier spring rate is much more at home on the latter. Hustle mode transforms the Jekyll into a more responsive, more playful, and stiffer bike. Hustle steepens the bike’s geometry and reduces pedal-induced bob until it’s time for the next “Flow-appropriate” section.

Although not specifically designed for such, improving the Jekyll’s climb-ability might be considered an off-label use for the travel-adjusting shock. The Gemini/Fox damper performs independently of its volume-reducing feature — the former manages oil flow while the latter alters air volume. This means, between the three-position damper and the two modes of travel, there are up to six on-the-fly settings available to fine tune the feel of the suspension. Much like a long descent, a sustained climb typically involves a mix of terrain and grade requiring both seated and standing pedaling. On gravel road climbs I had the time to dial in both damper and volume adjustments for a near-perfect pedaling platform. During singletrack climbing, however, I found Hustle mode (with the damper open) adequate for quick transitions to steep, technical climbs or switchbacks. 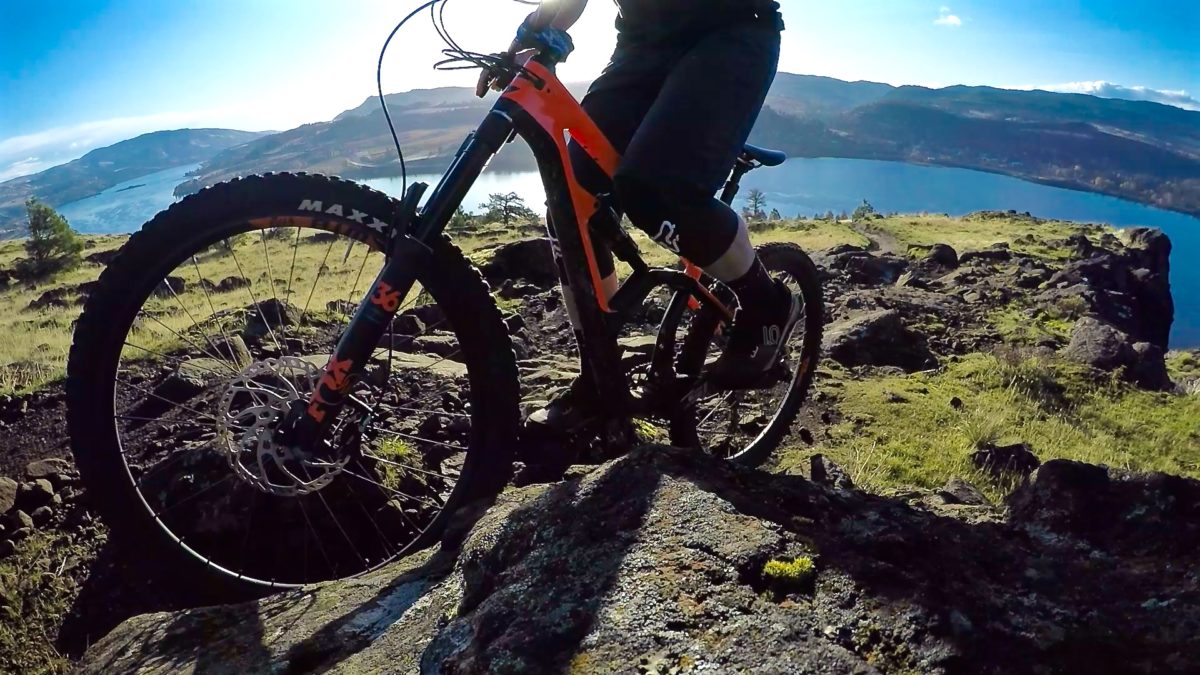 As previously mentioned, 65% of the Jekyll’s wheelbase is in the front center (bottom bracket to front wheel axle). While this is proportionally quite large, the actual front center measurement isn’t as long as the chainstay length is short (420mm). Critics argue that a shorter chainstay, while being more nimble or “flickable,” contributes to instability on high-speed terrain. The Jekyll’s long front end, 65° head tube, and roomy reach allow the rider to sink into the bike, mitigating any insecurity arising from the short chainstay when at speed. What’s more, the super short stays require very little rider input when lofting the front end up, whipping a corner, or jibbing obstacles. 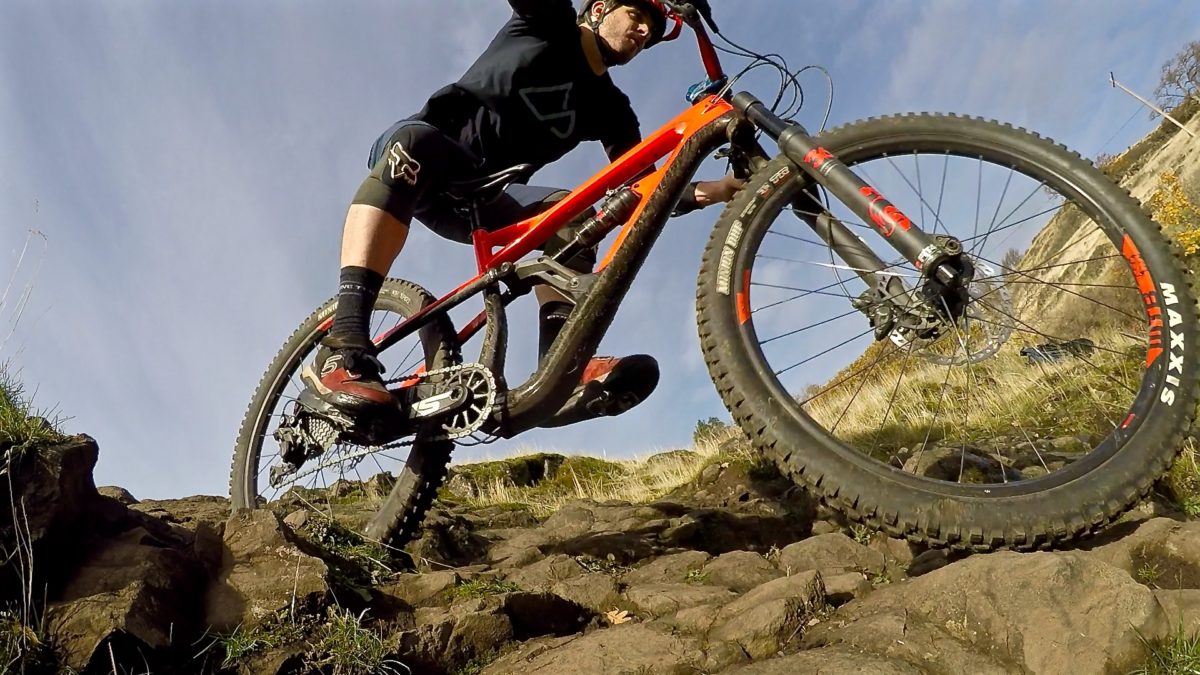 Given such thoughtful attention to frame features and a decent, albeit checkered, component selection, Cannondale has produced a stage-ready rig in the Jekyll 3 without having painted themselves into an enduro-only corner of the market. In other words, the Jekyll is as capable as any race bike without eliminating the possibility that some folks will prefer a 2x drivetrain, a different shock, and a frame-mounted water bottle (that’s actually accessible).

Thanks to Cannondale for lending us the Jekyll 3 for review.