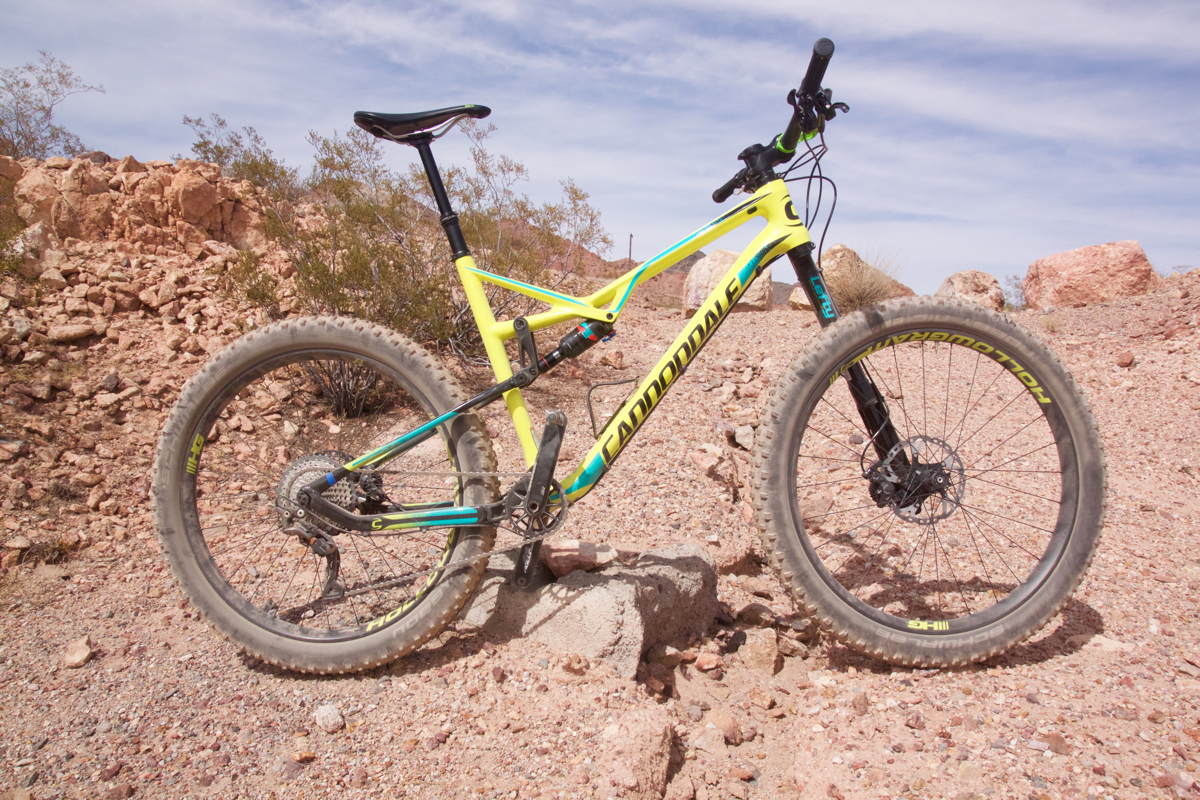 Cannondale showed the Bad Habit at Interbike back in 2015, and this year the bike is offered in both aluminum and carbon frames. I got a chance to test the top-shelf, Bad Habit Carbon 1 at Outdoor Demo last week, and here’s what I learned from my brief test ride.

The Cannondale Bad Habit is a full suspension 27.5+ mountain bike with 120mm of travel front and rear. The Carbon frame is designed with a 68-degree head tube angle, which is a safe choice for a 120mm trail bike. Cannondale positions the Bad Habit as a capable trail bike designed to both climb and descend quickly, but with the added bonus of taking the sting out of technical trails thanks to the plus-size wheels. 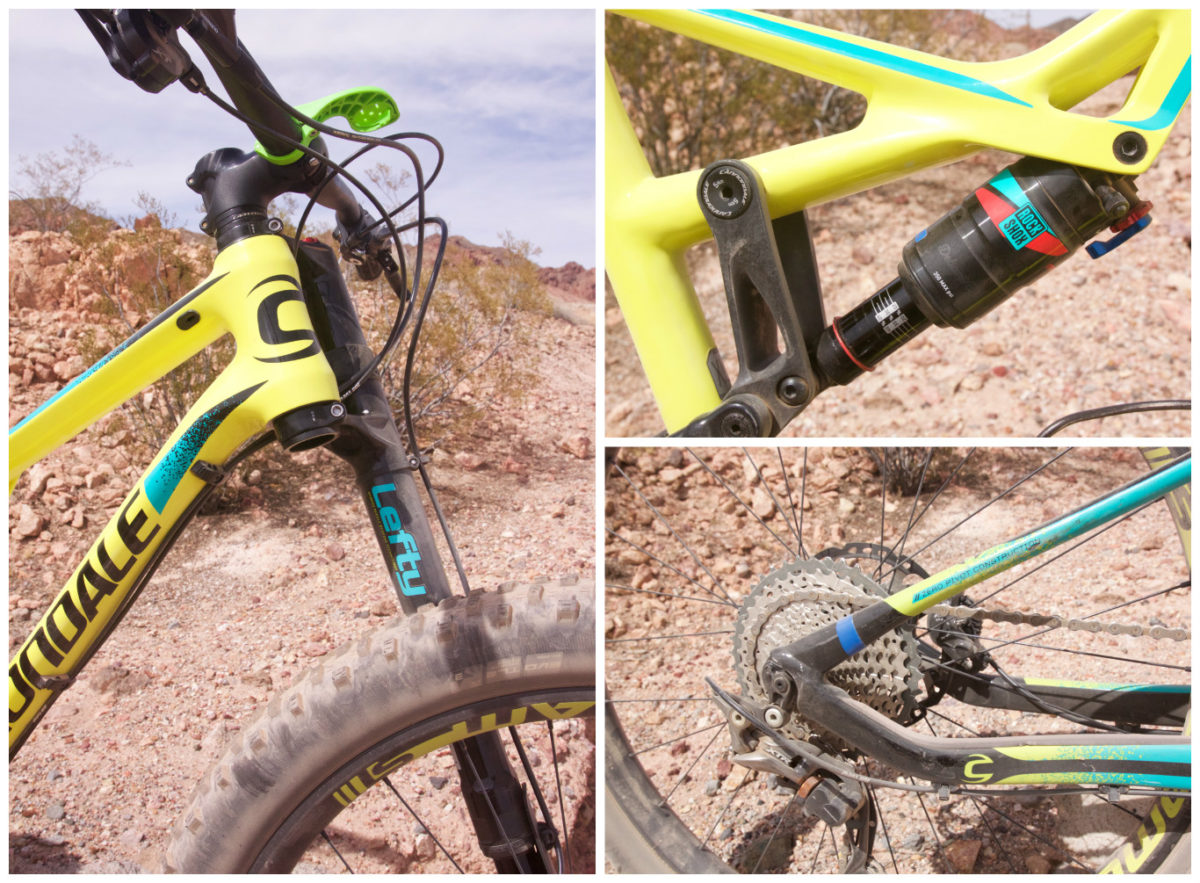 One of the first things riders will notice is that the Bad Habit utilizes Cannondale’s Lefty 2.0 fork (strut) up front. This was actually my first time riding a Lefty and maybe it’s cliché to say this, but it feels like a regular mountain bike fork. I probably thought about the fork for like the first two pedal strokes, then I totally forgot about it. On the trail, the Lefty felt even more stiff and precise than other forks I’ve tested.

In the back of the bike, a Fox Float DPS shock smooths out the bumps. Officially the Bad Habit Carbon 1 specs a Fox Transfer dropper post, but the bike I tested was running a KS Lev seatpost. The Schwalbe Nobby Nic 3.0 tires performed really well in the loose-over-hard conditions at Bootleg Canyon, offering perhaps the best handling I’ve experienced on a plus tire to date. The Shimano 11-speed drivetrain works well on this bike and the 11-42t range should be enough for most riders. Fortunately Cannondale includes a 30t chainring up front to help riders overcome the added resistance of the wide plus-tires. 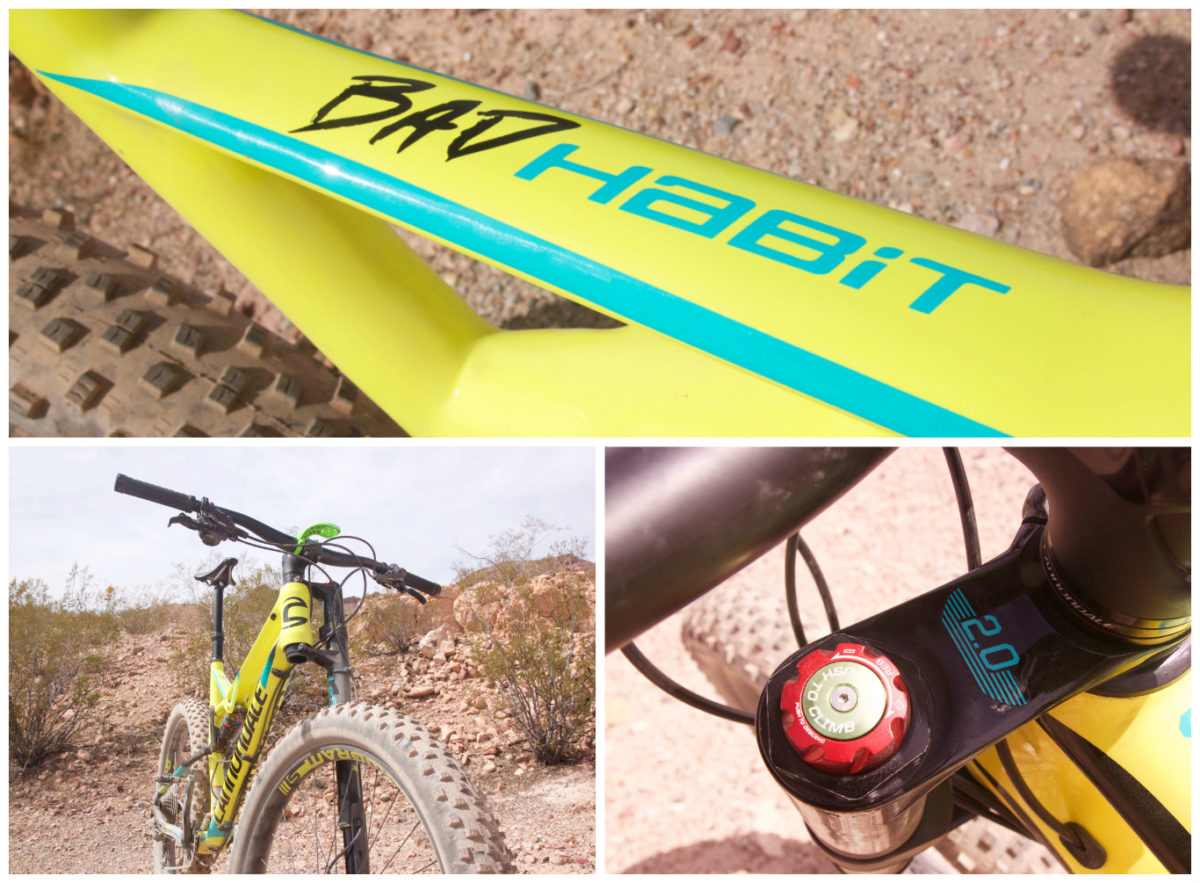 During my short ride on the Bad Habit I found that the bike climbed efficiently and the suspension kept the tires glued to the ground. As you might imagine, the Bad Habit Carbon 1 is lightweight, especially for a plus bike. This made it even easier to rocket up hills.

Coming back down the mountain, I was pretty surprised at how stiff the Bad Habit felt. To be fair, it probably would have been possible to tune some of the stiffness out by adjusting the fork and shock. On the plus side, that stiffness–both vertical and lateral–gave the bike scalpel-like precision in terms of handling, so much so that I found myself comparing the ride feel to the Specialized Camber I tested last year.  I expected a slightly more loose feel, especially since this was my first time on a Lefty fork, but the Bad Habit descended like a race bike… just with plus tires.

I personally think the Bad Habit is a great-looking bike with its 80s-inspired colors and graphics. The Lefty fork is a polarizing choice in terms of aesthetics, but either way, this bike will turn heads.

The Cannondale Bad Habit is a great 27.5+ bike for riders who enjoy the more aggressive end of the cross-country riding spectrum and are looking for a way to get even gnarlier. This is one Bad Habit that, once you pick it up, you’ll find it difficult to drop.

Gear
Test Ride Review: Turner Sultan 27.5+
Gear
28 Fat and Plus-Sized Bikes Rated: Quantifying the Calf-Bang Factor
Gear
The New Nukeproof MegaWatt E-bike Promises a Planted and Playful...
Gear
The We Are One Arrival Is a Mid-Travel Bike With...

Progression
Sizing Up or Down Plus Handlebar Widths and Crankarm Lengths:...
Gear
Never Underestimate the Power of a Good Zip-tie
Gear
The Maxxis Minion DHF Tire is Still the One to...
Gear
These MTB Deals are Fire, including 40% off Patagonia Dirt...
Subscribe
Login
Please login to comment
1 Comment
Most Voted
Newest Oldest
Inline Feedbacks
View all comments

This is a great-looking bike! I definitely wouldn’t mind taking this for a spin.