Most of the major mountain bike trends over the last four-plus years have involved an increase in tire widths. With 4-inch fat bikes giving way to 5-inch rigs, and 27.5-inch and 29-inch tires going wider to 2.8- and 3.0-inch, the mantra “bigger is better” seems to be widely-accepted.

But based on the extensive fat and plus-sized bike testing I’ve done over the years as these trends have developed, I believe that we are quickly reaching the limits of what features we can pack into the rear end of a mountain bike without experiencing negative effects on the human anatomy. And in some cases, those limits have already been reached.

Myself and other Singletracks writers (most notably maddslacker) have written about this uncomfortable phenomenon. I’ve come to realize that this phenomenon is cropping up in more and more bikes, so I decided to sit down and attempt to name and quantify it. In short,

Calf-bang is when a rider’s calves hit, or “bang into,” the seatstays of the mountain bike that he/she is riding. 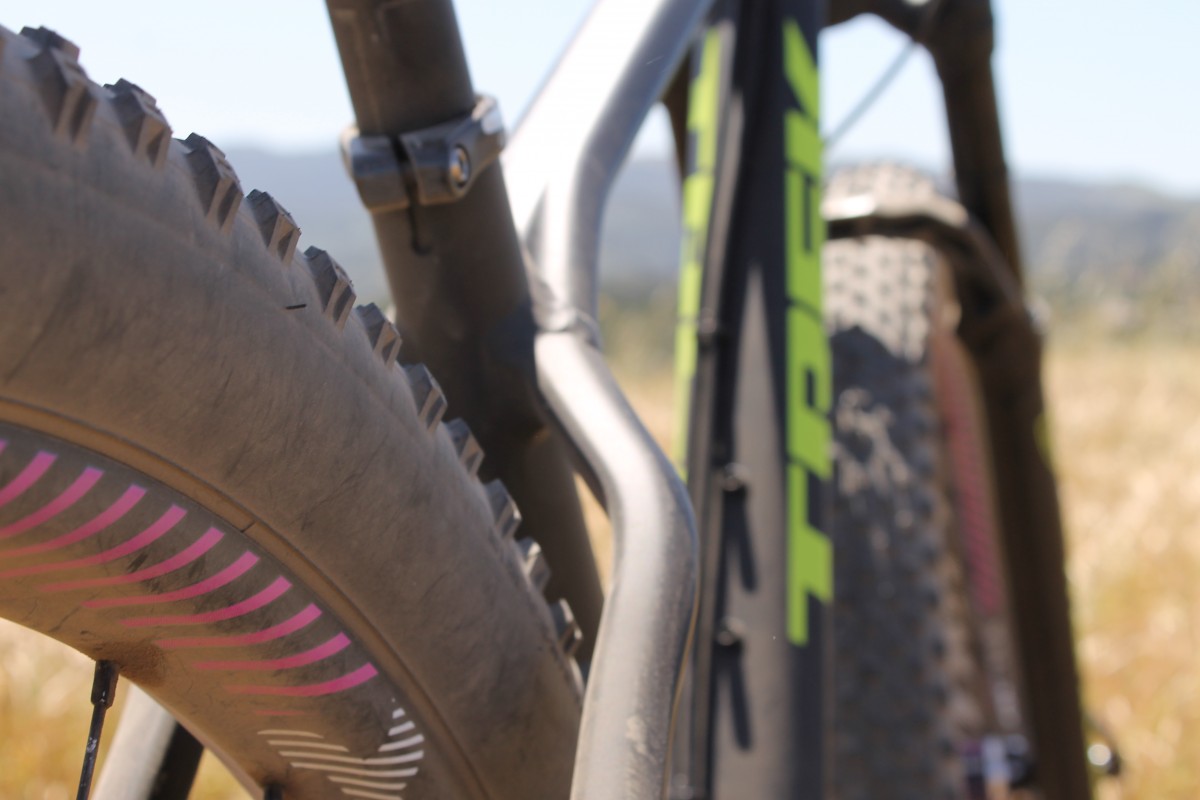 To date, the riders I’ve heard reporting serious calf-bang issues have been short and stocky. I fall squarely into this category, with a height of 5′ 7″ and a muscular build of 180 pounds. I must admit: I’ve always had broad, muscular calves–I theorize that part of my build may be due to spending so much time as a teen doing endless hill repeats with my mountain board and downhill skis, for hours and days on end. My guess is that many mountain bikers have similar physical builds.

There are at least four key design factors at play that contribute to the issue of calf-bang. They are:

Ultimately, the four desired features called out above are all working against the riders with the anatomy mentioned above. A narrower Q-factor brings the legs closer in to the bike. Shorter chainstays bring the stays closer to the rider’s legs. Wider tires, extra tire clearance, and flared stays all push the the chainstays further out, thus increasing the opportunity for those stays to impact the rider’s legs.

Now, all four of those factors and desired design features are all great things. The problem is that we are reaching the limits of what can be incorporated into a mountain bike, especially for smaller riders. Hence, the existence of calf-bang.

Below I’ve ranked the calf-bang factor of all the fat and plus-sized bikes that I’ve ridden to date. In the list below, the higher the number is (on a 10-point scale), the more frequently my calves banged on the chainstays of the bike. The list is organized from worst (highest number) to best (lowest number). If a number of bikes are tied at the same ranking, those bikes are organized in alphabetical order:

Out of 26 bikes that I’ve ridden, 13 had no calf-bang factor whatsoever. Of the other remaining number, 9 were very low on the scale. As a result of these ratings, whenever I talk to a brand and they say, “oh, that’s not a big issue,” or, “oh, all fat bikes do that,” I call BS. The problem is, some of the worst bikes I’ve ridden for calf-bang have also been from the biggest-name companies, which I think will lead consumers to believe that they have no choice but to deal with discomfort and pain when riding a fat or plus-sized bike.

It’s also interesting to note that the worst bike I’ve ever ridden for calf-bang, the Borealis Yampa, has since been discontinued, according to my conversation with Borealis at Interbike just last week. I’d love to swing a leg over the latest Borealis bikes to see if the calf-bang factor has been improved, and I hope to do so in the next couple of weeks.

At the end of the day, everyone’s body is different, and the design of every mountain bike is slightly different as well. While I wish I could tell you that all you need to do to decide which fat or plus-sized bike you should buy is to read reviews on Singletracks.com, the reality is that you still need to get out and ride the bike yourself. And a quick pedal around a paved parking lot probably won’t cut it, either: I recommend riding with your normal kit, your normal shoes and pedals, and riding in real conditions: on a mountain bike trail and/or in the snow.

Only you can decide what is and is not acceptable in a mountain bike, so don’t buy into a line of marketing hogwash telling you that a bike will be perfect if, in fact, it isn’t.

Also, please don’t believe the lie that there’s one magic bike out there that can do everything perfectly. No matter what feature we’re talking about, there’s always a compromise of some sort to be made. You just have to decide where you want your bike to compromise: will it be the q-factor, the chainstay length, the tire width, tire clearance, or your comfort while riding? If you ask me, compromising anything else is preferable to compromising your comfort on the bike.

Community
Klunking for Kyle: Commemorating a Life with Mountain Biking's Original...
Progression
Feeling a Little Sluggish on the Trail This Spring
Trails
Reverberations from the Bike Boom Continue to Rock Trail Traffic
Gear
Why Kids Bikes May Need to Take a Hint From...
Subscribe
Login
Please login to comment
6 Comments
Most Voted
Newest Oldest
Inline Feedbacks
View all comments

I can only dream of having such a problem. LOL.

I’ve added 7 new calf-bang ratings to this list from my testing at Outerbike 2015. They are:

I suppose that we are fortunate that there are so many bike manufacturers out there. There IS a bike for everyone. Ragging on fat & plus geometries seems a bit over the top. BTW: ALL bike manufacturers tout their respective bikes as the best – not just fat and plus companies.

Hoping you could try out a Trek Farley (alu and carbon) and the RM Suzi Q.