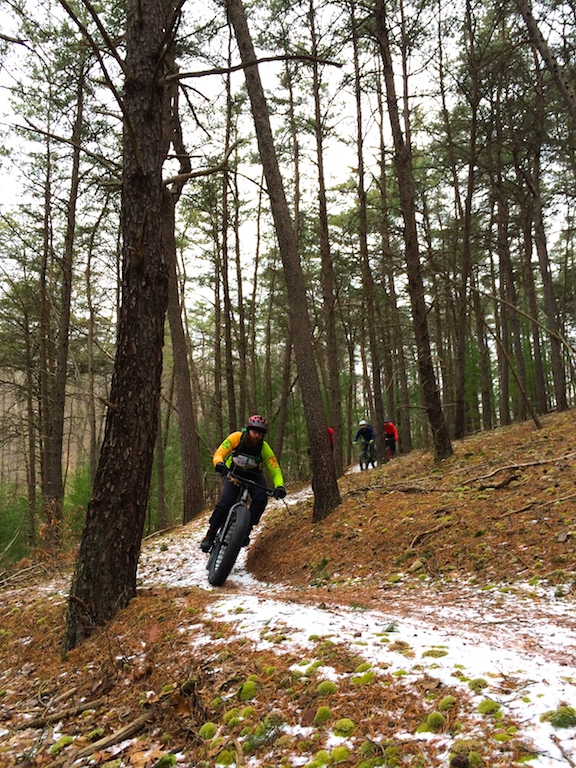 When the alarm woke me Saturday morning at o-dark-thirty, I felt like I got hit by a train. My head was pounding, my stomach was queasy, and my muscles hurt. Coffee helped, as did the small amount of food I choked down because I knew I’d need to fuel up for the 30 miles of snowy singletrack and mountain roads I was about to pedal. I had big plans to cook a hearty breakfast of eggs before the ride, but in my current state and with a shortage of time, that wasn’t happening. Instead, I packed plenty of snacks to consume en route, and joined the small crew of people basking in the heat of the fire still burning from the night before.

This is Frozen Fat, a small, intimate fat bike event nestled in the mountains of Central Pennsylvania, and the state’s only fat tire-only festival. This year was its fourth, with plenty of repeat participants and a gain in popularity year after year. But small numbers of people are part of the appeal, and the primitive winter camping accommodations are limited.

The festivities officially kick off Friday night, with a group ride to a local bar, where we gorge on burgers, sweet potato fries, and pitchers of beer amongst the surprised and confused locals. We then pedal back to camp, slightly buzzed, to a bonfire, kegs of good microbrews, and a lot of amped-up testosterone. The shenanigans that transpire each year vary, but there’s always sure to be some. And there’s always sure to be some very hungover people on Saturday morning. 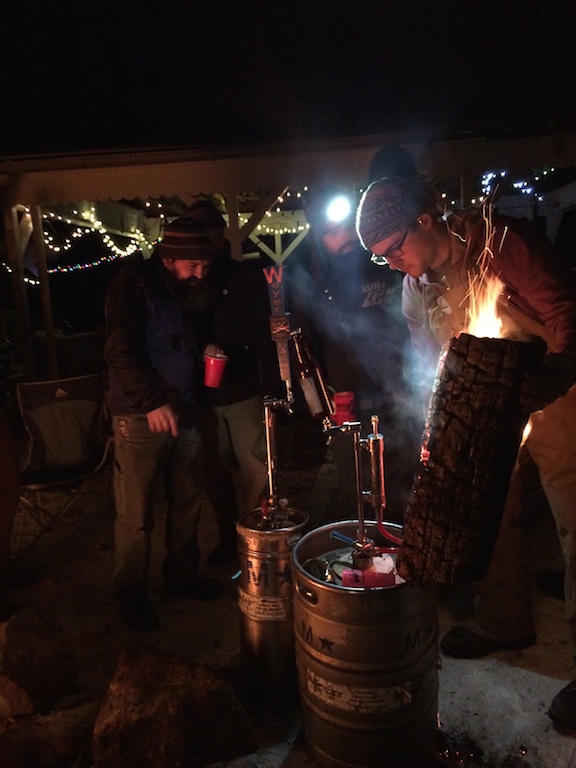 Saturday’s ride encompasses the “race” component of the weekend. Some riders take things more seriously than others, but most are just out to have a good time, ride bikes, and check out the amazing scenery that is Rothrock State Forest. Rothrock boasts beautiful, technical singletrack and fun fire roads, which had turned into sheets of ice this year after several days of thawing and refreezing prior to the event. Those with studs were thankful, myself included.

There is always a longer and a shorter ride option–this year’s distances were approximately 30 and 70 miles, respectively. Both courses utilize a mix of singletrack and gravel roads, and there’s never any shortage of climbing. I opted for the 30-miler, though months ago I had big dreams of trying my legs on the 70. My sanity took over, however, and it’s a good thing: 30 miles through snow and ice was enough to kick my ass.

The ride began in the old-growth hemlocks of Alan Seeger Natural Area, sunlight filtering through the trees, the snow-covered road sparkling in the morning rays. The field of riders quickly spread out–some taking it easy while others gunned it from the get-go. I fell somewhere in between, along with my friend Brent. The beginning of the singletrack was painful, a gradual uphill slog that made me slightly regret all the Dales Pale Ale and post-midnight tug-of-war, but finally my legs realized what they were supposed to do and I found my groove. We caught the leaders at the top of the mountain, where they were all stopped, confused at a trail intersection, unsure of where to go. This year, it was common knowledge that I’m a local to these parts, and throughout the ride, some people decided to stick with me for geographic guidance.

I got everyone back on track, and we descended back into the valley together via a loose, steep path that ended with multiple rhododendron-cloaked stream crossings. At the top of the next climb, we found the first checkpoint, where we were greeted by smiles, snacks, and water–a good thing since my hydration pack hose had frozen solid.

The sun came out for most of the rest of the ride, and Brent and I fell into a good little crew of people who had fun and supported each other until we dispersed again at the next checkpoint, towards the end of the ride. 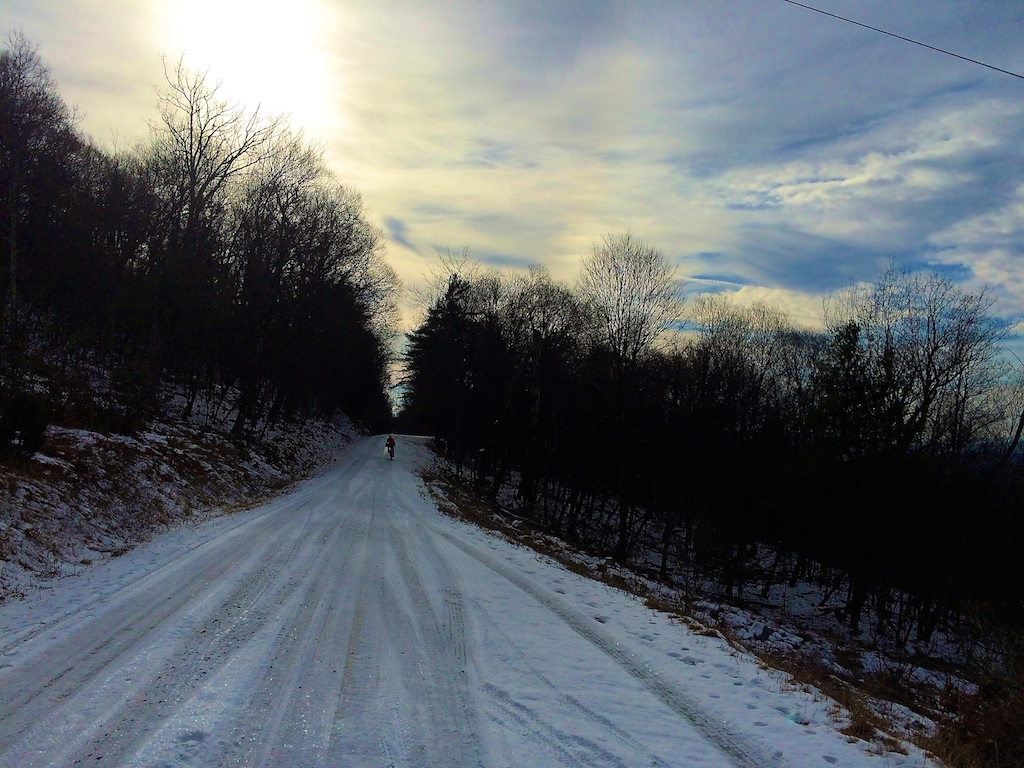 The last climb was solid ice, as was the descent and final few miles back to camp. I just hung on for dear life, gritted my teeth, and tried not to make any sudden movements. Amazingly, I stayed upright to the finish, and was welcomed warmly by both the smiling faces of fellow fat bikers and the dancing flames of the fire.

Though it’s technically a race, Frozen Fat is about camaraderie, not the competition. It’s a feat in itself to finish either ride, which generally takes places during some of the coldest weather and harshest conditions Pennsylvania has to offer. I don’t know who ended up winning the 30-mile race. There was no podium or awards ceremony. Instead, there were high fives, a potluck dinner, and bike sled pulls until everyone fell into their chilly tents, exhausted and in varying states of inebriation. 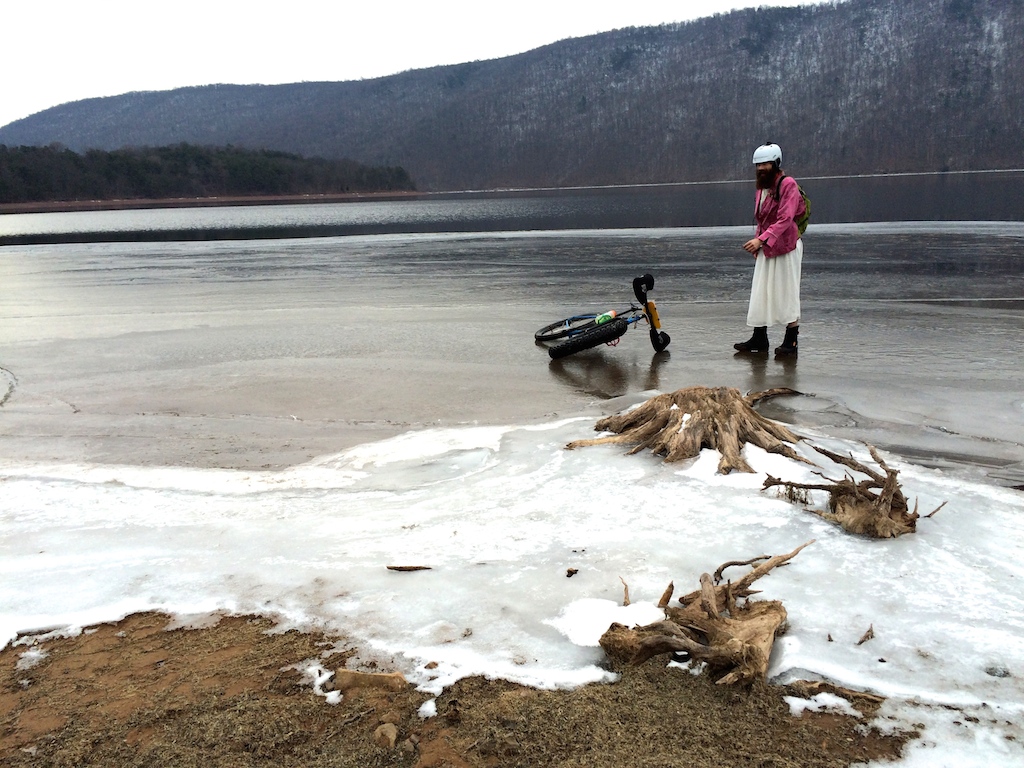 If Saturday’s ride is serious, Sunday’s is anything but. Instead of endurance, it focuses on silliness—costumes, derbies, and wheelie contests. The venue changes from Rothrock to the Allegrippis Trails and Raystown Lake, where participants take part in “11 Stages of Enfattenment,” a loosely-organized series of fun and friendly competitions. This year, there were lots of log rides and testing thin ice on the lake. Flasks are encouraged, and passed around frequently. We rode for a few hours and then headed back to the parking lot to say our goodbyes.

Last year was my first Frozen Fat experience, and it changed my life and how I look at myself as a rider. It empowered me as a woman who mountain bikes and hangs with the dudes. It’s fun, it’s friendly, and it’s something to look forward to every year when we’re all in the midst of the winter blues. So grab a fatty and join us. You may be cold and miserable at times, but you sure as hell won’t regret it.

For more information, check out www.frznft.com.

Helena Kotala lives in rural central Pennsylvania, a hidden gem for mountain bikers and other outdoor enthusiasts. She’s been avidly mountain biking for about two years, and it was fat biking through the snow that won her over. Consequently, those bloated tires and frigid temps have a special place in her heart. When she’s not riding her bike, Helena is probably teaching stand-up paddleboarding, writing her blog, or hanging out with her alpaca herd.