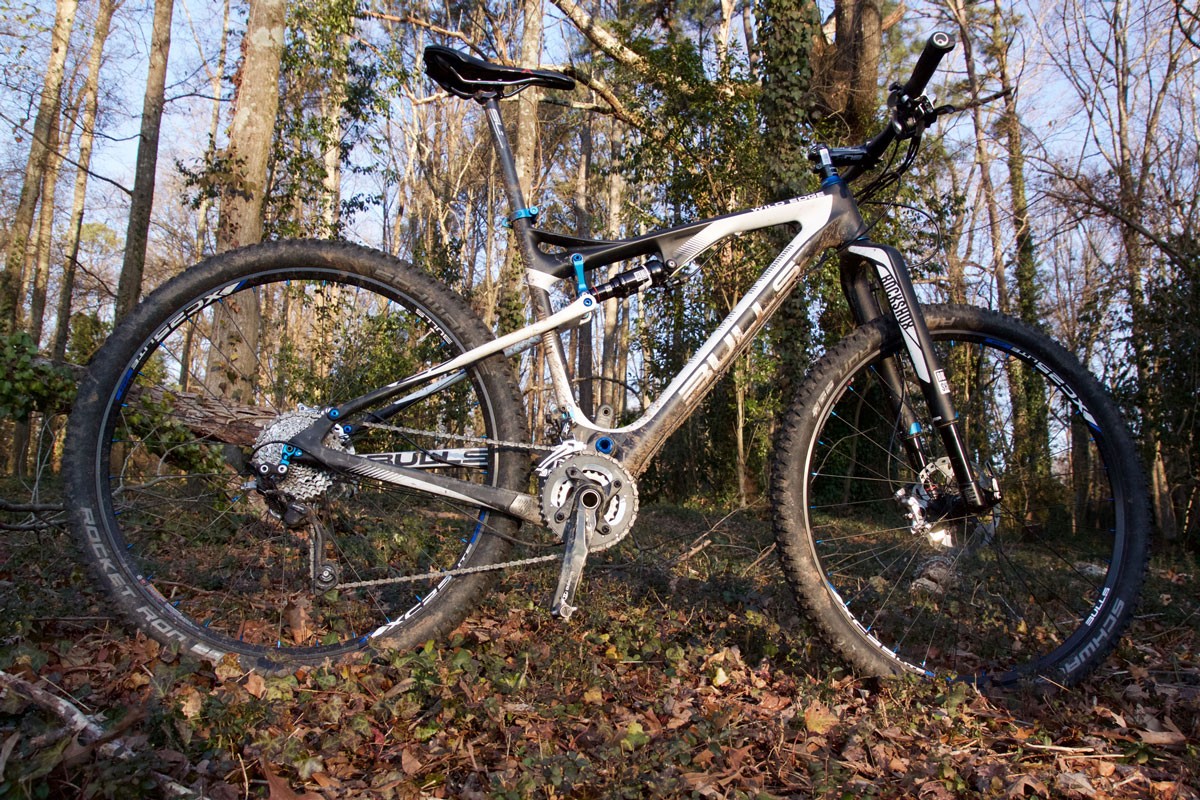 The BULLS brand was launched by German bike distributor ZEG in 1997 and began making a name for itself in the mid 2000s with big marathon and stage race wins by Team BULLS riders. The brand recently started selling mountain bikes online, direct to consumers in the USA, and offers bikes ranging in price from $649 for a basic hardtail all the way up to $5,899 for a top-of-the-line XC race bike.

The Wild Edge 29 sits near the top of the BULLS line and is clearly designed with serious mountain bike racers in mind. The carbon monocoque frame utilizes BULLS’ Endurance Lite Concept, which seeks to produce a frame that’s stiff where it needs to be and flexy where it doesn’t. The goal is to build a bike that’s comfortable for the rider but without sacrificing performance. 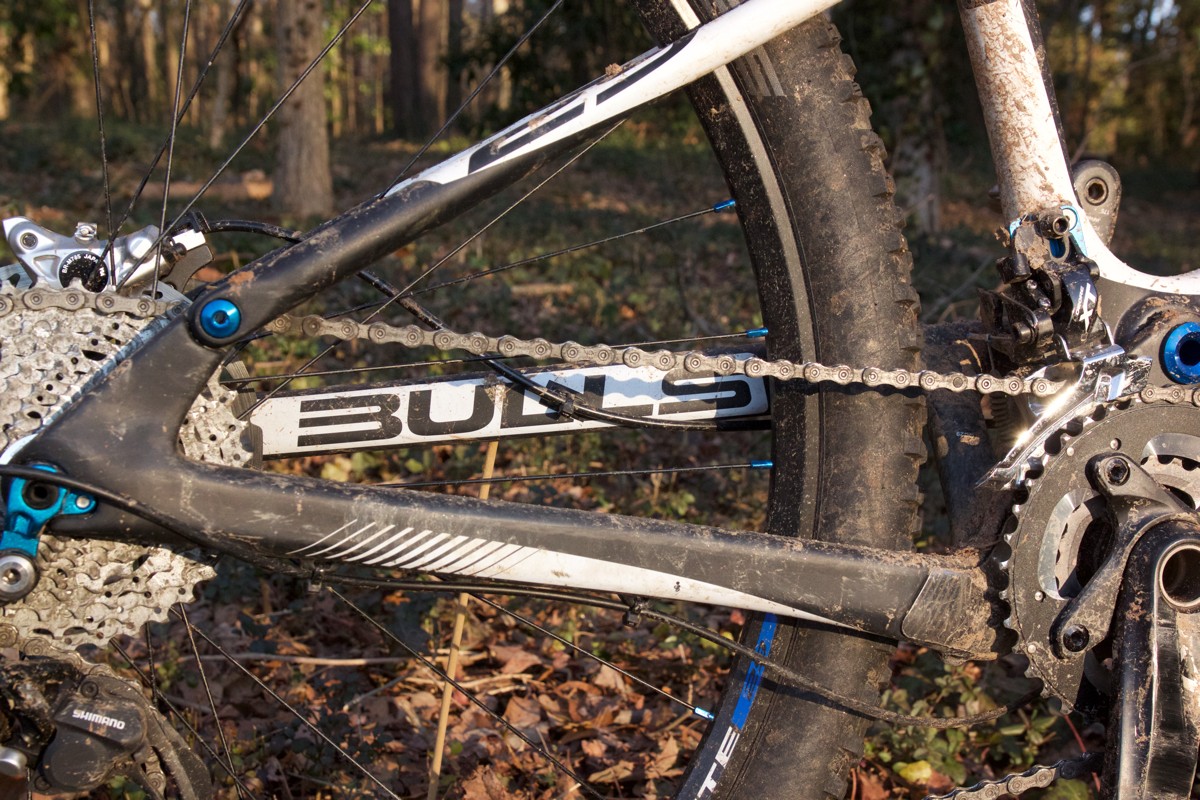 The Wild Edge utilizes a single pivot suspension design with 100mm of travel and wildly asymmetrical chain stays. This is a simple and proven design that provides excellent pedaling efficiency while still offering predictable control in rocky terrain.

This bike features a steep 70.5° head tube angle and 460mm chainstays, making this an aggressive climber and stable ride. More “playful” bikes boast much shorter chainstays, so clearly the BULLS Wild Edge means business. The standover height on this bike is a lofty 820mm (more than 32 inches), and while I didn’t have any issues (I’m about 6’3″), others may want to check their inseam before climbing aboard. BULLS only offers this bike in medium and large frames (about 18″ and 20″ seat tube lengths) and curiously, the standover height is equally high for both models. I tested the large frame and personally found it to be a great fit. 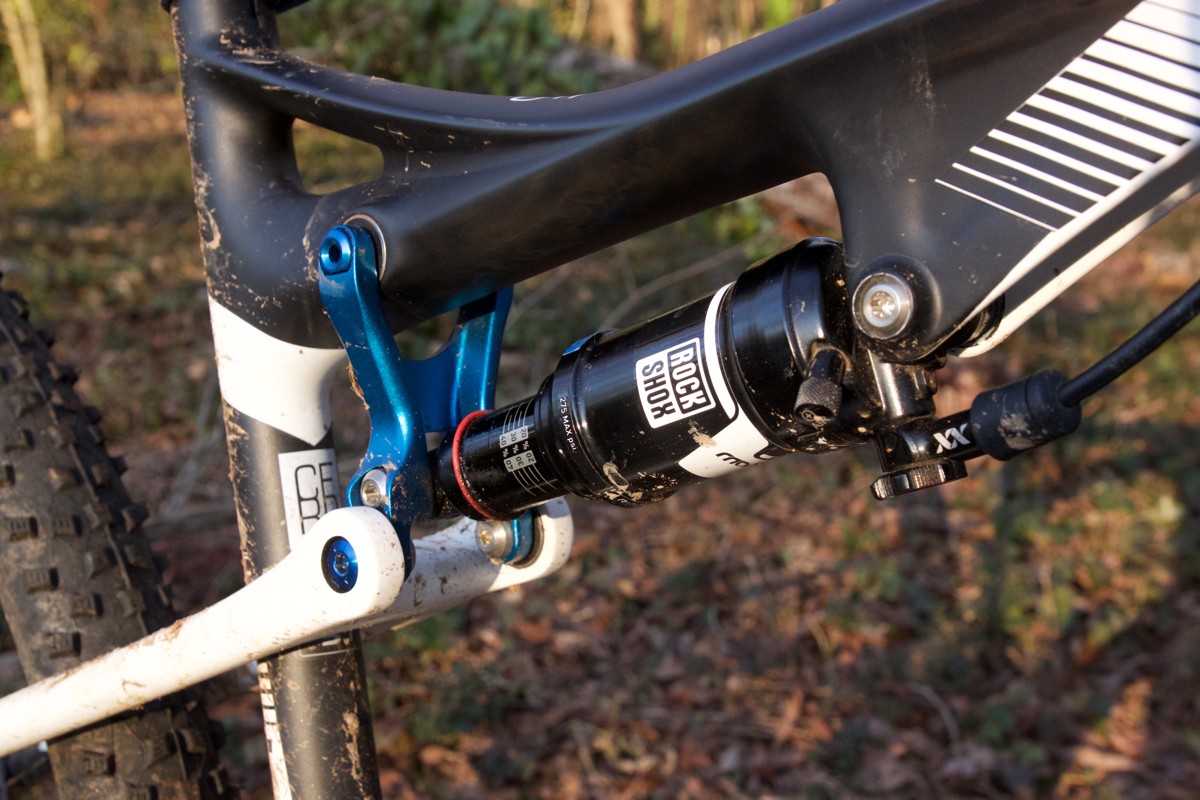 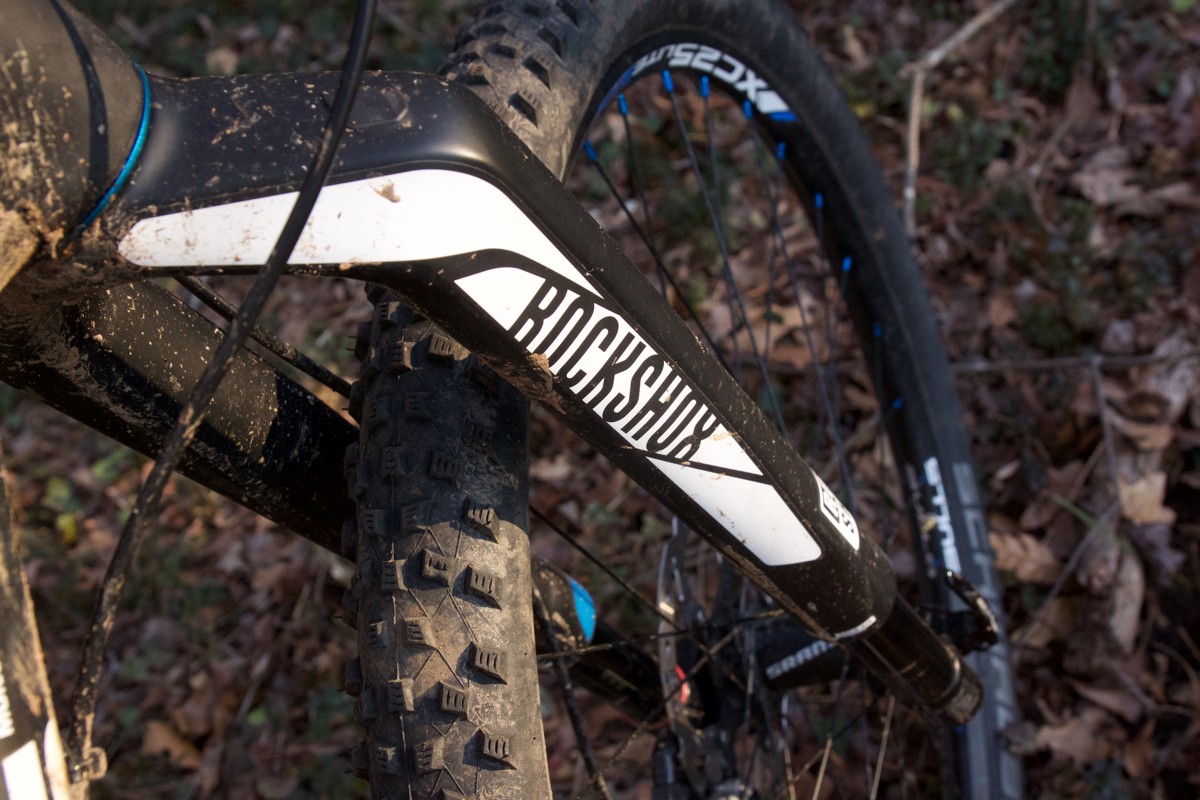 Beyond the frame, riders will immediately notice the RS-1 hanging off the front of this bike. Yes, BULLS was able to include this inverted RockShox fork at this price point, which is pretty impressive given how expensive the RS-1 is by itself. The black matte, carbon uppers on the RS-1 match perfectly with the Wild Edge carbon frame. The rear shock is a RockShox Monarch XX and BULLS even throws in the Full Sprint remote that controls both the shock and fork with a single click. Both front and rear travel on this bike are pegged at 100mm.

BULLS opted for a 142x12mm rear axle, which is a little surprising given that so many bikes these days are spec’ing Boost 148. Still, this is a cross-country bike where the benefits of Boost 148 aren’t quite as important as on, say, a trail bike. 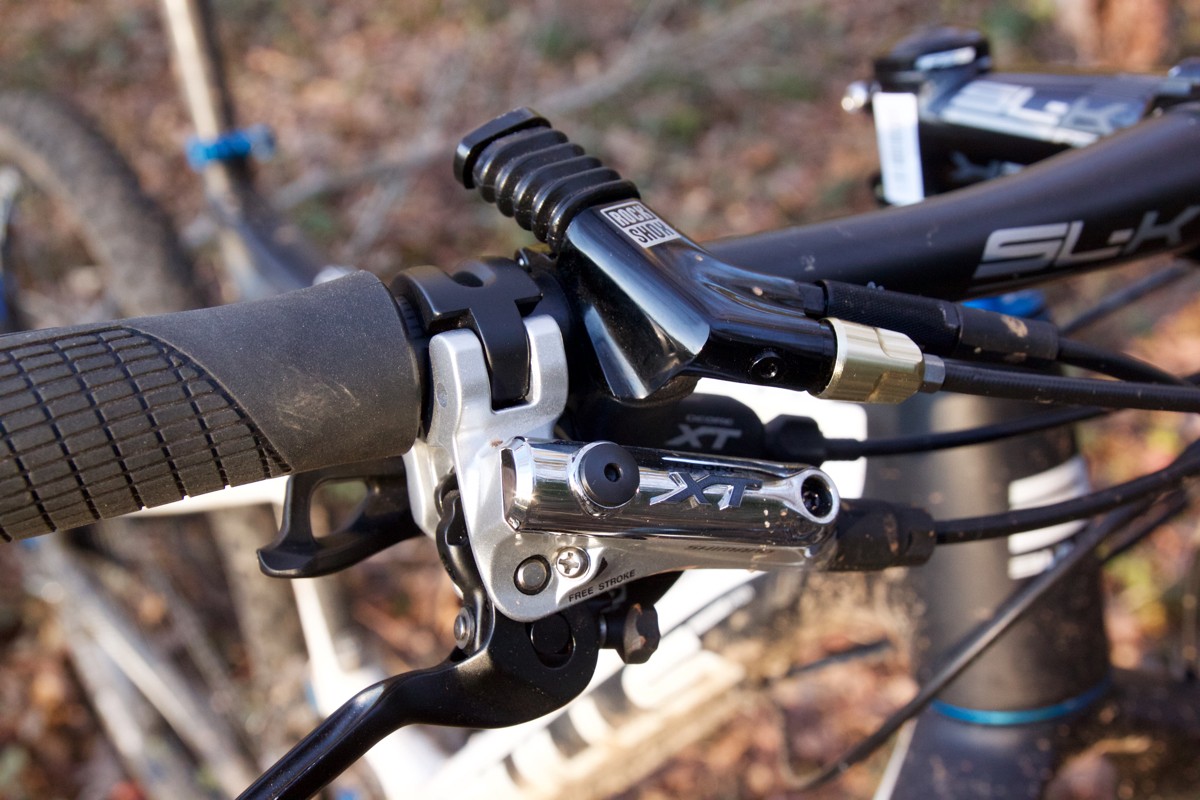 The Wild Edge 29 ships with a 2×10 Shimano XT drivetrain and XT brakes. (The Wild Edge Team edition upgrades both to XTR and drops nearly two and a half pounds.) Up front BULLS opts for a big 180mm rotor and a more modest 160mm rotor in back. Wheels are pretty standard, with BULLS-branded rims and XO hubs, and while the rims are taped and appear ready for a tubeless setup, they shipped with tubes installed. The Wild Edge 29 comes with Schwalbe Rocket Ron 2.25″ 29er tires.

Rounding out the build package, the stock handlebars are flat, 700mm, carbon bars from FSA with Ergon GA1 EVO grips. The saddle is a Prologo X Zero X T2.0 and both the stem and seatpost are FSA SL-K alloy parts. Curiously, BULLS specs a quick release seatpost collar, which looks nice and is well-made, but feels out of place on such a high end bike. 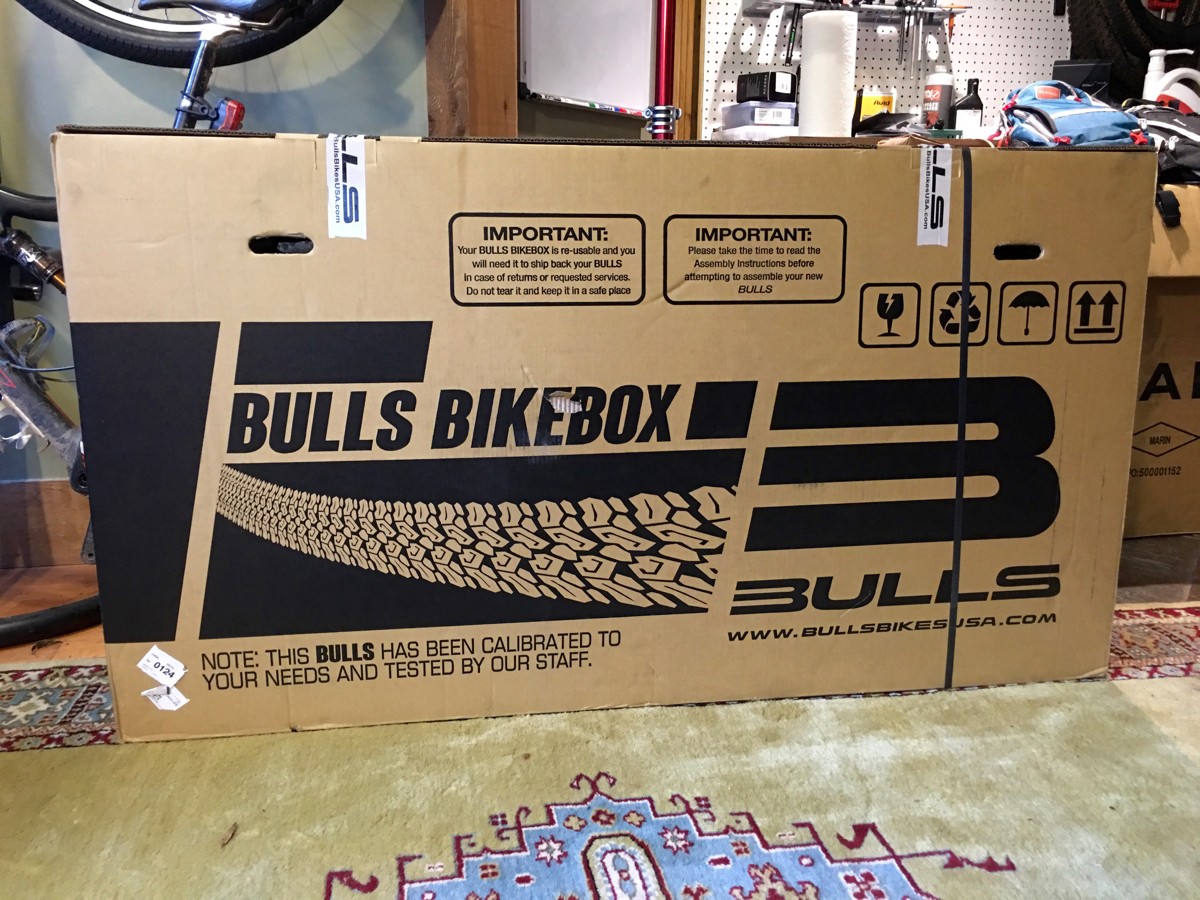 Because BULLS is a direct-to-consumer company, the shipping process is an important part of the consumer’s experience. My bike arrived just as any other would arrive after an order is placed via the website. The company claims the bike comes 99% assembled and though I don’t know the exact percentage of assembly I ended up doing, it certainly wasn’t very much. 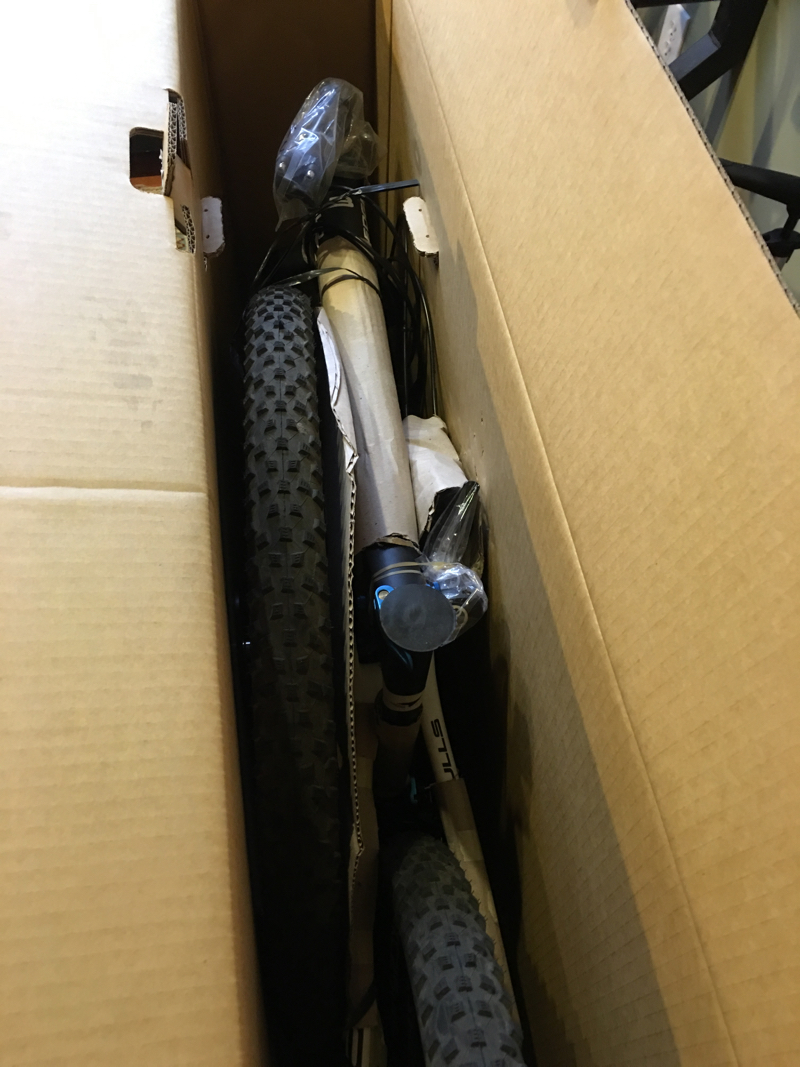 Out of the box I found my Wild Edge 29 to be completely tuned: everything from the derailleurs to the brakes to the suspension were all dialed. The sag was even set just right for me, though that was probably a coincidence. Even the tires were pretty well inflated. The only thing left for me to do was to attach the handlebar to the stem, install the front wheel and saddle, and screw my pedals into place. That was it!

One minor issue I discovered after a few rides was that one of the rear suspension pivot bolts was loose. It’s entirely possible this wiggled loose during one of those early rides but this bolt was WAY out of place, which makes me think it might not have been tight enough to begin with. Fortunately it was a quick and easy fix with an allen wrench. 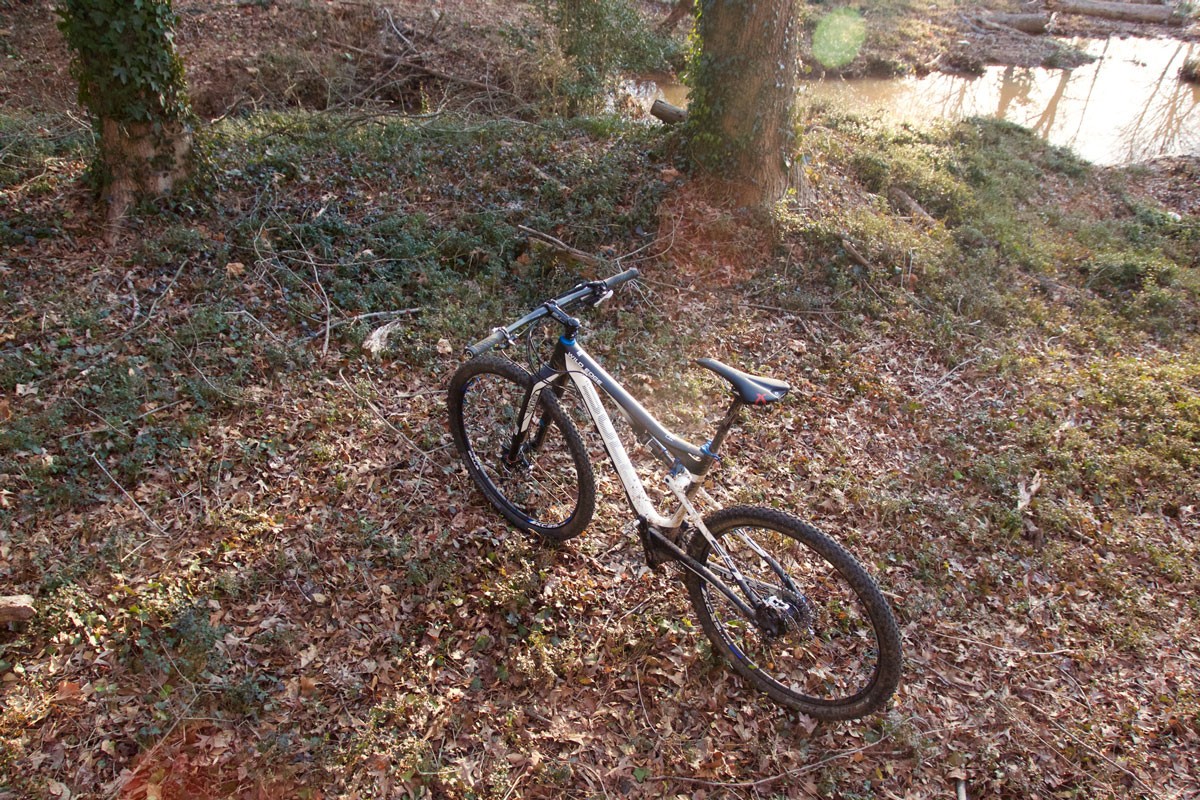 BULLS offers the WIlde Edge 29 in exactly one color scheme (black and white, as shown), so in many ways it’s a pretty vanilla-looking bike. But look closely at the blue anodized parts (headset, linkage hardware, seatpost collar, wheel and fork decals, etc.) and you’ll find the overall look is well coordinated and has some nice details. I call it “minimalist, lightweight chic.”

All told, my size large test bike weighs 26.25 lbs with pedals and mud, within range of the claimed weight of 25.14 lbs. It’s a little lighter than my own Santa Cruz Tallboy and could go even lighter by ditching the tubes and other bits like the bulky QR seatpost collar. Then again, the Racing Ralph tires are pretty under-gunned IMO and, I suspect, a favorite of bike companies just because they’re so dang light. If this were my bike I wouldn’t run the Rocket Ron tires for long, opting instead for a burlier (and heavier) tire. 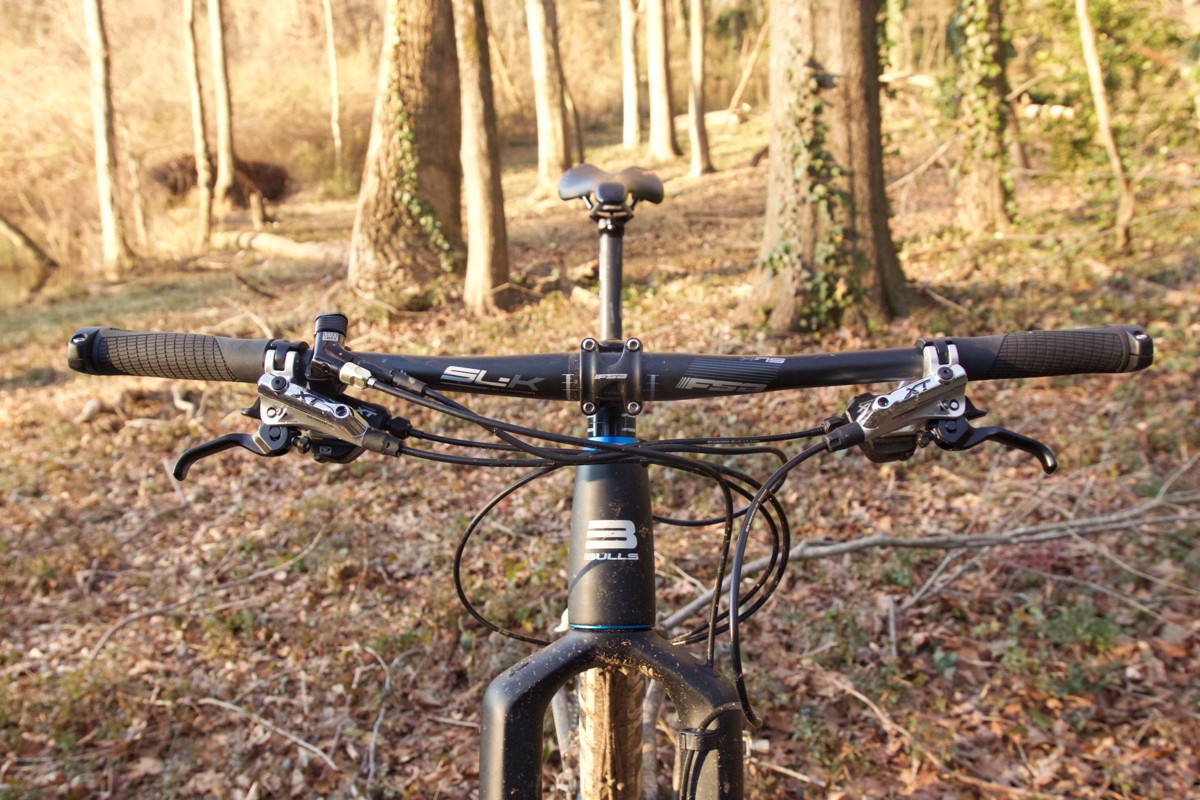 BULLS has put together an impressive XC race bike with the Wild Edge 29 and is offering it at a competitive price point. The only question is, how would the bike perform? Read on to find out…

Yeah, I actually didn’t know the MSRP when I was testing the bike and was (incorrectly) telling everyone who saw the bike that it cost $5K. Saying the bike “only” costs $3,800 doesn’t sound right because it’s still a good chunk of change but it really is a great value.