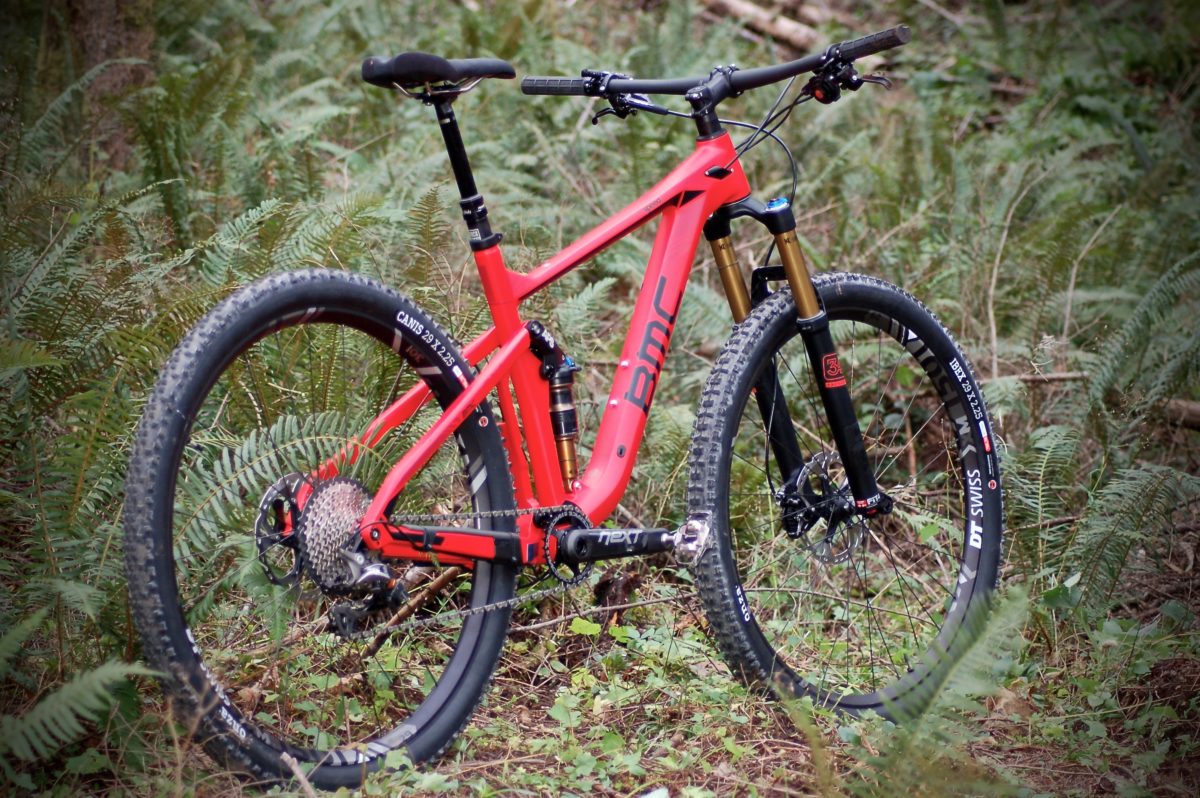 Whether you can’t afford it, loathe juggling multiple maintenance protocols, don’t have the wall space for, or worse, the time to ride multiple bikes, a quiver-killing, do-it-all trail bike is the one you must seek. But these days, finding (and creating) that all ’rounder promising to deliver the perfect balance between climbing, descending, and everything in between with little to no compromise seems lofty at best.

Enter, the Speedfox 01–a full-carbon, 130mm-travel, 29er from Switzerland-based, BMC.

BMC offers the Speedfox (SF) in three builds with varying amounts of carbon used in the frame’s construction. Tested here, is the Speedfox 01, a full carbon frame with XT-XTR components for $6,499. The SF02 employs an alloy rear triangle with BMC’s premium carbon for the front and full XT for $4,999, and for $3,999, you can get on a full alloy SF03 with SLX. All Trail Series SFs are 29ers and come with a Fox suspension package. 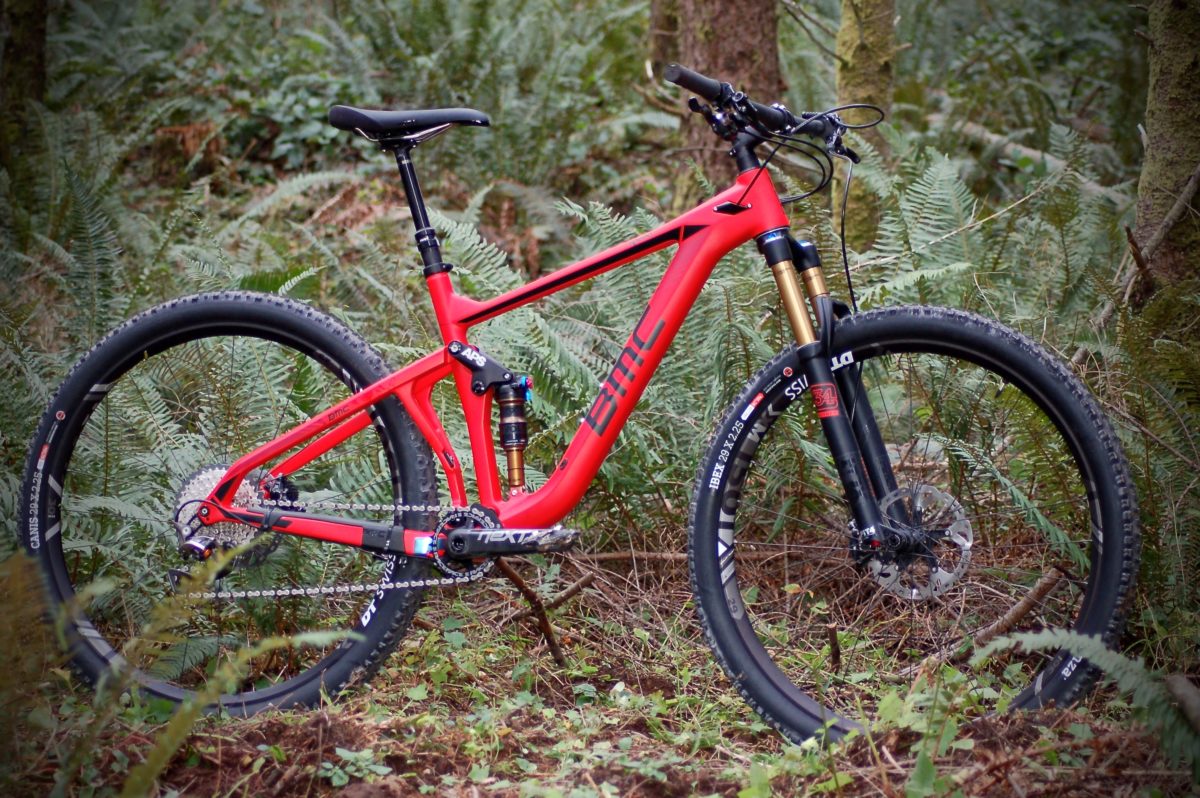 Bottom Line: with a full-carbon frame, top-tier Shimano and Fox components, and 130mm of travel paired with a 29-inch wheel platform, the Speedfox 01 sits atop BMC’s do-it-all, jack-of-all trail bike category. The Speedfox was as effortless on the climbs as you’d expect a carbon 29er to be, but caught me by surprise at how capable it handled the rough and tough as long as you’re willing to dance with it rather than mosh.

Like very few companies out there, BMC has mostly stuck to their guns with the 29er platform, and you won’t find anything smaller in diameter until further down the line in their all-mountain series. This is a deliberate move by BMC due, in part, to their focus on refining 29er geometry with shorter chainstays (435mm), a slacker head tube angle (68.5°), lower bottom bracket (35mm drop), and longer reach (435mm, medium)–design principles BMC calls their Big Wheel Concept (BWC). Based on the numbers, there are certainly other bikes that would push the BWC protocol further, but for a trail bike that targets all-around performance, the SF looks balanced and capable. 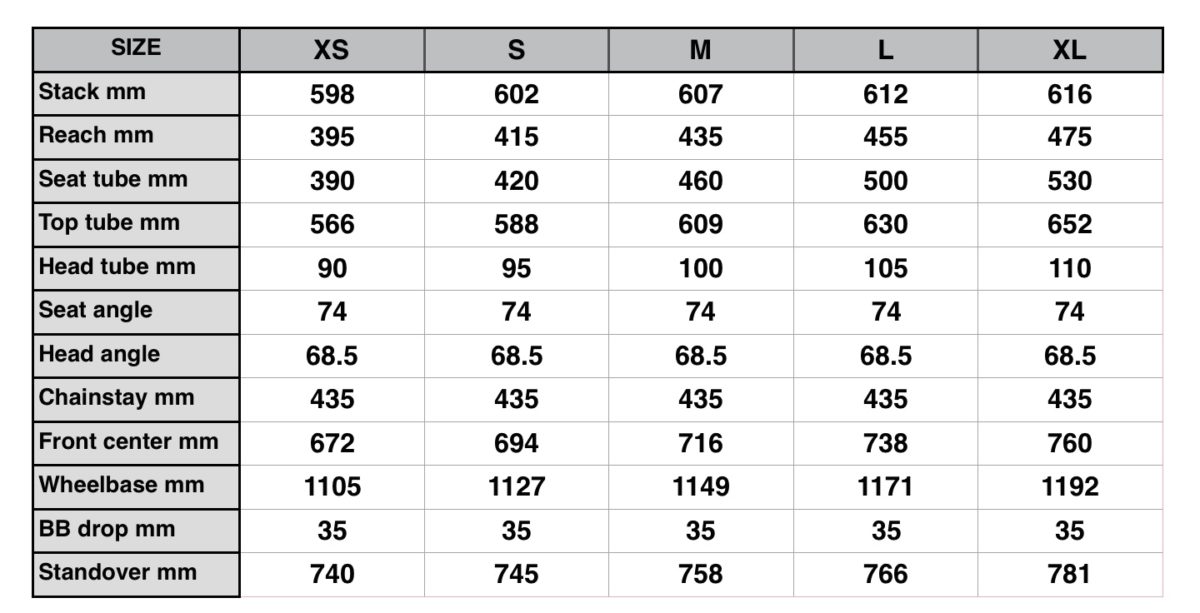 The Speedfox is built around BMC’s Advanced Pivot System (APS) which is also found on every other BMC mountain bike from XC race to all-mountain enduro. In this rendition it has been optimized specifically for the Speedfox, hitting a sweet spot for all-around performance in climbing, descending, and small bump compliance. The APS is a relatively compact, four-bar structure featuring a solid rear triangle connected to the front by a short lower link and upper rocker link, actuated by a pristine Fox Float Factory EVOL to produce up to 130mm of travel. 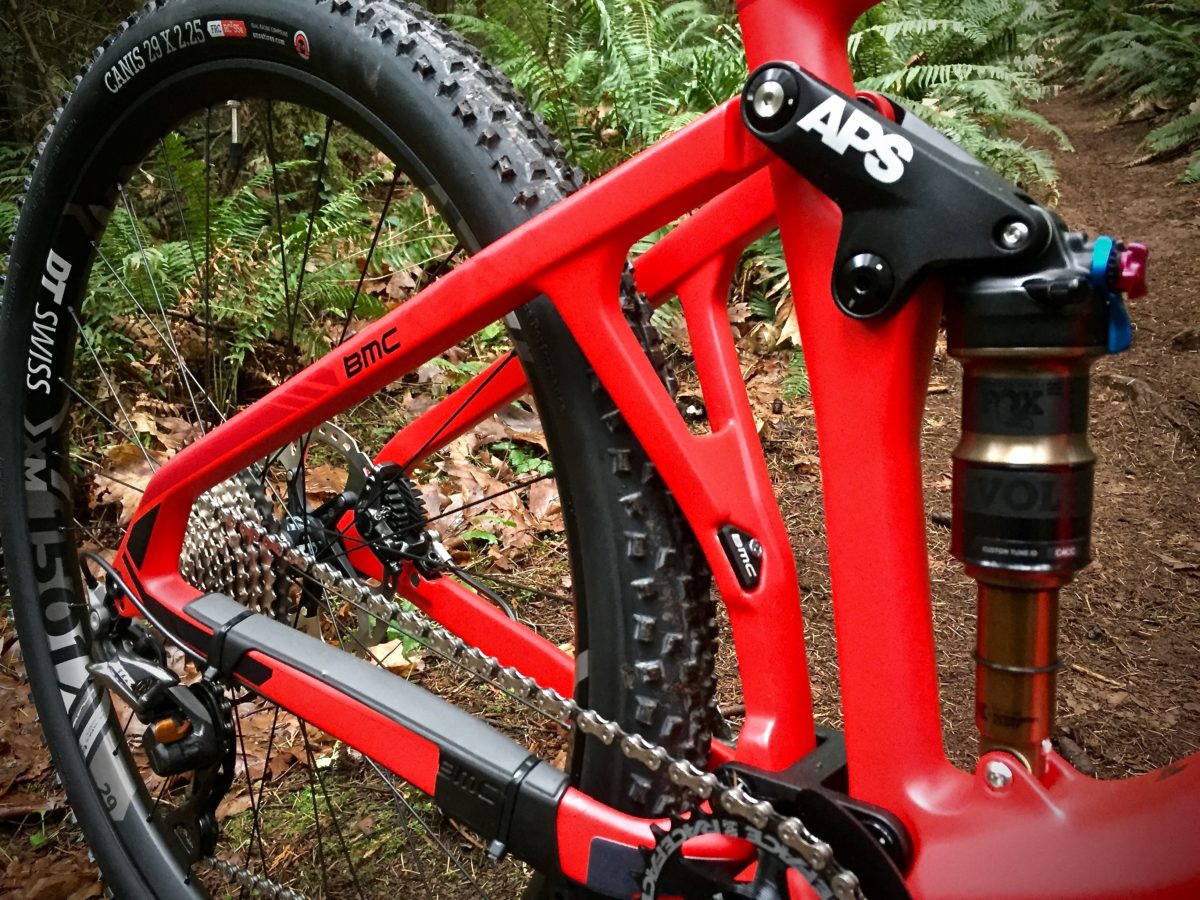 BMC has never been one for curvaceous, noodley-looking frames, and the Speedfox is no exception. Straight lines and sharp angles make for a slender, simple look, yet upon closer inspection, an oversized, hexagonal down tube and chain-to-seatstay arm (is there an actual name for this thing?) lets you know that this bike is more than just showroom-ready. 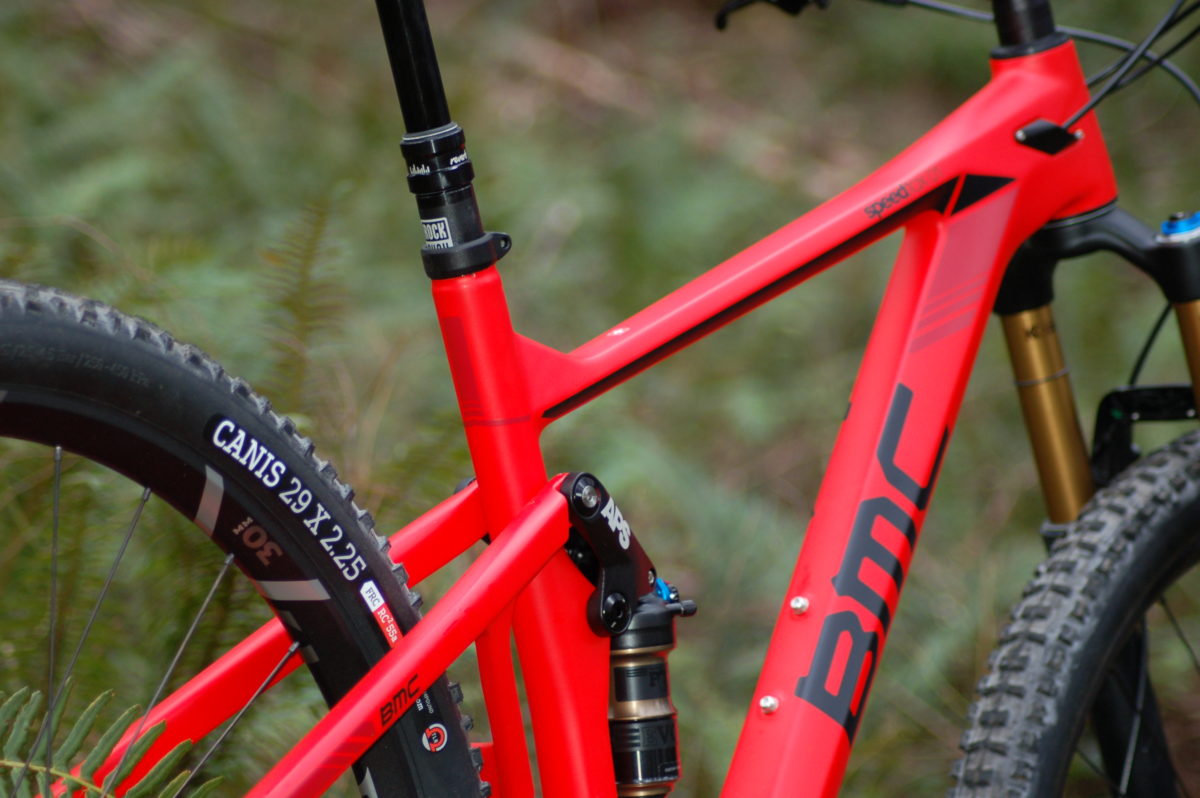 Fans of internal routing will be more than pleased to note BMC’s attention to detail, including two plastic-capped ports on each side of the head tube accommodating a total of six cables (three each), and equally clean exit points underneath the down tube, along the distal end of the brake side chainstay, and the lower portion of the drive side down tube if you choose to run a front derailleur. Rear derailleur housing exits beneath the front triangle and gets the zip tie treatment, integrated with a stout, molded rubber chainstay protector. 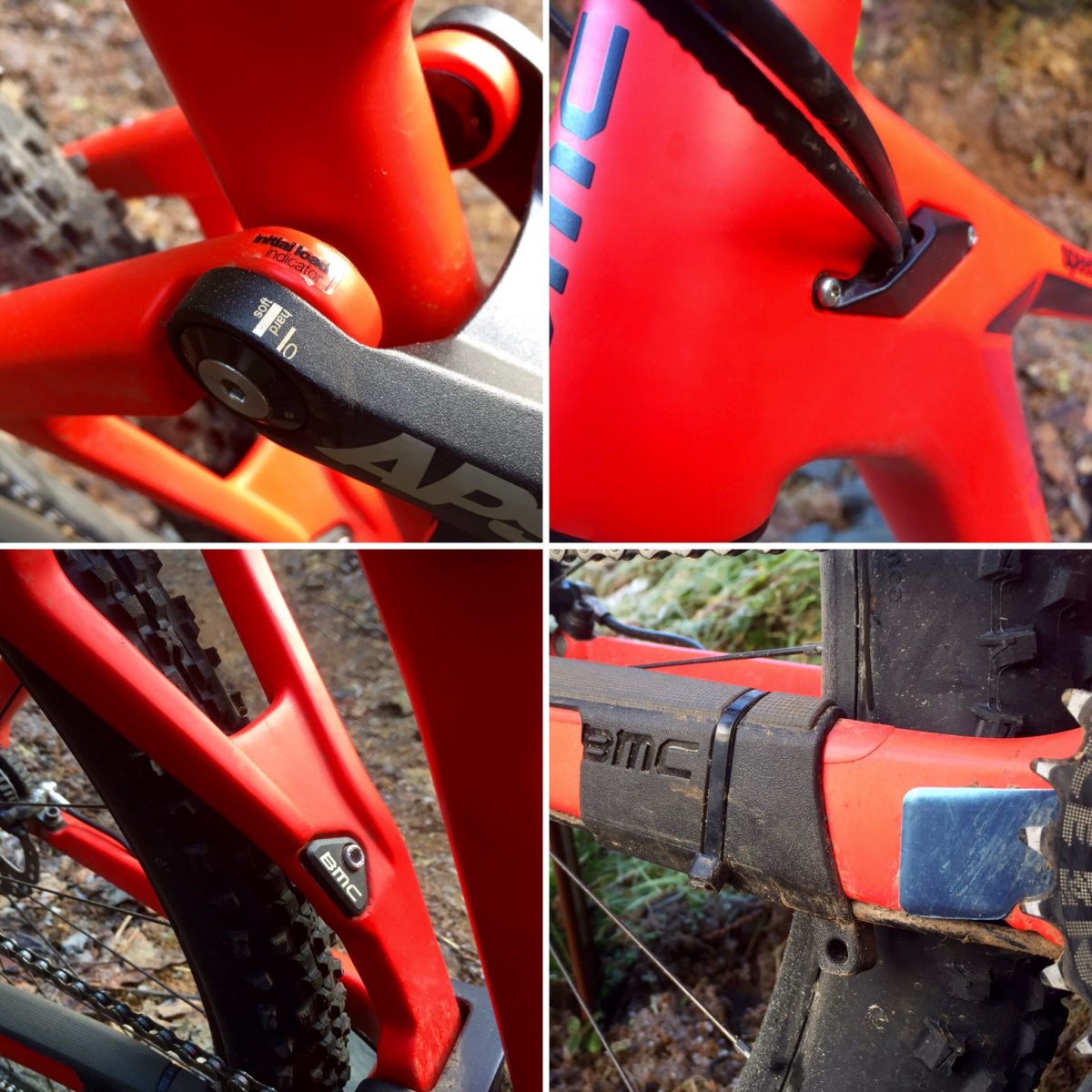 A front derailleur mount is located on the rear triangle on that brace connecting the chain and seatstay. A front mech here is thought to make better use of space, with movement of the suspension. If you leave the Speedfox as a 1×11, the mounting plate is tucked neatly out of view. Integrated frame protection adorns the down tube and chainstay to keep your plastic fantastic, and there are also mounts for adding a chain guide and/or tensioner. Oh, and for the bottle mount fanatics, there’s one inside the front triangle. 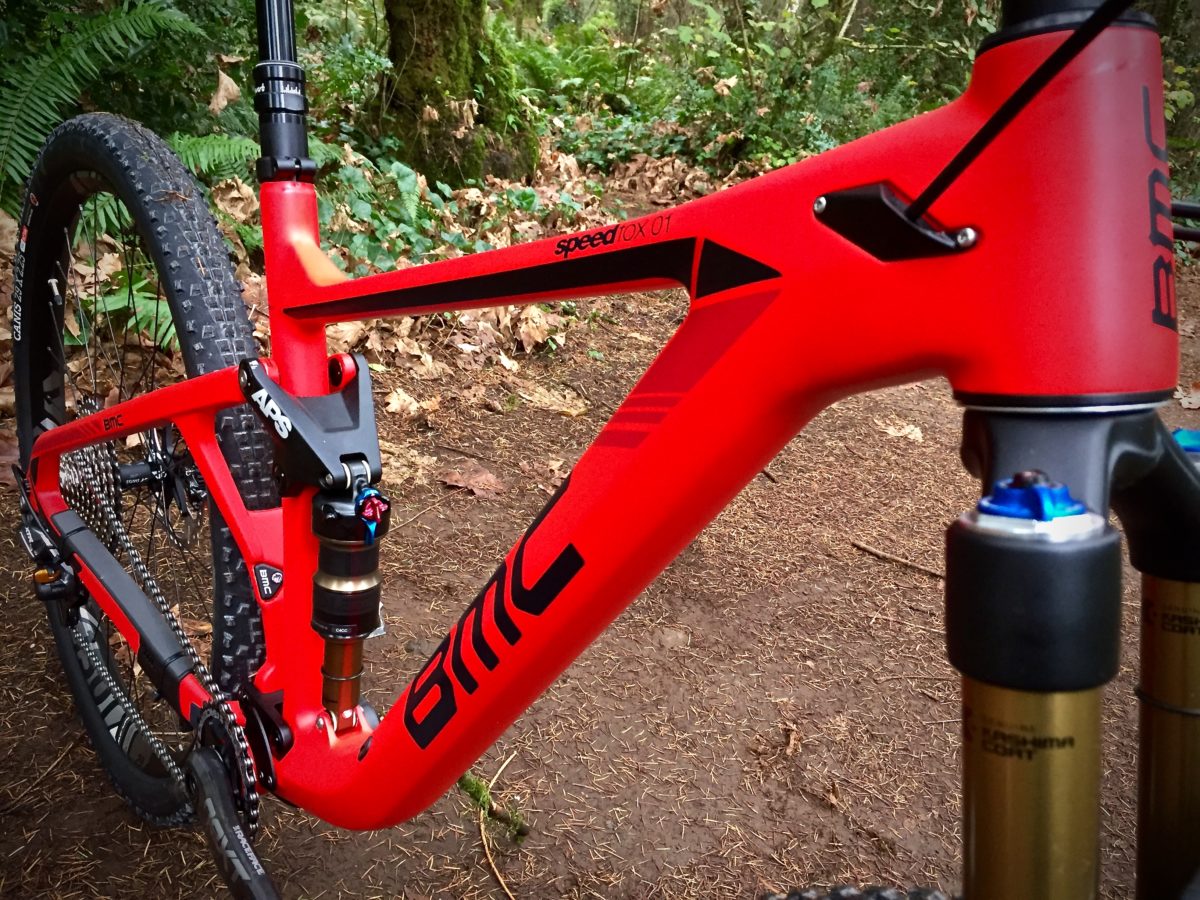 Lastly, one particular feature I found very useful, yet not difficult to employ, was the frame-integrated sag indicator. When setting up the Speedfox’s suspension, laser-etched markings on the rocker link and seatstay indicate a range of sag between “hard” and “soft” that is visualized from above while seated, eliminating the need of a second person, shock O-rings, and ninja-balance when using conventional methods. 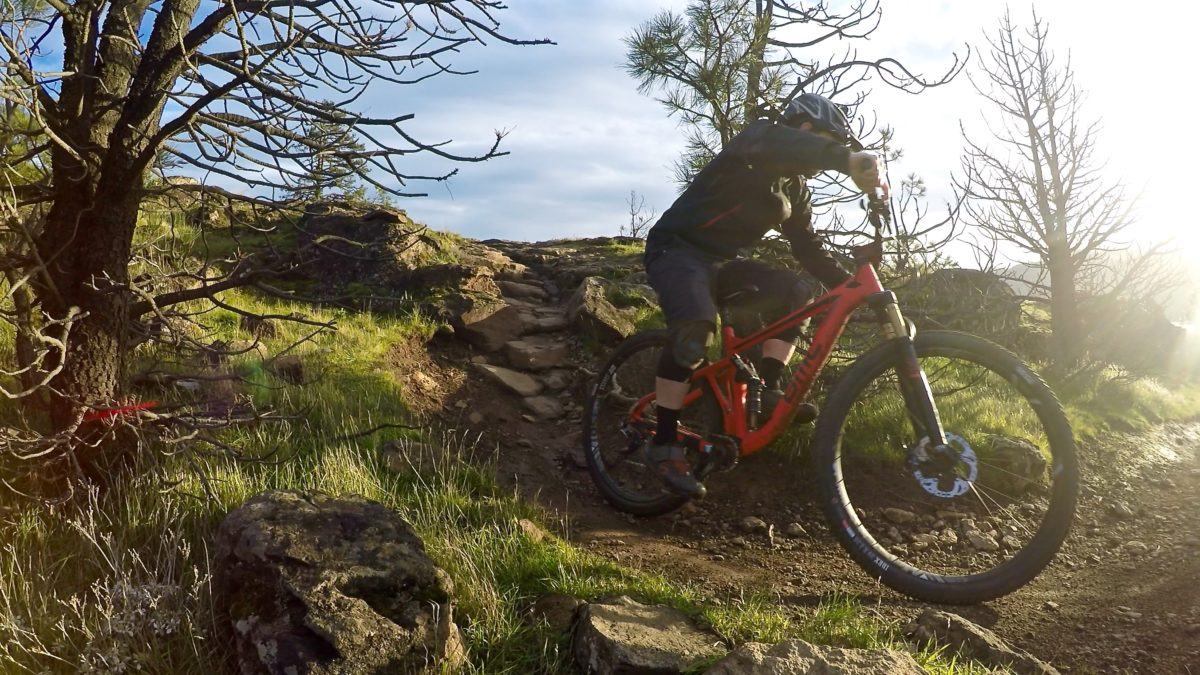 Not surprisingly, rolling out on a set of standard-width 29ers was (and always will be) less of an effort than any other wheel size or width currently available. That’s not part of the review, rather a fact. That said, what the hell is with the 2.25″ tire spec’d front and rear on a trail bike with 130mm of travel? It was my first time on Onza tires–also a Swiss-based company–and while they actually surprised me (just a little), a bike of this stature deserves much more than a measly XC rubber. What’s more, the drop-dead DT Swiss XM 1501 wheels, with a 30mm internal width, practically begs for something wider. On a steed marketed toward versatility, I enjoy seeing a mix of widths and would at least start by upgrading the front to 2.4″. But I digress… 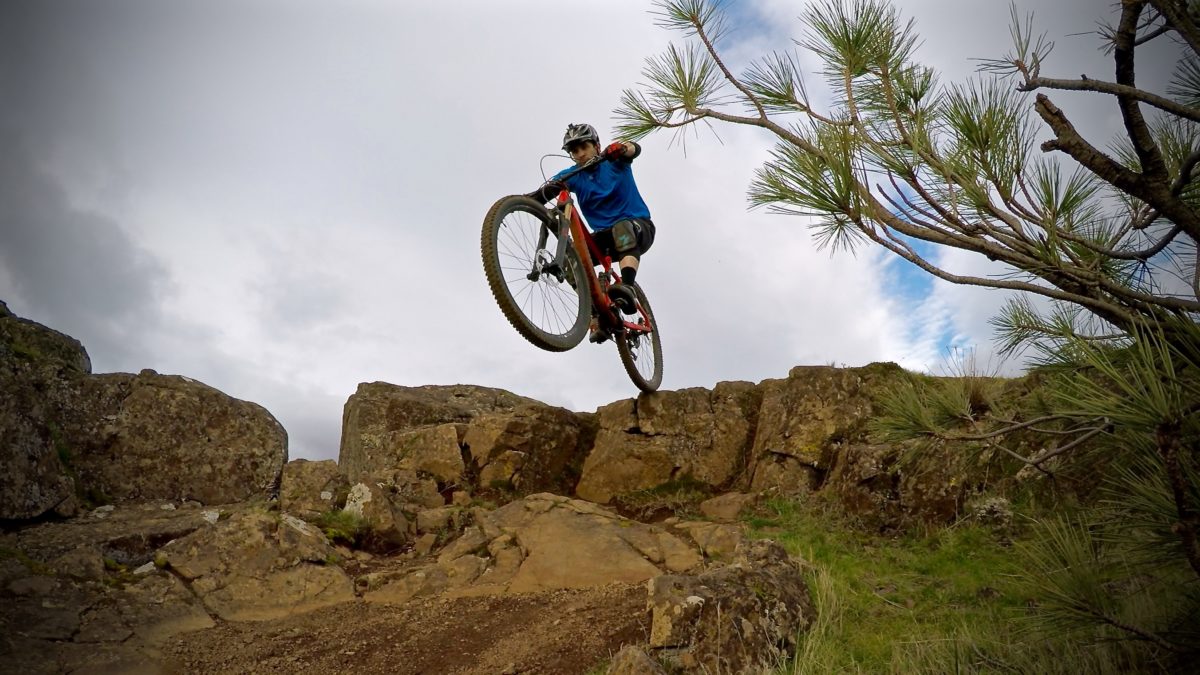 Climbing on the Speedfox was an absolute treat, but again, what would you expect from a carbon 29er? For me, where good and not-so-good climbing characteristics begin to separate is in how likely I am to flip the suspension’s damping switches when it’s time to dig deeper. For the sake of a thorough review, I did, but can also tell you BMC has clearly refined their APS platform such that the Fox Float can (and probably should) be left open all day, no matter what the trail demands. On that note, if you are a contraption captain, hitting switches as often as they’re available, you’d be hard-pressed to find a platform that feels as stiff as the Speedfox is in climb mode. 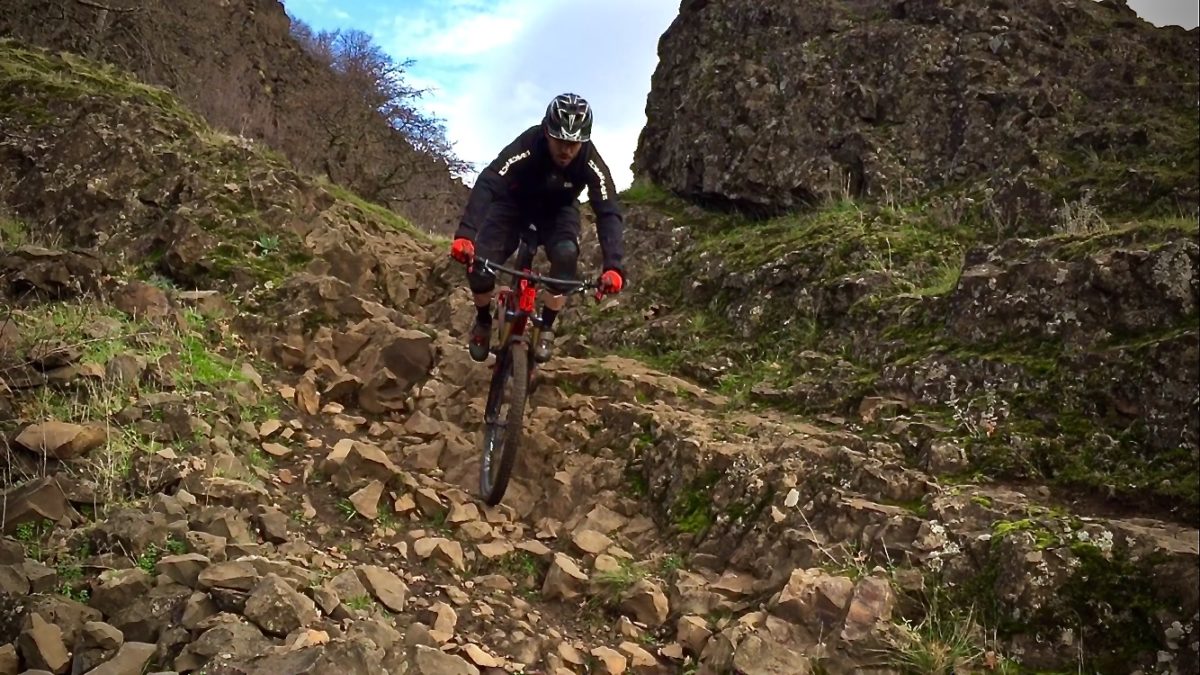 The Speedfox rides higher in its suspension devoid of that in-the-bike feel when diving in and out of corners or laying down sections of repeating hits and drops, yet not annoyingly so. It somehow felt very natural to be “on top” of the Speedfox, and it may very well have to do with the low stack height (607mm), 35mm bottom bracket drop, 150mm Reverb Stealth dropper post, and somewhat slack 68.5º head angle. And, although flat is my least favorite shape of bar, the 760mm-wide, BMC-branded, carbon flat bars were likely helpful in making the bike not feel too high. 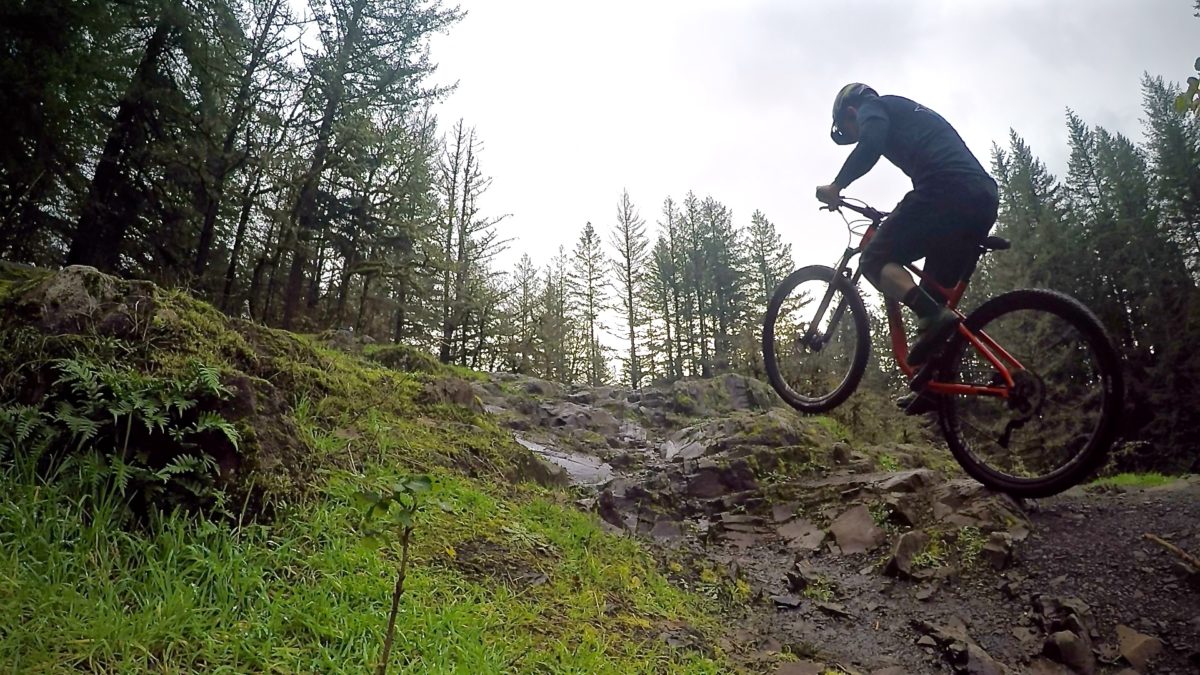 Speaking of geometry wins, the longer reach kept the conservative head tube very stable on descents. A 70mm stem seems to be an industry consensus for many bikes with similar design targets to the Speedfox, but I just couldn’t resist slapping on something shorter and ultimately felt much happier descending with 60mm. BMC also did a bit of swapping since last year, moving from a Fox 32 to the highly acclaimed Factory 34, which likely did wonders for the Speedfox’s descending prowess. The only time I felt the Speedfox slightly overwhelmed was on longer stretches of ledgy, rock-infested gnar very similar to what you would find in Moab. Do not mistake this bike for one you cannot ride on burly terrain, rather one with which you may have to employ a little more thought and skill before impetuous ramming like a bull in a china shop. 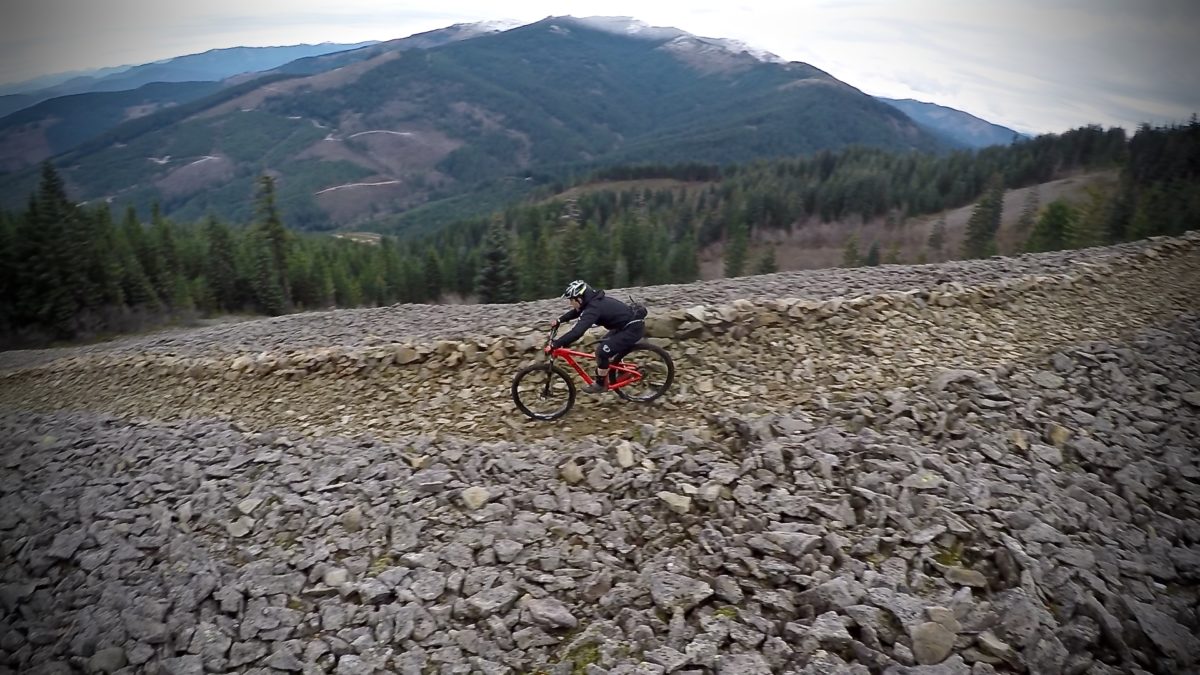 The Speedfox 01 is for the rider who wants one bike to do everything very, very well. Although it is not necessarily purpose-built, it will easily stretch itself beyond its original intent with very little compromise. The head tube angle, for example, is not all that slack, but when matched with a longer top tube and steep seat angle gives the impression that the Speedfox would make for as suitable an XC bike as a one for light Enduro. To that end, while there are many changes you could make to the Speedfox to alter its function and confidence, BMC has indeed made a very capable, balanced, and user-friendly bike right out of the box.

Thanks to BMC for sending over the Speedfox for review.