Bikes of Singletracks is series of blog posts that takes an in-depth look at the bikes the Singletracks crew rides.  These are our personal bikes, not bikes we have in for review.  This is what we ride, and why we ride it.

My first real mountain bike was a Giant Anthem – a lightweight 80mm full suspension bike with super fast handling.  I bought it in 2007 and rode it for a few years, upgrading some of the parts along the way.  At the very end of 2009 I built up a single speed, and the Giant was retired when the fork died.  However, many of the parts have been put back to use on my current bikes.

When shopping for a single speed back in ’09 no one made exactly what I wanted as a complete bike, so I bought all the parts and pieces seperately and built my own.  It’s more expensive that way, but I was able to get exactly what I wanted.  Nearly three years later, I have no regrets.  This is my favorite bike and it sees most of my local riding. 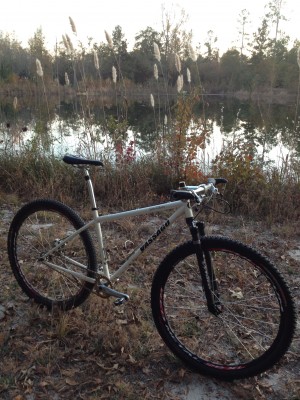 I wanted an affordable steel frame single speed, and wanted track end style dropouts.  I chose steel because it rides so nicely and track ends because of all the chain tensioning methods available at the time, I thought (and still think) it’s the best.  I think sliding dropouts are ugly (and heavy) and I didn’t want an eccentric bottom bracket because I’ve heard too many stories of them creaking a lot.  I also wanted the ability to put gears on if I wanted to.

The Jabberwocky fit the bill perfectly.  It’s not as light as higher priced options that use fancier steel, but it’s also a whole lot cheaper.  For example: the Niner SIR 9 weighs about half a pound less, but at the time cost almost twice as much.  I love the way this bike rides, and how I fit on it.  I do wish the chainstays were shorter, but the length is part of the comfort equation.  Vassago has been through some rough patches the last few years (they were out of business for a while) but the company is now under new ownership (some former Vassago-sponsored racers bought it) and will have frames available again soon.  They’ll be sending me one of the new made in the USA VerHauen frames to review in early January, so stay tuned to the blog for an On Test article as soon as it shows up!  Til then, you can check out their new website by clicking here.

When I first built the bike up I wanted a rigid fork to keep cost and weight down, and I liked the no-maintenance aspect of it.  I choose the White Brothers fork because it was one of the few carbon options at the time, and while more expensive than a rigid steel fork, it’s much lighter, and is still a lot less expensive than a nice suspension fork.  In theory the carbon would ride more comfortably than a steel fork too.  The bike has had two different suspension forks on it at various times, but I enjoy the rigid the most since it matches with the simplicity of the SS drivetrain nicely, and I like the handling with the shorter rigid fork…plus I like that it’s two pounds lighter than a nice suspension fork.

Wheels are another thing that have changed several times through the years on this bike.  The Fulcrums were review items I received (review here) and I like them a lot.  I have a lighter set of wheels, but choose to put them on my geared bike.

I like big front tires on this bike since the tires are my only suspension.  During the summer the bike wears a 2.55” WTB Weirwolf LT, but for the leafy and wet winter season I put some knobbier tires on for more grip.  I usually use a 2.4” Continental Mountain King during the winter, but I can’t get it seated tubeless on these UST rims.

Beautiful, strong, stiff, relatively light, and made in the USA.

Wide, strong, light, and a little bit of give for comfort.  This is a brand new product from Thomson, watch the blog for a review once I get some more miles on it.

I love Ergon grips.  For long rides they’re just so much more comfortable for me.  Even though I have weight weenie tendencies, I don’t mind the extra heft of these grips.

The last seatpost your bike will ever need.  Made in the USA, matches the stem.

I’ve had this saddle a long time, it came stock on the Anthem.  It’s narrow, long, and lightweight.  I’ve put thousands of miles on this thing, and it fits me well and is comfortable.  I wish they still made this saddle…sadly, it’s been discontinued.

These were freebies.  A friend bought a used bike and these were on it, he had better brakes he swapped on, so he let me have these when my Avid Elixers died.  I like them though, plenty of power, good modulation, and unlike the Avids – they’re quiet!

These cranks were on the Anthem where they originally replaced the stock RaceFace cranks.  I think they’re cool looking, and they’re about the same weight and price as Shimano XTs.  The chainring is SS-specific with wider teeth and no shift ramps, and made in a guy’s garage here in the USA.

It’s stainless steel so it lasts a long time, and it’s wide at the base so it doesn’t chew up the freehub body.

Stay tuned for more “Bikes of Singletracks” posts including the low down on my geared 29er.

Tell us about your bike with the new “My Bikes” feature in your Singletracks account.

Beginners
What is the Noisiest Part on Your Mountain Bike?
Repair
MTB Lube Theory: Which Oil or Grease Goes Where? We...
Advocacy
Trail Agents from Mountain Bike Orgs are Taking on the...
Subscribe
Login
Please login to comment
7 Comments
Most Voted
Newest Oldest
Inline Feedbacks
View all comments

Thanks for the Detail. Im working on a build for rigid that will be convert to a singlespeed.
“Fork: White Brothers Rock Solid Carbon” I like that it fits your bike perfectly if your in to Visual Aesthetics.
The fork is going to be my next purchase for the build and i may look in to this one if you dont mind.

I agree, there is so much beauty in simplicity.

Febuary marks a year for me and my fiance’ in regards to Mountain Biking and I want to thank you guys for supplimenting our passion. There is not a more important website on the net for me than singletracks.com and the work you guys do is inspiring.

So 12 bikes later, hundreds of miles, bumps bruises and scrapes, and nothing but pure joy through it all, i feel like i can now contribute to this community in a real manner. i was telling greg yesterday that i have plenty of trail data to contribute for my area (East Texas) i plan to get as much info to yall before we move in Febuary so i can feel like im doing my part for the Mountain Bikers and Future Mountain Bikers in our area.

Were moving to Boulder, Co 2/01/2013 so obviously were excited and i will do what i can for you guys there as well.

Cris – thank you man! What makes Singletracks great isn’t me and the other members of the blog team, it’s that we’re all a community. Thousands of users all contribute, on the forums, trail reviews, videos, photos, GPS data, product reviews, etc. Thanks for being part of the team!

You’re gonna love it in CO. Once you get used to the lack of air anyways haha!

We have plenty of air, it just doesn’t have much oxygen in it!

Cris, you’ll like it here. Good luck with your move.

You get tired just breathing in CO.

The Jabberwocky was my first taste of ss kool-aid, now I am an addict. Very glad to see the rebirth of Vassago.

This “Bikes of STracks” is Awesome! Look forward to seeing more! Have I missed any or is this the first one?

This was the first one Spartan!

Here’s something crazy…this post went live on Friday, and on Saturday someone recognized the bike out on the local trails! HA! Didn’t see that coming.