When I built upa secondbike recently I ran into a small problem: where was I going to put it? Between my two mountain bikes, my wife’s mountain bike, and my 1970ish RollFast, our garage was filling up. I already had a single bike stand, so I went shopping for a two bike stand, which I found at a national home improvement superstore – and it was cheaper than the single bike stand! Which one is better might surprise you. 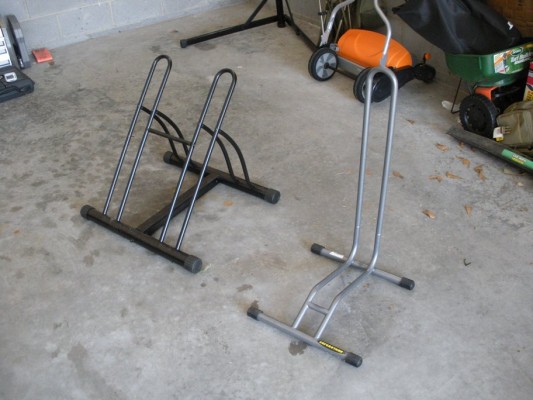 I found this stand at Lowes. It holds two bikes and retails for only $26.64. What a deal I thought! So I brought one home and put it together. Assembly was easy and it even comes with the two tools you’ll need – an allen and box wrench. You can assemble it so both bikes are on the same side, or on the opposite sides. Since garage space is at a premium I set it up so both bikes were on the same side and it only took me about 10 minutes to put together.

The plan was to use this stand for my wife’s 26″-wheeled hardtailand one of my29er hardtails. As soon as I put my wife’s bike in the stand I found a problem: the brake rotor hits the stand. Hmm…interesting. It still holds the bike up fine, but I was worried about bending the rotor, so I pulled the wife’s bike out. 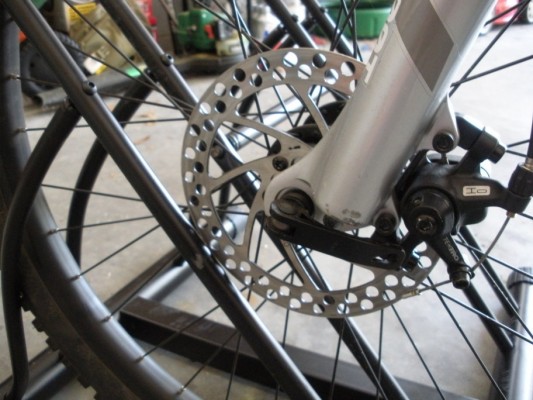 In goes one ofthe 29ers – and it fits, sorta. The big wheels barely fit far enough in the stand so they won’t come rolling back out again, and it’s not a very secure hold. But at least the brake rotor doesn’t hit! 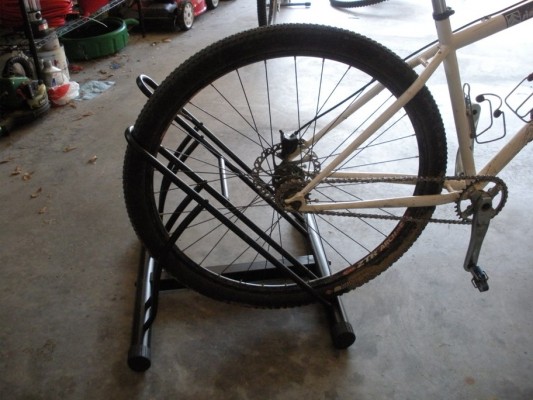 29er wheels keep the brake rotor off the stand, but they barely fit far enough into the stand to be secure.

Next I tried fitting both my29ers in the stand. And they did fit! Again, barely. Luckily one of my bikes is shorter than the other, so they just fit nestled in together…kinda looks like they’re cuddling with each other. It takes a little work to get them both in there, but once I figured it out I can do it pretty quickly. I tried making them face opposite directions, but the bars and seats interfered with one another. But hey, at least I was able to make it work! 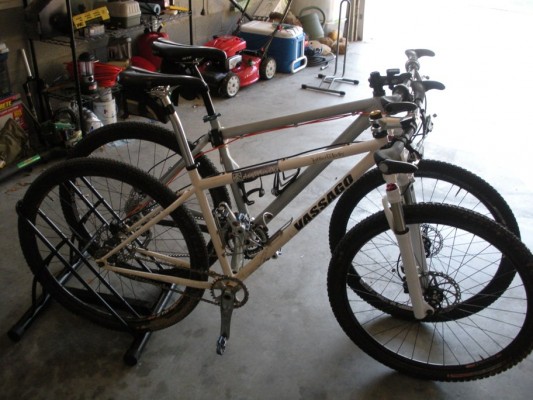 Aren’t they cute together??

I’ve had my Superstand for a few years now and I paid about $35 for it a local bike shop (they use a bunch of these themselves). I really like this stand. It’s so simple but there was obviously some thought put into its design because it works really well. It will hold any wheel size bike, 26″, 29″, and even 700c skinny-wheeled bikes. And it does so without hitting the brake rotors. 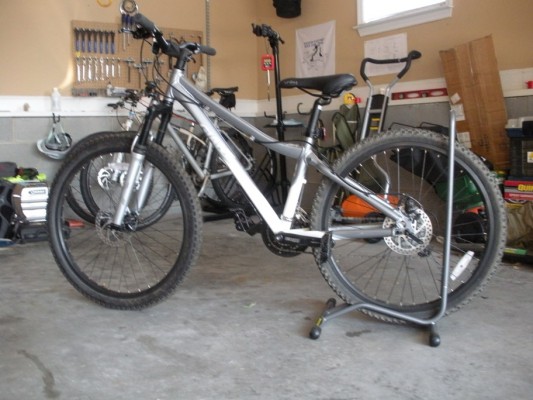 The Superstand will hold 26″ wheels without molesting the brake rotors. This is a good thing.

Another feature I like about the Superstand is that you can pull it apart easily and take with you. Stand on the base, give the vertical loop a tug, and off it comes. Toss it in the trunk and head off to the races. To put it back together you just push the loop back on. It’s bent “in” just enough to fit tight and stay when you want it to, but you can still pull it apart easily when you want. No tools necessary. According the Willworx website there are also some multi-bike Superstands available – wish I had known that before I bought the ProStor… 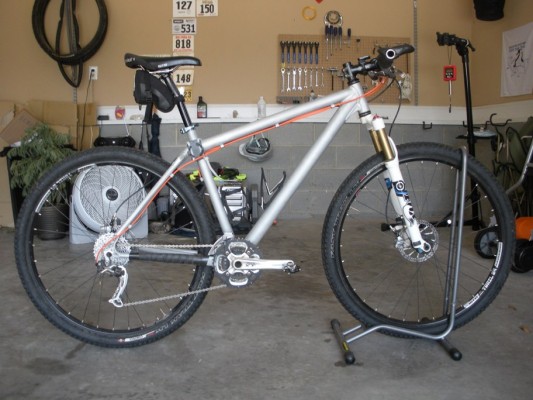 Even 29er wheels fit all the way into the Superstand for a very secure hold.

The one area I might complain about the Superstand is its width – big, wide tires are a tight fit. But you can make it work – I’vefit a 2.4″ Continental Mountain King and a2.55″ WTB Weirwolf LT in it. Makes it a little more difficult to pull the bike out, but at least it wont come out unexpectedly.

The ProStor stand kinda works okay for some bikes, the price is right, and it’s easy to get. If you’re interested in getting one head to your local Lowes or check it out on their website right here. If you like the portability and versatility of the Superstand then head over to the Willworx website for all the details.

I had no idea Lowes sold bike stands.

I’ve never owned a floor stand like either of these but for a while I was storing our bikes on two of those wall-mounted deals. Of course wall-mounted units are more expensive, they require you to lift the bike over your head to reach the top rack, and they won’t work with tight frame triangles like the one on mudhunny’s FS, size XS rig. They’re also not portable unless you’re taking your bike somewhere with wall access. 🙂 But there are advantages: more floor space, fits any wheel size, and lets you show off your bike like a piece of art on the wall.

Crown bolt storage hooks are a super cheap and easily removed option if you want to hang your bikes. About $6 at Home Depot and they make a rubber coated version that won’t scratch your rims. The only problem is that you need to find a wall stud to screw them into. Luckily, 2x4s are usually spaced at either 16 inches or 24 inches apart in homes and apartments. It’s the perfect spacing for bikes when you alternate front and rear wheels on the hooks. One simple hook at a foot above eye level and you can hang your bike vertically from the wheel. I have four in my garage hanging this way with out losing much usable floor space. $25 of cost up front for the four hooks and 10 minutes with a drill and stud finder was all it took.

i dont have a garage so my bikes are parked around the kitchen table. lol

@BikerPanda – LOL, I did the same thing for a while.

+1 for the rubberized hooks. And no, it hasn’t made my hydraulic disc brakes leak.

Nice thing about the floor stands vs the hooks is portability. And they work pretty well as a repair stand in a pinch, depending on what part of the bike you’re working on.

We hang our bikes upside down (hooks in ceiling) by the tires. Is this not a good idea for mt bikes? I cleaned one of the mt bikes and it had a lot of grease on the frame around the shocks, maybe they leak when upside down?

They work great – fits the MTB tire (26 & 29) – no brake interference – foldup nicely for traveling. Heavy and sturdy. Saw them in use at my LBS.

Shop around for the best price…….

@VJ – you found the reason I don’t hang my bikes. There is oil in the front fork and read shock, and when the bike is upside down the oil runs “up” the fork to the seals. If they aren’t in perfect condition, the oil leaks out.

i don’t have a garage i have a shed from Lowes and it exposed 2x4s and i prop my road bike against it and squeeze the commuter or the mountain between it and the wall and the other bike is perpendicular and leaning against other stuff.

@Dustin Gaddis – Thanks for the nice write up. Went out to Lowes and picked up the ProStor one. Went together easily and works great. My wife and I have 4 kids…we have 9 bikes in the garage…this will help!

[…] folding models that are on the market. If cost is an issue, you could use a storage stand (like one of these two I reviewed recently). You can also just flip the bike upside down on the seat and […]