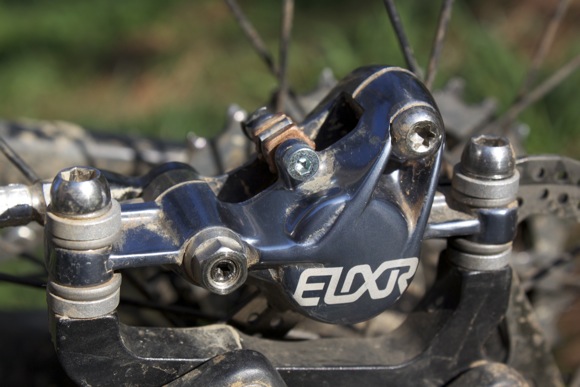 The new Elixir 9 hydraulic disc brakes from Avid feature a completely re-worked TaperBore design and other refinements that make for a smooth, solid package for your MTB stopping pleasure. I’ve been running the Elixir 9s on my Santa Cruz Tallboy for more than 3 months now and I have to say I really love these brakes.

One of the first things you’ll notice looking at these brakes is the sleek, simple profile of the levers and calipers. Clearly Avid/SRAM has been designing MTB braking systems for a long time and that refinement really shows in the Elixir 9s. The levers are MatchMaker compatible so you can tuck them in with compatible SRAM shifters and even RockShox lockouts for a neat bar set-up, especially on narrow bars where real estate is at a premium. 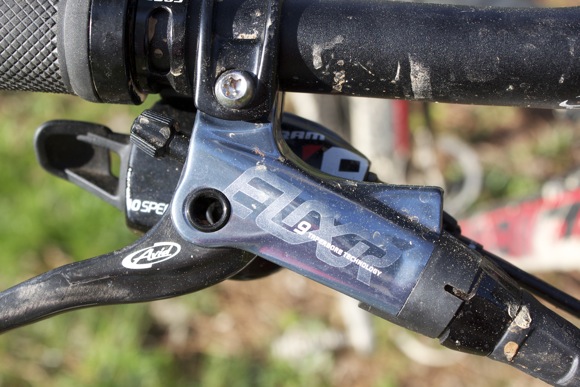 In terms of appearance, the Elixir 9s look similar to the X0 brakes I’m running on my hardtail, which isn’t a surprise since the X-line of SRAM brakes are descendents of the Elixirs. Weighing in at 358 grams (with optional carbon levers), this is a lightweight brake system, though not quite as lightweight as the X0 brakes.

Like other brakes in the Avid/SRAM line, the Elixir 9s feature the tri-align caliper positioning system (CPS) which works great in my experience. To align the calipers, just spin the wheel, clamp down on the levers, and tighten the bolt stack. Installing these brakes was one of the easiest and most enjoyable parts of my entire bike build. 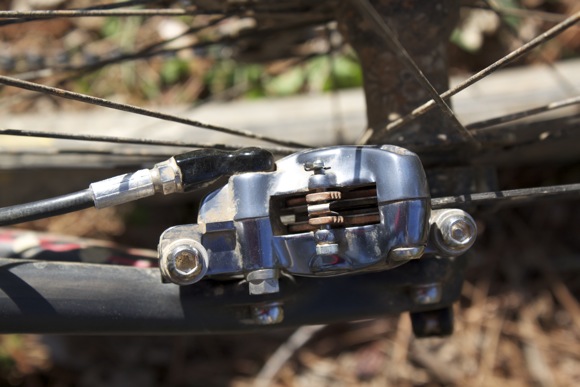 The Elixir 9s also feature top-loading sintered pads like most modern MTB brake systems, though they’re not quite tool-free like some on the market. I recently replaced the pads on my X0 brakes which use the same design and pads and the process was pretty simple. The most difficult thing is getting the pistons back in place – this is not something I’d want to try to do out on the trail.

Don’t let the simple exterior on the Elixir 9s fool you into thinking these aren’t full-featured brakes. The Elixir 9s offer tool-free reach and contact point adjustment right at the levers, making it easy to dial in to your preferences quickly. Reach adjustment moves the levers closer or further away from your bars so you get the right position whether you have short or long fingers.

I’ve heard some riders complain about the modulation on Avid/SRAM brakes in the past – to some they felt on or off with no play in between. That’s not an issue with the Elixir 9s – contact point adjustment lets you dial in the degree of modulation available. If you want instant power, just set the levers for a short throw. A longer throw produces deep modulation.To be clear, contact point adjustment doesn’t change the position of the pads relative to the rotors (much to the frustration of anyone who has tried replacing their brake pads).

Digging deeper into the technology inside the Elixir 9s, these brakes feature updated TaperBore Technology with an improved bladder that promises to reduce air entrapment inside the master cylinder. The upshot is easier and less frequent bleeds (I haven’t needed to do this yet but will keep you posted if/when I do). 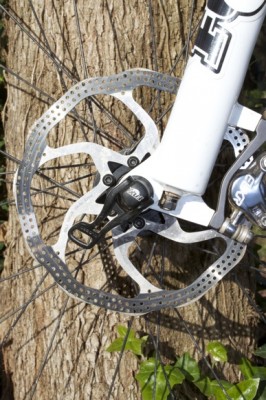 The included HS1 cross-drilled rotors are lightweight and whisper quiet on the trail, especially compared to the previous-generation rotors included with my X0 brakes. For my tests I’ve been running a 180mm rotor up front, 160mm in the back.

All that technical stuff is great (when I can understand it) but I love these brakes because they just feel good starting at the levers. Avid features what they call “Power Reserve Geometry” in their lever design which is really just a marketing term for “comfortable, natural-feeling levers that provide a ton of force.” These brakes also have a nice, positive spring-back when you release the levers and single-finger operation worked flawlessly for me.

On the trail, the Elixir 9s are crisp and provide consistent modulation right out of the box. I didn’t feel like I needed any time to get a feel for these brakes – they were dialed in just right for aggressive XC-riding. With the 180mm rotor up front, the Elixir 9s provided more than enough stopping power for my big 29er wheels, even on steep slopes.

Despite trying to baby my new bike in the first few months, I’ve been riding in some pretty cruddy conditions training for the Cohutta 100 – mud, rain, sand – and for many hours at a time. The Elixir pads have held up well, even after last week’s approximate re-enactment of the 2010 Fool’s Gold course where riders reported blowing through multiple sets of brake pads due to the wet and gritty trail conditions.

Complaints? Honestly I don’t have any – just a couple ideas for ways SRAM could make MY life easier (though not everyone may agree). First, the hydraulic cables are ridiculously long out of the box. Yes, I know it’s possible (anddesirable) to shorten the cables but the hassle of bleeding, re-connecting, etc. just doesn’t seem worth it. My bike is an XL 29er and while I know there are longer bikes out there (i.e. those with more travel, tandems?) I’m pretty sure shortening the rear brake cable 3 inches or so will still work for the vast majority of the bikes on the market.

Second, I’d love to see an easy method for retracting the pistons that doesn’t involve jamming a flathead screwdriver into the calipers. I alluded to this earlier when I talked about replacing the pads but this also comes into play when someone accidentally squeezes the levers when there’s no wheel attached. Mechanically speaking I don’t know if this is possible but it would be a great feature to see.

Oh, and one final nitpick: the Elixir levers use a Torx bolt on the bar clamp instead of an allen head. Not that it matters anymore – Torx is showing up everywhere on the bike these days (much to my personal frustration).

Thanks to the folks at SRAM for providing these brakes for review.

The brakes should have shipped with a plastic separator in each caliper. You can toss one of these into your pack to use when the calipers need to be pushed back out on the trail. If you didn’t happen to keep those, a Pedros plastic tire lever works perfectly.

I don’t know what size torx you need, but the Crank Bros Multi-17 tool has a t-25. (fits brake rotor bolts)

The uber long brake hose thing bugs me too. Maybe they could start offering pre-packaged brake sets in 4 sizes instead of the current 2 sizes?

Yeah, the plastic things are ok but in my experience they don’t do the job for swapping out pads which requires the pistons to be completely flush. Most multi-tools (mine included) do have a T-25 tool but if bikes only used allen heads we could get away with smaller multi-tools. 🙂

…or only used torx

The supplied plastic tool should do the job. The trick is that you can rock it side to side to get the pistons is further in.

According to Avid, the hoses have to be long enough for a bike that routes the hose down below the BB and to the brake. So this is also why they supply a spare end so that you can trim them to the length you want.