I love finding unusual MTB products at Interbike and this year, there was even a whole section of the show in the basement called “The Lab” where many new companies showed off their creations. Here are a few items from the show that just might blow your mind (or maybe cause you to scratch your head.)

If you’ve ever ridden with me then you’ve probably heard me rant about both tubed and tubeless tires. I get frustrated with both, though it’s not really their fault–air just doesn’t want to stay inside a tire! One day I plan to run some experiments in my own “lab” involving Great Stuff and/or pool noodles but then again, these guys might have beat me to the punch. 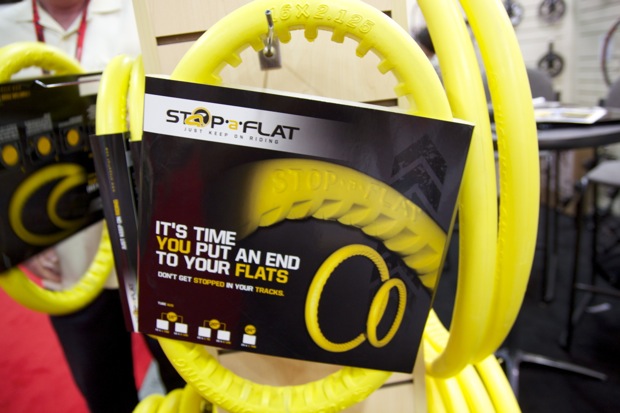 Stop-a-Flat is a solid tire insert that promises to “put an end to your flats,” and it couldn’t be more simple. To be fair, the product is designed for low impact uses–kids’ bikes, jogging strollers, and the like–but the company recently rolled out their first 26″ version this year.

Installation could be a little tricky and again, these aren’t designed for high performance (read: mountain biking) applications, but I definitely see some possibility here. By adjusting the materials properties, it should be possible to tune the firmness and rebound characteristics to achieve something usable. Who else wants something like this? 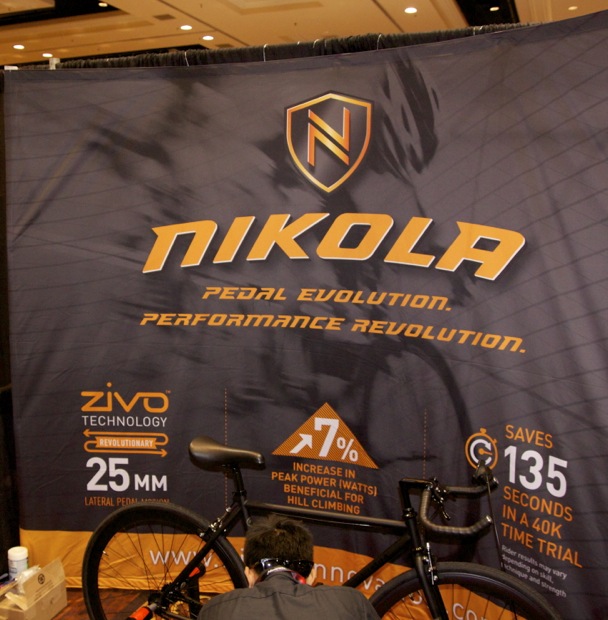 This one is a bit hard to explain but here goes: the Nikola pedal is designed to move laterally, in and out along the spindle as the pedal rotates. The inventor came up with the design after experiencing knee problems as a cyclist and the company’s own tests seem to indicate that riders are able to eek out a few extra percentage points of efficiency using the pedal.

The company is working on an SPD version of this road pedal, and I got a chance to hop aboard a bike set up on a trainer with the pedals installed. The motion actually didn’t feel as strange as I thought it would, though I wasn’t clipped in at the time which probably would have made the motion more noticeable. 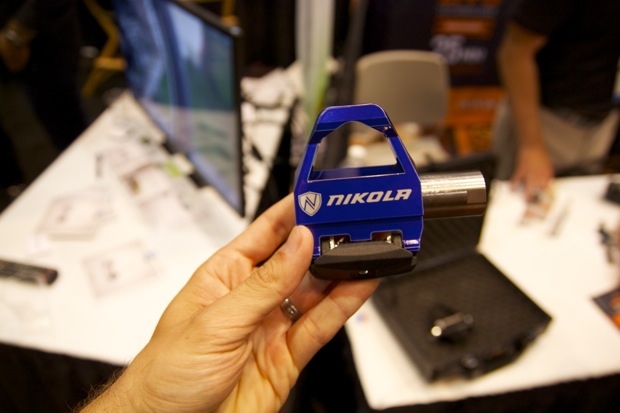 When I first saw this pedal (and before I knew it was designed for comfort/performance reasons), my immediate thought was that this could be to mountain bikes what telemark skis are to downhill skiers. Imagine rolling down a flow trail and sliding side to side on your pedals in full attack position as the bike holds its line on the trail. Or perhaps a more apt comparison would be to rollerblading?

Either way, this isn’t how these pedals even work; the in-and-out motion is actually fixed to the pedal rotation, not to how the bike is leaning. Still, it will be interesting to see how/if this takes off. 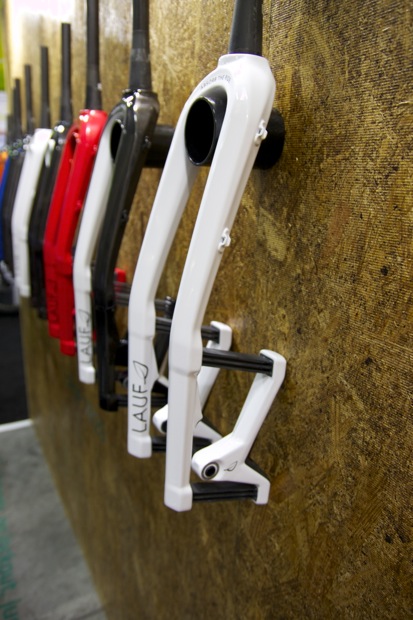 You may have seen the Lauf suspension fork already, but this was my first time experiencing it in person and man, is it far out! Jim was really into the Lauf Trail Racer and to be honest, I’m kinda curious myself. It’s the lightest “suspension” fork design around, and for good reason: the whole thing is basically constructed of carbon fiber and composite materials. There are no moving parts, but press down on the fork and it bounces sorta like an air-sprung fork. Travel: 60mm and just 990 grams heavy. 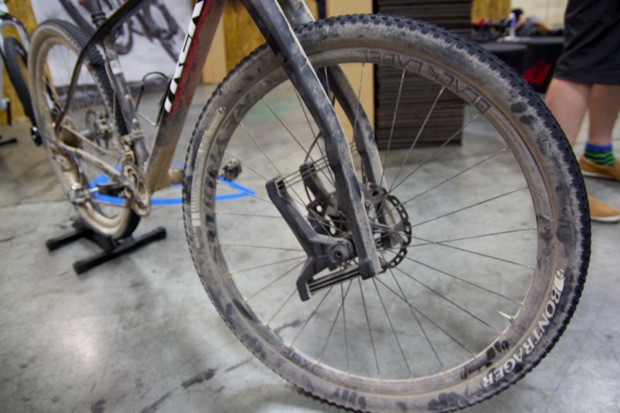 The composite “springstacks” as the company calls them feel rigid when you squeeze them laterally but pivot and rebound in response to downward pressure. I really want to test one of these on the trail to see how it compares to a real suspension fork. Based on what I could tell at the show it seems very promising… 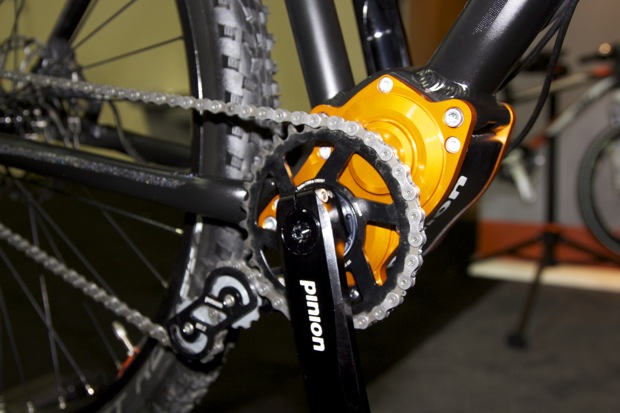 We spotted the Pinion P1.18 gearbox on a KTM mountain bike and weren’t sure which was more interesting: the Pinion itself or the fact that KTM (the Austrian motorcycle company) is selling mountain bikes in the USA for the first time! For now we’ll focus on the Pinion, but look for info on the KTM fat bike in a future article. 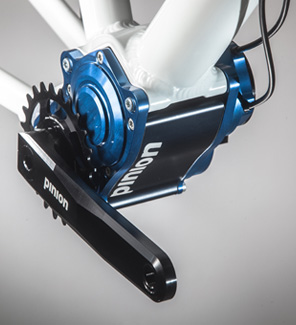 The Pinion offers 18 gears that are equally spaced in 11.5% steps for a mind-blowing 636% overall gear ratio, which the company claims is more than any other MTB system on the market. This basically means you not only get a granny gear but also a great, great granny gear. Honestly I’d probably have a hard time even balancing the bike while pedaling the easiest gear!

One of the interesting things about this particular internally geared hub system is that it’s located in the crank area as opposed to the rear hub. This places the weight of the system close to the bike’s center of gravity but it also means the frame basically has to be designed around the drivetrain. KTM appears to be the first company to offer a Pinion-based mountain bike in the USA, but I wouldn’t be surprised to see others pop up in the future.

Maintenance is said to be a breeze and essentially involves the equivalent of changing the oil on a car (drain the mineral oil and replace). The transmission is said to last 60,000km–37,000 miles! 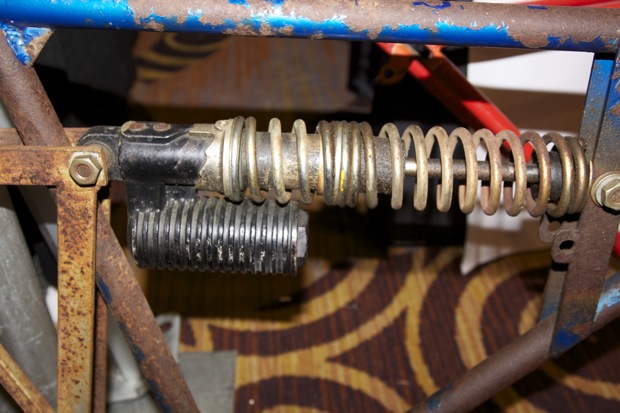 Ok, so this is retro-weird, but I thought I’d share here anyway. Check out this early rear-suspension mountain bike design (note: it’s not FS since the front fork is rigid!). It’s hard to imagine that shock is even functional–it almost looks like everything but the spring was just thrown on there for looks!

This frame was spotted at the Mountain Bike Hall of Fame booth where I got a chance to chat extensively with Marc Vendetti, one of the first mountain bikers who regularly rode Mount Tamalpais with buddies Joe Breeze and Otis Guy in the early 1970s. Incredible to see how far the tech has come, but one thing hasn’t changed: mountain bikers are still the best people in the world to hang out with!

That Pinion drivetrain actually looks pretty sweet! I wonder if they’ll be able to work it into a full suspension frame?

Hey Greg, Nicolai has been making Pinion equipped FS bikes for a while…check out this bad boy http://fstatic1.mtb-news.de/img/photos/1/_/large/Pinion_Nicolai20von34.jpg

I would love to see more companies go this route!

Also, KTM bicycles and Moto are separate companies. Kind of how Fox Suspension and Fox head are separate now….at least that’s how I understand it.

It’s possible KTM bicycles and moto are separate legal entities but for now, you can only buy the bicycles at KTM motorcycle dealerships in the USA. They were at Interbike trolling for bike shops to carry their line. 🙂

RE: Pinion Drivetrain “This basically means you not only get a granny gear but also a great, great granny gear.”

It’s kind of like the shaft drive bikes but everything is up front. Lot less parts, weight, and maintenance. Much better ride I would think. The shaft sends recoil into your legs as to the Pinion Drivetrain using the chain which absorbs that recoil. I like how you think Greg. Full Suspension would just be over the top sick.

All right Jeff, you were right. They had a 26″ version of the stop a flat thingy. We gotta get one of those and compare it to a pool noodle.