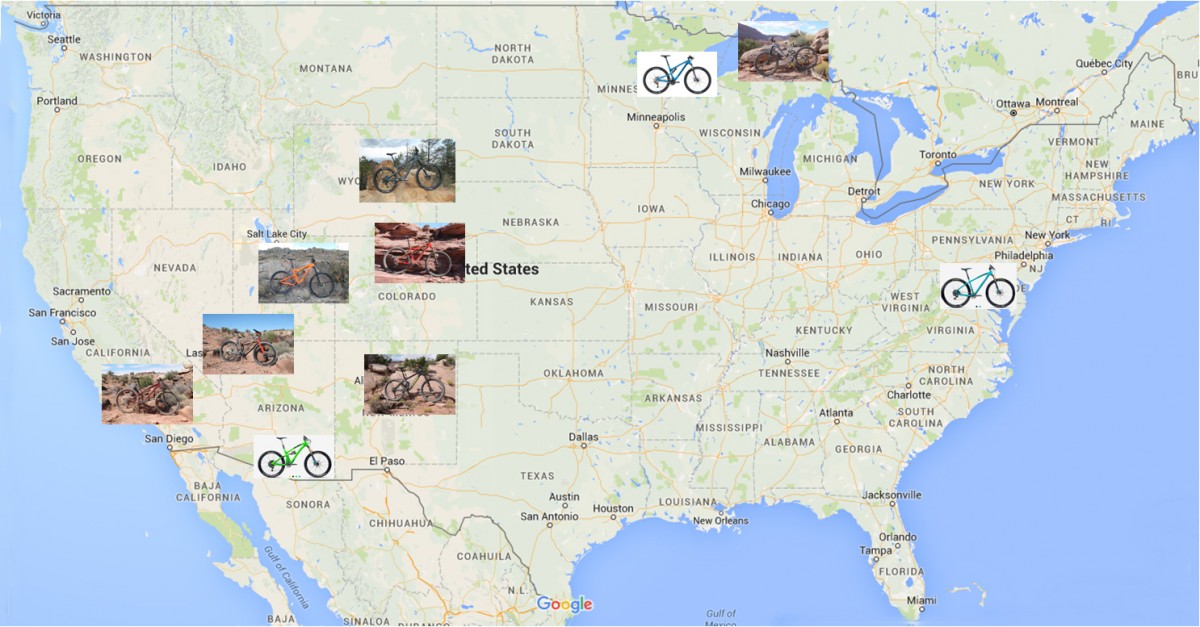 2015 was an amazing year in many ways, but especially in the world of mountain bikes.  Over the course of the year, I got to put in double-digit miles on almost two dozen marvelous new bikes, not a dog in the bunch, and most of which I’d be happy to ride on just about any trail you put in front of me.

The marvel of most of today’s bikes is the broad range of capability they have relative to bike of a few years ago. Even so, no matter how wide the performance spectrum of a bike may be, most often when I try a bike for the first time, the bike talks to me. As we get to know each other, the bike communicates many things to me, among them the trail that is perfect for that bike.  The bike reaches into my brain and says, “You think you’re having fun now?  Take me to ______!”

What follows is a list of my 10 favorite bikes of 2015, and which trail they directed me to–the trail that fully exploits that bike’s unique characteristics.

The Supercell is the most perfectly balanced, neutral, and instantly comfortable ride, and it was quick to let me know that it would be the perfect bike for a downright fun trail system that has a little bit of everything.  The Idyllwild trail system features climbs, descents, loose rock, embedded rock gardens, ledges, small hucks, tight corners around huge ponderosas, and wide-open meadows with little in the way of transitions between them.  The Supercell is perfectly suited to managing these transitions and grinning over every feature between them.

The Mixer was my runaway number one bike of the year.  I would be thrilled to ride it on anything this side of pavement.  But about halfway through my first ride, I learned that not only did I have to get a Mixer, I had to take it directly to the mighty Porc without passing
“Go” or collecting $200.  The Mixer is the best handling, most bombproof, and “make the rider feel 10 feet tall and bulletproof” bike in the world, especially when pointed down.  So why the traditional Porcupine Rim rather than the Whole Enchilada? Because the Mixer is the one and only enduro rig which doesn’t suffer from the dreaded crank bang on technical climbs, so it would be a shame to pass on that relentlessly-ledgy first four uphill miles of the original route.

When I visited Copper Harbor this summer, it had been drizzling steadily all day, and continued to do so throughout my ride.  The good news is that the trails at Copper Harbor are exceptionally well designed and laid out, and the native surface drains very well, so I could still ride without causing trail damage.  The bad news is that all that moisture had coated everything in sight and, when mixed with the local dirt and moss, had taken on the consistency of Vaseline, making each rock roller and wooden ramp a treacherous death trap. So I refrained from hucking the ramps, and gingerly slid my way around the big rollers.  During Outerbike as I hit rock rollers three months later on the Knolly Warden, I knew that, not only did I need to go back to Copper Harbor, I needed to do it on the Warden, whose rugged frame and bottomless suspension would launch and sail me en route to many happy landings.

In the interest of full disclosure, I have to admit that the Pine Mountain didn’t actually tell me to take it to a specific trail. It said that it wanted me to ride it on every trail! The retro rigid plus-size rig dearly wanted me to throw it around in throwback fashion on each and every trail I’d ever been on.  If I had to choose one, it would be a trail with a little bit of everything. The combination of these three trails gives the rider ledges, wide-open flow, and a good dose of sand where those plus-sized tires will come in handy.

The Occam is a wonderfully light trail companion that is perfectly suited to all day excursions over variable terrain with lots of ups and downs.  The Wyoming Trail and connecting routes running from near Rabbit Ears Pass to Buffalo Pass in the Rockies high above Steamboat Springs offer endless miles of high altitude singletrack bliss.  The Occam TR M-LTD let me know that not only would it save me fatigue over the course of these ups and downs with occasional rock gardens, but that it would also be happy to coax me home late in the day when my legs would otherwise refuse to participate in the final climb.

Since its inception, the Rocky Mountain Element has been their flagship cross country full susser.  Even though it is a race rig, it handles rocky terrain like a great trail bike.  When I rode these two connected trail systems, the Element called to me from my demo day three months earlier and said, “Don’t you wish you were riding me right now?”  Indeed I did.  The Element would be perfect for flying through Brewer Park without getting disturbed by any of the rock features and subsequently connecting to the tight woods and rock gardens of the Piedmont trail system. 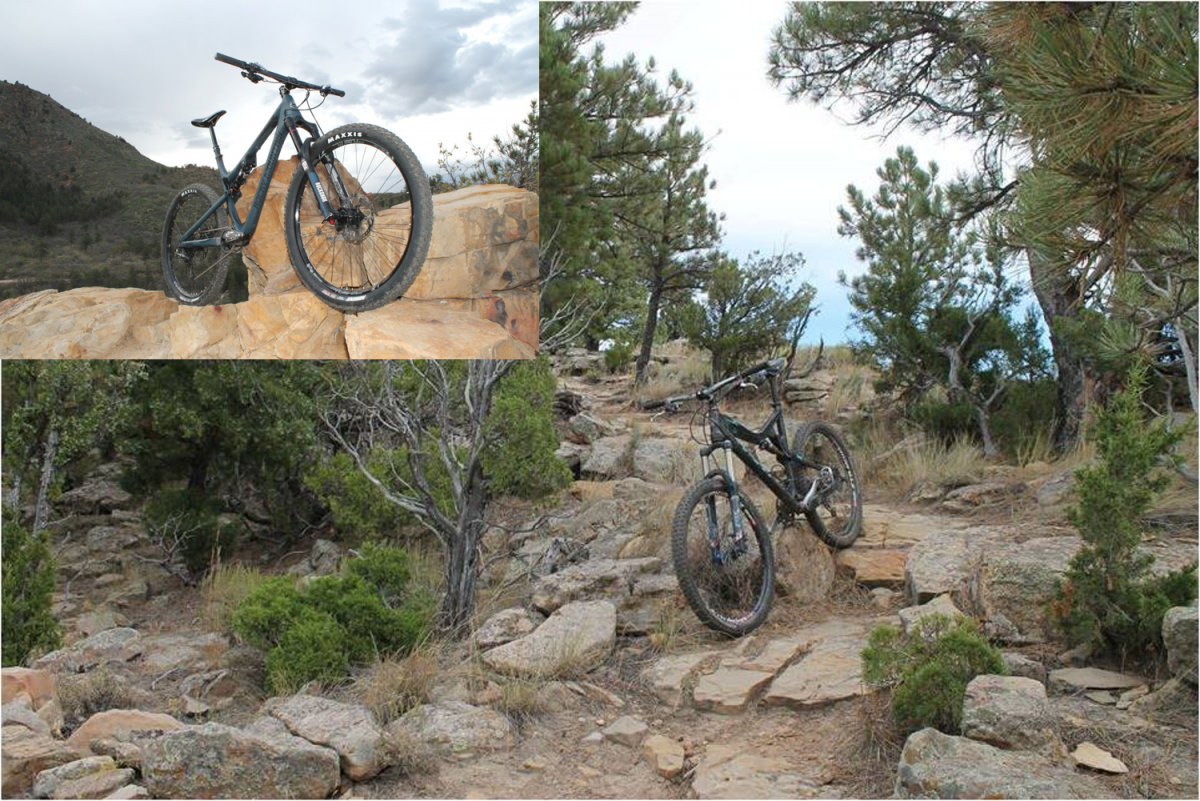 Despite being out on the prairie, Glendo State Park is covered in chunk, which screams for a competent trail bike.  While there aren’t the multi-thousand-foot climbs and descents of the nearby mountains, there are lots of shorter climbs and descents, one after the other, all punctuated with ledges and tricky rock gardens–the type of which the highly-maneuverable and light-yet-sturdy Thunderbolt BC Edition excels at.

Over the course of 22 miles, the South Boundary trail throws a lot at the rider.  There is an initial tough climb over loose baby heads followed by miles of fast, flowing traverse and ending with a half-mile vertical plunge over square edged rocks on an extreme tilt.  The RFX told me right away that its ultra stiff, lightweight frame would help me up the climb and through many miles of bench cut aspens before carrying me smoothly down the final hunk o’ chunk.

Although not really a racer, when I lived in the DC area I raced to make mountain biking more interesting in the absence of the great gnar I was used to out West.  The course at Greenbriar State Park proved to be rockier than most in the area, which gave me a relative advantage.  On the rockiest  part of the climb I would leapfrog riders who dismounted, only to be retaken over the less technical areas.  The ARC, which is incredibly adept in the chunk for a hardtail, also told me that its light weight, rigid frame, and ability to carry momentum through anything would have improved my race rank by at least a half-dozen places.  I was forced to agree.

La MIlagrosa  finishes with over 2,000 vertical feet of gnarly plummet, but even though this is a shuttle run, there’s a good deal of work involved in getting to the payoff.  The initial climb is mostly hike-a-bike for most people, but the SB-6c was quick to tell me that, if I wanted to have any chance of making the climb on an enduro bike, this was it.  Of course the SB-6c was also quick to let me know it would smoothly carry me over each and every obstacle on the way down while threading the narrow spaces between about a half-dozen species of very cranky cacti.

Your Turn:  Have you ever been on a bike that was just perfectly-matched for a particular trail?