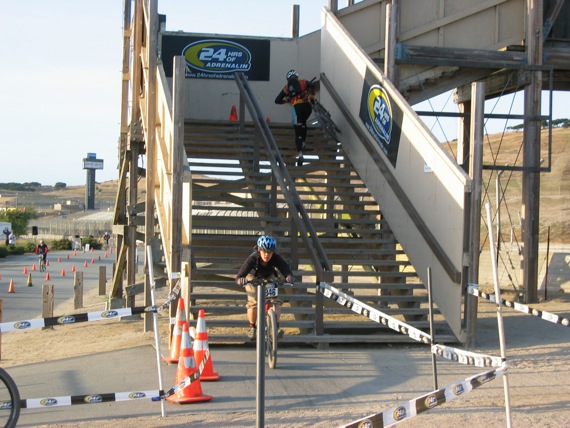 If you’re thinking about competing in a 24 hour mountain bike race this year, you might be surprised to find how limited your options are. With two of the biggest promoters of 24 hour races, Granny Gear and 24 Hours of Adrenaline, scaling back in 2010, many long running races just aren’t happening this year. We were curious to find out why this is happening and based on our research, here are some possible factors.

1. The bad economy has dried up demand for 24 hour mountain bike races. According to the folks at Granny Gear, sponsorships were hard to come by this year despite climbing expenses from last year’s races (read this letter from the race director at Granny Gear). This could be because bike companies are shifting their promotional dollars to online marketing efforts and sponsorships and away from big events – but we just don’t know.

At the other end of the equation, racers are feeling the pinch as well and paying $100-200 for a race is tough to swallow in this economy. Some participants in last year’s 24 Hours of Nine Mile blame steep price increases for low attendance so clearly something has to give. I’m no economist but it would seem the cost of hosting 24 hour races is on the rise – otherwise someone would be getting rich…

2. Environmental concerns are shutting 24 hour races out. We actually have very little to back up this claim but this could play into the cost increases mentioned in #1. Allowing hundreds (if not thousands) of riders to ride a 10-12 mile loop for 24 hours straight is pretty much a trail maintenance nightmare. Many races happen rain or shine and organizers are often on the hook for returning the trail back to its original condition afterward. Trash clean-up is the easy part – get out your McCloud!

3. The logistics are just too difficult for volunteers to handle. Here’s a note from the Montezuma’s Revenge race directors, a race that was held for 21 years before bowing out in 2008:

It is with great regret that we are further postponing this event until further notice. Due to some unfortunate staffing issues along with numerous logistical roadblocks we have decided to hold off on the 22nd annual event.

Since there’s no money in hosting 24 hour mountain bike races, volunteers are forced to take the reigns which can be a BIG job, even for folks with experience. The burnout rate for volunteer race directors isn’t surprising since organizing a single race can quickly become a full time gig.

4. Longer format, individual pursuits are becoming more popular. One bit of irony may be that 24 hour racing just isn’t extreme enough anymore. The film 24 Solo showed the world that riders like Chris Eatough and Tinker Juarez could complete a 24 hour bike race by themselves and weekend warriors started looking for the same kind of personal endurance test.

Of course we aren’t all racing 24 hours solo but more and more individuals are tackling 6 and 12 hour races on their own. Dirty centuries like the Leadville 100 are becoming the sport’s “marathon” where individuals can test their limits. Since 24 hour races are often team affairs they may have lost their allure for some riders which is kinda sad.

We’ve also noted a bit of an uptick in MTB stage racing over the past year or two. Stage races allow riders to experience diverse terrain and are often raced on an individual, rather than team, basis. These races may address some of the environmental concerns yet still include many of the social aspects of 24 hour racing (you know, beer at the campground at night).

The good news for now is that 24 hour mountain bike racing isn’t dead! We counted at least six 24 hour races in the US on our MTB race calendar and even a 25 hour (daylight savings baby!). Most of this year’s canceled races promise to be back next year and for that we’re crossing our fingers…

One final note: 24 hour racing seems to remain strong in places outside the US including Canada, Europe, and Australia (where the 24 Solo World Championships are being held this year). This could point to a cultural factor causing the decline here in the states (see #4).

This is sad indeed. I was hoping to do a 24hr on a team this year, but it doesn’t look like it’s going to happen. We are going to do a few 12hr races though.

I just submitted another race in AK for the end of June. Its a bit far to travel just for a weekend race, but hey if you happen to be in the state come on out and hang with us!

I am pretty amazed after seeing what went into putting on the 24 hours on the old pueblo here in Tucson. Its no woonder they are scaling back. Hopefully the economy and allt he other issues will slowly turn around and point towards more races held in the future-

Thanks for adding that one AK_Dan, we also just found out about the Coolest 24 in Cool, CA this May. Counting the Old Pueblo, that’s 9 races in 2010!

Thats a great little town, not more than a wide spot in the road really. If I could find something to do for a living there Id move just for the address – Cool, CA

Personally, I’ve scaled back on some of the races as well due to cost. I’m only doing one 9hr and potentially one 12hr. But it doesn’t take an organized event to grab some friends, schedule the time, meet at the trailhead and go all out for 6 hours or so. Nobody should let the decline in sponsored or organized races stop the adrenaline!

Not sure that it is truly dying, just did the 24 hrs of Spokane and they had their most entrants ever, over 700 riders. Good times we’re had by all!