Mountain biking is a playground for this thing we call life. In the same way that kids learn social and physical skills on the playground, learning how to interact and work with, or compete against, their peers, mountain biking hones our skillset–both physical and mental–ever more sharply.

What makes a ride “epic”? I probably need to write another English nerd column on that term. But in short, oftentimes we call the rides where everything goes wrong and we are faced with seemingly insurmountable challenges, “epic.”

Take, for example, a catastrophic mechanical failure that can’t be fixed on the trail, like shattering a derailleur on a rock. How do you respond to this problem? Do you sit and cry, and call Search and Rescue for evac? Do you take your derailleur and chain off and coast/hike out? Or do you break your chain and fashion a singlespeed drivetrain to allow you to still pedal your bike?

While there are certain problem-solving techniques that you can use to overcome obstacles, sometimes even your best attempts at fixing the problem still fail. Take the ghetto singlespeed example above. This is often used as a bit of sage advice on how to make it out of the woods in a pinch. It’s been passed down through the ages, from the early days of our sport. And you know what? It doesn’t really work with a full suspension mountain bike. If you don’t have some sort of device to tension the chain, as your suspension compresses and your rear wheel moves, your chain will pop off the perfect gear ratio that you have it in, falling off the cassette.

Sometimes, despite our best attempts, we fail. And in those moments, we realize that we are hopelessly out of control.

Acknowledging that we are out of control in many areas of our lives is, I think, a crucial realization. It is a critical step in understanding and accurately interpreting the world around us. Yet to some people, being “out of control” is a dirty phrase. They do their damnedest to control and manage everything in their lives, yet ultimately, they fail. 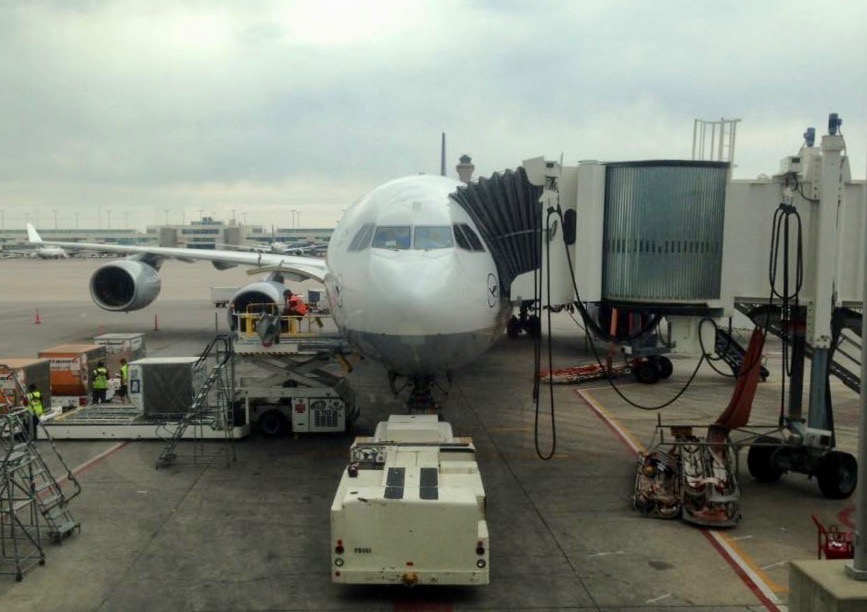 If there is one place that should be mundane, ho-hum, and boring–but isn’t–it’s the airport. Over 8 million people fly every day. It’s not extraordinary. It’s just what we do in 2017.

Yet how often have you walked through the airport and seen people stressed out over a delayed flight, a missed connection, or worse, a flight that’s been completely canceled? Probably every single time that you’ve been to an airport.

Because they’re upset, these stressed out people fret, complain, and harass the gate attendant, demanding an answer, demanding a solution. But what they still haven’t admitted to themselves at that point in time is that they are utterly out of control in the situation, and there may be nothing to be done.

Not being able to do anything to fix the situation feels like death when you’re not used to it.

I’ve learned over the years when to push for answers (“How about you route me through this other city instead?”) and when to just sit back and let events at the airport unfold. As I’ve observed other flyers exhibiting some serious stress, I thought that perhaps the stressed people at the airport were the unexperienced travelers, those who hadn’t learned that flights get delayed or canceled all the time. But as I continued to people watch, I learned that wasn’t necessarily the case.

Many of the most stressed are experienced flyers, Type A business people who are used to being in control. They fly first class, and they are flying because they have somewhere “important” to be. They’re in control, and they want people to know it.

Except when they aren’t.

When they’re at the airport, they’re utterly at the mercy of the airlines. And when their flight gets grounded on the tarmac due to weather, they are completely and utterly helpless. It doesn’t matter if you’re a doctor, a lawyer, or a politician. If the flight is grounded, you aren’t going anywhere.

But thankfully for those of us that rides mountain bikes, especially rides that qualify as “epic,” we get accustomed to being out of control, and we learn to cope mentally with the unexpected and the unpredictable.

You might have dinner plans set for a certain time, but if you flat once and put a tube in, flat twice and find you’ve forgotten your patch kit, you’re walking home–and if you don’t have cell service, there’s nothing that can allow you to make that dinner date.

Thankfully the more often that we’re put in these types of situations, where we are absolutely out of control, where there’s nothing that can be done to change our circumstances, we slowly become acclimatized to that feeling. We also begin to see the world accurately, and see that even though we may be totally out of control, even though things aren’t going according to our plans, that our lives haven’t fallen apart. Life goes on. Good things still happen.

As you begin to sit in that discomfort and embrace the present moment, you’ll stop and enjoy the sunset as you hike out with your bike and your flat tire… until you remember that you don’t have a headlamp, either.

Gear
Joining the Jorts Revolution: A Review of Handup and Ripton...
Gear
Singletracks Jerseys On Sale + Up to 50% Off Other...
Gear
Do You Wear Bike-Specific Baggy Shorts for MTB?
Gear
Trek Roscoe Hardtail Gets More Hardcore, Completes Start at $1,699
Subscribe
Login
Please login to comment
3 Comments
Most Voted
Newest Oldest
Inline Feedbacks
View all comments

One of the biggest differences between American culture and third world cultures is that many ordinary Americans try to control nearly every detail of their lives (and even the details of other people’s lives), while many ordinary persons in third world countries do not. Managing is a great skill to have in life. Knowing what you should manage and what you should not is also of great value. As the country song says, “Free and easy down the road I go.”

Good article, gives me some things to think about.

But right now I want to talk about the obvious-in-retrospect thing I just learned: You can’t single-speed a dual-suspension bike if you toast your derailleur.

Does it work if you lock out the suspension? I’d guess not, because “locked” isn’t really locked, and there’s still the blow-off valve lurking there.

What happens if you try anyways? Do you snap the chain when you hit a big bump, or are you just going to continually drop the chain? Can you lock the rear shock and make some progress, periodically stopping to mess with the chain, or is it not even worth trying?

Ghetto singlespeed does work—I have done it four times. Rejoin the chain with a little slack, enough to handle the max needed. And coast over bumps and through rough patches; just as pedaling is needed to shift, pedaling also helps the chain drop. Ghetto single isn’t likely to win any bike races. But it beats walking.