Editor’s Note: Bob Ward has been riding mountain bikes since 1985. Over the years he’s authored three guidebooks, owned and operated a mountain bike tour company, and much more. The opinions expressed in this commentary are his alone and do not necessarily represent the opinions of Singletracks.com.

I was out riding one of my local singletrack loop combos in South Lake Tahoe, California, the other day. While grinding up a singletrack climb, another rider appeared, headed in the opposite direction. This section was steep enough that if I was to dismount, I would have a bit of a challenge to get going again, so I assumed that this other rider would yield the right of way to the climber.

I was wrong. While I kept going, so did the descender, and when he passed, we actually hit handlebars. I came to a stop and wanted to say something, but the dude just kept flying down the trail. I mumbled something under my breathe and continued on my ride. I wasn’t going to let some jerk that was unaware of the rules of the trail ruin my ride. 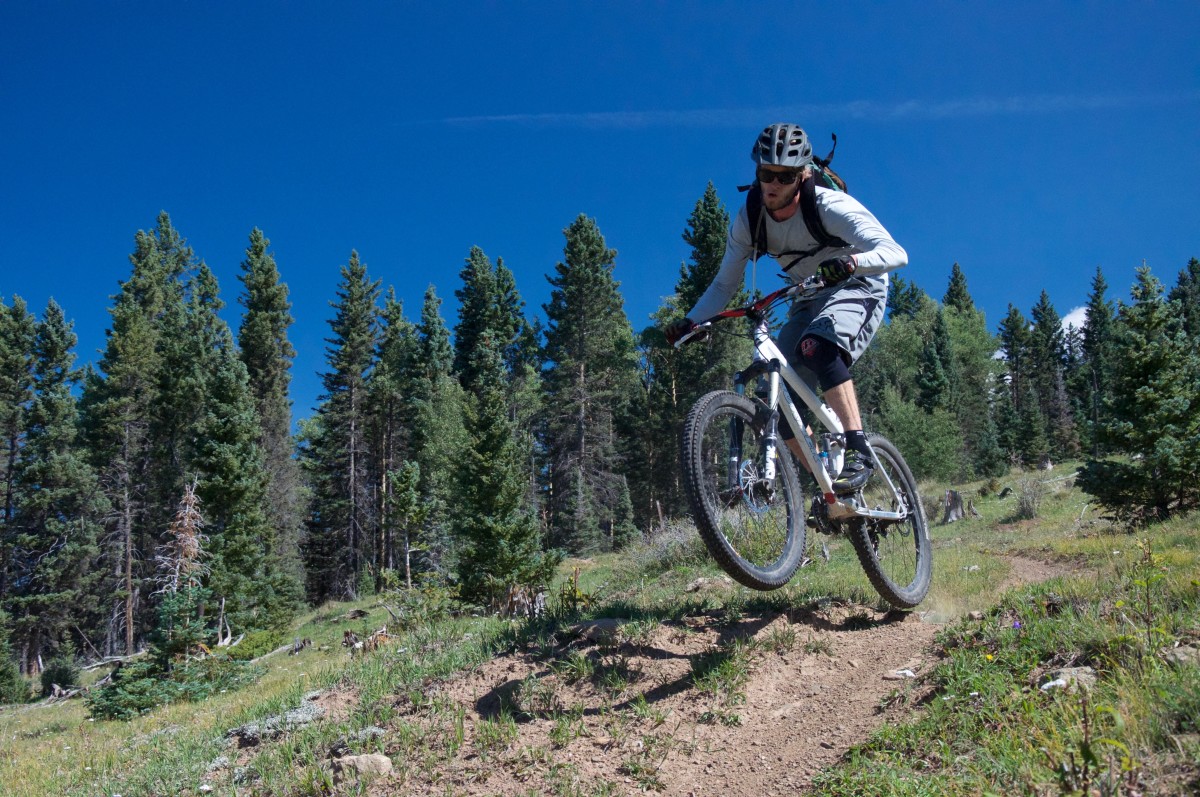 The incident was totally out of my mind by the time I completed the loop portion of the ride, until I noticed the same dude chilling on a rock. I decided I wasn’t going to say anything, but he spoke up and said he was sorry for clipping me. I answered with a “you know; you are supposed to yield to the uphill rider.”

To which he responded, “I know that and I usually do, but I was working on a personal best Strava time.”

While it was nice of him to apologize, in my mind, he was pleading innocent by means of the temporary asshole defense induced by Strava. We chatted for a few minutes, and the guy did seem like an ok dude, other than the fact that he was under the influence of that soul-sucking app.

I don’t like to use the word “hate,” but I will go as far as saying that I strongly dislike Strava. While the concept of tracking one’s ride is great, the changes that it induces in some people do way more harm to the mountain bike community than good. It truly turns some bikers into assholes, and a-holes on bikes are the biggest threat to keeping trails open to us. I have witnessed this transformation before my very eyes, sometimes with my own friends. In some cases, it can be a temporary Dr. Jekyll and Mr. Hyde type thing, but many are permanently trapped in this madness.

For many of us, mountain biking is a “soul” sport. We groove on all aspects of the ride, from the challenge of the terrain to enjoying the good feeling of being in the outdoors. If I see something cool along the trail or a nice view, I stop to enjoy it. When I come up to another trail user–human or canine–I slow down and say hello.

On the other hand, Strava puts blinders on many riders, and all they see is the trail right in front of them, and damn anyone or anything that should happen to get in their way and potentially slow down their average speed.

Look at yourself in the mirror. Has Strava sucked the soul out of your mountain biking? If so, it is easy to remedy: just delete the app and become one with the trail again.

Bob Ward
Bob Ward is an author and Singletracks contributor.

I agree with this article, but that doesn’t mean I don’t use Strava. I use Strava occasional to track my stats, but I don’t care about the section times. Ferris Bueller summed it up pretty well, “Life moves fast. If you don’t stop and look around once in a while, you could miss it.” Overall a great article that was nicely written.

Great opinion piece but perhaps a more accurate title would be “Strava Sucks the Soul out of Mountain Biking for Some People.” I guess the moral of the story is that if we see any of our riding buddies getting soul sucked, we need to stage an intervention. 🙂

Agree with both of the comments above, yet also agree with the article. I think this is a great perspective, but I also don’t think it applies to everyone at all times. Stay tuned for an article detailing some ways I use Strava that don’t include leaderboards or KOMs 🙂

A friend uses strava, but hes ok, just tracking his miles. I uses a free app that tracks my miles and calories burn, gives me an excuses to food binge after a ride 🙂

I totally get it. But to proclaim an app “sucks the soul out of mountain biking” borders on the hyperbolic, imo, as a holes will be a holes regardless.

I personally do use Strava. Like most I use it just to track the miles. Although I noticed that I am setting a lot of PRs this year, not from trying but because of a new bike.

In addition to rudeness interaction and failure to yield issues, I think the biggest issue is the Stravatizing of trails, e.g. cutting corners, avoiding rooty areas not to lose speed, etc. One particular trail I ride a lot was not specifically built for mountain bikers. It had a tightish “s” turn that added no value with trees in the corners that prevented leaning. I hated this spot when I was first getting back into mtb riding, but it was a safe challenge to improve handling skills. Now there is a trail right down the center. Yes, it’s faster but now how lost its character and challenge. Trail damage just adds another factor to the a-holeness.

Like others have pointed out, I use Strava to track my miles and to sometimes provide that little extra motivation to go ride and push a little harder if the mood strikes me.
Also, I’ve had “hot lap” shouted at me way before Strava ever existed, and there were riders in my local MTB org that would share lap times and compete with each other before Strava as well. Sure, Strava may provide more people the ease and excuse to be an asshole, but it’s not 100% to blame.

I really like strava. I enjoy competition and a good challenge. I don’t always have people to ride with and I think strava helps to push me to be a better rider, by going faster n farther than I would otherwise. If you let strava cause you to be a disrespectful rider you have more problems than just an app. I have cruised past other riders and have had them do it to me, obviously I try to avoid this but don’t let it ruin my ride.

Chill out man. Strava isn’t the issue. It only reveals how inconsiderate some people can be at times. Your buddy made a mistake and apologized. Strava didn’t make him do it.

It’s actually an amazing way to connect with other riders and has led to so many enriching experiences for the people I know because of the new friends they’ve made.

Many of the Strava users you have a biff with are probably younger. I’m guessing you’re an older guy, but when younger probably had a more competitive side and would’ve done some immature or inconsiderate acts as well. If not for Strava, some other app would’ve come along and given the same platform for people to use or abuse. Maybe you could try the app and find you can make some connections with other great riders.

I think the very opposite,,, stats @ end of ride are a great tool & read of self progression.. Don’t care if overall lap time or section suffers for what ever reason… Cause you’ll always see a pr if that’s your intention..
Simply … Arseholes will be arseholes up or down a hill ,, no one has right of way ,, though all should give way when on a trail.

I sometimes hear guys yelling STRAVA! I, however, like to yell out the words CANDY CRUSH SAGA, as I look down at my phone, just to mess with people’s minds.

You had me at soul sport! Love it. Thanks for this. As a professional xc and enduro athlete, I have now just deleted my Strava, for sooo many reasons. The main is that, just as with social media in general, it is so easy to get caught up in what IS NOT important. My training is focused and does not need to revolve around segments. I am happier and a better athlete and person when just doing my training and not “concerned” about proving something on Strava. All that matters competitive wise is when I am actually in the race and I race for the adrenaline rush within MYSELF, not against others 😉 Happy safe trails Bob!

To me, the heart of the matter is the matter is the question “Why do you ride?”. For some it is purely for recreational purposes. For others it may be a social activity or weight loss or fitness. Some race XC, enduro or other. All are legit IMO and using Strava to record any or all of those ride is just as legit. I record every ride (or run) on my Garmin and upload to Strava. I do this for multiple reasons. First I set fitness goals for the year in terms of miles ridden or run, elevation gain, exercise minutes, etc. Second, when I decided I would enter some races it became all the more critical not just to have a training plan but to measure my performance against the plan goals. Third, after turning 50 – and in defiance of letting Father Time win – I decided that each year I would set a goal of achieving performance levels I had not achieved previously in life. Being able to compare my performance both against my younger self as well as to others (especially in my age group) continues to motivate me. Although I recognize that my ability to achieve a KOM on a legit trail with numerous riders may be unattainable, I take great satisfaction in getting in the top 10% on any segment I ride. Does it come at the expense of someone else’s ride satisfaction? I certainly don’t think so as I don’t let it affect my trail etiquette. There have been plenty of times where I was going for a PR on a given segment but had to stop/yield/slow for another trail user. You have to recognize that possibility regardless of your ride style. I think the point you raise speaks more to the self-centered nature of certain riders that in my experience comprise a very small minority. And the absence of Strava won’t make that person any less of an a-hole on the trails… they’ll just have a different excuse.

I realize that I’m really late to this party but I didn’t see a reply that I felt hit the mark. Look, Strava is a component that people use to increase the enjoyment of their ride. It is no different than suspension or 12 speed drive trains. Actually, if you want to slow people down then put them on rigid single speed. I would wager there is a lot more stopping and conversation among people riding those bikes. A rider yelling using Strava as an excuse for being an asshole is only increasing their asshole factor by two.