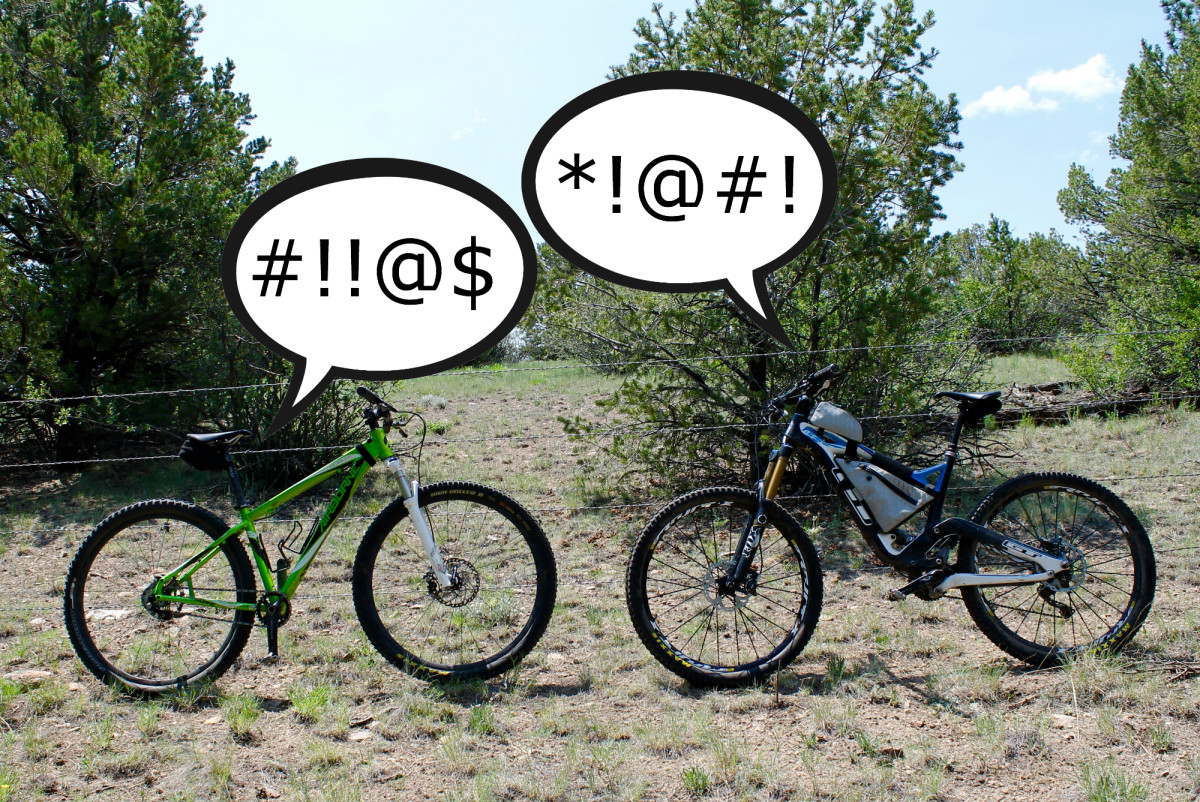 “Singletracks has no tolerance for personal attacks or verbal assaults made in our comments section, neither on our website nor on our official social media accounts. This includes attacks directed at fellow commenters, the author of the original article, or someone featured or discussed in the article. You are free to disagree with any and every topic, but if your comment crosses the line into personal attacks, you will be banned.”

Some other websites on the internet, even in our small subset of mountain biking, offer free-for-all comments section where seemingly anything goes: vulgarity; personal attacks and insults; hate speech against a specific race, religion, or sexual orientation; lewd, sexually inappropriate remarks, often directed at a female writer or commenter; endless flaming and thoughtless, vitriolic arguments… the list goes on and on.

As you can see from our comment policy above, we have absolutely no tolerance for any such behavior.

I think that sometimes, some websites don’t put a comment policy such as ours in place for fear that they are going to lose readership. They’re so desperate for eyeballs on their articles that they think if they make a stance against personal attacks and trolls, that they’ll end up losing their audience and consequently, their revenue streams.

While I think this is a motivation for some website, perhaps the more common problem is that many sites don’t have the manpower, or they simply don’t make the time, to police and moderate their comments sections. And that barrier, I do understand. With comments and Facebook posts that get several hundred or even over a thousand comments, it’s impossible for any one editor to read through all of those comments and make a judgement call about whether or not each comment crosses the line from disagreement to verbal assault or hate speech.

While those are two very real reasons to have caustic comment areas, I think those are both weak excuses.

In response to the first one, honestly, if someone is coming into our comments area and is posting hateful attacks, or any of the items mentioned above, we don’t want or need them here on Singletracks. Losing a few page clicks is an extremely small price to pay for banning the 1% scum of the earth, if it helps create a safe place for the other 99% of website members that want to engage in thoughtful, constructive discussions.

In response to the second issue, I can totally understand the time constraint. And I’m not guaranteeing that the editorial staff here on Singletracks will be able to catch and delete ever single personal attack or instance of hate speech. But that said, we—I—will try. I will do my best to keep our comment areas a safe place to engage in discussion and leave your opinions, because I think it’s important for every community to have a safe place to dialogue.

Never fear: you are always free to disagree

Sometimes when we talk about moderating comments, some people get the mistaken impression that if they simply post a negative comment disagreeing with the original article or another commenter, that simple disagreement is unbearable to us. But don’t worry, that’s not the case: you are free to disagree with anything and everything that we write, if you wish. That should be impossible, as we usually cover both or multiple sides of controversial issues (like ebikes), but still, if you want to play devil’s advocate, go ahead. I am a staunch believer in free speech as an inherent human right.

A problem only arrises when you move from disagreeing with someone to attacking them personally.

For instance, it’s OK to say, “I totally HATE ebikes,” or, “I totally LOVE ebikes.” But if you say, “Greg, you’re an asshole and I think you should burn in hell,” that’s not appropriate, and I will ban you.

But the reality is, if you’ve read far enough in this article to read this distinction, chances are you’re a level-headed human being who doesn’t go around calling the people you meet assholes and wishing them eternal damnation in the fires of hell. You probably are a very nice person, and you most likely enjoy the diversity of topics and opinions that we publish on Singletracks, and you probably contribute thoughtful comments on topics that you’re passionate about.

And for all of that, I thank you for being a valuable member of the Singletracks community! Quite honestly, YOU guys are the reason why we do what we do.

But for the other 1% scum of the earth? Let the banning continue.

Gear
These MTB Deals are Fire, including 40% off Patagonia Dirt...
Gear
The Maxxis Minion DHF Tire is Still the One to...
Gear
Mountain Bike Tire Repair Tips: From Emergency to Semi-Permanent
Gear
Never Underestimate the Power of a Good Zip-tie
Subscribe
Login
Please login to comment
10 Comments
Most Voted
Newest Oldest
Inline Feedbacks
View all comments

Would you tell someone at the trails that they’re a stupid idiot because their quick release was on the wrong side? Would you scream obscenities at my sister in front of me in real life? No? Then why do it on a website or YouTube channel where people come to discuss their favorite hobby?

Thanks for making Singletracks.com a civil place to agree or disagree.

So true Seth!! Thanks for chiming in!

It’s weird that I can read this in your narrator voice.

Thanks to the entire team for making Singletracks such a great community.

Agree with all of the above. This is a very informative and interesting website. Thanks for making it available.

This is why the singletracks.com community rocks! Lose the haters, and lets have fun and be ourselves.

Oh yeah, I’m new here and couldn’t agree more. I generally don’t write anything on-line that I wouldn’t say in front of my family.

It seems that I happen to agree with Greg on practically everything.

Haha, right on! Thanks Whistlepig!