The USA Pro Cycling Challenge (USAPCC) is coming to Colorado in less than 2 weeks and I just got back from previewing the first few stages late last night. From what I can tell, this is going to be the biggest and best cycling event in the country since the Coors Classic back in the 1980s! With the top 3 finishers from the Tour de France and 15 current or former National Champions, the USAPCC could easily rival the Coors Classic which was, at one time, the fourth largest cycling race in the world.

The USAPCC kicks off with a time trial on August 22 at 1:15pm. The course is just 5.18 miles long and starts in the Garden of the Gods, a beautiful park located just west of downtown and one of the area’s top tourist attractions. 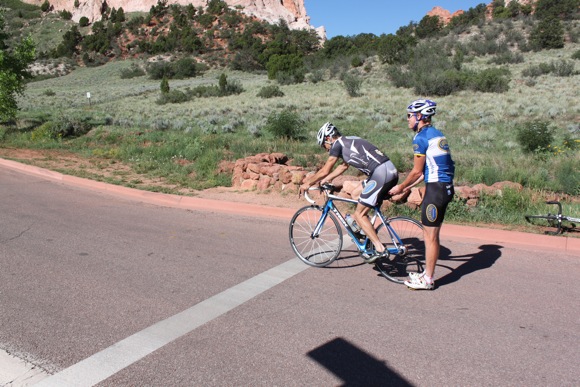 I got a chance to ride the course on a proper road bike with Cameron Chambers, 2005 24 Hour Solo National champion and Carmichael Training Systems coach, and all I can say is this course is going to be fast! From the starting line there’s a super short climb on the park road – maybe 100 feet or so – before a sweeping left turn and a bombing descent out of the park on Ridge Road. At the bottom of Ridge there’s a sharp left turn onto West Pikes Peak Ave for a few blocks before a dog-leg right onto Colorado Avenue. 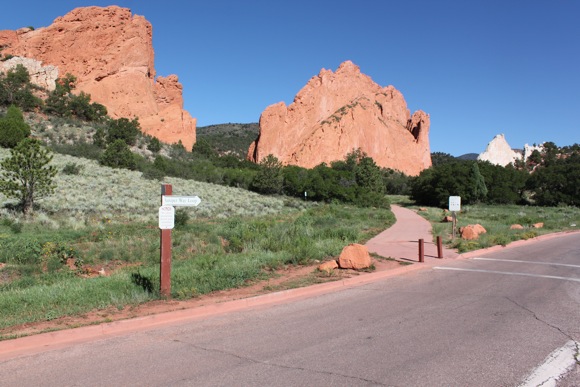 Backdrop to the start line.

Colorado Avenue is the main corridor through an area of town known as Old Colorado City and it should be a great place to watch the race with plenty of shops, restaurants, and bars dotting the route. From here it’s a straight shot (literally) to the finish downtown beside the Antlers Hilton hotel. The top riders will easily finish the mostly downhill route in 10 minutes or less! Still, this is the best opportunity to see all the riders as they come down the course one at a time. 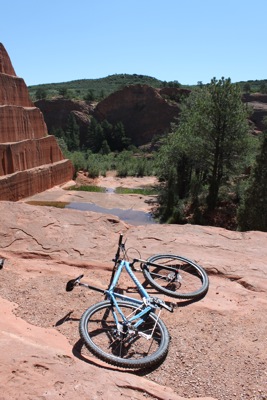 The starting line for the Prologue is literally steps away from the Ute trail, a mountain biking route inside Garden of the Gods. The trail is short and the area will probably be a zoo on race day but you may just be able to sneak in on a mountain bike using one of the alternate park entrances. 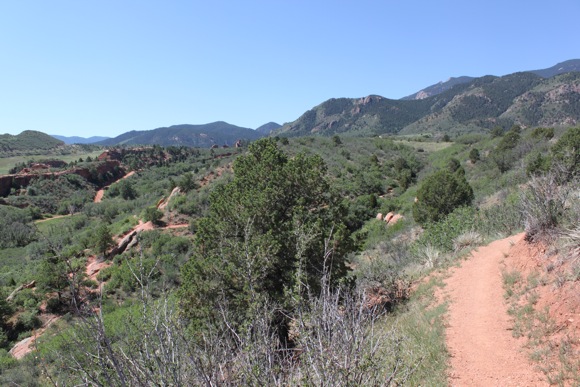 Just across US 24/Cimmaron from the Prologue course is Red Rock Canyon with a network of about 10 miles of mountain bike trails. Monday was the first time I had a chance to ride at Red Rock Canyon and I have to say it’s an amazing addition to the local trail arsenal. The trail features wide open climbs, white shale descents, Ponderosa pine switchbacks, and a few sandstone sections to keep you on your toes. Red Rock Canyon also connects to the Section 16 trails and it’s possible to link up with the miles of trails in Cheyenne Canyon without leaving the dirt for more than a half mile.

Before my rides Monday I got a chance to meet up with Kings Chef Diner owner Gary Geiser while sampling a yummy breakfast burrito filled with eggs, crispy hashbrowns, and sausage and topped with Colorado Green Chili. Gary is a mountain biker with serious credentials (Ned Overend was his neighbor in Durango and he trained at the US Olympic Center in town) and he’s been fueling C-Springs athletes for more than a decade.

Now some people may not know this but in addition to mountain biking I’m also an amateur competitive eater (I once got a t-shirt for finishing a 5-lb burrito). Gary has his own eating challenge at Kings Chef called the New Mexico Stomper, a 5 lb. burger served with a large order of fries. Finish the whole thing in less than an hour and it’s free. So far only 2 people have completed the challenge – both women – which sounds like a dare to me. Stop in for a bite and there’s a good chance you’ll rub elbows with some elite riders (and eaters).

Along the prologue course, check out Front Range BBQ (one of my old faves) or the newly opened Firehouse Southern Style BBQ. Meadow Muffins is also a great local bar / restaurant right on Colorado Ave.

Colorado Springs has a ton of hotels in every price range you can imagine. If you want to go high end, stay at the Antlers Hilton and ask for a room facing south or west to get a glimpse of the action. During my trip I stayed at the Cheyenne Mountain resort and it was great – a very quiet, relaxed spot on the west side with easy access to the best mountain bike trails. 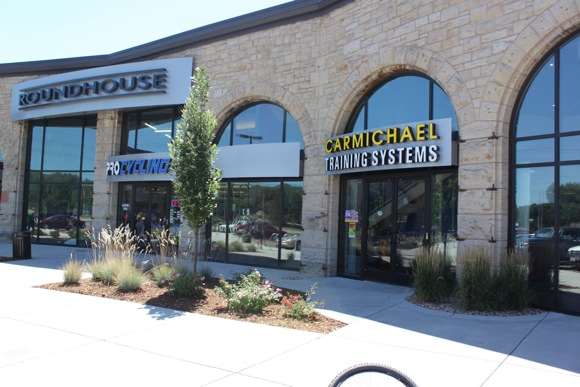 Chris Carmichael, Lance Armstrong’s longtime coach, is based out of Colorado Springs and his Carmichael Training Systems company is housed in the old Van Briggle pottery building on US 24, blocks from the prologue course. And while the company is known for their training videos and remote coaching services to some of the world’s top athletes, they also have an incredible workout facility available to locals for a monthly fee. Which just makes me want to move back to Colorado Springs even more now…

And that’s just the USAPCC Prologue! As you can tell there will be a ton to see and do around the race later this month. If you live in the area there’s no excuse for missing this race and even if you don’t live nearby, this is a great excuse to watch a world-class cycling event while checking out the MTB trails in Colorado Springs. Next stop: Salida, CO and Stage 1.

Gear
At $480 a Pair, the Alloy Hunt Trail Wide Wheels...
Community
Stop Apologizing: How to Pass and Get Passed on MTB...
Gear
These Are the MTB Products You Didn't Know You Needed
Trails
8 Months after Being Shut Down, San Lee Gravity Bike...
Subscribe
Login
Please login to comment
6 Comments
Most Voted
Newest Oldest
Inline Feedbacks
View all comments

Are you kidding me?

@jpo, are you commenting on the fact that trek7k is blogging about road biking, or that he spelled it “rode bike”? 😀 😀

Ha, I didn’t catch that typo! Clearly I don’t write about ROAD biking much. 🙂

I also have a hard time writing about TIME TRIALS. The second word always comes out TRAIL.

@mtbgreg1- the spelling. I was just excited that I, a person who would surely have been stoned alive by the populace for my transgressions against spelling and grammar, were it not for spell check, was able to catch an error like that.

@trek7k- I do the same thing when reading. It usually takes three or for paragraphs for me to realize that no one is trying to tell me about the new discipline of time trails, they are just talking about Freds in funny helmets.