It was certainly an ominous start. Gun metal gray clouds churned out sleet and the intermittent snow flurry, and each rude gust of wind had me retreating turtle-like further into my shell. At the Loma trailhead in Fruita on a late May morning, participants and organizers of the Tour de Bloom were adding layers, shuttling bags to the trailer, and obsessively consulting their phones for real-time weather updates. The words “partly sunny” accompanied by the happy sun/cloud icon turned several faces incredulous as they glanced from phone to sky and saw no connection. The native Colorado people on the four-day, three-night supported bike camping trip all looked askance and said “well this is unusual…”. However, upon further questioning of Tour veterans, turns out the thing was cancelled for rain two years ago, and oh, before that there was the time they woke to eleven inches of snow at North Beaver Mesa, and the mud?  “Who-eee!  That stuff gave us bulldozer tires and stopped my drive train cold!” 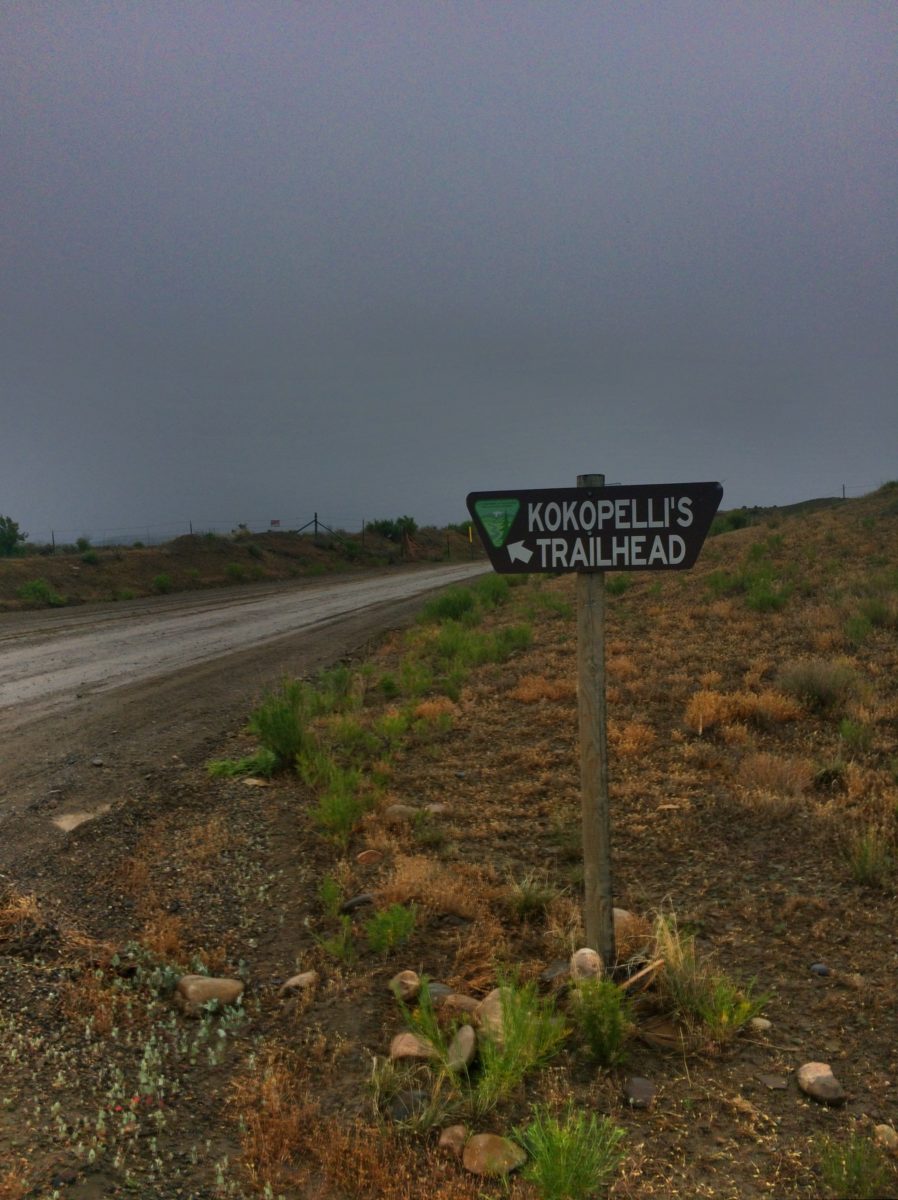 “Usually it’s not like that though,” my friend Mary Lyn said, and she should know, having done the 150-mile Kokopelli Trail with COPMOBA eight times in the last 15 years. “Usually it’s pushing 95 or 100 degrees. I got heat exhaustion once. And Susan broke her arm.” Well shucks! Where do I sign up?

COPMOBA–the Colorado Plateau Mountain Bike Trail Association (our collective observation regarding the missing “T” was met with indifference)–has been organizing the Tour de Bloom since 1989 as a fundraiser for its non-profit. COPMOBA is a “member supported, nonprofit organization of volunteer mountain bikers dedicated to advocating for, building, and maintaining sustainable singletrack mountain bike trails on the Colorado Plateau in Western Colorado.” While “singletrack” is largely missing from the 150-mile Kokopelli trail connecting Fruita, Colorado to Moab, Utah, this does not mean that the trail is boring or lacking challenge. Unfortunately, due to the aforementioned sub-optimal conditions, we were forced to forego some of the skinniest and most challenging sections of trail, known as Mary’s loop just outside of Fruita.

While mildly disappointing to start this journey on the road, this California native was so enthralled with the wide-open western plateau—with the pure Colorado-ness of it—that it was of little consequence. The scrub, the bruised sky still squalling in the distance, the “Honk if You Love Fracking” yard sign all began to form the underlying story of this place. Named for the Native American fertility deity, the Kokopelli’s trademark hunched and fluting form is ubiquitous around the Southwest. His list of duties, according to Wikipedia, includes presiding over human and game animal childbirth, agriculture, and representing the spirit of music. In the agriculture domain, Kokopelli’s flute-playing chases away the winter and brings about spring.

And for this last power I was eternally grateful. By delaying our start by three hours, we 26 guests and guides evaded the grumpy tempest and rode rain-, snow-, sleet-, and wind-free. It is also said that Kokopelli is a trickster God, and this was on display as well, for those grouchy skies lured two fully paid campers, at $695 each, to pull the plug and head for Moab instead. I understand the temptation, but can’t suppress a tiny, self-satisfied snicker at having stuck it out—for in the end, the conditions were angelic.

Arriving at camp the first evening, horsewhipped and saddle sore, the list of tasks to be accomplished before I’d be able to collapse upon a camp chair and coddle a cold beer felt interminable and daunting (“first world problems” to be sure…). First order of business: shelter. After an arduous process of scouting for the must-haves—flat, view, away from the lieu—I moved the pointiest rocks, won the argument with my tent poles, and hurled my suddenly overpacked bag into the tent lest it lift off and tumbleweed into the canyon. After turning a bit blue blowing up my Thermarest, I sat down, panting, and began the chore of taking off my sweaty, stinky, sticky bike clothes, bike shoes, and helmet.

Halfway through this chore, pretty pink Shredly’s around my ankles, making sounds more akin to childbirth than a mere change of clothing, a bright, piercing stinging in the tender valley between my big and second toe made me nearly levitate. Seems I’d pitched my tent on an anthill. And not the friendly “you do your thing, I’ll do mine” variety of ant either. The ferocious, “put up yer dukes, trespasser!” kind of ant. The mean red kind with big fangs. I sighed and huffed for a few long minutes, feeling quite put-upon. I commenced shooting all objects back out of the tent, emerged half-dressed, and stomped around uprooting tent stakes pounded in only moments before and moved the tent back toward the road by four feet, re-pounded, and called it good.

World Wide River Expeditions, a family business out of Moab, has been outfitting the Tour de Bloom for many years and was expertly staffed by four folks under age 21. Songs sung in harmony accompanied their work—washing, chopping, cooking, cleaning, hauling—and when the work was done, they gathered around a banjo in the back of the now-empty trailer and sang some more. Filtered strains of an otherwise plastic Top 40’s tune were made soulful and sweet in their hands and accompanied my descent into sleep. But in an abrupt return to the woe-is-me of camping, there’s the wee-hours pee thing. I woke in a crumpled pile near the tent door, having slid onto a rock now poking into my spleen. Apparently I’d forgotten to re-clear and seek flat after the ant incident. I straightened up and ignored nature’s call—it just seemed too hard.

Then, a soft-focused, ethereal dream of a bathroom. I pressed the proverbial snooze button once again, only to dream that aggressive porta-potties were bearing down on me. Clearly it was time. The one saving grace of having to extricate yourself from your warm, cozy sleeping bag, find your shoes, fight the tent zipper, cramp, fall over, and start again–all without peeing your pants–is the stars. Desert stars will remind you of your human smallness, but in a way that is somehow soothing. The smudged wipe of the Milky Way taking off at an angle, the Big and Little Dippers, maybe a planet or two if you are lucky–these are fine reasons to emerge from your cozy cocoon. 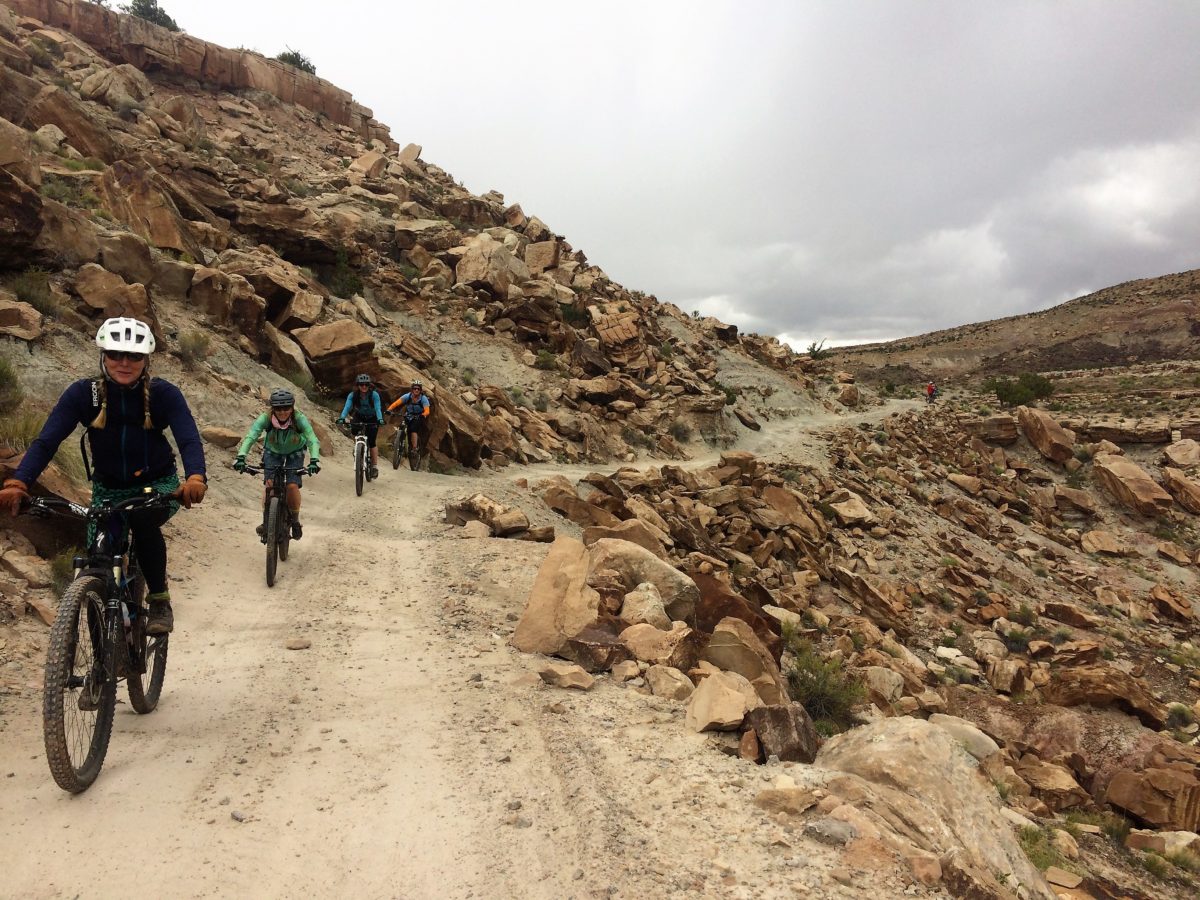 While all four days of the Tour de Bloom were challenging (Day 1: 32 miles, 3,000 feet, Day 2: 49 miles, 2,800 feet, Day 3: 29 miles, 5,900 feet, Day 4: 41 miles, 3,700 feet), none was more so than day three. Starting from our camp at the base of towering, monolithic, and swirling red rock at Cow Camp, we set off toward North Beaver Mesa under clear blue skies and the promise of our warmest day yet. Around hour five, on one or another interminable climb, Mary Lyn said “…and at this T-intersection up here, we go right then it’s just a half a mile to camp!” Don’t tell her this, but I swallowed a little sob of happiness and pretended like the tiny tear leaking out the bottom of my sunglasses was “just allergies!”

Short distances can certainly slow when you are tired (and hot, and sweaty, and hungry, and bonking), but after a half-hour, it sure seemed to me that we’d gone more than a half mile. As I summited one after another crest, turned corner after corner with no gleaming tent city coming into view, I began to question the friendship that had brought me here. Who was this woman? Why had she done this to me? Didn’t I now remember a similar instance on the Tahoe Rim Trail where I was promised “no more climbing after this teensy tiny little bump” and then proceeded to bleed from my quads for the next two hours? Do I have a learning disability?

When I did finally arrive at camp—the best yet, in a grassy meadow with a view of the snow-capped La Salle Mountains and a gentle breeze shushing the pines—Mary Lyn looked sheepish and dodgy.

This being the last night of the trip, an enormous bonfire was built and after yet another deeply satisfying post-ride meal and a shower (in a neat shower tent thing with real hot water), the guides whipped us into an auction frenzy. A staple of the Tour de Bloom, the auction consisted of items donated from local bike shops, REI, clothing outfitters, and the like. And because everyone knows you spend more money when lubricated, out came “the shot ski”—four shot glasses glued to a ski that turns drinking inadvisable concentrations of alcohol into a team sport.

By all accounts, it worked.

I scored a Wyoming-esque belt buckle, Mary Lyn will be yurt glamping (better than it sounds) at a fancy resort in Leadville, and Zach-the-adorable-outfitter-guy ended up with the best item of all—a sleek Haro mountain bike. He and I started a petite bidding battle, but a spontaneous, flash-mob of generosity seized the crowd and it was determined by wordless decree that the bike would be bought for Zach so that next year he can ride the route after having schlepped clients’ crap on the Kokopelli since he was eight years old. And that spirit combined with the camaraderie are really the essence of the Tour de Bloom.

When I asked Chris Muhr, president of COPMOBA, what he’s most proud of, he referenced the positive impacts and quality of life benefits that mountain bike trails bring to small towns in Western Colorado, “and that we were inducted into the Mountain Bike Hall of Fame, which isn’t too shabby for a little group of trailbuilders.” He also notes that this plucky band of volunteers “has built some of the most sought after singletrack in the world without using tax payer dollars and without a large corporate sponsor like a Park City, Winter Park, or Aspen Ski Company.” And they should be proud. Every guide on the trip was a volunteer, but you’d think this was their profession. They ran it like a Swiss watch (except for that one guy from North Carolina that they lost, *but* they found him pretty fast and he didn’t seem too mad…).

As we descend into Moab after completing upper Porcupine Rim Trail, the most challenging and fun trail segment of the trip, I’m captivated all over again by this landscape. I slow to my rightful place at the back of the pack, sit up a bit in the saddle, and try to ingest this landscape, to commit it to memory so it can be called upon in a time of need. And since the next Tour de Bloom is now a full year away, I’m sure to be reaching often for this file. 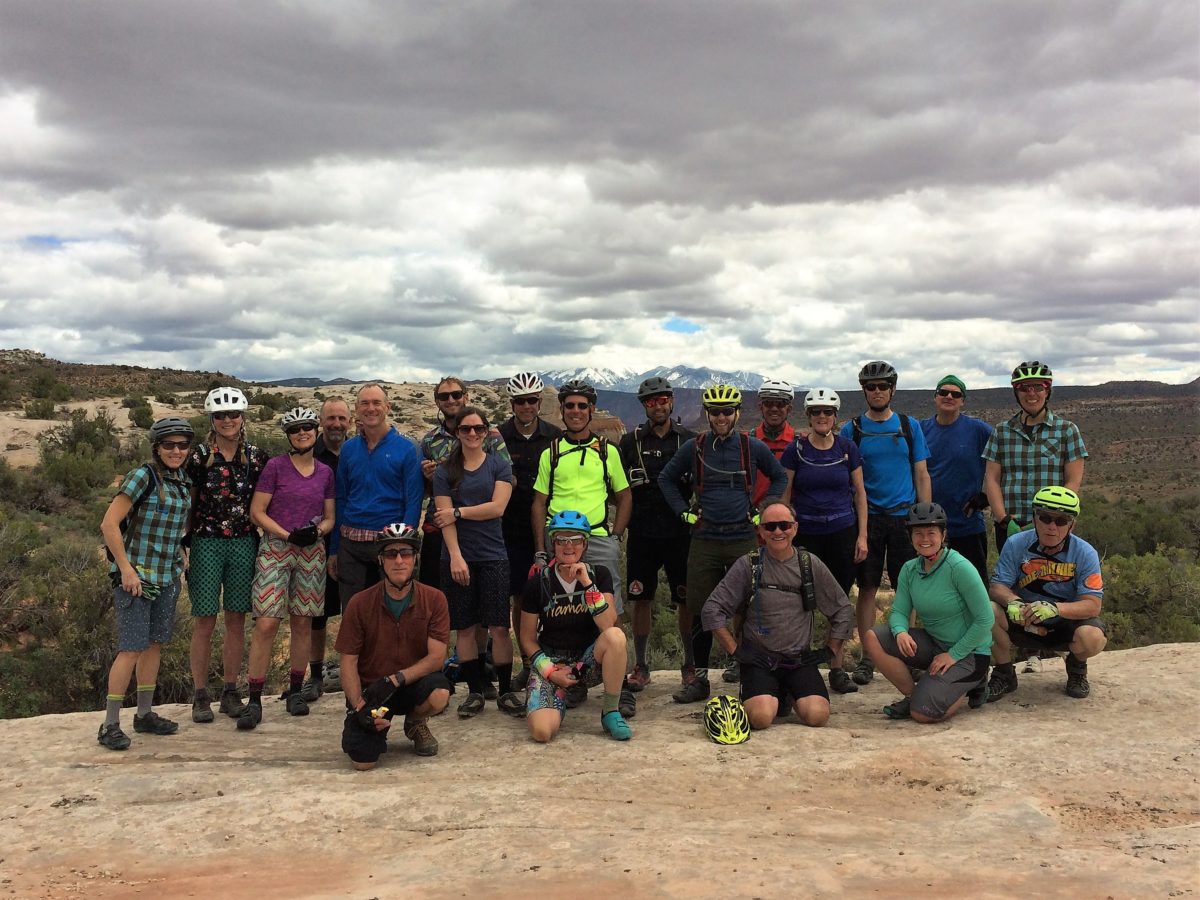 Gear
You Have $5,000 to Spend on a Mountain Bike. Which...
Gear
Never Underestimate the Power of a Good Zip-tie
Progression
Sizing Up or Down Plus Handlebar Widths and Crankarm Lengths:...
Gear
The Shimano GRX Drivetrain Brings Familiar Mountain Bike Tech to...
Subscribe
Login
Please login to comment
1 Comment
Most Voted
Newest Oldest
Inline Feedbacks
View all comments

A great read. Definitely makes me want to give this thing a go sometime.