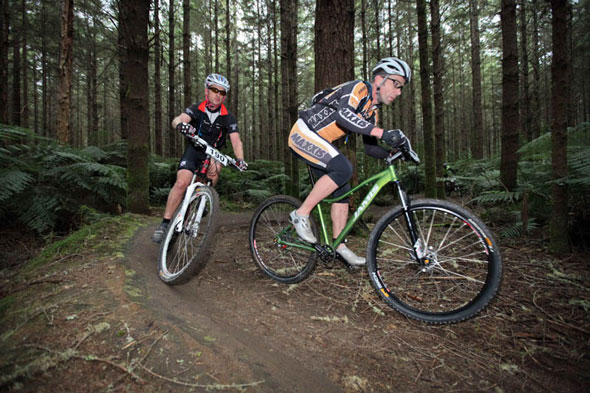 The Singlespeed Mountain Bike World Championships are being held in Rotorua, New Zealand this weekend and there are over 1,000 riders from 30 countries registered for the main event. The course covers about 40 km through Whakarewarewa Forest starting at the Waipa MTB park and promises to be challenging, even by World Championship standards.

According to this article, some of the riders plan to wear costumes during the race – and not because it’s almost Halloween (do they even know what Halloween is in New Zealand?). One rider explained it this way:

I guess you can call it the punk of mountainbiking – back when it all got started not too many people were interested in singlespeed but now like punk it has become fashionable. It’s all about having fun – getting dressed up, having a few beers and racing just for the hell of it.

This year’s course offers a shortcut available to riders who chug a beer before hitting the alternate which sounds like a no-brainer to me. Perhaps the coolest part of the Singlespeed World Championships is the prize: the top male and female finishers get a tattoo! The Rainbow jersey is temporary but the Singlespeed World Championship honors are permanent!

And for those of you who are into the Gates Carbon Drive thing, Gates rider Jake Kirkpatrick took 3rd in the singlespeed division of the Whaka 100, a 100km endurance race that kicked off the overall Rotorua Bike Festival this week. Jake rode a fully rigid Black Sheep titanium bike with the new Gates Center Track carbon belt which seems like a pretty solid endorsement.

Lots of other cool stuff is happening around the race this weekend – if you can make it to Rotorua definitely send us a report!

Four posts in one day… busy busy over here on Singletracks!

As a note..some may find humorous when said with an English perspective.
“Wh” in Maori (native language of NZ) is pronounced as an “F”.
Enough said…now re-read the location of the race again.