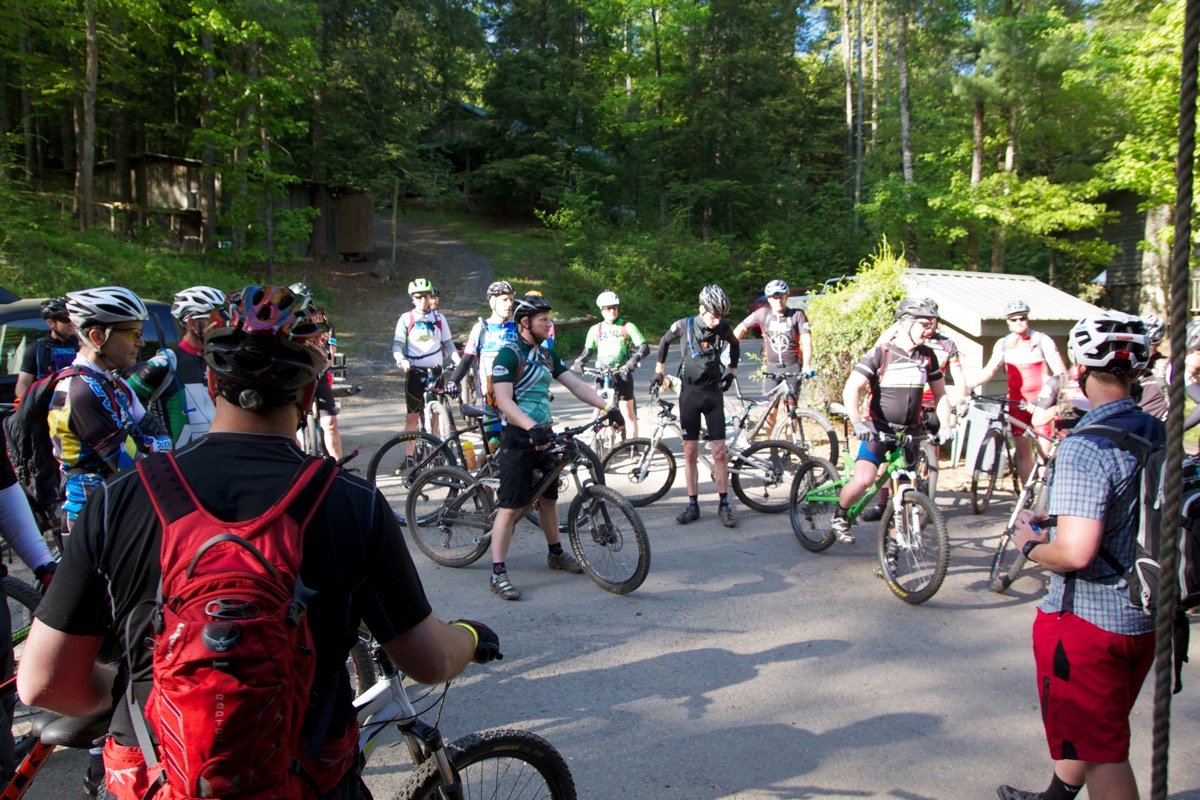 This past weekend, a group of around 30-40 riders met at Mulberry Gap Mountain Bike Getaway in Ellijay, GA, for a long day in the saddle. There were two route options: 20 miles and 3,600 feet of climbing or 33 miles and 6,000+ feet of climbing.

I pre-rode this loop with my buddy Chris about a month ago, although we had to change the route on the long option slightly from what was originally planned. Initially, we were going to ride about halfway down the Mountaintown Creek Trail then hike-a-bike up and over a ridge to get back to the Bear Creek side of the area. Apparently, that connector trail is a bit of a sore spot in some ongoing land access issues, so we tweaked the route to follow Mountaintown Creek all the way to Gates Chapel Road. Interestingly, this didn’t effect the overall mileage and elevation in any significant way. However, it did mean a bunch more creek crossings!

I arrived at Mulberry Gap around dinner time on Friday evening. Earlier that afternoon I had finished putting together a new test bike, so I was anxious to try it out. I skipped dinner and headed up the Pinhoti 3 trail to the Cohutta Overlook. The light was fading, so I grabbed my NiteRider and pedaled hard to make it up to catch the sunset. My effort was rewarded with an absolutely stunning view from the overlook. Incidentally, catching the sunrise or sunset is the only acceptable reason for missing a meal at Mulberry Gap.

Ripping down Pinhoti 3 with darkness approaching was a first for me and also really fun. As I descended into the valley, it got darker and darker. The new bike shakedown ride was such a success that I decided to ride it on the Brutal Loop the next day.

Terrapin Brewery had kindly donated some of their Recreation Ale to keep us hydrated, and I had the idea to stash some at the Mountaintown Overlook. I loaded up some beers in a heavy duty trash bag with some ice and drove 10 miles up a gravel road to hide them for the following day.

Friday was pretty chilly with temperatures dropping into the low 40s. I was tent camping and had chosen the wrong night to try out my new summer weight sleeping bag. My feet were so cold it was hard to sleep. When the sun came up, I was tired but glad to be moving around.

Folks started streaming in and we got started around 9:20am. Both routes start with a long gravel slog, and the group got strung out quickly. The first stop was five miles in at the Bear Creek Overlook. The short option would turn off and start heading down Bear Creek while the long option continued on the gravel for another eight miles.

When I got to the Mountaintown Overlook, the first group was finishing off their beers and heading out. The rest of us took our time, hanging out and snapping photos. Since there was still plenty of beer left, a few of us grabbed another for the road.

Back on the bikes, it wasn’t long before we reached the Mountaintown Creek trail. The descent is so much fun! Right away you rapidly lose elevation. At first, the trail is smooth with lots of water bars, which are perfect for getting the wheels off the ground. Then the trail gets even steeper and adds rocks to the mix. You’ve got to be on your game here. Unfortunately, we did have one rider go down, splitting their knee open and requiring some stitches.

The trail eventually mellows out significantly. You’re still losing elevation, but it’s much flatter. This part of the trail takes you across Mountaintown Creek well over a dozen times. Some crossings are easily rideable while others were knee-deep. The chill grade of the trail really lets you look around and take in the surroundings, and it’s beautifully lush. There are ferns, moss, and rhododendrons everywhere.

Once Mountaintown ends, there’s a short section of road and gravel before you get back to the singletrack. My buddy Chris and I drank our backup beers and decided it would be a good idea to earn some extra credit by riding a trail that got cutout due to the reroute.

While the other riders we were with headed up Pinhoti 1 back towards Mulberry Gap, Chris and I rode to the top of Bear Creek. It added another 7-8 miles and 1,000 feet of climbing to our day, but the Bear Creek descent is too good to pass up.

Once we came down Bear Creek, Chris and I dragged ourselves up Pinhoti 1, bombed down the backside and headed over to Pinhoti 2. I was actually feeling ok considering how far along we were, and I made quick work of the climb. One last regroup with Chris at the top of Pinhoti 2 and we tore ass down. We ended up being gone for almost seven hours with 4:47 of ride time, 40 miles of distance, and almost 7,000 feet of climbing.

Back at Mulberry Gap, we rejoined the others who had already finished. Beers were drunk, high fives were exchanged, and some fantastic beef brisket was eaten.

Thanks to everyone that came out to ride, and to Terrapin for the beer! Folks came from all over the Southeast, and even farther. There was a couple from Indiana and even one guy from Colorado (alright, he was in Atlanta for a conference, but still, he came up to ride). 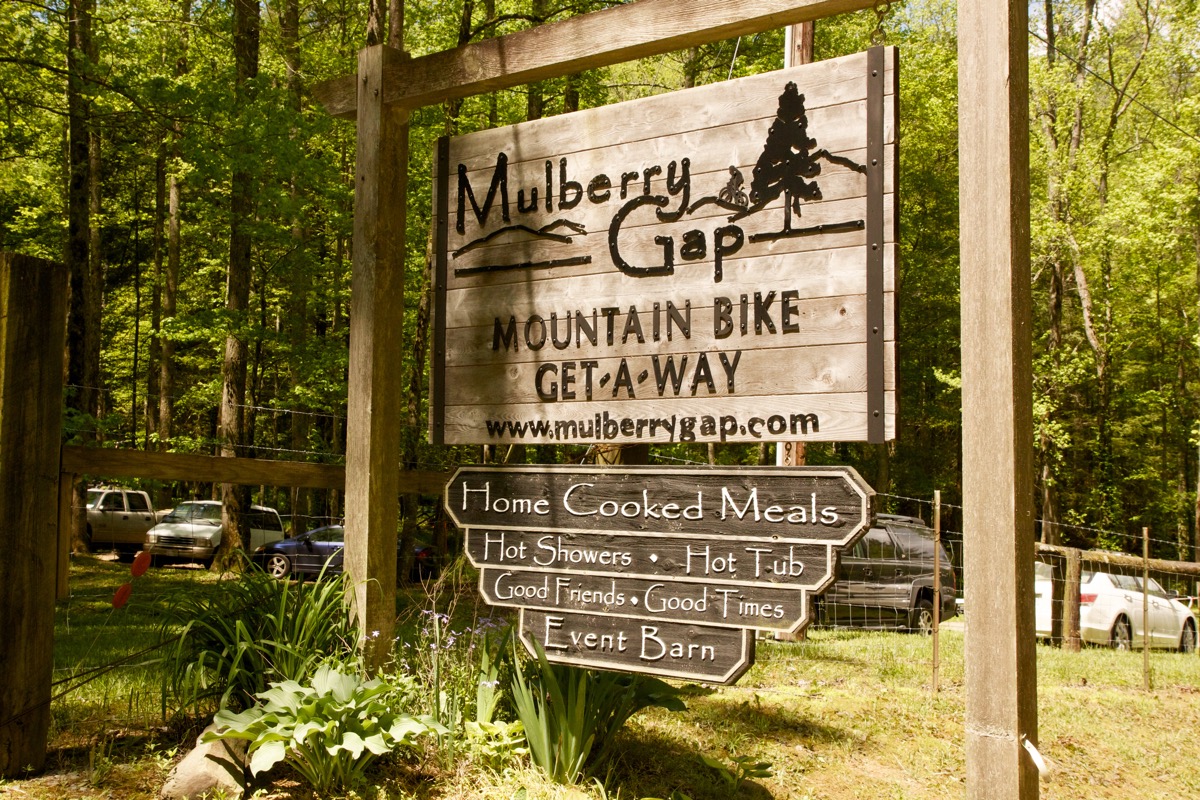 A special thanks also to Kate Gates and the rest of the crew at Mulberry Gap for handling the logistics of the ride. You’ve probably heard us rave about them on the site before, but we can’t overstate how awesome it is to stay there. The property itself is beautiful, and they recently built a trail and skills course on site. They’re surrounded by some of the best riding in the Southeast right out of their gate, or you can use them as a base camp to explore other trails in the area. Their a-la-carte pricing means you can go as bare bones or as baller as you want. Just need a place to pitch a tent? No problem. Want to stay in a private cabin and have all your meals cooked for you? They’re happy to oblige. Bring your friends, family, and dog–there’s something to do for everyone!

We’re already talking about how to make this happen again next year, so if you missed out this time, pencil in a long weekend at Mulberry Gap for next spring.

Culture
The Starting 5: Getting Back to Mountain Biking, Together
Trails
Opinion: 4 Reasons Why You Should Vote For Yellow River...
Community
Blankets Creek MTB Festival: Pedalpalooza (May 5, 2012)
Community
My First Group Ride With The Singletrack Sisters