Stepping into a pair Five Ten Impact high tops, I couldn’t wrap my head around the fact they were mountain biking shoes. They look and feel more like my 90s-vintage Air Jordans. By comparison, my other bike shoes – Giro Privateers – seem like a ski boot spawned a ballet slipper.

The Five Tens also felt a little foreign–not as comfy as my well-worn hiking boots, and bulkier than the trail running shoes I wear daily, but definitely a big step up in comfort from the Giros. To make things more foreign, the Impacts were my re-entry into the world of flat pedals after spending more than a decade in clips.

That’s a story for another time, but I wondered if the “Stealth” soles on the Five Tens would be sticky enough to keep me from jettisoning off the pedals when I hit the first bump, or bunny hopped with less-than-perfect form. I was genuinely concerned. When I bounce through technical terrain, pop a waterbar, or hit a jump, my muscle memory takes over. Unfortunately, my muscle memory is prone to lapses.

Through the years, I’ve developed a bad habit of using the clips for leverage to unweight the rear tire and force it where I want it to go. Would that habit come back to haunt me when I didn’t have the leverage? Would I hop off the pedals, pile up in a wad of bone, carbon, and flesh, and curse the idea of stepping out of my clipped-in comfort zone?

The short answer was no… and yes.

The Stealth sole stuck to the pedal like a starving octopus on a fat clam. There was no lateral movement when pressed against my Specialized Bennies pedals, so slipping off the pedals seemed impossible.

But when I did my half-ass, stiff-legged bunny hop, I lost contact with the pedals. Can’t blame the shoes for that, and it was a good opportunity to relearn proper form. When I did it right, the shoes performed flawlessly, and I also enjoyed the option of dropping a foot in a sandy corner.

My next concern was whether those semi-cushy rubber soles would be so soft that pedaling for hours would feel like running a marathon in tundra. Surely there’s a reason for those stiff soles on the Giros, which for the record, I do not dislike. I just came up in an era when you wanted light, stiff shoes, and comfort be damned. If they didn’t cinch tight enough to pinch your feet, it didn’t feel like they were doing their job.

At 1.3 pounds each, the Impacts aren’t featherweights, but they’re also listed as “gravity” shoes, so they’re built burly rather than svelte. To be honest, I might have opted for a lighter pair if Five Ten hadn’t steeply discounted the Impacts on its website because they were an older model, but they are similar to the current version.

If I had a complaint, the 10.5 size I ordered was a little snug in the toe. Had they been hiking boots, they would have gone back for a larger size, but I reminded myself I wouldn’t be walking for miles in them. Had I gone a half size larger, they might have fit too loosely, but I don’t know for sure.

I didn’t do any time trials between the Five Tens and Giros to see if there was a performance penalty, and because I am not racing, it wasn’t a major concern. I will say I scored a few PRs on Strava segments wearing the Impacts, and while I can’t credit the shoes for that, I can’t fault them for substantially slowing me down, either.

After several rides, I found myself wearing the Five Tens around the house because I forgot I was wearing biking shoes. That’s a high compliment because I usually jettisoned my Giros before I got back in my truck. Not because they’re terribly uncomfortable, but because I didn’t want to sound like a horse on a boardwalk if I stopped by the Quickie Mart for a post-ride drink and munchies.

Will the Five Tens become my go-to shoes? Definitely for riding my Santa Cruz Bronson. The shoes remind me to use proper form when downhilling, aggressively cornering, and hitting jumps, so the minor pedaling penalty is a fair trade off. 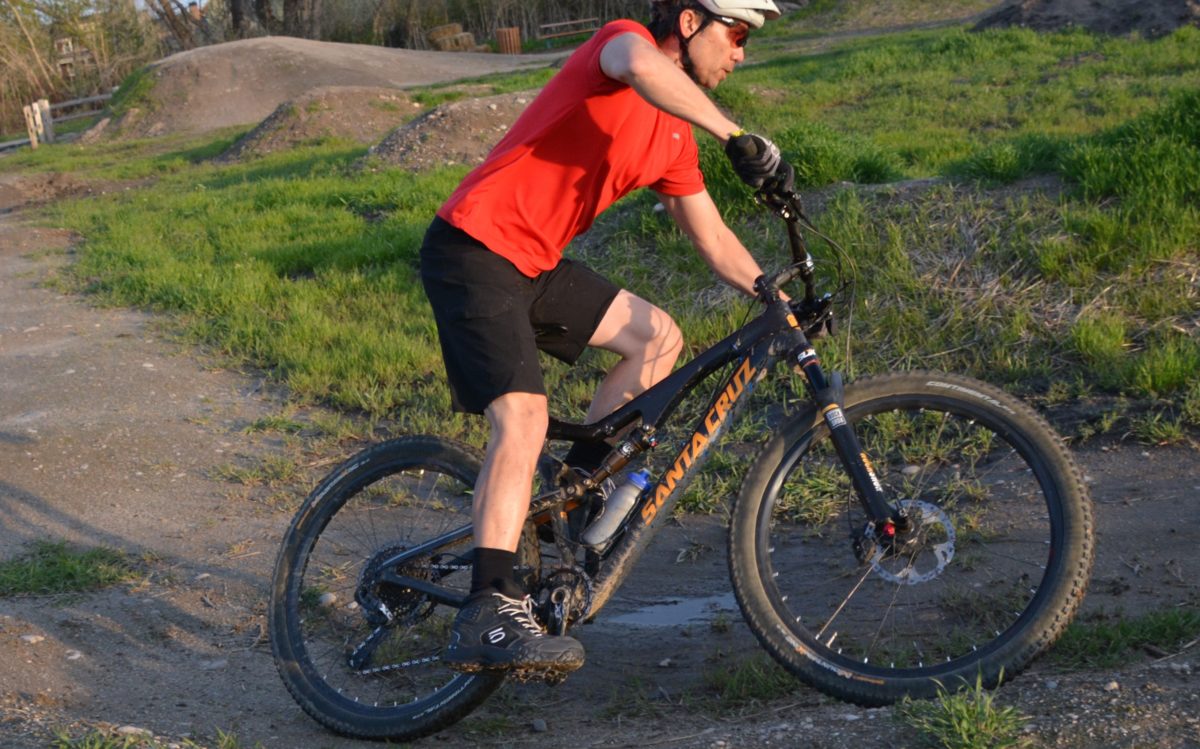 If I were doing an all-day XC ride, especially if it involved lots of climbing, I would probably go back to the hard-soled Giros and clips because I will take any efficiency gain I can get. But for general trail riding and any gravity or bike park riding, no question I will be shod in the Five Ten Impacts.

My only remaining concern will be how they fare during summer heat. Will the combination of black, leather, and rubber turn them into a foot sauna? Don’t know, but I can’t wait to find out.

I just literally bought a pair of these and I ride the same pedals! Crazy world…anyway good review thanks for writing it. These shoes make me feel more confident, and the ankle protection doesn’t hurt.
P:S: I am in North Carolina and Summer has already begun for us. It has already been hitting the low 90s periodically with lots of humidity. These shoes feel totally fine in hot weather. They feel almost as cool as my Specialized comp clip shoes. No problems with heat with these puppies. #fivetenrocks

Good to hear. I figured nothing is going to be cool and breezy in 90 degree heat, but I would like to avoid foot ovens. Thanks for the intel.