I could hear the other racers stirring, getting ready to leave. 30 of us had camped there: 29 other riders had made it out of Canada and back to the United States, and I made it early in the morning… on Fathers Day, no less.

Reluctantly, I started the process of packing up and leaving. I was moving slowly, tired from a previous wild day on the bike. I had left the town of Elkford as early as I could, not anxious to go back out into the cold after spending that first Friday getting rained on. My rear bag got a huge rip in it that first day: under the heavy load of my sleep system and extra layers, it came so close to the tire that it would hit at the bottom of all the steep downhills, which eventually caused a huge tear.  When I arrived in Elkford, I was forced to rent a room to do some thinking, fixing, and rearranging.

I laid out my gear and reconfigured how I was going to carry my things for the next 20 days.  I usually plan on not using a back pack, but I do carry a small collapsible pack to expand my carrying capacity over long, hard, supply-less terrain.  But now after that first day issue, I was going to be stuck with a load on my spine for the rest of my time on the Continental Divide.

That second day I had left Elkford two hours after my friend Steven did. He was in “race mode,” and I was in “keep it together mode.”  My real desire was for black coffee confidence, and I wasn’t leaving town without it. The bike was so filthy that I decided to hose it down and lube it up–after all, this was going to be a 20-something day epic, not a 300-mile sprint.

The ride in and out of Sparwood was magical: 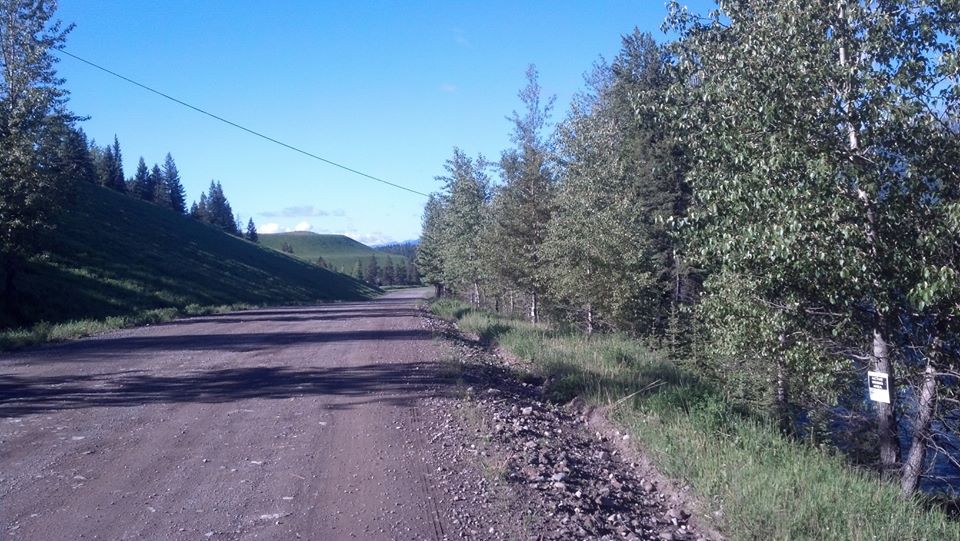 The only time I remember ever tearing up on a bike ride was on this stretch of road. The Continental Divide route was everything I had hoped it would be. 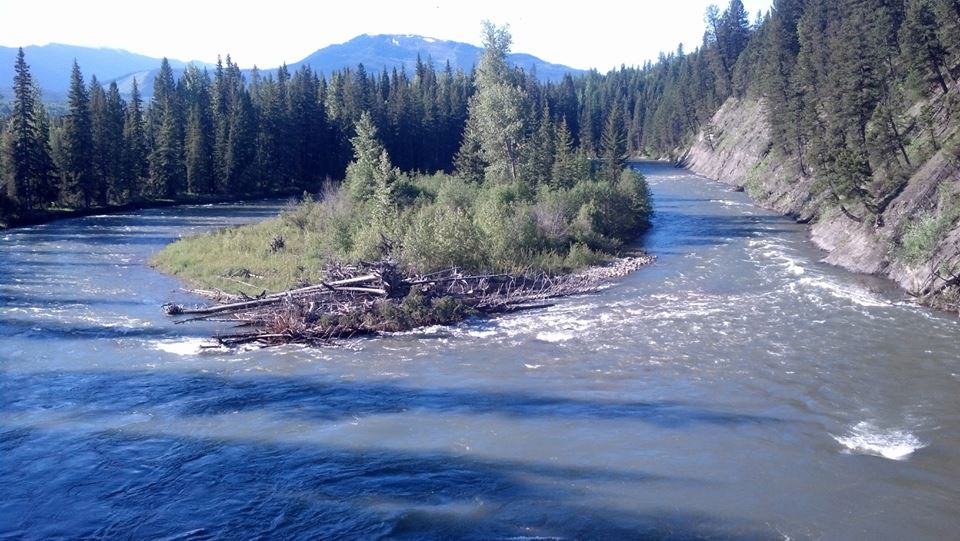 The rest of the day was no different as I made my way up and over the passes. Once the climbing was done, I rode downhill for miles and miles, mashing the big ring, passing and meeting riders along the way.

When I left Elkford that Saturday morning, I was determined to make it to the USA.  It was going to be Fathers day that Sunday, and I had an image in my mind of sitting at the Last Chance bar, sipping an adult beverage, and celebrating my return to the United States.

I made it to the Last Chance bar at 1am with no serious incidents, and had caught my friend Steve and his compatriots for the day while descending Galton Pass at 35+ miles per hour. Descending at night was so dangerous, I made the call that moment not to descend any more passes at night. While I’m a bike racer, when it’s all said and done, my main goal was to finish the route safely.

That fateful morning, after the 30 of us had made it back into the US, there was no way I felt rested: I had hammered a hard 280 miles in 42 hours getting from the start to America, with a 147-mile day the day before. I wanted to feel the energy and excitement of being in the race, but all I was feeling was the uncertainty of not getting enough sleep and another big day with lots of climbing ahead.

I ate, left, and made my way to Eureka, and then onward towards Whitefish Divide and the first big pass of the day. I knew from studying the route that it would be mostly pavement for a long while, so I stayed busy on the bike, not wasting any of that sweet hero pavement that laid ahead.

After four hours or so I started to feel like something was wrong. I felt dizzy and very faint, and decided to lie down. Soon I felt my heart beating out of my chest, and before I could grasp all that was happening, I knew I was in trouble.

I didn’t know what was happening, but I managed to get a message out to my girlfriend, and the only thing I could think of was that I might have taken too much Ibuprofen.  In 24 hours I had taken eight Ibuprofen, and that morning I took an additional four. I discovered much later they were extra strength, which only confirmed my apparent overdose. I lay there worried that I would not get better, pondering what I was going to do to solve this issue. I didn’t want to surrender, even if I died on the side of that road.

After an hour or so, I felt better. I got up and started riding again: the only side effect I was left with was a painful, searing heartburn. I felt horrible, but I kept going, taking breaks up the mountain, and resting as needed. I resigned myself to losing some serious time.

I didn’t have an appetite going up over the pass. Once I got over the Whitefish Divide, I decided to try and eat something, and it hurt so much to swallow that I gave up. I needed rest, so I kept my eyes open for a cabin or anywhere to lay my head.  I had read on the map that there was a work center ahead, and I figured I could camp next to it.

I spotted a cabin that had a forest service sign on it, but it was already rented. 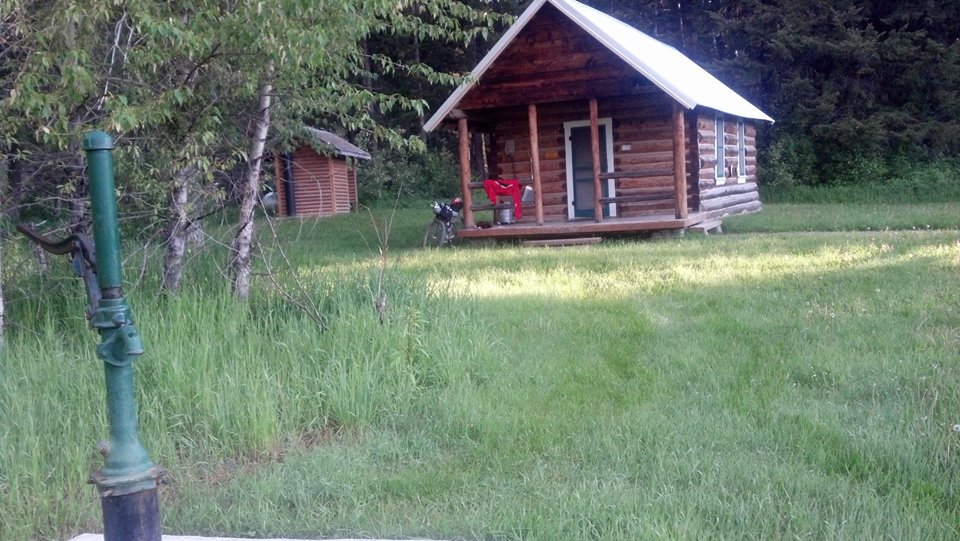 Eventually I arrived at TePee Creek and the Ford cabin, and decided to camp next to it in the soft grass. It had a water pump, a bathroom, and a nice porch. I managed to eat half the BLT I picked up in Eureka, but it was a chore. I chewed each piece like forty times, and even then it hurt the whole way down my throat.

I was asleep in my tent by 8pm. It had only been a 53-mile day, but I did my best to not beat myself up over it. What can you do? Things happen, lesson learned: I needed to move on, and I could rest up more when I got to Whitefish.

I got up the next day feeling a lot more rested than the day before.  I still didn’t feel well, but I pulled myself together and got on the bike. I started my Audible app, a book on tape titled A Walk in the Woods, and rolled out. I was climbing but feeling strong; I stopped here and there to eat some chocolate, waiting for it to melt in my mouth before swallowing.  The heartburn was mostly gone, but still lingered.

While sitting  at a bridge eating M&M’s, another rider came through. It felt good to see another person, and listening to the book had done a lot for my morale.  Hearing that human voice telling stories reminded me I was not alone, and gave me strength.

Next up was Red Meadow Pass. I even enjoyed the snowy hike and the climbing: 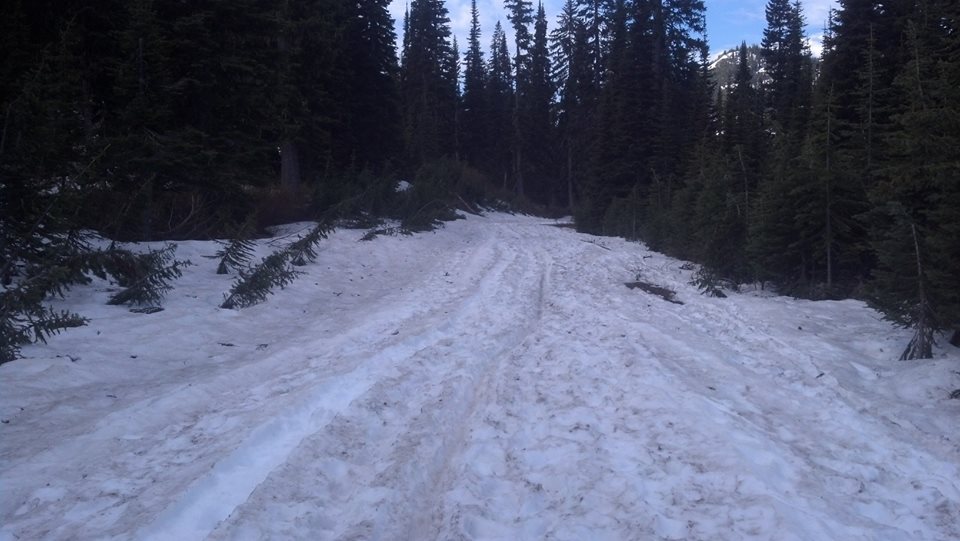 I stopped and ate more chocolate at Red Meadow Lake, and then continued up and over, knowing that it would be mostly downhill for 30 miles to Whitefish.

I started my way down the other side, and saw a jeep. Two ladies were there, and as I rode by they called me over. She started telling me about a movie she had seen the night before on Netflix about this crazy race, and the guys’ bikes were packed up just like mine was. I got to tell her that she was, at the moment, on the Great Divide mountain bike route, and that at that moment I was in the race.

She offered me the world, including her house, but I knew that would be against the rules. I thanked her, but not before both of them gave me hugs and wished me luck.  I warned them that I was very smelly, but I admit, after the day and night I had been through, fearing a poisoning death at one point and suffering all day with heartburn, it felt good to get a hug from another human being.

Some people say that the Divide is a dirt road race, but I beg to differ. It’s technical, it’s gnarly at times, and you definitely are better off on a mountain bike then on any other machine. The Divide downhills were my strong point, and I would hit them with no brakes, no worries, and no concerns.  Before long I caught up and passed the guy who I had seen earlier, and then eventually I made it to Whitefish.

I got some pizza and ate slowly, washing down my food with copious amounts of Coca Cola. I made a list of things I needed, things I wanted, and things I wanted to send home. I took care of many errands while in Whitefish, deciding ultimately to stay in town. I had developed a horrible pain in my left ankle, and I needed to wash my clothes and recollect after a hard 110 miles after leaving the Last Chance bar.

That night I went to sleep with clothes hanging all over my room and with an elevated ankle-braced leg, wondering how the heck I was gonna keep it all together for another 20+ days when so much had already happened in so little time.

Thats the magic of racing the divide. When you begin the journey, it all goes south: your mind, your body, your spirit, and sometimes… your luck as well.

While Karlos persisted for several more days, he eventually had to bow out after 9 days of racing due to his ankle.

Loved your story. I lived in the northern Montana area in the early 70’s and worked out of Ford cabin several months both summer and winter. Am familiar with the route you took and brought back old memories. Pretty remote up there. Great place to see grizzlies in the spring.

What an adventure. Thanks for sharing!