If you haven’t heard of JayP’s Backyard Series races, you’re in for a real treat! Based in the Greater Yellowstone Ecosystem, the Gravel Pursuit route travels along the Yellowstone National Park border in the Caribou-Targhee National Forest. It hugs the Wyoming border and cross in and out of the Montana/Idaho state line along the Continental Divide.

This past September (2016), I decided to go for it — the whole 120 miles, despite never riding more than 70 miles in a day. My bike is a steel Surly Pugsley Ops with 3.8″ Nates. This was also my first race. Going into it, my goal was to not just finish, but do well and compete.

The night before the race, we gathered at the Pond’s Lodge for registration, catered dinner, a pre-race talk from JayP, and a quick note about bicycling in bear country from yours truly, representing the Forest Service. Afterward, we all dispersed – some to the cabins and some to the Buffalo Campground just down the road. I shared a campsite with a friend and fellow racer along the Buffalo River.

The 7am start came fast and before I knew it, we were off. I felt strong and was riding well. I was in the top of the pack, winding in and out of puddles as wide as the road, dodging pine branches in the dark, and spinning my pedals. The road itself was like a mountain bike trail. This lasted for several miles.

Then came the open flat section. I no longer had the advantage, and it soon became apparent as I tried to stay up with one cyclocross bike after another. I tried to hang with each person, one, in particular – a guy on a singlespeed, fixed gear plus bike. He came in second: second place and in under 10 hours. Impressive. 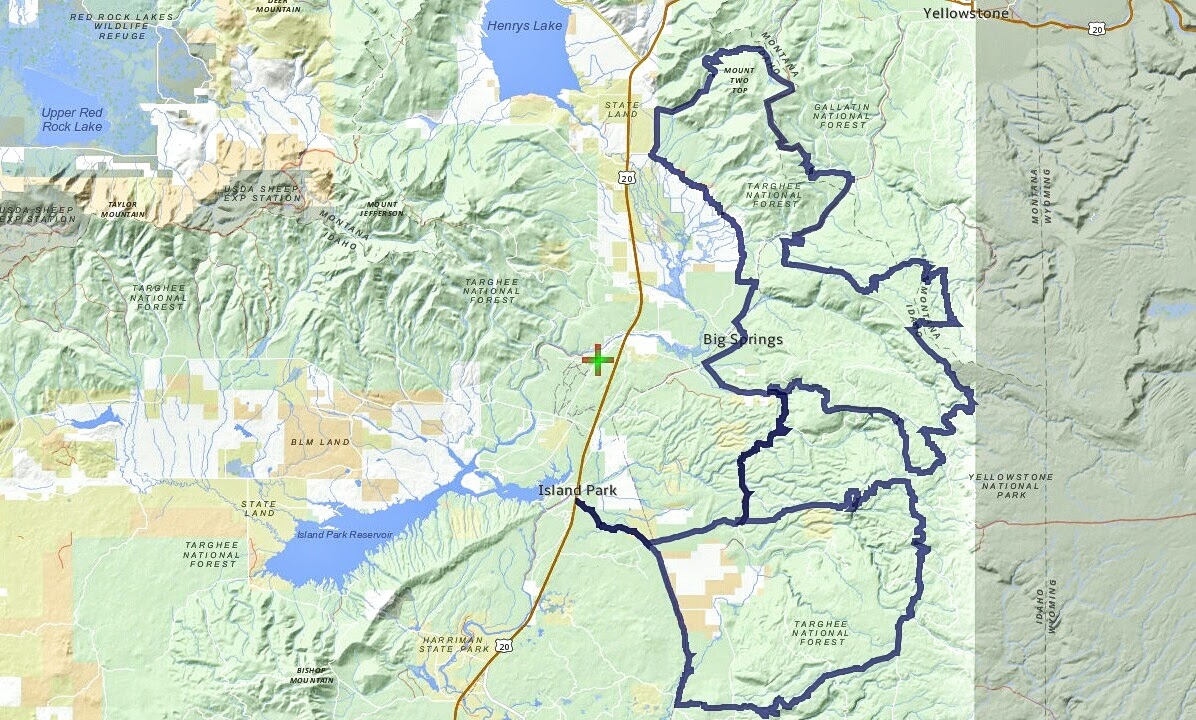 Around mile 10, another rider, also on a plus bike, caught up with me, and we passed each other back and forth as we climbed roughly 1,300 feet in 10 miles. I’d pull away on the inclines and he’d catch up to me on the flat sections, but I eventually lost him when trying to swap out my wet gloves, while continuing to pedal. My gloves got wet in the first few miles from drizzle and the occasional puddle I unintentionally hit. An early stream crossing also ensured I would pedal with two blocks of ice for the better part of the race.

For the next 10 miles, I’d push through, dreaming of the aid station so I could eat and warm my hands. This is where having never raced before comes into play. On any other ride by myself, I’d stop to cumbersomely open the hand warmers with my numb hands. Because I insisted on pedaling, I couldn’t feasibly open any wrappers.

Mile 30 came. I was so impressed with how everyone at the aid station was eager to help – filling my water bottles, adding electrolytes, opening hand warmers, handing me food, taking my trash. I swapped out my gloves again, which had surprisingly dried, and got rolling.

The 40 miles until the next aid station would climb thousands of feet, passing along beautiful deep canyons and evidence of the burn area of the Yellowstone Fire of 1988. Soon the 60-mile guys, who started an hour after the 120-milers, caught up. It was nice to get a little encouragement from them, especially the locals I knew.

We, the 120-milers, separated at an intersection where we crossed onto roads closed to motor vehicles. This is the wild backcountry of the forest. With the majority of human traffic closed off, trees have fallen and new vegetation has sprouted up all over the road. You get this “out there” feeling… out there and in the thick of bear country. Even back here, though, there were flags and markers showing us the turns to make… turns that would be so very easy to blow past as there was little indication of a trail, let alone a road to follow. I appreciated JayP’s efforts in times like these.

I spotted some bear scat and had I looked around a little more, I’m sure I would have noticed prints and claw marks with peeled-off bark from trees. With all the race traffic ahead of me, there was little chance I’d see anything, but my guard remained high.

Here I crossed into Montana for 5 miles. I remember being amazed that there was actually a sign indicating such, as well as a speed limit sign higher than normal, but appropriately placed for snowmobilers.

I crossed another gate, exiting the road closure area and getting back on “good” roads. Another rider, this time the only woman in the race, was right behind me. As we descended, she managed to put some distance between us on her cyclocross bike. Are you seeing the trend here?

The 8 miles of downhill was much-appreciated and rejuvenating. Mile 70 came and so did the second and final aid station. I came in right at the cutoff time – 3pm. I refilled water and sipped a cup of miso soup. Yeah, you read that right. Initially, I didn’t think it sounded appetizing, however they insisted, and it was delicious. Plus, the sodium was exactly what I needed. 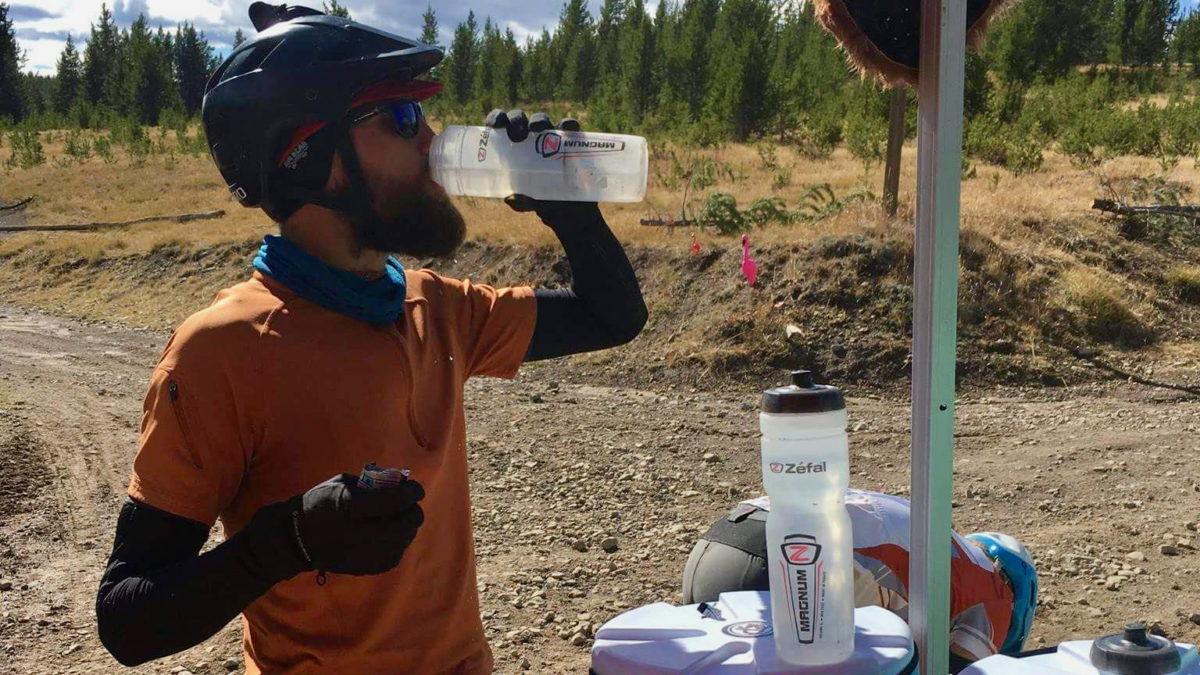 I left the aid station feeling ready to tackle the next 50 miles, which could have been due to my feet finally being dry and warm. I wouldn’t see another rider for the rest of the race.

I had now officially pedaled more in a day than I ever had before, and now I had to climb 1,300 feet in 8 miles. Not terrible, but when it’s rutted out ATV two-track, that you’re intermittently pushing your bike up, it’s draining. Crossing in and out of Idaho/Montana along the Continental Divide, I pedaled when I could and pushed/ran up the rest. Finally, at the top of Two Top, I stopped to take a photo. I didn’t take too many pictures on this ride, which is out of character, but being at one of the highest points in the race at over 8,000 feet with a gorgeous view of Island Park and the Centennial Mountains, it was just the reward I needed.

The descent was no different than what I climbed up. Large rocks and deep ruts littered the two-track trail. Then suddenly the route directed me through a mostly clear, but off-trail section, climbing over logs and through twiggy vegetation. My Pugsley and I are back in our element: these are the sections we thrive in. I came to a clearing and overlooked a large, boggy wetland: our next destination.

The drop down into the meadow was steep and sketchy. After setting aside the idea that I would ride across the narrow planks, I attempted to balance and roll my bike through the boggy madness. I still slipped and got my feet wet. So much for those dry, warm feet.

After getting back to the gravel road, there was a stretch of mellow, windy roads, which was a nice break from the steep ups, downs, and constant change in terrain since leaving the second aid station 13 miles ago. Even the climbs were short now, and soon I descended another 1,000 feet, cruising down Two Top Road, hardly wide enough for two vehicles, cut into the side of the mountain.

I had reached mile 90, with only 30 miles left to go. Much of the rest of the route followed open roads, passing through a mixture of public and private land, even passing by cabins and summer homes. This was pedal-spinning time, and again where many of the cyclocross bikes had an advantage.

The sun dropped as I rode through Big Springs. There were a series of intersections again, but I was surprised at how natural the route felt. In addition to being marked, the turns just felt natural, which in low light was nice. It’s hard enough to keep an eye out for wildlife, make sure you’re eating and drinking enough, and swap layers while pedaling. Not having to constantly check a map or GPS is nice. 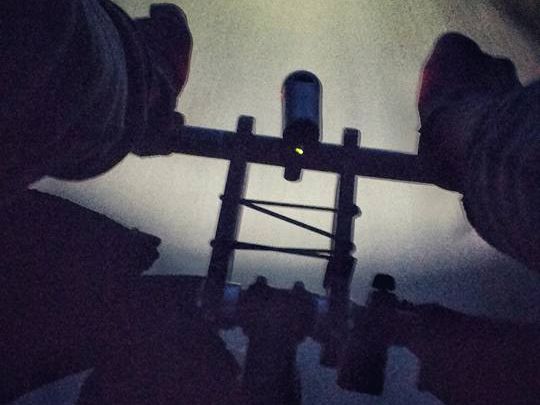 I got into a groove, turned on some music and spun my pedals. I wondered how many people were behind me, if any. I wondered if anyone would be at the finish line. I had no idea how many people were in front of me, but I sure felt like the last one. Soon I was back on a familiar road – the one we started on – zipping in and out of puddles, but this time not quite as carefully. The end was near!

I came around a corner to see the big Gravel Pursuit banner lit up with lights, and cheering ensued. As I came cruising in, I heard someone shout “Aaron, is that you?!” Wow. Not only were there people still waiting, but someone even guessed who I was!

I did it. I biked further and harder than I had ever previously managed. My feeling of relief and excitement can be seen in my finishing photo:

I was asked about another guy out there, and if I had seen him. Low and behold, I wasn’t the last one! He came in 22 minutes after I did. Out of the 20 racers who started, 16 finished. I came in at just under 13 hours – 12 hours and 56 minutes. Needless to say, I got a great night’s sleep in my hammock!

The winning time was set by a local and a good friend at 9 hours and 17 minutes.

If you’re looking for an adventure and an incredible personal milestone, I highly encourage you to check out the Gravel Pursuit race for 2017 – you’ll be challenged, but you won’t be disappointed!

Thanks! JayP does an awesome job.

Wow, awesome accomplishment Aaron — the word awesome being appropriately used for once. Very inspiring, and a great write up too. Going 50 miles over your longest distance to date is just flat out impressive. This seems like such a great capstone accomplishment to all the training you did last year. Truly rewarding, I’m sure. I think the best photo in the article was that of man, bike and hammock. =)

Aaron, I notice in the description of yourself that you are working in wildlife research and rehab. Am I write to assume that the rehab is habitat rehabilitation? Is that correct? I would love to talk sometime about your work.

Thank you! 50 miles over my longest distance, which was set in the same week 😀 Sometimes I wonder about myself…

Yes, I am focused on that and interested in habitat rehabilitation, but even more interested and focused on wildlife rehab… such as a bald eagle caught electrocuted by power lines.

I’m on all the social media platforms — look me up and we’ll chat!