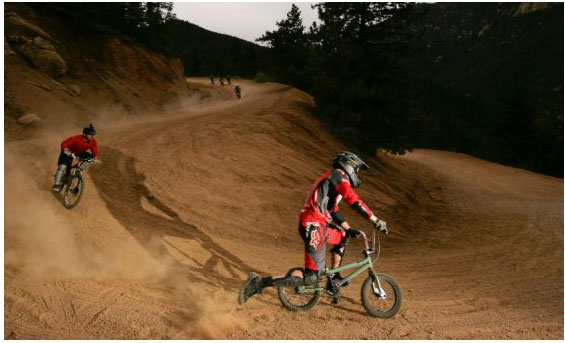 How have I not heard about this before? According to an article in the Colorado Springs Gazette there are pixie bike races all over the US every year, including pixie races at the US Air Force Academy and Stanford University. For the uninitiated, pixie bike races involve adults riding kids bikes in wanton disregard for the latest and greatest in bike technology. The rules are generally simple and require that riders use bikes with wheels 16″ or smaller in diameter with an appropriately sized frame.

Anyway, the Gazette article was about the Pixie Repack race that was held in Colorado Springs earlier this month. Racers careened down High Drive into Bear Creek Canyon on the tiny bikes and seemed to have a blast despite some nasty wipeouts. For those who don’t know, High Drive is a steep gravel road that’s only open to one-way vehicle traffic during the summer months and from the top it’s more than 1,000 feet of descending to the pavement. The sweeping turns and loose gravel make this a pretty gnarly course and it sounds like few of the pixie bikes survive the plunge. The Pixie Repack bike race is particularly interesting because it isn’t part of a larger mountain bike race or festival like the pixie races held at Downieville each year – the Pixie Repack in Colorado Springs is an event unto itself.

Obviously pixie bike races are just for fun but in some ways they point to the movement within the mountain bike community toward simplicity and comraderie over competition. Just as mountain bike pioneers like Gary Fisher and Charlie Kelly raced their clunkers down Mt. Tam in Marin County, the pixie bikers may just be onto something new. Or they could be completely crazy, only time will tell 😉

[…] San Francisco Bicycle Expo and Swap November 29-30: rideSFO is hosting the first annual SF Bike Expo and Swap at the Cow Palace and it sounds like a mini Interbike that’s open to the public. Exhibitors include everyone from bike manufacturers, eco-friendly vendors, bike shops, teams, and advocacy groups. Events like demos, pixie bike races, and raffles will take place over the weekend which should make this a great event. Might be a good chance to pick up a sweet mountain bike for cheap… […]

[…] 400-racer-strong Mega Avalanche downhill race held in France each year. We were also introduced to Pixie Bike Racing and are stoked to try our hand at it – if we can only find a 12-inch bike that won’t […]