Imagine this: It’s the 1970s and 3 cops are on the roof of a Brooklyn apartment building chasing a frantic jewel thief. The thief runs to the edge of the building, bag of jewels in hand, and looks over the side – 5 stories down. As the cops close in, the thief turns toward the edge and leaps across the gap to the slightly lower adjacent building – running through clothes lines and rooftop antennas as the cops give chase. Now imagine that the cops are bike cops and the thief is bunny hopping rooftop to rooftop – crazy idea, right?

But that was pretty much the scene at the first annual Avoriaz Roof’n Slopestyle (minus the cops and robber of course). Over 10,000 spectators watched as 30 mountain bikers took part in the rooftop competition at this French ski resort. This event is the first of its kind but the idea seems like a good one since it makes use of sloping areas (roofs) that are widely available but often underutilized. A new form of urban mountain biking? We’ll see. Check out the photos below (all photos from Black Market Bikes). 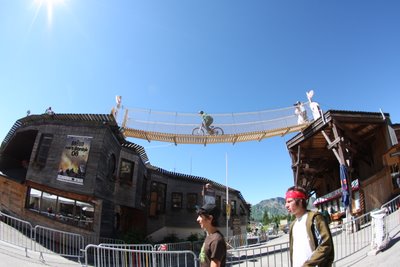 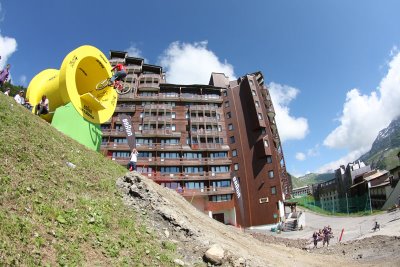 I knew it had to come some time,parkour mountain biking.hahahahaha.How many of you know what parkour is?????I bet the trial’s rider’s will eat this up big time,heck,they already do but to actually call it and do it like “mountain biking parkour” is somthing else all together.I think it is really coooool man.