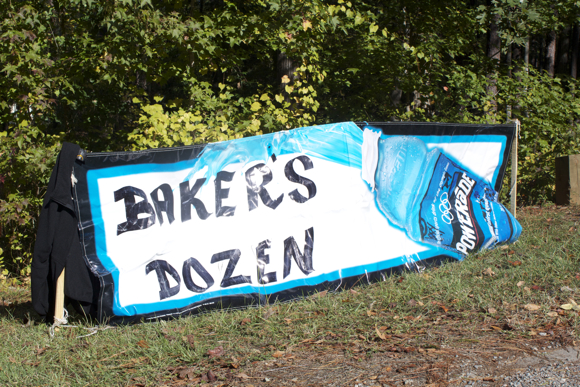 This weekend Singletracks took third place in the a 3-person team division at the Baker’s Dozen 13-hour race at Lick Fork Recreation area near Edgefield, SC. The weather was picture-perfect and Greg, Dustin, and I had a great time taking laps around the 6-mile Horn Creek trail loop. Our strategy was to take 2 laps each (about 16 miles total) to minimize transition times and maximize rest (read: eating and drinking).

The race start at 9am was a bit chilly and I volunteered to take the first two legs. Everyone lined up for a standing start and when the siren went off I found myself near the front of the pack racing down the gravel road. I didn’t have a chance to pre-ride the course like Greg and Dustin so I was really surprised when I hit the first section of singletrack: roots, roots, and more roots. Ok, so it wasn’t that bad but that first, slightly downhill section seemed to suck the momentum right out of me.

Since this was the first lap it seemed like everyone was going for broke and admittedly I was feeling antsy as well. After about a mile I could hear another rider getting close to me and soon after he asked if he could pass. I replied “go for it” and moved over to give him some room to get by. I didn’t slow down at all and clearly he didn’t have enough gas to blast by me very quickly. We came to a narrow, broken bridge where I re-took the centerline and the other guy fell back. After the bridge I slid to the right side of the trail once more and yelled out “Go! Go! Go!,” frustrated that I was riding in the rough and that he hadn’t passed me already. He eventually made it past but I ended up passing him back once we got to the first extended climb on the singletrack. 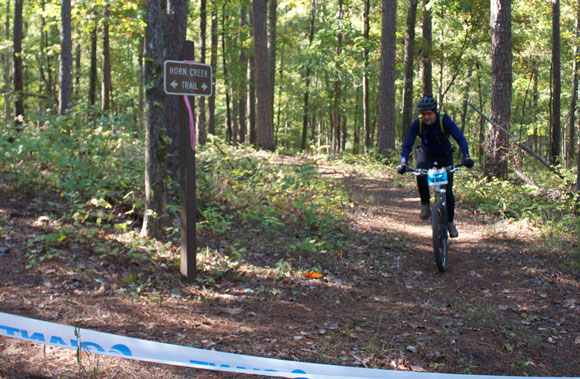 At about the 2 mile mark the Horn Creek trail starts a nearly 1-mile, gradual climb. The ascent tops out in a clear-cut area and begins descending with a series of sharp turns that seem to come out of nowhere. Again, a pre-ride would have been very helpful to me! At times I was able to get into a flow on the descent and started having a little fun but I still hadn’t found a rhythm. After the descent the trail bottoms out for what seems like miles and the roots start to multiply. At about the 5.5 mile mark there’s a switchback climb that skirts the back side of the start/finish and pit area. By the top of the climb my lungs were about to explode and I was relieved when I finally hit the gravel road leading back to the finish line. Still, I had one more lap to go. 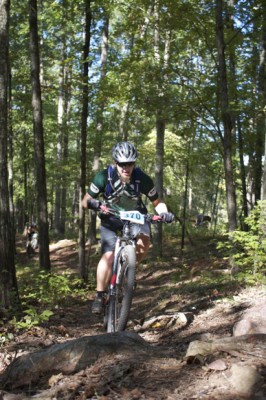 It wasn’t until the middle of my second lap that I felt like I really got into a rhythm on the bike. Still, I was exhausted and my second lap was slower than my first. In fact all three of us followed the same pattern: fast first lap, slower second lap. Thanks to the frequently updated race results provided by Dirty Spokes, we recognized that our 2-lap-at-a-time strategy wasn’t ideal. The teams in front of us appeared to be doing a one-and-done rotation so after lap 12 we made the switch to single lap pulls. At least mentally it made all the difference in the world to me and I turned in my second fastest lap of the day on lap 13.

Everything went well during the daylight – no crashes or mechanical issues. It seemed like we stayed in third place for most of the day, though the fourth place team briefly passed us at one point and were within minutes of us most of the time. It started getting dark during Greg’s lap 14 and as Dustin and I waited in the transition zone we saw a rider in the distance that seemed to be running with his bike down the gravel road. Sucks for that team, we thought (we heard there was a rider with a broken derailleur coming around and figured that was him). But it turned out to be Greg! Somehow his chain went off the big ring and got jammed between the crank arm and chain ring and he had run and coasted almost the entire way down the road (at least half a mile). Even with the minor mechanical issue it was one of Greg’s fastest laps!

By the end of the race we had our transitions down to a science thanks to Dustin. The timing anklet had to be handed off between riders so the guy who wasn’t riding would stoop down to take the anklet off the guy who was finishing, then attach it to the guy who was going out. Even after 16 laps we were still hustling through the transition area, not slowing down all!

After my night lap there was just over three hours left on the race clock. The deal was you had to be back before the 13-hour mark or your lap wouldn’t count (unlike some races where you just have to start your last lap before the clock winds down). I had done six laps and Greg and Dustin had ridden five each so if Greg did his lap in 45 minutes or so we would have just enough time for Dustin to take his last lap. At that point it wouldn’t make a difference in the standings if we took an 18th lap (though admittedly Greg and I weren’t so sure about that) so when Greg came in at 45:11 Dustin and I were stoked! Dustin had already changed out of his racing clothes since he was doing double duty as a race volunteer but Greg and I yelled “You gotta go for it!” Somewhat reluctantly Dustin stripped down to his shorts and jersey (it was getting chilly at this point) and finished his final lap just minutes before the 13-hour mark. Epic! 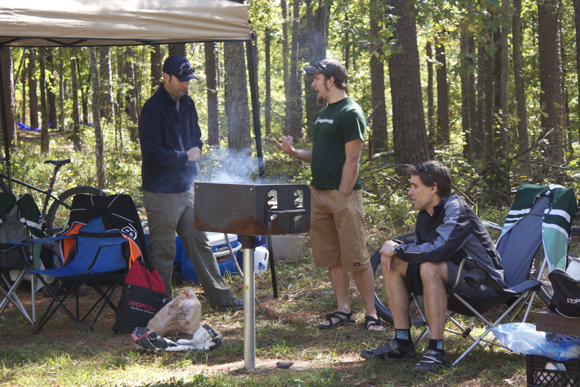 Everyone had a great time at the race and we all enjoyed hanging out between laps. GoldenGoose stopped by for a bit and we also got a chance to talk with flamingotter before the race (he was riding solo – crazy!). Garvin from Ibex was out there as well taking pics and looking after the demo bike Greg was racing.

This video has not been doctored in any way but WAS edited to make me look good. 🙂

As for our friendly competition, I ended up with the fastest average lap time but that’s probably because I took those first two adrenaline-fueled laps. Dustin rode two night laps which were slower for everyone and Greg had his mechanical mishap on lap 14 so all things being equal, we were well matched as a team. It was an exhausting 13 hours – we each rode almost 50 miles – but we’re all stoked to do it again next year!

That was a fun day! Next time we do 1 lap per turn, lesson learned this time I guess. But one correction – you finished your last lap with a little less than 2 hours on the clock – Greg and I knocked out the last two laps in an hour and a half and only had 5minutes to spare.

The race was a lot of fun and was glad to get a chance to meet the guys on the Singletracks team. I rode solo and came in 5th after riding only 7hr 17min with 6 laps. I was having quite a bit of pain in my knees and decided to call it quits. I agree with trek7k the roots were a relentless. Did anyone else want to rip the 2.0 mile marker out of the ground? It was breaking my heart every time I saw it, even though I knew I was further along. I had a really great time and will definitely be out there again.

Jeff, the way you rode last Tues, I knew you’d be the fastest. Nice finish…24 hr next? (13 does seem like a nice number tho)

Trek7k, you lost momentum doing downhill? I’m jealous, I usually have too much! 😀

Great write up! It was an awesome day on the trail… I can’t wait to do it again next year!

Wish I was there… Congrats.. Sounds like you guys had a great time.